Best-known for her sculptural and interactive later works, a survey of the first decade of the Brazilian modernist’s practice reveals her as a multifaceted, quicksilver painter 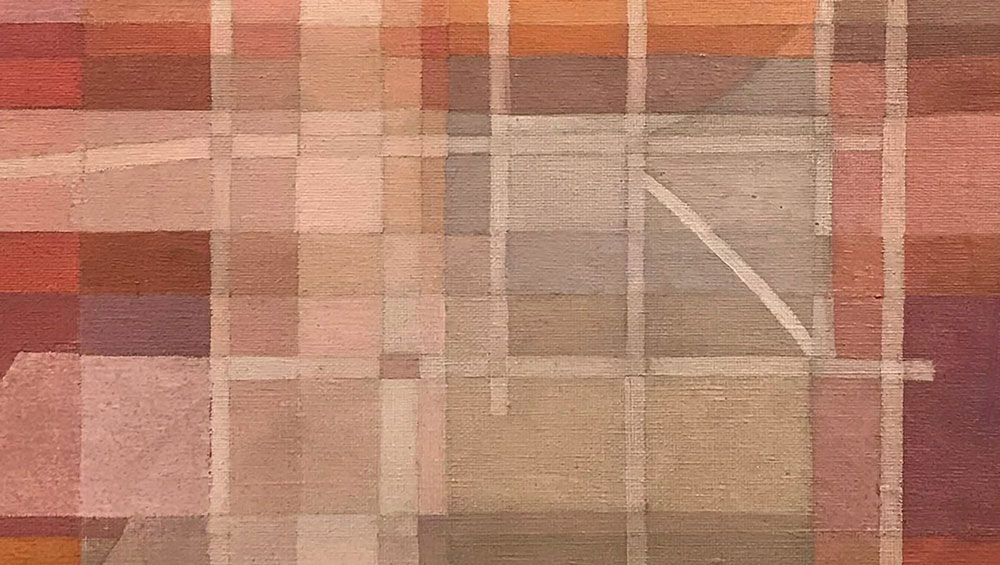 Lygia Clark (1920-88) is a tricky artist to pin down. In a career stretching across four decades, the Brazilian modernist tackled medium after medium, her practice always shifting in tandem with her intellectual concerns. “More than any other modern artist,” wrote the Centre Pompidou’s chief curator, Christine Macel, in 2017: “Clark resisted categories and divisions to such an extent that her work defies definitions.” She produced figurative and abstract paintings, interactive metal sculptures, “propositions” in which spectators helped to shape the work, therapeutic tools including wearable animal masks, and an environmental structure simulating the experience of birth. In later life, she abandoned creating artworks almost completely and became a pioneer of art therapy. 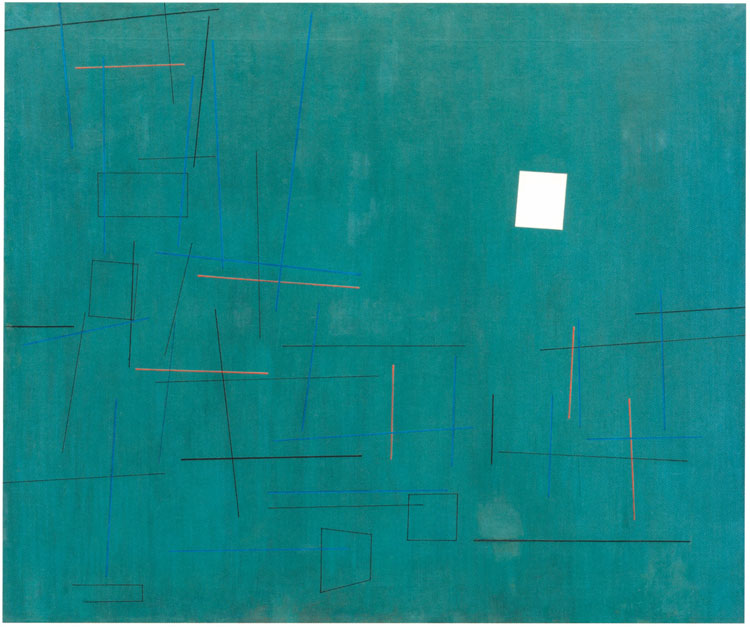 A new exhibition at Guggenheim Bilbao, curated by Latin American specialist Geaninne Gutiérrez-Guimarães, narrows its focus considerably. Painting as an Experimental Field: 1948-1958 zooms in on Clark’s first decade of artistic production, when she focused on painting and drawing. Marshalling 83 works over three voluminous galleries, it offers a comprehensive view of its subject.

Even in this 10-year stretch, Clark’s practice evolved at a breathless pace. She came to art, if not late, then after a lot of life: a wealthy childhood in Belo Horizonte, an abusive father, marriage at 18, the move to Rio de Janeiro at the height of its glamour, three children by 25. The earliest work on display, a pastel of the pianist Angélica de Rezende from the late 1940s, is an unexceptional bourgeois portrait, demonstrating little of what was to come just a few years later.

In 1947, Clark trained informally under Roberto Burle Marx and Zélia Salgado, two members of Rio’s left-leaning bohemia, and, under their tutelage, quickly took a turn towards the avant garde herself. A gouache of 1948 shows Clark imagine a domestic interior as bands of colour. But her first distinctive style began to form in 1950, when she moved to Paris. There, she was tutored by Fernand Léger and Årpád Szenes. 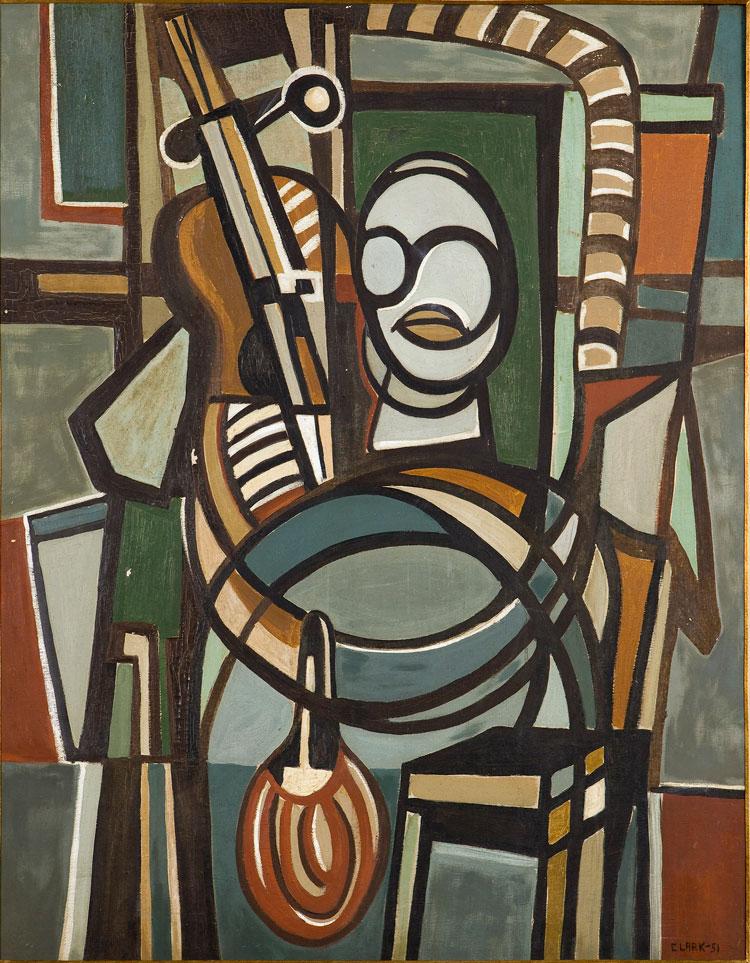 Clark almost immediately absorbed Léger’s chunky, motley brand of cubism. The Violoncellist (1951) places that favourite cubist subject, a stringed instrument, in the hands of a characterful, but vastly simplified figure, defined by lips and a monocle. Another oil on canvas of the same year transforms a Parisian apartment stairwell into a stained glass-like dance of colour and light. 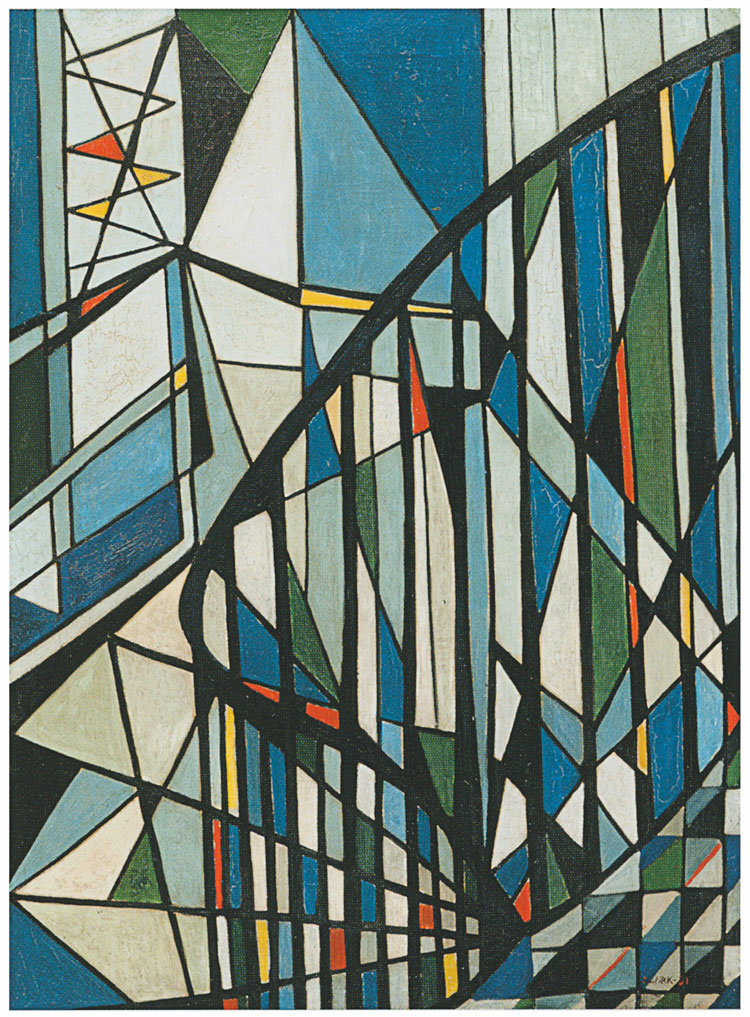 Stairwells were a recurrent element in Clark’s early work, and the seeds of the painting of 1951 can be seen in a more clearly representational version of 1948, where Clark nevertheless divides her view into fragments with thick black lines. Architecture, exterior and interior, is a thread that ducks and weaves throughout the exhibition. In 1952, shaking off Léger’s influence, she began to abstract further. A selection of untitled paintings from this year shows Clark leaping into increasingly complicated abstractions, which nevertheless seem drawn from visual experience. Four contemporary graphite drawings, also without title, depict floating architectonic forms.

The year 1952 was a significant one: Clark had her first solo show in Paris and returned to Rio. The following year, she divorced her husband and immersed herself completely in the then Brazilian capital’s insurgent experimental art scene. In 1954, along with others including Hélio Oiticica and Lygia Pape, she formed Grupo Frente (Front Group) and vowed to renounce all representation in favour of pure geometric abstraction. In some hands, such stringent rules could be restrictive and deadening; in Clark’s, it is joyous, liberating and sometimes revelatory. 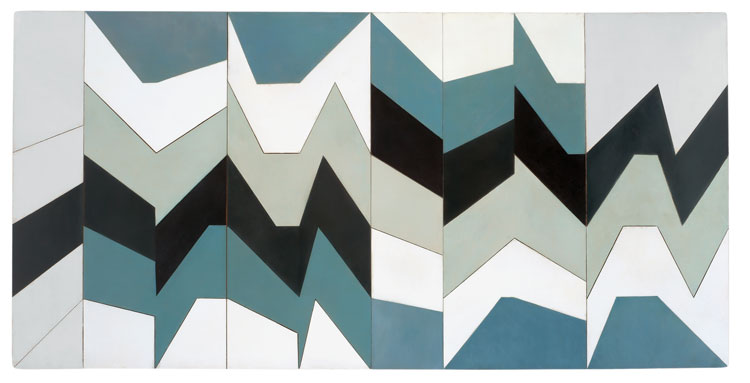 I am not convinced that Clark followed the movement’s strictures to the letter. Many of her works during this period were named Superfície Modulada (Modulated Surfaces). “Surface” carries the implication of a solid plane, something that exists beyond the merely pictorial, and Clark’s abstracts often seem to draw from lived reality. Sometimes that reality is horticultural: more than as a painter, her early teacher Burle Marx was acclaimed as a landscape designer, and it is not hard to detect an echo of his rigorously designed gardens in several of Clark’s abstracts. 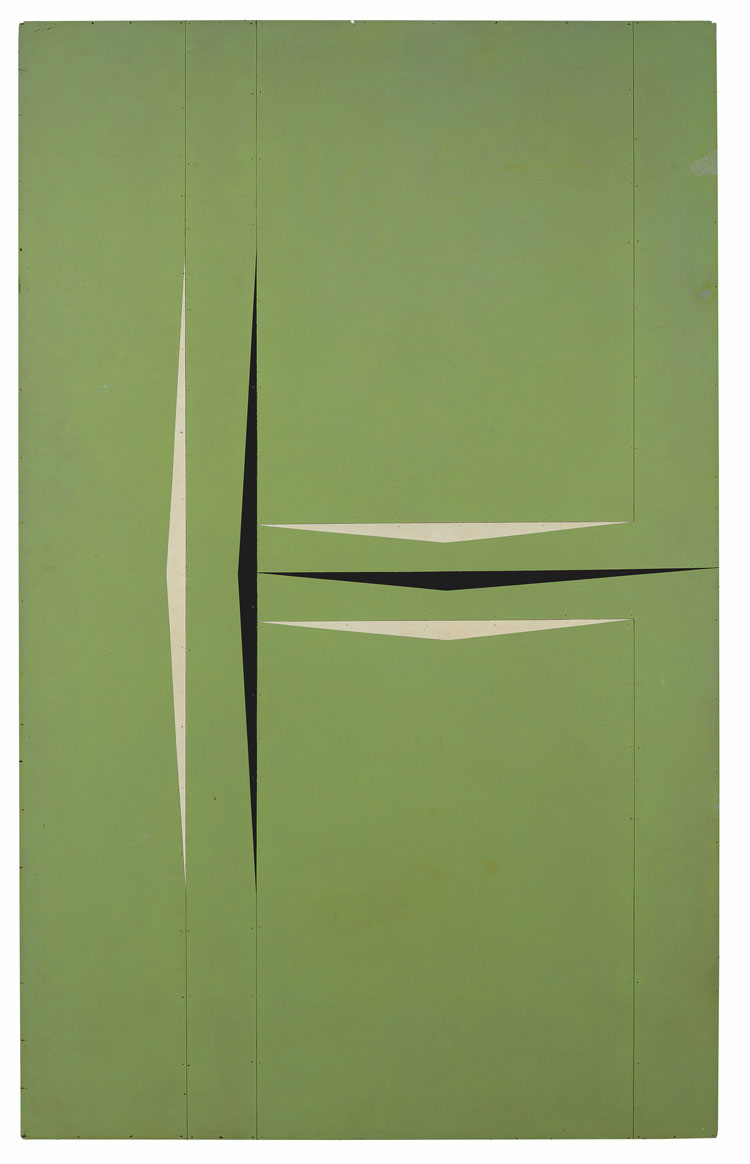 A 1953 composition restores the non-primary colours stripped away by Piet Mondrian, specking its tightly laden grid with verdant greens. By Modulated Surface No 5 (c1955), the grid has been supplanted by a hedge-green field, interrupted only by five emaciated triangles – three white and two black, three horizontal and two vertical – that resemble the purest form of a Lucio Fontana slash. Even here, though, Clark’s work seems suffused with the glow of a tropical garden, tranquil and buzzing with life all at once.

Other Modulated Surfaces variously resemble radio waves, crystals and architectural cross-sections, rendered in the full colour spectrum. A trio of works from 1952, 1955 and 1957 show simple geometric forms tessellating into complicated, irregular patterns. They would mesmerise as prints on textile or wallpaper. Her interest in architecture, meanwhile, reached a new plateau in 1955, when she designed a trio of maquettes depicting interior spaces whose walls and furnishings are entirely crafted from her paintings. One particularly exquisite example from a private collection sees a painted panel slide out to serve as a bench. 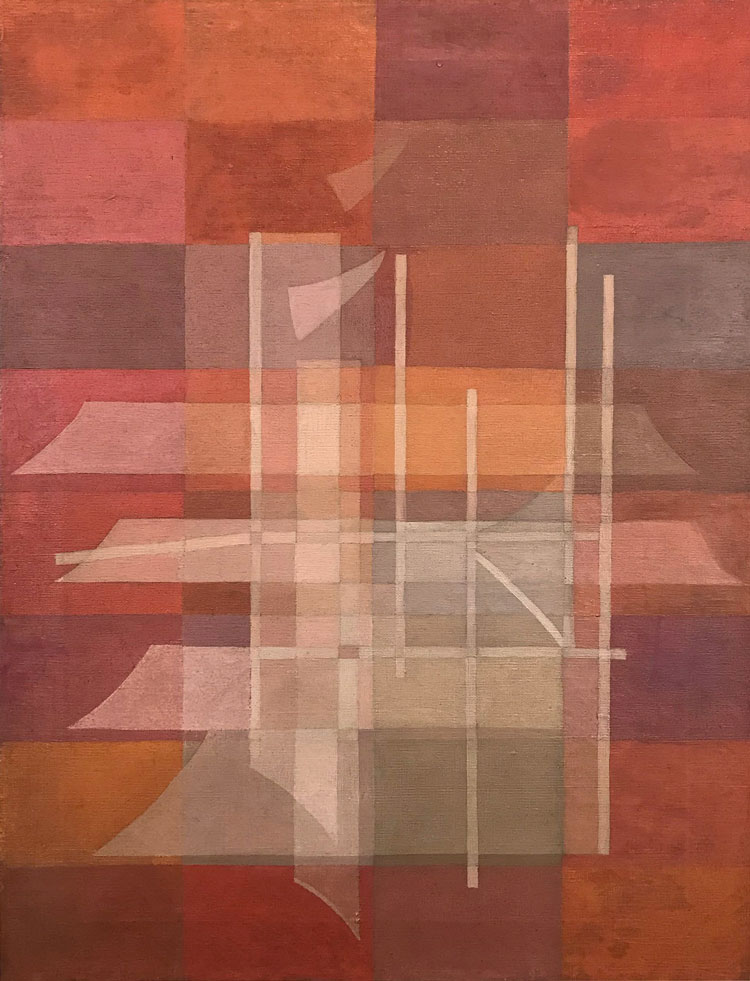 That year she also began to forsake traditional oil for industrial paints, and started painting on wood rather than canvas. Her engagement with architecture expanded into a wider investigation into the material properties of her output. The turning point in this regard came in 1954, with the pair of works at the Guggenheim named Breaking the Frame. Although they serve pictorially as stripped-down geometric abstractions, they see Clark beginning to treat her artworks as something other than paintings. One features a block of wood inserted into a hole in the centre of the canvas, transmuting the canvas into a sort of frame. Clark painted on the side of these works, so that the side protruding from the wall was as much part of the work as the front. A disruption of the picture plane, they show an artist bristling against the limits of her chosen medium.

These limits are pushed to breaking in the final section at Bilbao, which gathers three series of works executed between 1957 and 1958. Known variously as Modulated Surfaces (again), Modulated Spaces and Planes in Modulated Surfaces, they saw Clark halt the rich interplay of colours that had defined the prior half-decade. Smaller than much of her previous work, they are almost all black and white. This stark dichotomy allowed Clark to figure her works in terms of positive and negative space. Methodically working through different configurations of shape to a quietly hypnotic effect, Clark imitated folds and bends, depth and volume. 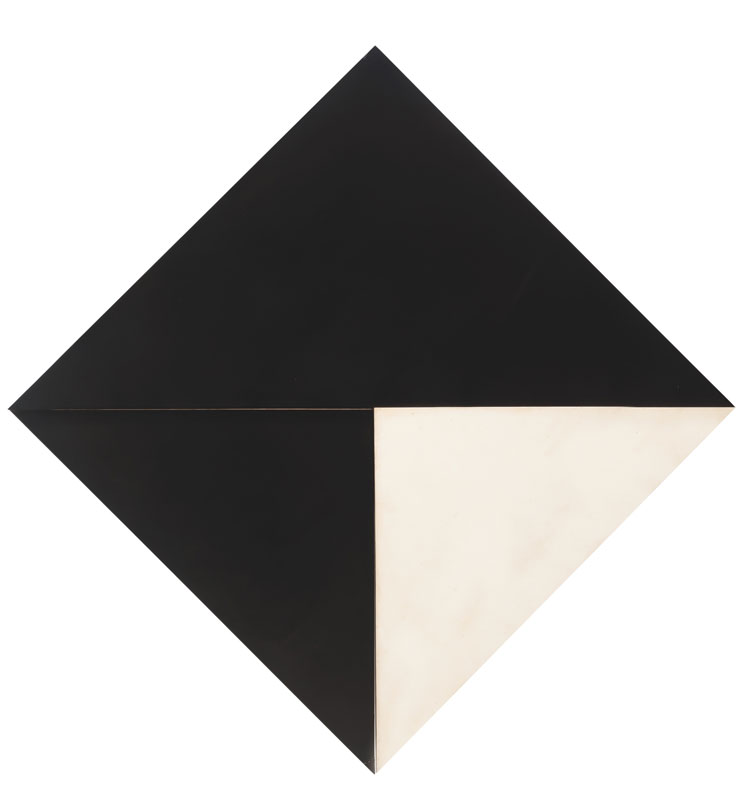 The exhibition concludes with one of its most visually straightforward works. Counter Relief (1959) is a square tilted diamond-ways, with a single white triangle calmly passing out of its largely black surface. Viewed laterally, it is revealed as a relief with three different levels of thickness.

We have come a long way from the busy, vibrant abstractions of the mid-50s, and even further from the Léger-esque. Clark would soon travel further still: she was one of several Grupo Front members to sign the Neo-Concrete manifesto in 1959, which rejected the apparently objectivity and impersonality of geometric abstraction for a metier that would bridge art and life. She would never paint again. Painting as an Experimental Field demonstrates that Clark had already found a way to imbue abstraction with subjectivity. As significant as these later works would prove to be, it makes one wonder what would have emerged had Clark the painter stayed the course.