Bill Viola’s strength is in using the video camera to get under the viewer’s skin, peeling away what we think we know about reality. But now, it seems, he has been seduced by the technology of the medium, to the detriment of his explorations of pure experience 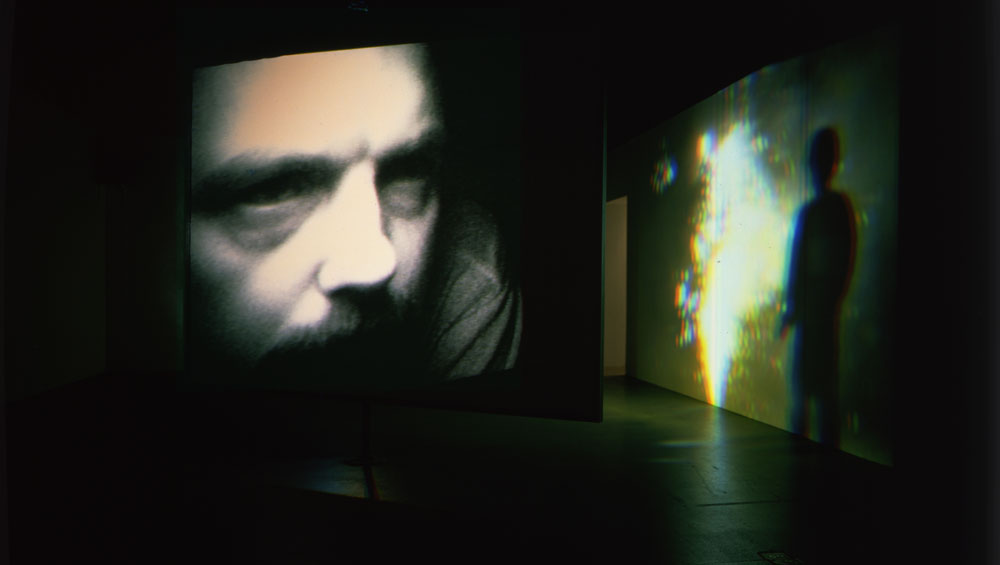 Bill Viola has, at various times, been described as “the Rembrandt of the video age” and “a master of overblown, big-budget, crowd-pleasing, tear-jerking hocus-pocus and religiosity”. Whichever end of those polarities you find yourself at, there is evidence to support both viewpoints in this new retrospective at the Guggenheim Bilbao.

When, in the early 70s, Viola (b1951, New York) chose video as his medium at Syracuse University few saw its potential as an art form. For him, the attraction was its power to examine the way we present our selves. “It was not just a matter of pointing [the video camera] at something,” he told the Guardian’s Nicholas Wroe in May 2014. “It was about self-knowledge, and (how) the camera could fracture the self. You realise there are two dimensions: what you see and what you feel, and that was a huge area to explore.”

We have seen a glut, in the past decade, of video artists playing with video technology to replicate, reproduce or reinvent “what we see”. But for me, Viola’s strength has always been in his ability to use video to make us feel. This is shown most vividly, in this, the latest of several retrospectives, in the early work. For me, the power of these films comes from his very lack of interest in the camera’s ability to render an approximation of superficial reality. Rather, he uses it to get under your skin; to provoke a reaction to everyday scenes and scenarios in a way that makes you feel intensely disturbed and viscerally present. In the fractured realities of The Reflecting Pool (1977-79), the very grainy, analogue rendering of this ordinary forest pool is made eerie through its split-screen presentation: action and reaction (a person and their reflection, a dive-bomber who never lands but is frozen in mid-leap) are divorced from their usual sequence. Through pinning you in place to ponder these visual non-sequiturs, he induces a kind of forensic peeling away of what we think we know about reality.

The same is true of the other notable work from the 70s, Four Songs (1976), which includes Truth Through Mass Individuation. Here, Viola crouches on a boulder at the edge of a river, with a bridge in the distance. During the video’s 10-minute duration, the film cycles through an entire day, with the figure present throughout, until his final leap off the rock and belly flop into the water. But the impressionistic properties of the film, its inexact renderings of light, colour and texture, force you to pay attention; you are somehow compelled to watch every single shift of light and texture, mining this simple scene for its contemplative riches. 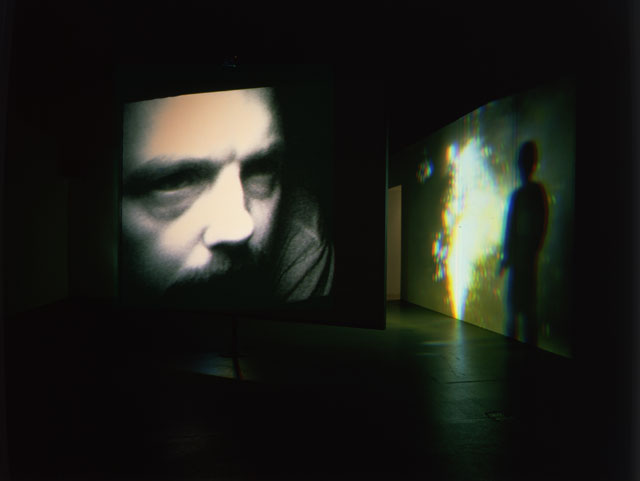 For some reason, there is nothing from the 80s in this show, but we are moved swiftly on in the Guggenheim’s chronological sequence to one of Viola’s most fertile and expansive periods, the 90s when the raw emotionality of his work intensified, following the death of his parents. One of the most powerful works in the show is his Slowly Turning Narrative (1992), an installation that features an enormous horizontal screen, mirrored on one side, plain on the other, rotating in slow motion while two projections bounce off the screen and on to the walls. Scenes of the ordinary and the extraordinary flash past – a circus carousel, a live heart operation – interspersed with Viola’s black and white, spectral face; all the while, his voice calmly intones a list of endless actions – “the one who eats, the one who sleeps, the one who drives” and so on – as the mirror flings the viewer’s reflection into this spinning carousel of life in all its chaos and splendour.

Another highlight is Heaven and Earth (1992): two stripped-down video monitors are poised, vertically, just centimetres from each other; looking down is the face of his mother filmed as she lay in a coma, close to death, contemplating the upturned face of his squirming, newborn son. We also have The Veiling, his Venice Biennale piece from 1995. Nine thin layers of voile hang from the ceiling in one semi-translucent block, while nocturnal scenes of a man and a woman are projected from opposite sides; their images never overlap, but rays of reflected light intertwine within the fabric.

But here, also from 1995, we have The Greeting, the first of his “conversations” with old masters and the first work in which he moves from immersive pieces that demand the viewer create their own interpretation to filmed sequences where the narratives are rehearsed and played out by actors. 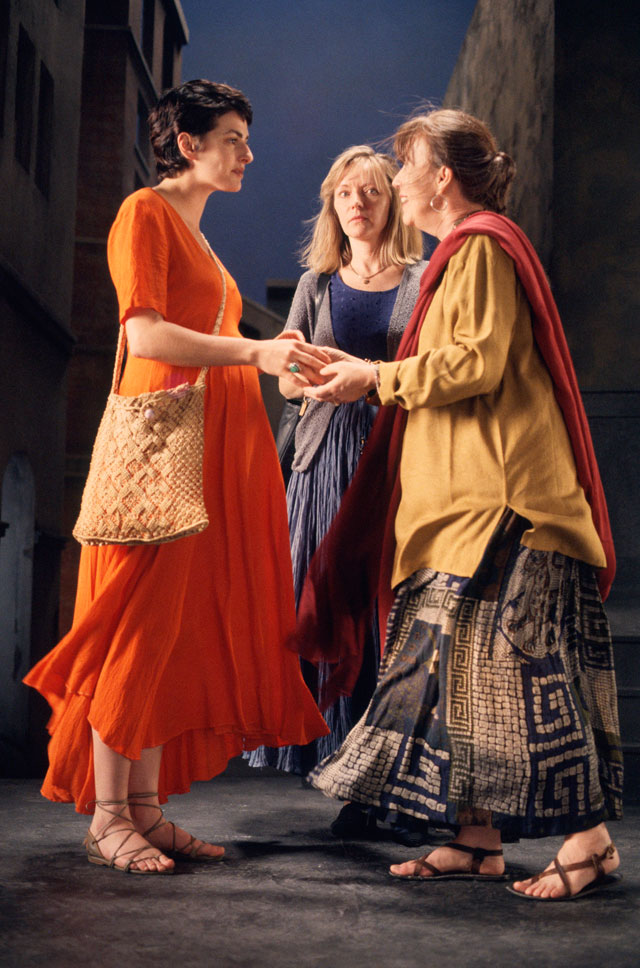 Although many have eulogised their power when viewed in the same location as, or next to, the originals, whether in church or gallery, I found myself underwhelmed by the fact that here was a live “version” of Pontormo’s C16th altarpiece, The Visitation. Yes, it is an authentic-looking classical setting, and the women are wearing suitably flowing, albeit quasi-contemporary garb. For me, there was no special poetry in the agonisingly slow reproductions of their facial expressions or gestures, the wafting of a robe or shift of a sandalled-foot; it looks and feels fake - like a slice of reality TV at its most dreary, where two people you neither know nor care about greet a friend in whom you have zero interest. There is no comparison with the passionate intensity with which Pontormo painted his devotional piece.

Technically brilliant they may be, but with these works – and many that follow – Viola’s interest seems diverted to the seductions of contemporary video technology, its brilliance in reproducing super-realistic colour, flesh-tones and light, and away from his earlier, less sentimental explorations of pure experience.

In a 2004 Studio International review of Viola’s The Passions (in response to various old masters, including Christ Mocked, 1490-1500 by Hieronymus Bosch) at London’s National Gallery, Dr Janet McKenzie quoted critic Charles Darwent: “The making of a predella panel inspired (and continues to inspire) a kind of awe in the viewer which the making of an LCD screen just does not do. Merely grafting the one on to the other isn’t going to rekindle that awe. When Viola does this most slavishly, the results are so kitsch as to make you blush.”

There are still gems in these mid-90s to early noughties rooms. Four Hands (2001) is a mesmerising tribute to the eloquence of our most useful extremities; four screens, four different pairs of hands, each line and wrinkle so beautifully captured, and so many expressions articulated just by the way they clench or stroke, lift or settle. And the meditative, elemental beauty of Night Vigil (2005/09) leaves a lasting impression. A pair of screens; on one, a single lamp flickers, then the camera pans back with utmost reverence to reveal a whole devotional plinth filled with flickering lamps, framing the silhouette of the woman who is lighting them. On the companion screen, the story begins with darkness: a tiny spot of light at its centre turns out to be a man (Viola himself) in white, walking towards us, his shadow reflected in a shallow pool of water at his feet. These pieces eventually culminate in the actors falling towards the audience – one into water, the other through fire: spellbinding. 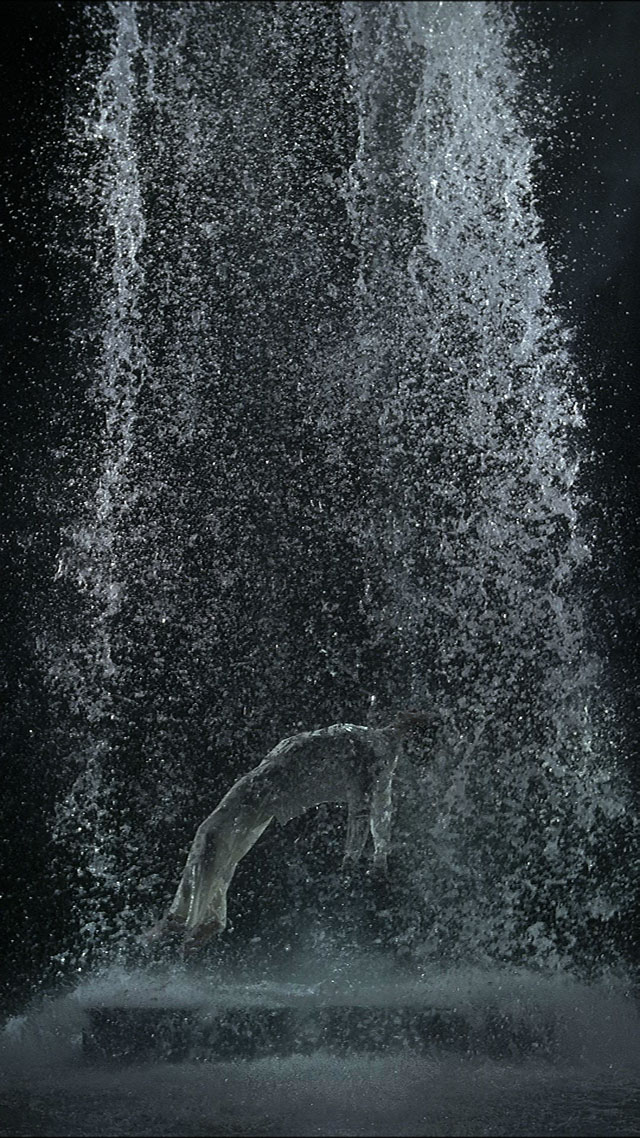 This work is followed by one of the most powerful pieces in the show, set in its own, dark, tomb-like, high-ceilinged space - Tristan’s Ascension (The Sound of a Mountain Under a Waterfall, 2005), which was (like the original version of Night Vigil) commissioned for Peter Sellars’ production of Wagner’s Tristan & Isolde, in Madrid. A man in white robes is laid on a funeral slab. Water starts to dribble, then stream and then torrent over him – except it is in reverse. Although the water is seemingly being sucked upwards, you can see how the pressure of it is pounding his body, lifting his torso off the slab through its force. Drawn in by the stark, monochrome simplicity and the water’s relentless momentum, the viewer feels as oppressed as if they were also enduring this suffocation on the slab.

Water, as we have seen, is one of Viola’s favourite elements – which he attributes to a near-drowning experience when he was six years old. In his earlier work it is shown in its everyday, commonplace setting: an element we all recognise, although its qualities are explored and re-presented in such a way as to make us appreciate it, and our relationship to it, anew. In the later pieces, like this one, water becomes a big, dramatic gesture within the film. Although on this first encounter in the show, its impact is extremely powerful, as we encounter more of these “show-stopping” watery pieces, it feels like its primary purpose is to shock and impress the audience in a manner that seems to have more to do with the scale and quantity and technological prowess of its delivery and capture than it has to do with the revealing of any kind of fundamental truth.

As we progress through the remaining rooms and the past 15 years, there are so many – too many – dramatic watery encounters: a man and a woman pass backwards and forwards through a veil of water (The Innocents, 2007); the old and the young lie immersed in tranquil pools of water, somewhere between life and death (The Dreamers, 2013); three women are filmed on the threshold of a great sheet of pouring water, 2008) and even a whole house (The Deluge, 2002) ends up submerged in great gallons of the stuff. While no doubt still powerful pieces in isolation, shown together, the repetition of this element on which their narratives depend renders them, cumulatively, almost banal. Many report having been moved to tears by these responses to old masters, and Viola enjoys an unusual video art fan-base among the world’s clergy – which he has earned, given the time he has spent contemplating Zen philosophies and ancient religious texts and paintings. But seeing such similar works grouped together raises the uneasy spectre of an artist falling back on a tried-and-tested formula. As his success has escalated and his work gained a large, mainstream audience, has Viola lost interest in challenging himself or experimenting, trying to mine each work, or his beloved medium, for new revelations? How often can an artist repeat these sensational, crowd-pleasing elements with very little variation before one suspects him of resting on his laurels – or pandering to the dictates of his clients who want more Bill Viola bang (albeit of a watery kind) for their buck? 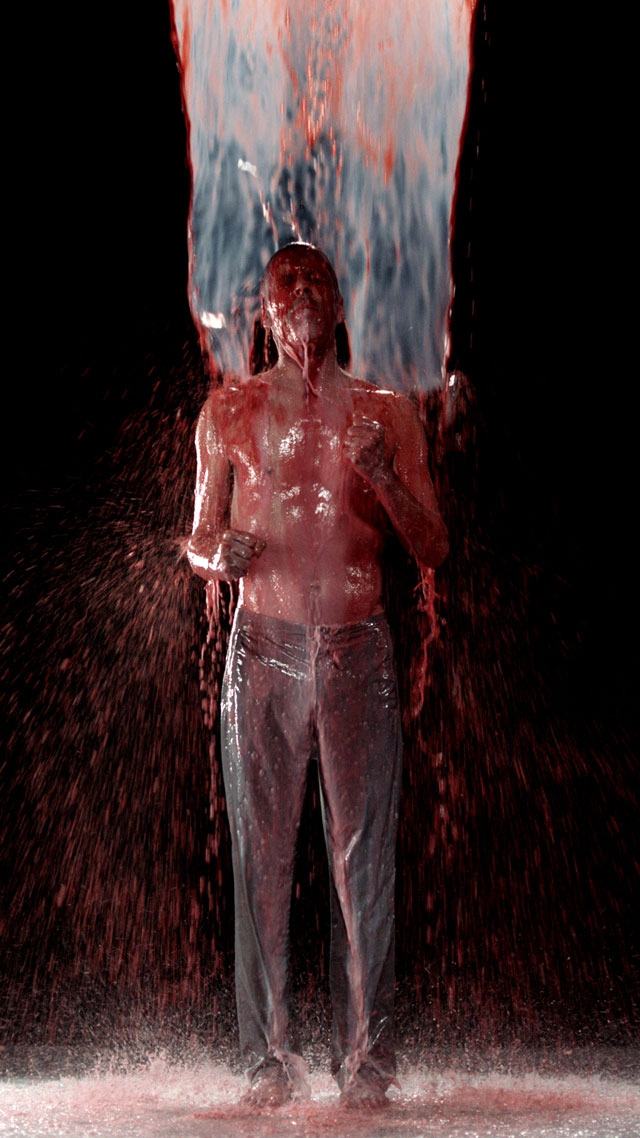 One masterpiece is retained for last, however: Inverted Birth (2014). A man stands alone against a black screen, half-clothed and covered in sticky, dark matter. Over the course of eight minutes, he also endures a (reverse) drenching, but with its own elemental, symbolic undercurrents, as he is slowly bathed first in red, then white, then clear liquid and then air, which renders him as pristine, dry and fluffy as a newborn. Every artist has obsessions to which they return, but it is the ability to mine them for something new, each time - some revelation that strikes the viewer to their core - that makes them great. 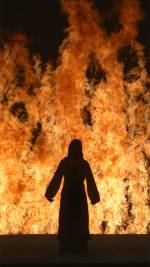 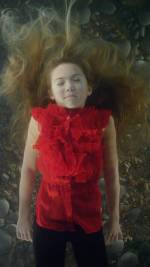 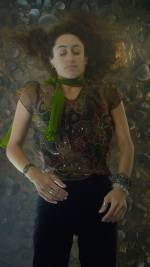 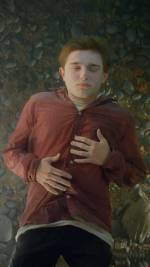