“There’s been time this whole time. You can’t kill time with your heart. Everything takes time. Bees have to move very fast to stay still.” So laments the adolescent protagonist of David Foster Wallace’s short story Forever Overhead as he contemplates an inaugural leap from the high diving board, thus experiencing his first encounter with time’s untrustworthy nature, its tendency to ‘run away’ with us or to move like treacle.

A new exhibition of the work of American artist Bill Viola reveals that great video art has the ability to mirror this tendency: to map time’s uneven flow, its subjection to human consciousness and context; to make a tool of time’s inexorable variety and unpredictability. In addressing the cyclical nature of relationships and behaviours (the “frustrated actions and futile gestures” of the exhibition’s title) Viola’s new videos, like Foster Wallace’s bees, highlight the internal contradiction, which sees time as both infinitely adapted to human perception and completely impossible to alter in its passage or measurement.

Like most of Viola’s work, each series of videos in this exhibition hovers on an edge of some sort: between the conscious and the unconscious, the living and the dead, absurdity and melancholy, the visible and the invisible; between what the skin encloses and what it excludes. In the diptych Man Searching for Immortality/Woman Searching for Eternity (2013), the skin itself becomes a metaphor for lived experience and the possibility of its termination. The two projections show naked, life-sized figures, each around 70 years old, tracking torches across their aging epidermises as if rooting out the pattern of their pasts. The slow, close application of the torch’s beam to the skin equates to a deathbed reminiscence, a thorough going over of one’s experience with the hope of finding in it the kernel of an everlasting future. It speaks of the self-denial with which we use and abuse our bodies, only to be eventually confronted with the unintelligible prospect of their non-existence.

Another diptych, Man with His Soul (2013), nominates the picture frame rather than the skin as the separator between the interior and the exterior self. Here, “man“ is represented by a full-colour, high definition video of a figure sitting, musing, shifting in a chair. His soul occupies the panel next to him, a grainy, black-and-white equivalent that betrays the more extreme characteristics we possess that remain unavailable to the eyes of others. Agitation, frustration, anguish and even maniacal laughter manifest themselves in the expressions and gestures of the “soul“, while barely registering on the face of his physical companion. Viola’s overt questioning of the effectiveness of visual representation in the artistic sense is symbolic of the dubious accuracy of social and emotional representation as a counterpart to our inner selves.

Compelling though these pieces are, it is the cyclical nature of our actions and existences, rather than their inaccessible layers and subtleties, which is most intelligently observed in the videos in this show. Chapel of Frustrated Actions and Futile Gestures (2013) is a grid of nine looped scenes that isolate the barely visible patterns of repetition underlying our behaviour on a micro and macro scale. The peaks and troughs that are a feature of every romantic relationship are distilled into the simple interactions of a pair of figures, face to face, who alternately slap and hug one another. Another screen shows two women wrapping, offering and accepting the same gift back and forth between themselves, with the requisite smiles of appreciation appearing and dying on their faces at the appropriate moments. Meanwhile, two people sit in a boat, one bucketing water into it while the other buckets it out; a man digs and fills a hole in an unending sequence; water, poured into a cracked glass bowl, seeps out and onto the table on which it rests.

Based on Albert Camus’ The Myth of Sisyphus (1942) ­– a philosophical tract inspired by the Greek myth in which Sisyphus is condemned to the endless task of rolling a boulder up a hill, only to watch it roll down again – the nine Chapel scenes are at once farcical and disturbing. Their slow rhythms mesmerise. The impact of this series lies in its simplicity and passivity, both of which mimic the ignorance with which we yoyo to and fro in myriad ways. Yet it is difficult to determine whether Viola’s is a critical voice or merely an observational one: like much of his work, the deliberately slow tempo and careful construction of each scene has a catalysing rather than a prescriptive effect on the viewer’s imagination. Weighty concepts explored through calm, ritualistic narratives have been the key to Viola’s decades of success, and it is an approach, which continues to impress in this powerful new body of work.

The lower gallery space features the latest addition to Viola’s ongoing Water Portraits series, one that brings us away from the rhythms of the quotidian to address the grander cycles of life and death. Entitled The Dreamers (2013), this set of seven video portraits shows the sitters (Gleb, Rebekah, Mark, Madison, Sharon, Christian and Katherine) immersed in water, with eyes closed and bubbles gently rising as they breathe – inexplicably – under its surface. With their softened forms and features, they hover between death and sleep with a dark, unsettling calm. The figures move barely perceptibly as they float, their limbs drifting upward as if dislocated, and the undulations of the water’s surface lend the faces a bulbous, distorted quality. While this subterranean parade of floating beings imposes a delicate atmosphere of cocoon-like immersion on the viewer, the message underlying this series of portraits gets lost amid the videos’ raw visual power.

The exhibition describes itself confidently as “museum-scale“, and while this is a questionable assertion given the number of pieces on show – filling just two large and two small rooms – it is certainly true that the works possess a monumentality that means they more than fill the spaces given them. This monumentality is strikingly present in the video Angel at the Door (2013), the show’s most epic piece, in which the creepiness and intensity of a horror film is generated by the most pared down of narratives: a man sitting and reading next to a door, disturbed intermittently by a knocking for which he cannot find the source. A spoiler at this stage would be unfair on the reader: the slow, calculated accumulation of tension in the ensuing minutes of the film, as well as its climax, should be witnessed first-hand.

Suffice to say, however, that Angel at the Door displays the qualities that could justify the labelling of almost all of Viola’s work as “museum-scale“. His films take on the grandeur of the large-format painted canvas and the solidity of sculpted marble, all the while exploiting the most distinctive capabilities of the moving image. As if they have already written themselves into art history, these videos stare back at the viewer with a directness and timelessness combined with an excellent sense of tragic timing. A master tension-builder, Viola presents an unpredictable world of his own construction that mirrors our own closely enough to uncover its truths, but imperfectly enough to render this process of revelation untrustworthy and unsettling. 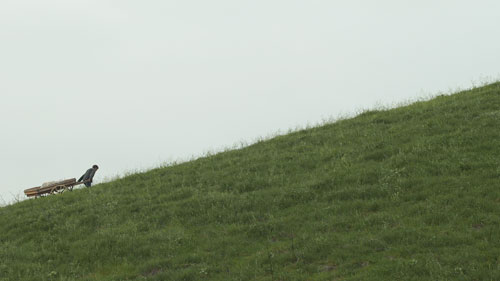 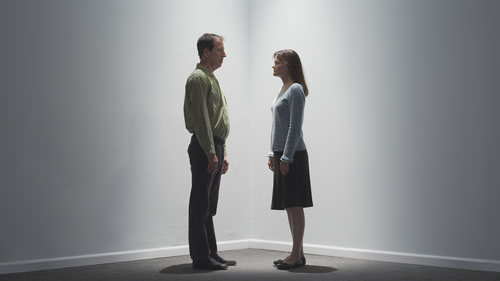 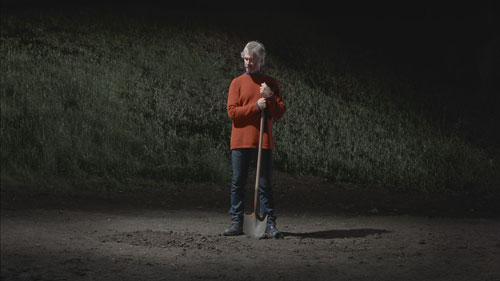 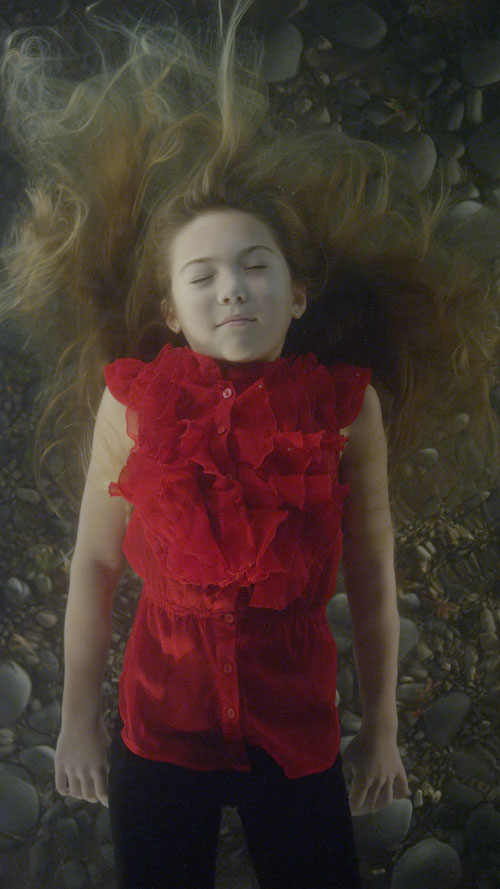 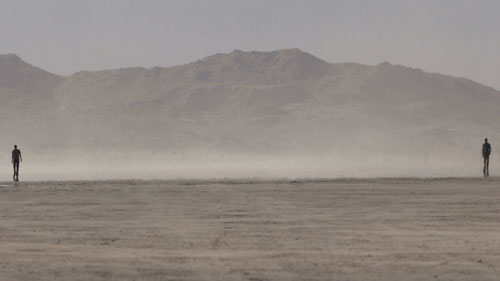