Refraction: The Image of Sense

Refraction: The Image of Sense

The internet and new technology have changed visual culture, and Peter Amdam, curator of Blain Southern’s latest show, has gathered a group of young artists to explore how art now operates, where the interface of human and non-human elements of creativity reveal a plethora of possibilities

A diverse range of young artists is exhibiting at Blain Southern gallery in London, brought together by guest curator, Norwegian Peter Amdam. Refraction: The Image of Sense focuses on the manner in which art operates in a world dominated by new media. Memory, expression, materiality are all perceived from the point of view of a significantly altered experience for individuals, groups and organisations for whom mobile phones, video and photography have come to dominate daily life. The internet, Amdam observes, “stores, directs and administers our memories, dreams, affections, desires, finances, political convictions, and even bodily movement. One can now speculate about the post-human, a composite agency that still feels, senses and imagines the world around us, suggesting a deeply charged modulation on the way aesthetic experience of art is conceptualised, sensed and imagined.” All the artists in the show embrace the notion of the internet, how technology impacts on ideas and the processing of sensations.

Information (1973) is the prescient work of New York artist Bill Viola (b1951), reinforcing his key role in harnessing new technologies and as a precursor and father-figure for the artists in this show, most of whom are in their 20s and 30s. Allowing technology to have a life of its own, Viola’s early work alludes to the manner in which contemporary society has learned to store and impose order on images, sensations and memories. Amdam’s stated intention in Refraction is to explore how art now operates, where the interface of human and non-human elements of creativity reveal a plethora of possibilities, an area of visual culture in a state of flux.

While there has been inadequate analysis of the historic relationship between art and new technologies, leaving many a viewer confused or alienated, the artists in Refraction have a clear understanding of what they have inherited in technological and art historical terms, and what they wish to achieve, in their respective working contexts.

The work of Lars Holdhus, who was born in 1986 in Oslo, explores the technology behind the interface of digital communications. In his series of works in Refraction, he addresses the precise processes required for scanning a page of print or handwritten forms; the scanner divides the image into a coded formation of dots and forms, which he then amplifies in scale and prints. He adds drawn images with the finest pen lines on to the coded digital forms that themselves resemble a smudgy and evocative drawn image. While both types of mark appear to resonate with the human touch, Holdhus’s motive is to define and comprehend the workings of the analytic method of the science of digital communication. Also an accomplished musician, he employs a forensic approach and yet he gives the investigation a sense of rhythm and melody.

Michael Manning (b1985) from Los Angeles embarked on his art education in photography and video, yet, as his work shows, he is keen to acknowledge that he also belongs to the tradition of American abstract painting. Employing a more delicate palette than the action painters of the 1950s, his colours evoke the work of Milton Avery or Cy Twombly. “My work comes over as extremely American,” he told me. “It is in the tradition of classical American abstract painting. But that is like a side product of the internet itself. To me, it is sort of process-based work. I tend to work where I set up systems in which I want to make something in particular, and then use the same system over and over to make as many things as possible. The video work [in this show] is basically making several layers of watercolour gradients on a computer program and then removing sections, animating each section. I just do it very slowly over and over and over again.”

Manning uses different software packages including: After Effects, ArtRage and occasionally Photoshop. The internet came into being when most of the artists in Refraction were in their teens. Their knowledge and ability to use the world wide web is, to quote Manning, “digital nativism”, comparable perhaps to being bilingual from infancy rather than learning a second language later in life.

Timur Si-Qin was born in Berlin in 1984 to German and Mongolian parents and grew up in Arizona. He has chosen a fossilised skull from 2m years ago from the Natural History Museum in New York and reconstructed it using a 3D printer and then cast it in white resin. The resin cast, created by fabricators in Berlin, is bolted inside an upright Perspex coffin decorated with small pink hearts, thus acting as a 21st-century funeral for the remains of the anonymous man.

Ida Ekblad, born in Norway in 1980, has a varied art practice working in painting and poetry, drawing and photo-collage, sculpture and video performance. Her methodology includes salvaging junk, and in her painting she is aware of the respective importance of kinetic movement and performative energy, the smell and touch of the paint itself. Digital memories are evoked through the use of airbrushed ink traces of forms of graffiti and alien life forms. Where the defacement and degradation of consumer culture result in acts of negation, new forms are also established using a reductive (as opposed to abstract) process. Movement and flux and a constant barrage of images in the contemporary world are alluded to in the unexpected juxtaposition of material, form and image.

The melancholic installation by Elias Hansen (b1979), Love really had a way of letting us lose ourselves (2014), evokes a scene of dichotomous aspects of contemporary life, using found objects, glass, light bulbs, naked lady cards, photographic elements, steel, wire and wood. Referring to the death of a close friend and to the paraphernalia of drug manufacture and use, Hansen alludes to the overbearing volume of images we receive in a digital age, and the danger of not being able to adapt to the constant changes required.

An installation by Magali Reus (b1981), Lukes (Dinosaurs) (2014), consists of two refrigerator–like containers made from the materials of manufactured household equipment that explore the interplay between industrial functionality and the human body – folded and riveted powder-coated steel, iron-phosphate powder-coated steel and zinc, in contrast to the hand-charred wood and polyester resin and pigment element – to create an allusion of fluid forms.

Industrial technology is dissected by Norwegian artist Yngve Holen (b1982), where the found object is a water cooler, literally cut in half to expose the workings and grubby, rusty internal parts, a conduit perhaps for the questioning of human survival.

The work by Michael Staniak (b1982) from Melbourne appears to address more closely the issues to which the exhibition is dedicated. His canvases weave the painterly and the digital with a subtle handling of muted greys, enabling the viewer to contemplate and to imagine the numerous intersections that now exist in our culture, where memories and intensely private aspects of daily life are now entrusted.

In my conversations with the artists, the notion of post-human was of central interest. Holdhus is mindful of the problems associated with labelling artists as “digital” or “post-internet” artists, as their lineage is diverse and complex. In the 1970s, he says, a split existed where computer artists were often self-confessed “military-style techno geeks” and they became “amazingly proficient at the technology but were never drawn together with the museum and gallery world”. It is only with the generation represented by Amdam’s exhibition at Blain Southern that the divide has been closed. Manning agrees: “The first artists working in the field of digital art never approached the gallery or museum world; they were more like “hacker artists”. We are able to use the internet in a completely different way from the early computer-art practitioners because the internet now affects our entire culture. I think it is right to say that the term post-internet is not really appropriate; it is just what we are living with. I still think we are on the cusp of [technological] development; we were in our teens when the internet began, whereas I have a brother who is five years younger than me and he does things on computers that are quite foreign to me and experiences things that are way more involved than I am.” 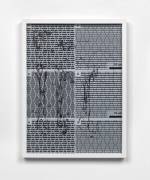 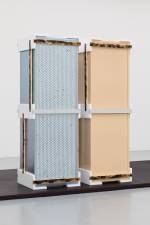 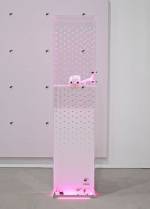 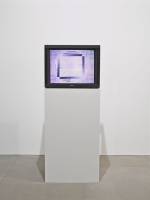