Joana Vasconcelos has filled the Guggenheim Bilbao with work from the past 20 years. She talks about craft, the importance (or otherwise) of scale, and how she seeks to expose and explode the myths and realities around female experience

The Portuguese artist Joana Vasconcelos (b1971, Paris) is famously not afraid of scale. And she is not afraid of controversy. She first grabbed the art-world headlines in 2005, when she showed a huge, white chandelier made of tampons (The Bride, 2001-5) at the Venice Biennale. That groundbreaking work – which she describes as her pièce de résistance – can now be enjoyed at a major solo show at the Guggenheim Bilbao, along with 29 of her other works. Using readymade and humble materials, her sculptural pieces celebrate craft, commitment and tenacity while exploring what it is to be a woman in contemporary society. Not so much a retrospective, she has said, but perhaps it could be dubbed her greatest hits – so far? 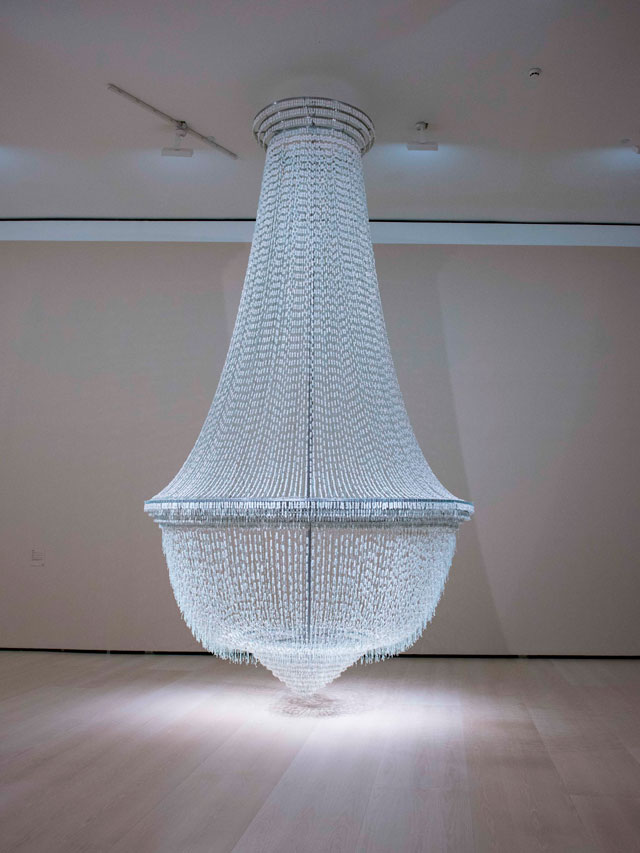 With the help of curators Enrique Juncosa and Petra Joos, the main gallery space has been cleverly choreographed to create moments and moods that set each work off to perfection. We enter a black-lined room where one of her Coração Independente (2005) pieces rotates in all its glittering, filigree splendour; constructed entirely of plastic knives and forks, it is accompanied by the soft crooning of a Portuguese Fado song. 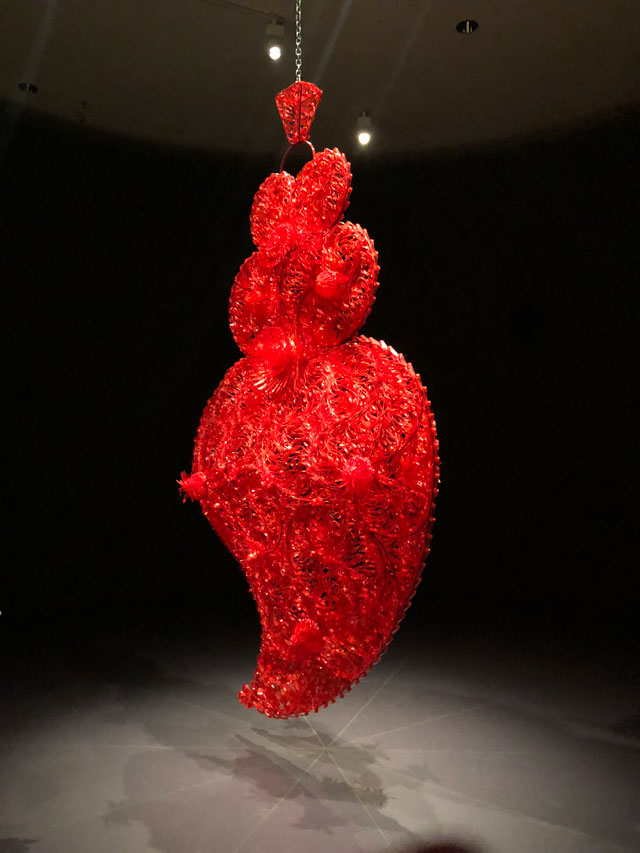 Rooms to the left and right create space for small groups of associated sculptures: Cama Valium (Valium Bed), 1999, together with Sofa Aspirína (Aspirin Sofa), 1997, on one side, and a trio of her more recent, humorous Transformer-toy-inspired A Todo o Vapor (Full Steam Ahead), 2012, robots, made of gently steaming irons.

Around the corner is the disturbing Burka (2002) – a woman’s head, shrouded in layers of fabric (representing different geographies and ethnicities) is hoisted periodically, then sent plummeting to the floor with a crash. This sinister sound combines with the anxiety-inducing tinkling of a later work at the far end of this main gallery, Call Center (2014-16) – a Beretta-shaped sculpture of old-fashioned black phones, their handles and coils dangling expectantly, while a soundtrack composed of their disabled bells trings and trills. 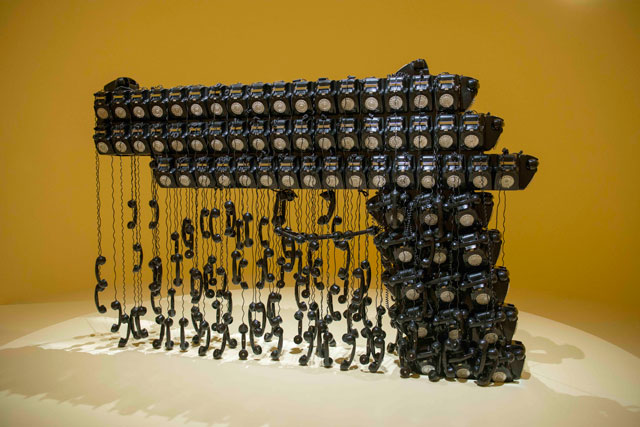 Three new pieces have been created for this show, one of which forms the centrepiece of the main gallery and gives the show its name: I’ll Be Your Mirror (2018) is an enormous Venetian mask made up of bronze-framed mirrors.

A giant diamond ring, Solitaire (2018), sits in a pool just outside the Guggenheim – a symbol of ultimate luxury created from alloy golden wheel rims and crystal whisky glasses. But the real standout piece is the bespoke sculpture that sits in the centre of the Guggenheim, extending its tentacles into every lift shaft and lobby. Egeria (2018) is the largest of Vasconcelos’s Valkyrie series – mobile structures that resemble alien creatures crossed with plants, made entirely of hand-knitted, embroidered, sequin-strewn or crocheted sections. I have encountered three of these this year; one at Jupiter Artland’s small solo show of Vasconcelos’ works, and another currently taking pride of place at the Royal Academy’s summer show, but this one is my favourite to date: it exudes a very flirty, female vivacity that lends a whole new dimension to Frank Gehry’s curvaceous architecture.

Vasconcelos was born in Paris but lives and works in Lisbon. She trained initially as a jeweller before moving into sculpture to explore that same kind of craftsmanship and complexity, but at a totally different scale and within a strong conceptual framework. She has exhibited at the Venice Biennale twice, once with the aforementioned show-stopper The Bride in 2005, then again representing her nation in 2013; she was the first female artist ever to be exhibited at the Palace of Versailles (2012) and has appeared in a wide range of group and solo shows since then. Her work is found in many public and private collections, including the Amorepacific Museum of Art in Seoul, the ARoS Aarhus Kunstmuseum in Denmark, and, in France, at the FRAC Bourgogne and the Fondation Louis Vuitton and the Pinault Collection in Paris. 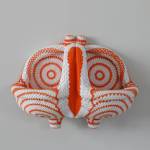 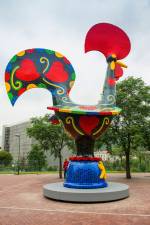