Lucas Arruda: ‘The only reason to call my works landscapes is cultural’

Lucas Arruda: ‘The only reason to call my works landscapes is cultural’

On the occasion of his first London exhibition, at David Zwirner, Lucas Arruda discusses his almost pathological pursuit of a particular theme, revealing the macro within the micro, and how his imaginary landscapes are states of mind suspended in paint

The quietly charged paintings of Lucas Arruda (b1983, São Paulo) are testament to the force of working ritualistically on a recurring theme, in this case the idea of landscape as constructed in the mind’s eye. Most of the continuing Deserto-Modelo series alludes to a horizon line suggesting natural scenery, ineffable seascapes and more particularised jungle scenes. Others are pure monochromes, surface accumulations of paint bordered by raw canvas, with no discernible features. Suspended between reverie and the tactile assertion of paint, the sheer craft of these small paintings is remarkable and should be seen in person if possible.

Behind a velvet curtain is a haunting slide projection of Arruda’s images, fluctuating between total darkness and light, with particular attention to the elusive threshold, entre chien et loup, between day and night.

Angeria Rigamonti di Cutò: Can we start with your artistic beginnings and how you came to painting? I’d imagine that painting would have been an unconventional choice at the time you studied?

Lucas Arruda:  It was a time when painting was not welcome. By the time I got to art school, I had already been painting daily since childhood. I was quite a hyperactive child, so my parents enrolled me in an art school for children where I experimented with different media. By the time I got to college, I was already on a path towards painting, which was unusual in that context. I was part of a generation in Brazil that reclaimed painting in around 2005, almost as a statement, as if to say: why not painting? 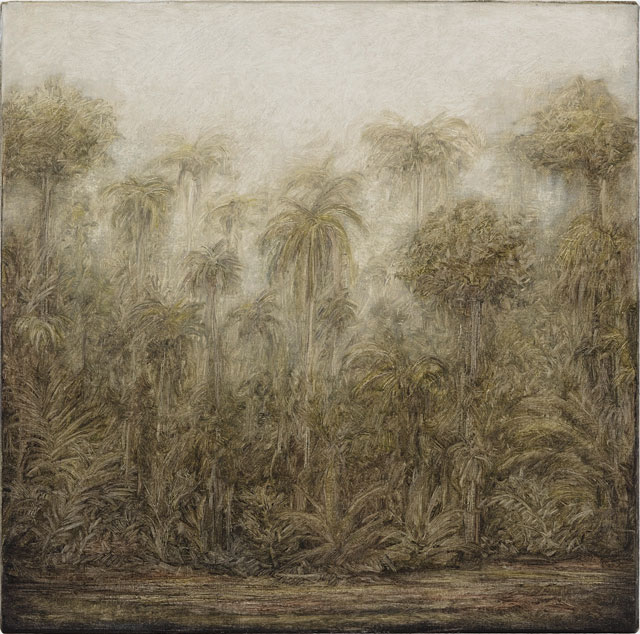 But I consider myself an artist who works with paint, rather than a painter. At the same time, whichever medium I chose to work in is informed by painting. Even my works that seem like classic oils on canvas are more like installations that happen to use the medium of paint.

ARC: In terms of your library of visual references, you’ve looked to the art of Venezuelan artist Armando Reverón, who, alongside his fantastic dolls, made paintings of uncanny seascapes. The imaginary dialogues artists have with the works of others are always intriguing – what appealed to you about his images?

LA: Above all, the way he transmits a kind of metaphysical transcendence through light via the medium of painting. That light takes you beyond the subject matter. He was like a radical impressionist.

ARC: At the same time, your images have been associated with a Romantic sublime tradition centred in England and Germany, but there are also suggestions of James Whistler, Edward Steichen and what I think of as painters of stillness, such as Edward Hopper and Giorgio Morandi. Do you think it’s misleading, or even reductive, to assume you’re citing any particular movement?

LA: I don’t think of myself as a landscape painter. It’s common to view my work through the lens of the sublime, but it’s more complex than that. My work is informed at a technical level by certain landscape painting, in the use of colour and brushwork for example, or Constable’s clouds, which are the best in that tradition. But those painters were observing nature. 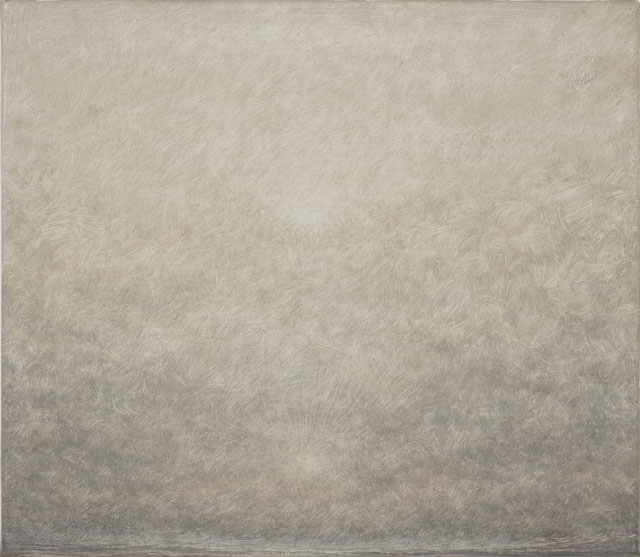 ARC: Which is very distant to what you do, so it’s misleading to describe your pictures as impressionistic, given that direct observation was a bedrock of Impressionism. Conjuring an image from memory seems crucial for you and you’ve previously mentioned abandoning photographs as aide-mémoires, presumably because they’re an impediment to that process of evoking an image through memory.

LA: If anything, I identify more with Morandi, in the sense that I always use the same structure – a landscape with a horizon line. There’s a combination of mathematical and metaphysical impulses in my work. In a way, the only reason to call my works landscapes is cultural: it’s simply that viewers automatically register my format as a landscape, although none of the images can be traced to a geographic location. It’s the idea of a landscape rather than a real place, perhaps in that sense there’s a similarity with the late Turners. 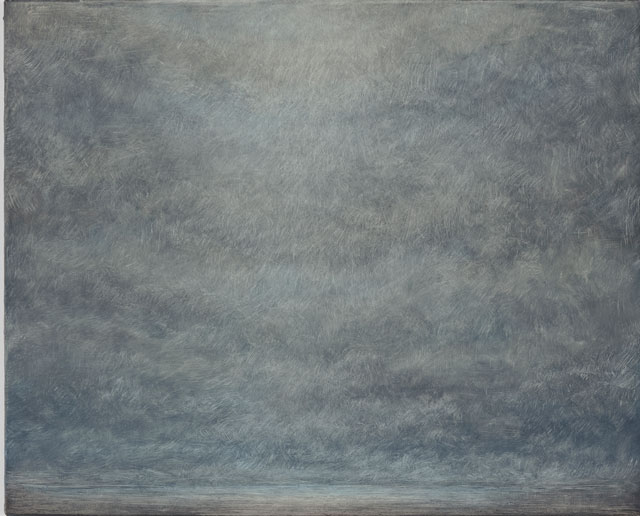 ARC: In the sense of working within the threshold between abstraction and figuration, and using the landscape as a pretext to that end?

LA: And also trying to uncover a mental dimension, a mood, a sensation, a state of mind suspended within the medium of paint.

ARC: Another recurring aspect of your work is your title, Deserto-Modelo. This is a quote from the poet João Cabral de Melo Neto and literary references also seem important to you. What appealed to you about this term, which can be variously interpreted?

LA: I used it in the sense of a prototype or testing ground that could lead to something, or not, allied with the metaphor of the desert understood as an atemporal place that can’t be grasped through language because there aren’t sufficient visual elements to describe it.

The recurring title also subverts the logic of the exhibition as a conclusion or a self-contained moment frozen in time. Rather, it’s an ongoing series of model-deserts and for as long as I continue to research in this direction, I’ll go on using this title to emphasise the idea of repetition.

ARC: Another non-visual reference that struck a chord with you is the unbearably poignant Brazilian song – Luiz Gonzaga’s Assum Preto – about a blackbird whose song becomes more beautiful after it’s deliberately blinded in captivity. Was the appeal here the almost paradoxical idea that physical vision is an impediment to creation?

LA: My father used to sing me the song. The point is that the outside world is a distraction. When the bird can no longer interact with its surroundings through sight, it becomes more focused and starts organising its song to become more intelligible.

ARC: An unexpected aspect of your paintings is that they are small. There’s often an expectation that abstraction or quasi-abstraction needs to be conveyed on a large scale, but your works have that portable intimacy of small devotional panels of 15th-century Netherlandish painting. Why do you favour this scale?

LA: I tried working on a larger scale but wasn’t happy with the results. Every aspect of my painting has been worked out with great precision, including the scale, the choice of paints, the shape of the canvas, with a slightly different format for the jungle scenes to exploit the verticality of the trees. It’s more powerful to contain something as immense as a seascape in a tighter scale. It increases and concentrates the radiation, and the surrounding frequency.

With the monochromes, they permit a larger scale because there’s a surface mass of colour with no distinguishable features, whereas the works with more detail need that smaller scale.

Another aspect it that it’s always a question of subtracting or adding paint. With the monochromes I add paint, so the light comes from the back through the layers of paint and the backlight is the actual colour of the raw canvas. I consider these more conceptual. With the seascapes, I remove paint, starting with very thick layers, unveiling the nuance of every colour. Sometimes, the horizon line is evoked simply by wiping the brush or a cloth, so that the mark that discreetly identifies the image as a seascape is produced by the removal of paint, rather than by an active gesture.

ARC: At the same time, you have a very different, more obviously environmental, rendition of these series of images in another medium: a projection of painted slides that radically alters the viewer’s relationship with the images, with a more theatrical use of colour. What was your intent in this case?

LA: I started working on these when I was doing an art course. The teacher used a slide projector and I always thought about this light that came from the back with no image. It’s very similar to the process I use when I paint. I start with white, bringing in light from the back, then removing paint to let in the light that enters through the primer. I found a machine and started on a very small scale, and was happy not to have much control over what I was doing and admit the element of chance – because I couldn’t really see what I was doing. Every gesture would become grand.

I began doing it just for pleasure, for about a year, without knowing where I would go with it, just adding slides. Then I started thinking about a narrative, for instance that passage between dawn and dusk, and created a sequence that examined those changes. I became really interested in that moment when it becomes completely dark before daybreak, that moment when you feel lost and disoriented. It’s really an attempt to measure the body’s relationship with different times of day, but without a human presence.

ARC: Apropos of human presence, is it too soon to say whether your studies could accommodate human or architectural forms, or do you think you’ll make your variations on a single theme a long-term project?

The recurrent aspect of your works invites comparisons with artists who see repetition as a positive value, such as Peter Dreher with his 40-odd-year series of a single glass. Dreher told us that he considers that repetition not a limitation but a liberation. On Kawara exploited repetition, too, though of a different, semiotic, kind – and you have been exhibited alongside Kawara …

LA: It’s too soon to say. Those artists are so radical, so intense, but I do have that tendency to almost pathologically investigate one theme, such as a church in Italy that I painted again and again years ago.

ARC: Though you gradually removed the church from the image.

LA: Because I want to eliminate any possible narrative element. It’s as if I zoom into something, before zooming out. But with artists such as Peter Dreher, who work with just one element, when there’s a change, it’s a really big, noticeable change, a revolution, which I love – it’s really poetic. With Morandi, too, if he adds a bowl, it’s a big event. With, say, [Francis] Picabia, who constantly changed in very obvious ways, you don’t perceive the shifts as much. I exhibited with Dreher at the Dogana in Venice, and seeing so many of his works together, you could see so many variations, in the surface, the reflections in the glass. In the same way, I see each of my works as being very different.

In literature, this idea of restriction reminds me of Xavier de Maistre’s A Journey Around My Room (1794). Under house arrest, the confined protagonist “travels” around his bedroom and yet turns this into a real voyage of discovery and experience, despite the extreme restriction. You don’t need to go far to discover something and this idea of the macro within the micro is very powerful.

Lucas Arruda, curated by Fernanda Brenner, is at David Zwirner, London, until 23 September 2017.