Mira Schendel is regarded as one of the most significant South American artists of the 20th century, and this exhibition of her early monotypes provides a brief insight into both her experimental process and her continuous questioning of her own subjectivity

London’s Hauser & Wirth Gallery staged simultaneous openings last month in both of its Savile Row spaces. The first was an eclectic display of new works from Rashid Johnson, a young painter and sculptor from Chicago whose interrogations of history and African-American culture have often led his name to be accompanied by the epithet “the next big thing”. The second was an exhibition of monotypes composed on Japanese rice paper by the late Mira Schendel (1919-88), a Swiss-born Brazilian whose visual explorations of language and philosophy established her as arguably one of the most important South American artists of the 20th century.

Initially, it appears that there can only be one winner here. Within a room of black soap and wax paintings, Johnson brings a vast steel storage unit of plants, neon lights and Bill Cosby memoirs – not to mention a sizeable mob of supporters – while Schendel brings nothing but what seems to be a series of scribbles on Japanese rice paper. But regardless of these differing approaches, and the age and cultural gaps separating the respective competitors, this Hauser-sponsored meet is still something of a heavyweight bout. For it is Schendel’s humble monotypes that ultimately go the distance, as beguiling as they are confusing in their simplicity.

Having spent her early years in Europe, Schendel settled in the Brazilian city of São Paolo in 1953. At this time, the city was in the midst of postwar upheaval, a social and artistic revolution that pushed for progression through innovation. Caught in the energy of this creative climate, Schendel began to experiment. Her paintings and drawings became more conceptual, just as her incorporation of influences and materials became more wide-ranging. Negative space was promoted, while line and gesture were simplified, no longer used as representational tools in the conventional sense, but called on to describe and document expression itself. It is from this period that the monotype works are taken, a period that proved vital to her later explorations of language and philosophy that would eventually hang in galleries such as the Tate Modern in London, Portugal’s Museu de Arte Contemporânea at the Fundação de Serralves in Porto, and the Pinacoteca do Estado de São Paulo.

Monotypes are made by covering a glass or acrylic plate with ink or oil paint, overlaying that plate with absorbent paper and drawing on to its surface. Where pressure is exerted, the paper is forced into the dye and the colour is picked up on the reverse side. This technique is both disciplined and spontaneous, as every single point of pressure will produce a permanent mark, whether intentional or otherwise. Hung from the ceiling by delicate wires and organised in a large display case flanking two of the gallery’s walls, Schendel’s experiments are demonstrative of this. Showing an attempt at order and control, the works are organised into several “families”, including Horizontals, Arrows and Unique Writings. But even within the bounds of these taxonomies, there remains a tangible freedom to the works. Schendel’s long, thin lines flail across the delicate pages of rice paper, sometimes resembling circuit boards, sometimes spiders’ legs. Certain motifs, such as scrawled handwriting, horizontal lines and lopsided circles, are picked up and carried across several experiments, only to be dropped completely in favour of other designs.The markings are fleeting and never appear to be entirely controlled. These works are not accidental, but throughout the exhibition it is evident that they are greatly informed by spontaneity, impulse and error. As Schendel herself asserted, these markings appear “out of chance and curiosity”, constantly at the mercy of a shaking hand or a moment of doubt.

This is not, however, a hindrance, for it is this ever-visible human presence, manifesting in the slight deviation of a straight line or a blemish in the corner of a page, that lends the works an eerie familiarity. While the monotypes may resemblecave paintings, signatures or braille dots, they always resemble, they never exist as such. So why is it that these abstract ramblings, which so rarely appear as complete and identifiable forms, seem so familiar, so recognisable? These works are essentially visual reproductions of Schendel’s psyche, mappings of a human mind. And as the almost hermetic symbols inattentively fall in and out of sight, evolving through various incarnations of line and shape, what we see is something akin to our own mental processes, those that flit between reality and fantasy, between focus and inattention, between there and not. In their fleeting, fragmentary states, these works represent the brief instances of aphasia that we all experience on a day-to-day basis. They are the moments when we zone out of a conversation, the masterpieces that appear when our hand is holding a pen and our mind is elsewhere, the lapses in consciousness when everything that lies before us is eradicated and we forget where we are.

Taken at face value, this exhibition is composed of one repeated concept, and – aside from a single sculpture that is lost in the centre of the gallery – one technique. It avoids shock value, it avoids overcomplication and because of this it will most likely avoid the plaudits that it truly deserves. It is through this very simplicity, however, this unfaltering dedication to a single non-representational style, that Schendel is able to form an accurate portrait of not only her own subconscious, but ours as well. The line that we see running through each of her works is far from constant in its appearance, but it is constant in its presence. Occasionally stumbling, it moves from sheet to sheet, twisting and turning in order to preserve some element of its own character. It is never stable, it is never reliable, but in the face of the white expanse that continually threatens to consume it, it still exists. What better way is there to describe our own relation to the world than that? 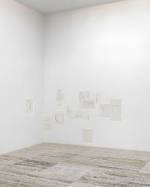 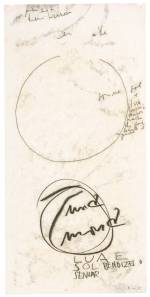 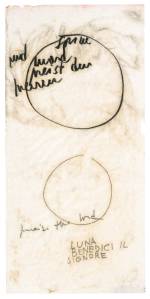 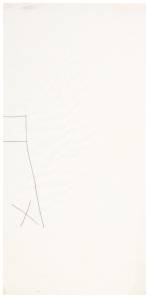 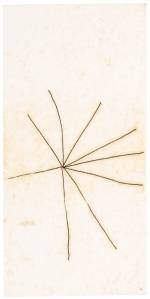 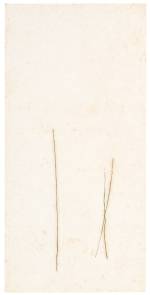 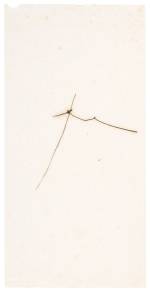 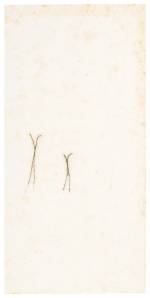 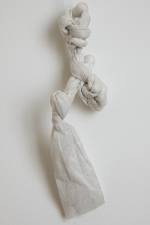