Oscar Murillo: through patches of corn, wheat and mud

Oscar Murillo: through patches of corn, wheat and mud

Canvases appear abandoned on the floor and wet paint suggest a state of un-finish, but the compositions are complex, and the overlaid marks, prints, and repeated brushstrokes, a result of a prolonged process and experimentation 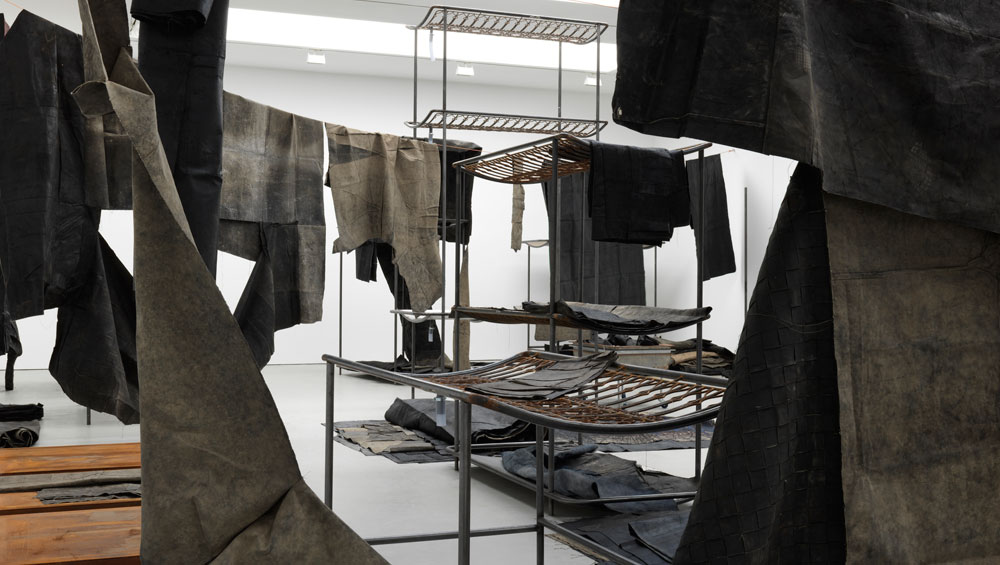 The noxious smell of damp oil paint announces Oscar Murillo’s A futile mercantile disposition (2016) before the installation is entirely visible at David Zwirner Gallery on West 19th Street in New York. Large canvases are draped over steel structures and wires to create a maze-like formation, while folded and crumpled canvases litter the floor, adding further obstacles for the visitor to move around. Each canvas is covered on both sides with two coats of paint (the cause of the offending odour), yet no two are alike. Many have been cut into strips and pieced back together to create long swathes of cloth, some of which hang like banners, while others cascade in waves from just below the ceiling to just above the floor before looping back up again. Most are wholly black, but some bear evidence of their previous use as oil pads, with colourful patches smeared across the dark ground, and, in rare instances, the impression of a composition appears fully legible and bright. The stench of wet paint suggests a state of un-finish that fluctuates equally between completion and abandonment.

The installation’s title and the haphazard arrangements of the canvases – discarded in a crumpled mess, hung unevenly, or folded into overlapping piles – evoke a greater sense of the latter, an impression further heightened by the tracks of rust that appear on the metal structures. Yet the abundance of abandoned artworks, installed in a commercial space, also playfully speaks to the insatiable hunger of the consumer, who drives production indefinitely, like the perpetual motion of the spinning top portrayed in the single-channel video on the television in the corner, or perhaps it may even imply that the practice of making art is itself a Sisyphean endeavour, a labour never to be achieved, but to be begun again indefinitely.

Born in Colombia in 1986, Murillo studied art in London, where he now maintains a studio. Themes of distance, displacement and movement are to key to his practice, and much of his early work is closely tied to the notions of community and migration. In its use of black canvases patched together, hung from wires, and scattered on the floor,  A futile mercantile disposition recalls the artist’s earlier installation Meandering – black wall (2014-15), displayed at David Zwirner’s London space last year. Yet the latest installation is more complex, more fraught. The presence of corn and clay in both works is a reference to sociopolitical landscape of post-colonial Colombia, but this nod to the past has less presence in the latest work, which tantalises the viewer with its scale and maze. 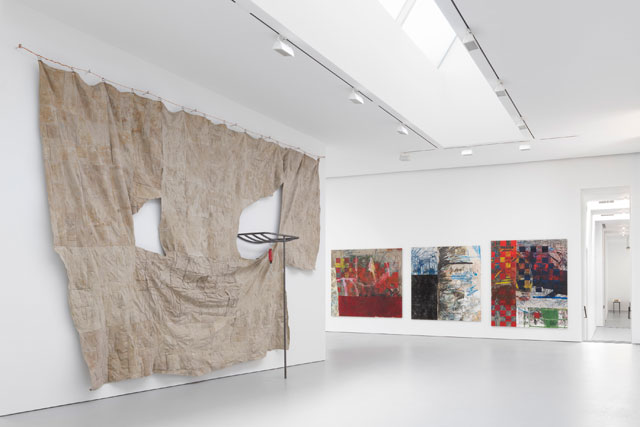 The exhibition takes its subtitle from the monumental, partially torn painting Through patches of corn, wheat and mud (2016), which hangs from a metal armature similar to the ones employed in the installation. Projecting out of the torn hole to the right of centre is a metal structure from which a scale hangs, almost expectantly, ready to be put into use. Figuration is abandoned here and paint is superseded by cloth. The patchwork composition has an uneven surface of abstract forms, and the presence of rough seam edges on both sides denies the clear distinction between “recto” and “verso”. This evidence of the work’s making, of how the pieces of linen covered in natural latex were minutely stitched together, points to process, but more eloquently endows Through patches of corn, wheat and mud with a sense of movement.

Colour bursts forth in the group of paintings that surround Through patches of corn, wheat and mud. In a continuation of the multilayered, painted, and printed works for which Murillo first became known, most of these canvases contain discernible, if jumbled, imagery. A group of children, drawn from the back of the Jamaican $2 note, appear printed next to a matching group of children from the back of the Singapore $2 note on both SQ 317 (38,500 ft) (2015-16) and Education, out of one many people (2015-16), partially obscured by a chequerboard pattern, jagged circles, and hatch-marks. On Pig, raining clouds, HK (2016), a plump pig, taken from a Colombian animal-feed wrapper, trots in the opposite direction below a parading brass band from a Hong Kong bank note, an image repeated twice, with a faint impression followed by a crisp, clear print. Drawn from disparate locations, the currency that appears on these canvases may reflect Murillo’s recent interest in exploring the different possibilities for an artist working within an increasingly global world. Though by reusing the same imagery in several works, he also pushes the viewer to look again, to notice the obvious recycling of propagandistic imagery: happy children, marching bands and fat pigs.

Through the appropriation of the trappings of trade – money and advertising – these paintings also echo the oppositional play between production and consumption found in Futile mercantile disposition. These complex compositions, composed of overlaid marks, prints, and repeated brushstrokes, are the result of a prolonged process, which Murillo has described as a physical performance. He notes that he sometimes begins a canvas, and after a period, folds it in half and discards it on the floor, possibly to return to it or possibly not. His process is continuous and the repetition of imagery speaks to this sense of extended, perpetual experimentation.