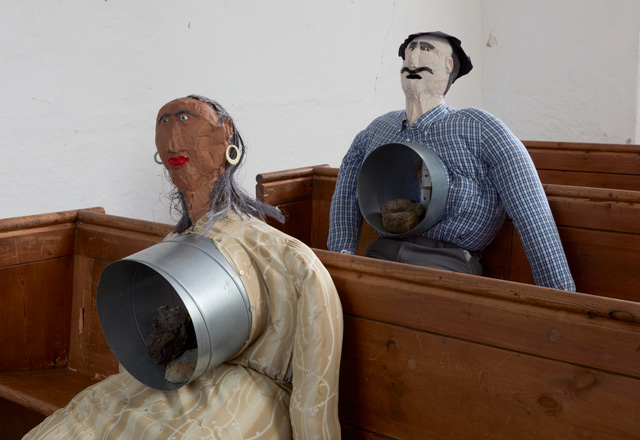 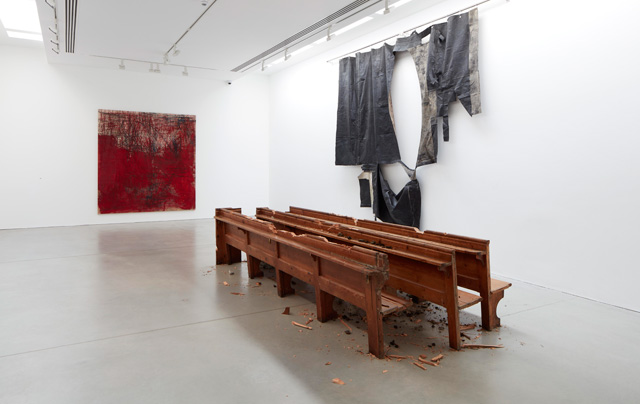 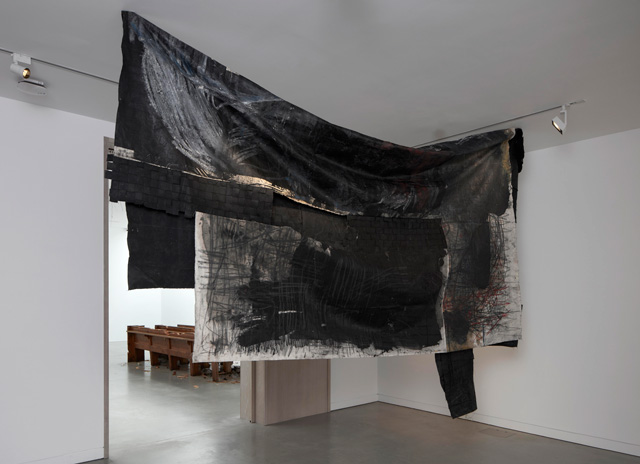 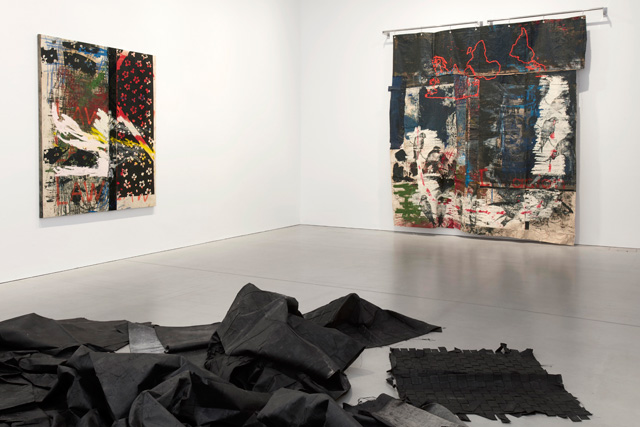 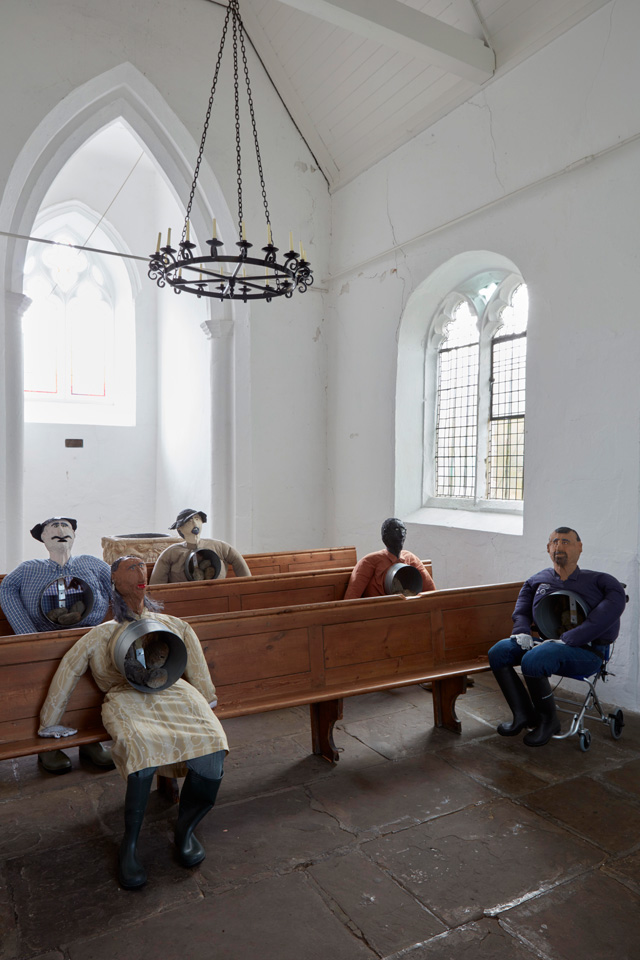 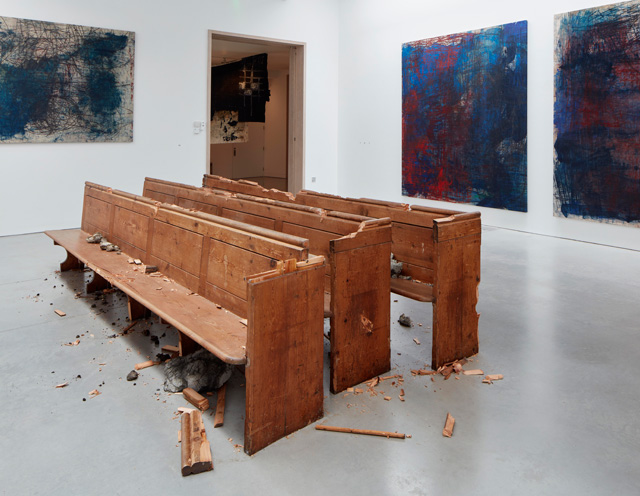 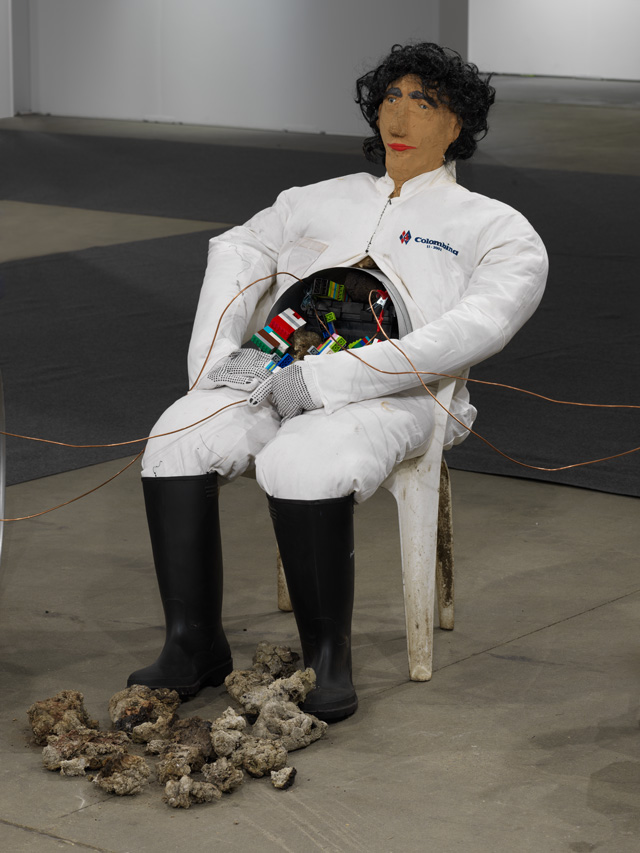 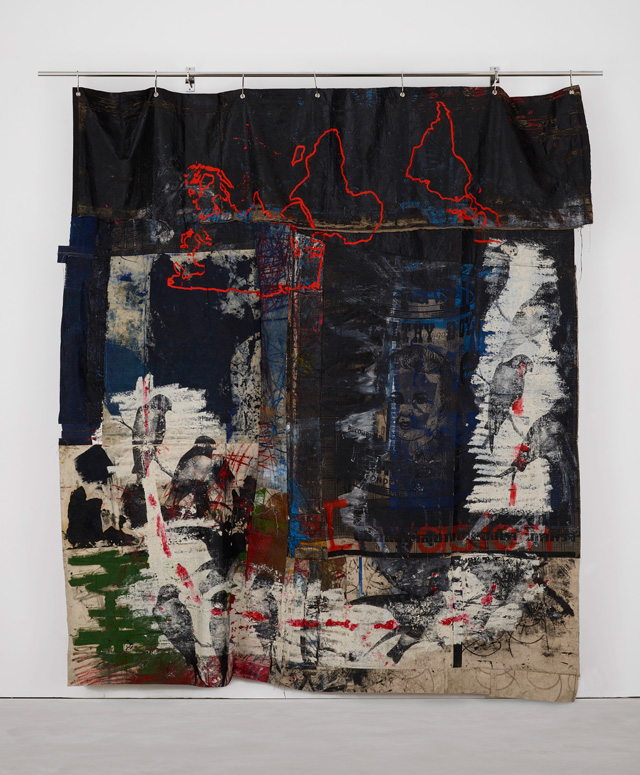 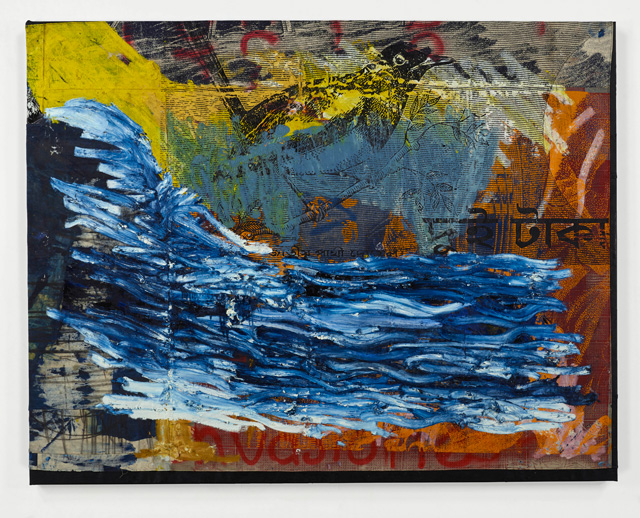 Spread across the various spaces of Kettle’s Yard, Murillo’s works address the recurrent theme of the movement of people across borders and human labour in a global economy

At a time when national borders seem increasingly entrenched and the movement of peoples around the world becomes more and more difficult, the work of Oscar Murillo (b1986) disrupts and questions those borders and difficulties in an itinerant practice that spans painting, installation, drawing and performance. Violent Amnesia is Murillo’s first exhibition in a UK public institution since 2013 when his exhibition at the South London Gallery attracted critical acclaim. In this exhibition at Kettle’s Yard, Murillo brings his own experience of displacement to bear – he was born in La Paila, Colombia, and arrived in London as an immigrant with his family in the 1990s. That experience, as well as his continuing experiences of global travel, saturate his works, which function rather like mirrors for the uncertain social, economic and political times in which we live. The works also reflect a culture of constant communication, often conveyed in the limited palette of black, blue and red (typically associated with written and printed matter) that Murillo employs. 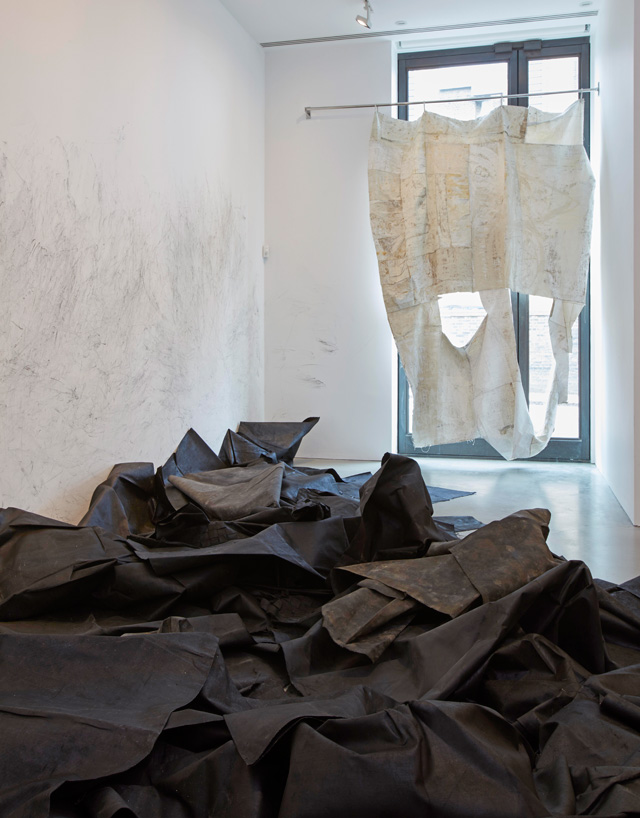 Given the complex idea of fluidity embedded in his works, it is appropriate that they are spread across the various spaces of Kettle’s Yard. Uncontained by the formal gallery spaces, the exhibition also occupies the entrance area, the learning studio and the research space. Furthermore, it leaches out of the building itself, filling a window into Castle Street, inhabiting the neighbouring St Peter’s church and hanging in the house that belonged to Kettle’s Yard’s creator Jim Ede. While some of these spaces work extremely well as places in which to experience Murillo’s work, others are less successful.

The first works encountered are those in the entrance area. A wall piece consisting of vinyl lettering obscured by white paint is deliberately difficult to read and easy to dismiss without too much attention. The work’s location in this place of transit is its strength, underlining Murillo’s interest in movement of people, but also its weakness, as we perhaps overlook it in passing. A hanging piece in the gallery lobby is more confrontational because movement around it has to be negotiated. 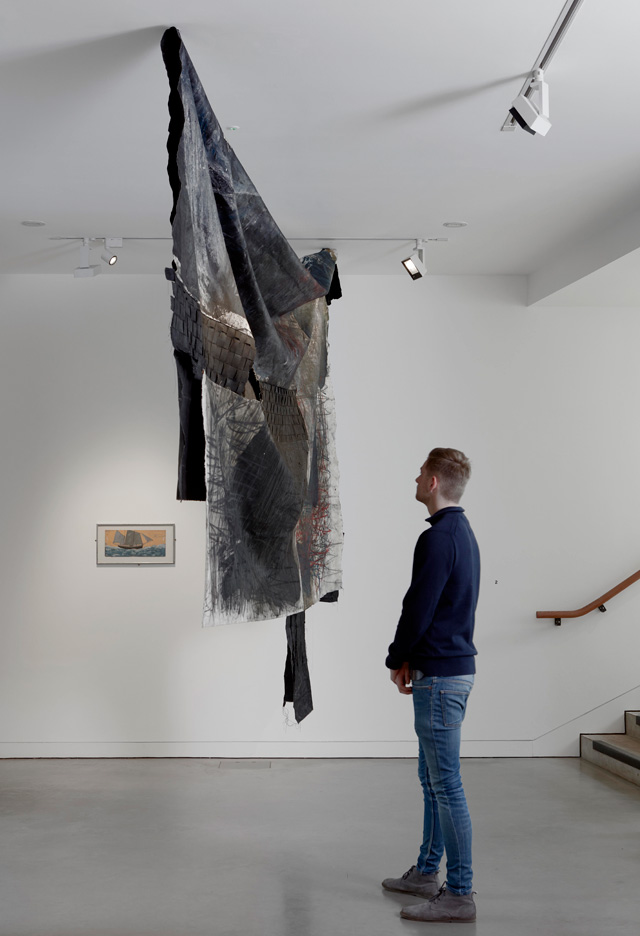 It is accompanied by a tiny Alfred Wallis painting chosen by Murillo from Kettle’s Yard’s collection to be part of the exhibition. Wallis used unconventional materials and processes in his work, such as cardboard and boat paint. The Wallis painting seems entirely out of place, so it is good that the exhibition guide explains Murillo’s own challenges to the conventions of painting, linking this to his selection of the painting.

The two main gallery spaces, both dominated by the sprawling installation The Institute of Reconciliation (2014 – ongoing), are the most powerful and successful parts of the exhibition. This is probably because of the emotional intensity precipitated by the works in these spaces. 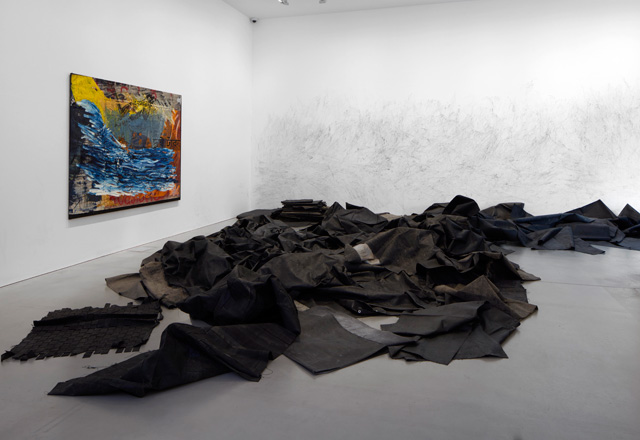 In the Sackler Gallery, swathes of black canvas seem to surge across the floor. Sections of canvas steeped in dense black paint appear elsewhere, too, and have been used to mark the gallery walls. 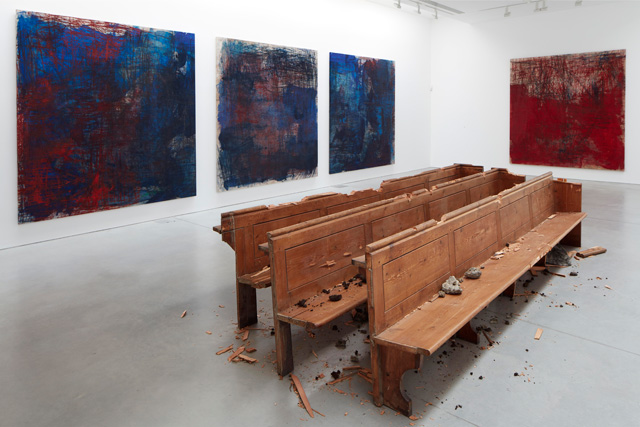 In Gallery 2, scenes of violence and destruction simultaneously attract and repel us. Rather like drivers slowing to view the scene of a fatal road accident, visitors circle the smashed, splintered and broken pews while trying to make sense of the scene they are faced with. Further sections of black canvas hang on the wall in front of the destroyed pews, appearing as a dysfunctional altarpiece, underlining the idea of ritual or mourning inherent in this work. 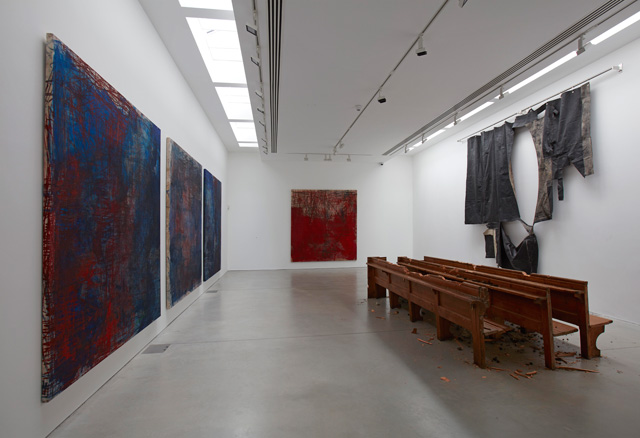 Murillo’s extensive use of black canvas throughout The Institute of Reconciliation lends weight and intensity to the piece. This intensity might be linked to Murillo’s memories of growing up in La Paila, where the local sugar factory periodically covered the streets with black ash, shifting the mood of the town’s people. Murillo’s use of burnt corn in his work also references his Colombian origins. Corn is a staple food for the working people of Colombia, and Murillo combines it with clay fired in a kiln to make his burnt corn and clay sculptures. His use of burnt corn and coins in his work references the economy and the exploitation of workers. 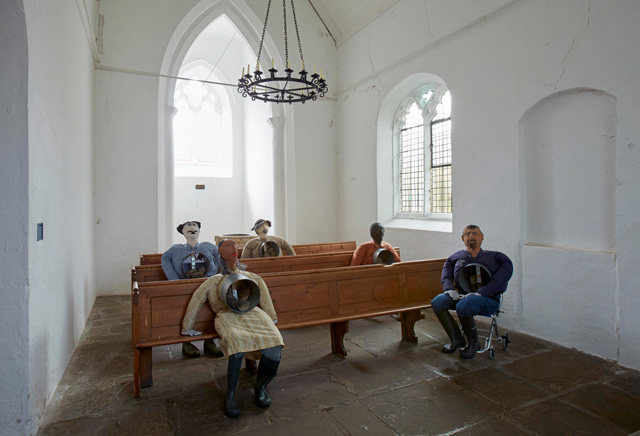 In St Peter’s church, neighbouring Kettle’s Yard, another element of The Institute of Reconciliation is installed. St Peter’s is set atop a small hilly churchyard and among ancient trees. This is an intimate space, which is what makes the five figures installed in the pews so incongruous, and this part of the installation did not work for me. The figures’ torsos are pierced with large sections of ventilation pipe from which spill Murillo’s trademark burnt corn and clay sculptures. They sit apart from each other, but seem to be waiting together for something to happen. They also recall traditional Colombian effigies, which are made and burned in New Year celebrations. This is political work about labour and oppression, but it is not clear why it is installed in a church. Indeed, visitors seemed more interested in the church building itself. 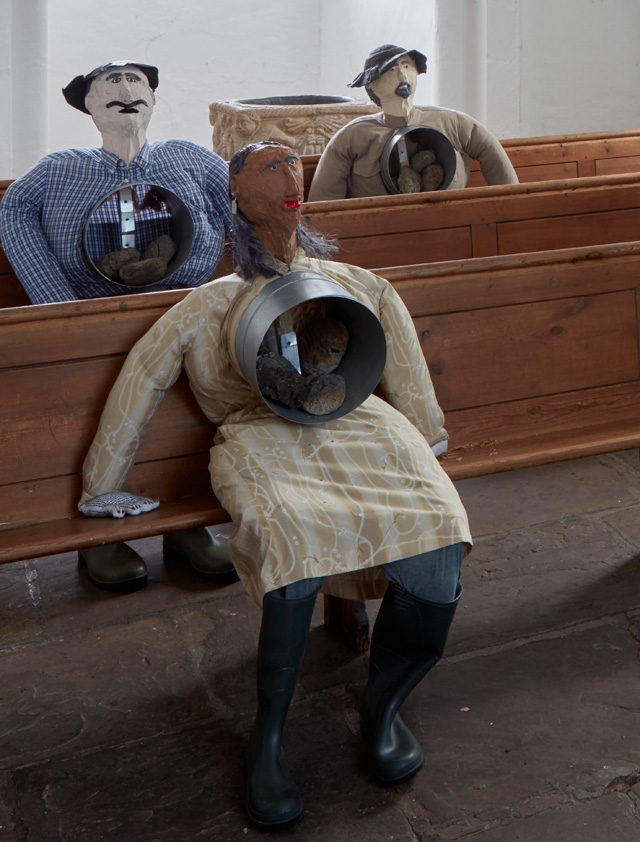 In Kettle’s Yard’s learning studio, we get a glimpse of Murillo’s Frequencies (2015). This is a long-term project devised by the artist as a collaboration with students aged 10 to 16 from schools across the world. The gallery’s research space accommodates three of Murillo’s works. The most imposing of these is My Name Is Belisario (2016), a sound work installed around a heavy copper table. Visitors can sit at the table to listen to audio recordings of Murillo’s father, Belisario, recount his life story. It is a powerful piece. 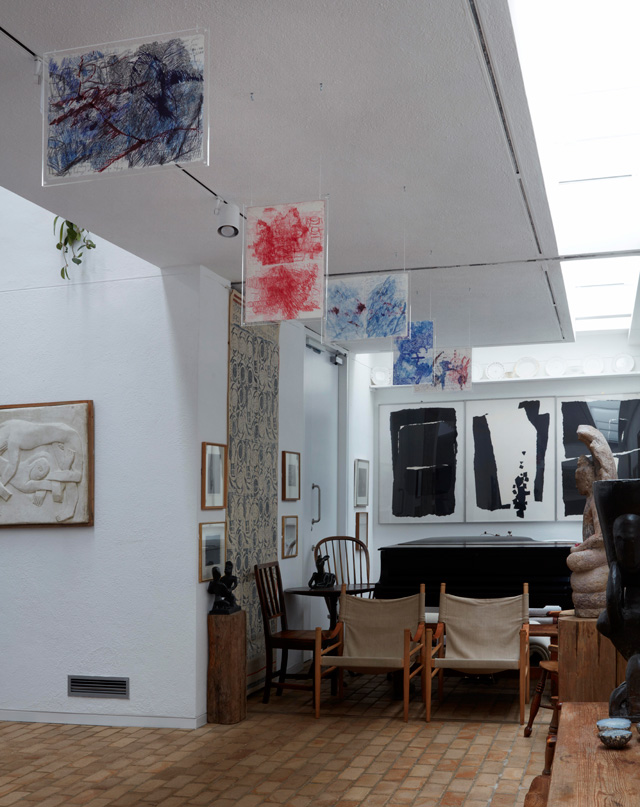 Murillo’s Flight # (2019) drawings are installed in the house at Kettle’s Yard. Suspended from the ceiling in Perspex frames, these drawings in pen, pencil, graphite and carbon, are the most delicate pieces in the exhibition and seem entirely at ease among Ede’s collection. Although Flight # (2019) is visually very different from everything else in the house, there are convergences in Ede’s and Murillo’s views on art, which perhaps explains this. Murillo work addresses the recurrent theme of human labour in a global economy. He uses his artistic practice to scrutinise the place of workers as both producers and consumers within an economic system he regards as stagnant. The work asks questions about these conditions and requires the viewer to do the same. This aligns well with Ede’s belief in the power of art to make us review and challenge our own position in the world. 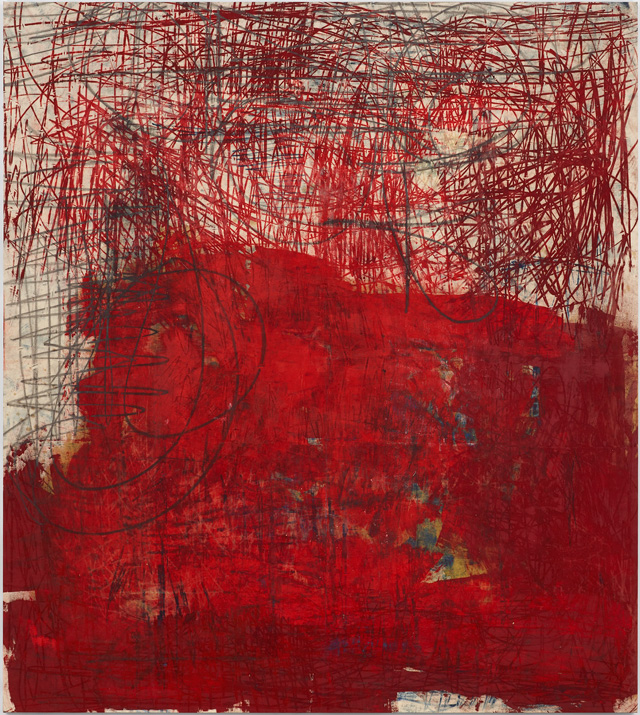