Lubna Chowdhary – interview: ‘Erratic is a useful analogy for a diaspora artist’

Lubna Chowdhary – interview: ‘Erratic is a useful analogy for a diaspora artist’

With swooping forms and blazing colour, Chowdhary explores the grey areas between east and west, sculpture and architecture, and the functional and the decorative. She talks here about the themes that underpin her work

You can spot the artist’s house on Lubna Chowdhary’s quiet street in south London: the painting, planting and view through the windows all broadcast her mastery of subtle colour and form. At the back of a lively garden is her ceramics studio, lined with maquettes and works in progress. Back in the house, she has arranged an exhibition in miniature for us: examples of her recent series. They become essential props in a conversation that roves around the interplay of different cultures: the art world and the craft world; northern Europe and South Asia.

Chowdhary uses the vernacular of functional design – wooden furniture, ceramic vessels and tiles – to explore cultural hybridity, the object and the body, and the relationship between hand making and industrial manufacture. In her exhibition Erratics at Middlesbrough Institute of Modern Art, the artist elaborates these key concerns, while celebrating, too, the seductive lushness of coloured glazes and geometric ornamentation. 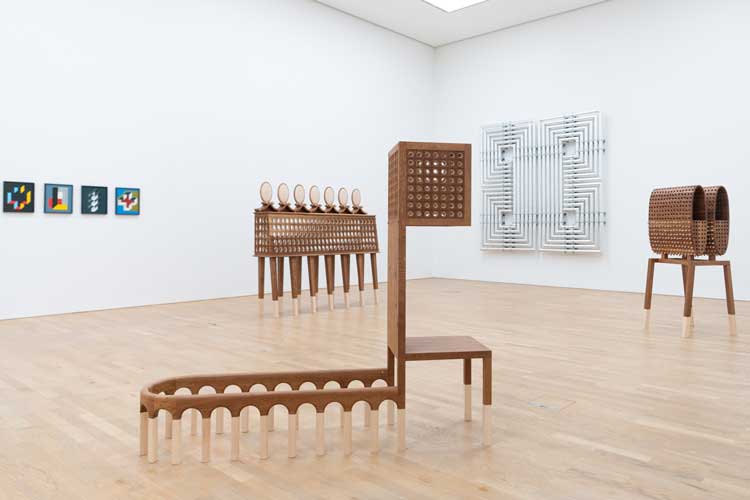 In geology, the term “erratic” denotes a stone inconsistent with the surrounding rock. Picked up and transported across long distances by a glacier, an erratic is deposited by melting ice: a stranger on foreign terrain, it is nevertheless, literally, part of the landscape. Chowdhary uses the term both for its sense of dislocation, and of blending: it is, she says, a useful analogy for a diaspora artist.

The titular Erratics are wooden sculptures inspired by furniture from India’s colonial period, now in the collection of the Victoria & Albert Museum (V&A) in London. Chowdhary encountered these hybrid objects during a ceramics residency at the museum in 2017. In Erratics I, II & III, she pushes the “lost in translation” oddness of 19th-century British designs reinterpreted by Indian artisans still further, beyond the limits of usefulness. The small ceramic sculptures Disobedient Typologies (2021) continue Chowdhary’s investigation of grey areas: between east and west, sculpture and architecture, and the functional and the decorative. 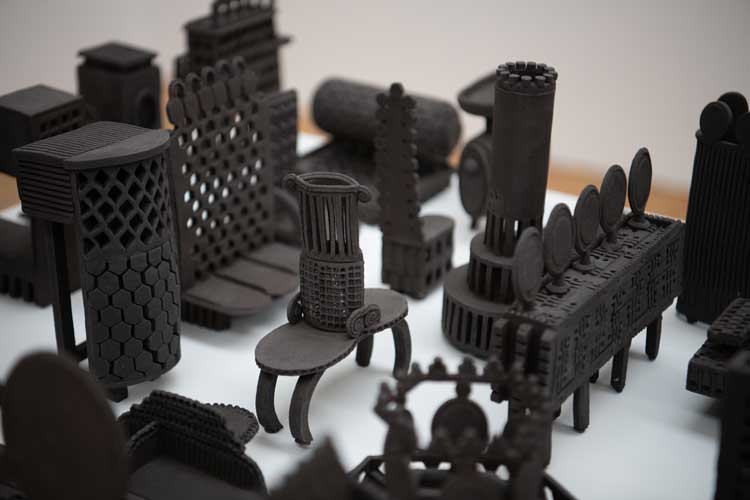 Formally, the arrangements of shaped tiles that make up tableaux such as Certain Times 51 (2021) recall Giorgio Morandi’s still-life paintings of clustered vessels, while their bright glazes serve as a vivid counter to his cool tonality. Here, as in wall-based tile works such as the Sign series, Chowdhary confronts the legacy of the Austrian architect Adolf Loos, whose 1910 essay Ornament & Crime announced: “Cultural evolution is equivalent to the removal of ornament from articles in daily use.” The legacy of Loos’s campaign against ornament endures in “sophisticated” minimalist design of the present day. Underlying Loos’s objections to the exploitation of labourers and the obsolescence of fashionable designs, was an explicit connection between ornament and “primitive” cultures: “the natives, the Persians, the Slovak peasant”. Chowdhary’s riposte comes in swooping forms and blazing colour.

Born in Tanzania in 1964, Chowdhary grew up in Rochdale in the north of England and is now based in south London. Since studying ceramics at London’s Royal College of Art, she has collaborated with architects on commissions in the public and private sphere, among them the installation of glazed pictorial tiles, Interstice (2021), in the entrance lobby at the recently redeveloped 100 Liverpool Street building in London and a rhythmic ceramic design for the foyer of the Standard Hotel, also in London. About 20 years in the making, Metropolis – her 1,000-piece exploration of architectural forms real and imagined – was shortlisted at an early stage for the Jerwood Ceramics Prize in 2001. The finished version was installed in the Asian and European Ceramics Gallery of the V&A in 2017 and is now in the permanent collection of the Jameel Arts Centre in Dubai. In 2021, she was shortlisted for the annual Freelands Foundation Award. A version of Erratics was shown at Peer Gallery in London in 2021.

Interview by HETTIE JUDAH
Filmed and edited by MARTIN KENNEDY 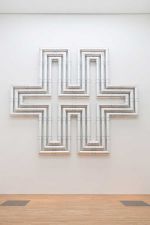