Betty Woodman: Theatre of the Domestic

Betty Woodman: Theatre of the Domestic

Breaking the boundaries between 2D and 3D works, Betty Woodman’s ceramic assemblages resemble stage sets for dreams, filled with figments and fragments of imagination and memory

Betty Woodman (b1930) began working with clay as a teenager. Adopting the utilitarian form of the vase as her subject, she initially got her husband, George – then a painter, now a photographer – to paint her finished pieces. “There’s a form,” she says, “and then the way you paint on it changes the way you perceive it.”1 Looking for example, at Posing with Vases at the Beach (2008) – two large vases painted, on one side, with nude figures such that they become bodies – this couldn’t be better exemplified: in Woodman’s hands, a functional vessel is turned into a figurative sculpture.

Having spent many years championing ceramics, Woodman now talks equally easily of the joys of painting. When George stopped adding to her pieces, she left them unpainted for a while, but then began to develop her own gestural style. Today, this combination of forming and painting, combining 2D with 3D, is what makes Woodman’s work stand out. Her anthropomorphic creations play both on the object/image dichotomy and the age-old equivalence of pot to body, reflected in the terminology of the pot’s parts: lip, mouth, shoulder, belly and foot.

In 2006, Woodman, who lives and works in New York City and Antella, Italy, spending six months of the year in each, was the first living woman to have a major career retrospective at the Metropolitan Museum of Art, New York. Her current exhibition at the ICA, London – Theatre of the Domestic – is her first UK solo presentation.

The ground floor gallery is reminiscent of an archaeological dig site, with pots standing everywhere – some on the ground, some on wooden plinths (which, themselves, have been made into part of the artwork), and some attached to canvases on the wall. There are canvases on the floor, too, although Woodman prefers to call them “carpets”, and these are littered with assorted oddments, ceramic shapes, mostly unpainted, that could be ancient fragments, bones or jigsaw pieces.

Woodman recalls how she first began to find these leftover pieces of clay “interesting” because she would not have intentionally cut them out that way: “I would never have made that shape for its own sake.”2 With boxes and boxes of them mounting up, she tipped them out on to rolls of brown paper so that she could draw round and catalogue what shapes she had. Then it occurred to her how much the brown paper resembled a carpet. Since then, these leftover pieces have also migrated to the walls, as in Wallpaper 9 (2015), along the corridor from foyer to cafe and theatre. Here, there is a tumultuous dance of flowers, foliage and more pots – painted livelily with stripes and spots – assembled as if made from a pack of children’s Fuzzy-Felt.

There is, of course, an undeniable comparison between Woodman’s leftover pieces of clay and Matisse’s cut-outs – something the artist herself readily recognises. She cites him as having been a big influence. Her works, however, are more feminine – perhaps due to the luminous colour palette – candy pink, lemon yellow, lime green, bubblegum turquoise – and the lightness of touch with which the wet paintbrush leaves its marks, gentle and almost tentative, as if brushing egg on to a pastry crust. Jane Adlin, a curator at New York’s Metropolitan Museum of Modern Art, lists Woodman’s art-historical sweep as including: “Minoan and Egyptian art, Etruscan pottery and classical Greek sculpture, glazes of the Tang Dynasty and idiosyncratic patterns of Japanese Oribe ware, Korean art, the vivid colours of Italian majolica, Sèvres porcelain, as well as the expansive, curvaceous forms of Italian baroque architecture and the exuberant paintings of Picasso, Matisse, and other 20th-century colourists”.3

Another comparison might, of course, be to the painted furnishings of the Bloomsbury group at Charleston. But Woodman is also uniquely herself and her works are joyful and comical, summery and enchanting. They celebrate the material quality of the clay, while also revelling in its malleability, even once it has been fired. “I’m giving myself two different sheets of paper, in a way,”4 she says, speaking of her combining of the 3D vessel with planar handles, or an unstretched canvas curtain or carpet, or a 2D painted surface. Like Picasso, Woodman sees faces and creatures where surfaces meet: “The handle, instead of being just a handle, becomes a gesture”.5

Upstairs there is a small room full of sketches, named solely with dates. These seem to be studies for her larger window works, of which she says: “You’re in the room but you’re looking out the window, you’re seeing beyond the room. In these pieces, instead of having it all be flat, I’m dealing with space.”6

In all her works, there is a sense of movement, of fluidity, with swirling colours adding to the peaceful (com-)motion. The six vases comprising Kimono Ladies (2015) – painted with Japanese ladies’ faces and wrapped in cloth/clothes – seem almost to enter into a dance with one another. The superimposed elements in Woodman’s works take life and appear to grow away from the canvases. For example, in The Summer House (2015), ceramic plates and jugs “stand” on the painted table while, in contrast, 2D foliage climbs out of a 3D vase. Her experimentations with space and dimension invite the viewer into a parallel world, a dreamscape comprising figments and fragments of imagination and memory. But are they creating the stage set for a dream or recreating that of a dream? Either way, the viewer is not the protagonist, but merely a passer-through, being merrily swirled this way and that en route. Let go and ride the wave, for whichever way you look at one of Woodman’s vessels, it will never appear the same way twice. 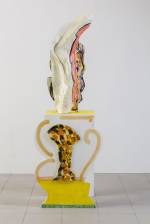 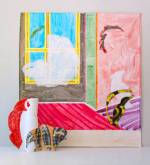