The Steins Collect. Matisse, Picasso and the Parisian Avant-Garde

The Steins Collect. Matisse, Picasso and the Parisian Avant-Garde

When Leo Stein settled in Paris in late 1902 it was with the same romantic intention, as so many before him, to become an artist. Dutifully he spent hours at the Louvre and Musée du Luxembourg, enrolled in art classes and found himself a studio adjacent to his flat on 27 rue de Fleurus

But what was more momentous was Leo’s decision to start buying contemporary art, purchasing his first Cézanne, The Spring House (c1879), from Ambroise Vollard’s gallery in 1903. In the fall of 1903, Leo was joined by his sister Gertrude, who moved in with her brother on rue de Fleurus. The following year, the siblings managed to persuade their older brother, Michael, and his wife Sarah and son Allan, to join them in Paris. Michael and Sarah originally rented a flat on rue du Fleurus, before settling at 58 rue Madame.

The exhibition, The Stein Collect. Matisse, Picasso and the Parisian Avant-Garde, previously in San Francisco and currently on view at the Grand Palais, Paris to 16 January and finally at the Metropolitan Museum of Art from 21 February to 3 June 2012, is the first to explore the collections of all four Steins. Primarily through her own career as a poet and self-promotion through her biographies, such as The Autobiography of Alice B. Toklas (1933), Gertrude has become, perhaps unfairly, the most well-known collector, but this exhibition succeeds in returning Leo, Michael and Sarah to their rightful positions as pivotal figures in the developments of European and American avant-garde art after the first world war. While before the second world war the collections were housed in Paris, the Steins corresponded and visited with some of the other great American collectors of Modern French art: Alfred Barnes, who visited the apartments in Paris in 1912, and the Cone sisters of Baltimore, who were old family friends and on whose behalf the Steins actually purchased several works by both Picasso and Matisse, which were sent to the sisters in the United States.

While financially secure, the Steins were hardly Rockefellers, but armed with a sense of adventure and discerning eye, the siblings managed to amass collections including over 400 works by some of the most renowned names in French art. With the help of Gertrude, Leo expanded their collection from Cézanne on rue de Fleurus to include works by the then relatively obscure artists, Matisse and Picasso, while Michael and Sarah, who had previously been avid collectors of Asian art, ceramics and textiles, collected almost exclusively the work of Matisse. Their rival Saturday evening salons, open to anyone who came with a written introduction, nurtured the fame and influence of their collections. Though many came simply to gawk at the art of the “wild” French artists, the Salons became a melting pot for the Parisian avant-garde, where Leo expounded his theories on aesthetics, and Matisse and Picasso came to mingle, hoping to seduce more supporters.

During its time at the Grand Palais, several of the works in the exhibition will return to the walls where the Stein’s first encountered them, the opening up of their own flats to the artists they collected nurtured both mutual influence and rivalry. When the Stein’s first began to collect Matisse and Picasso, Matisse was not only more established but considered to be one of the most innovative (or infamous) and adventurous artists of his time. Matisse’s Blue Nude: Memory of Biskra (1907) was first exhibited at the Spring 1907 Salon des Indépendants and quickly purchased by Leo and Gertrude, and at the time, was their most provocative acquisition to date. While Picasso had seen Blue Nude at the Salon, his further exposure to work hanging at the rue de Fleurus had a profound impact on his work. Both inspired and driven to surpass his contemporary, Picasso began to make a series of sketches in 1907 of women with a bent upraised elbow and crooked knee, mimicking the pose of the reclining model in Matisse’s painting. This same figure appears in several preparatory sketches for Picasso’s Les Demoiselles d’Avignon (1907), Nude with Drapery (1907) and Three Woman (1908), a work bought by Leo and Gertrude shortly after it was completed.

Aside from reuniting over half of the over 400 works of art that passed through the hands of the four Steins – a remarkable feat in its own right – the exhibition and its impressive catalogue manages to illuminate and expand upon a part of early 20th-century art history we thought we knew so well. Until the Russian collectors Sergei Shchukin and Ivan Abramovitch Morozov started buying the work of Matisse and Picasso, the Steins combined had the largest holdings of works by the two artists. But beyond providing an opportunity to see the marvelous works of art the siblings collected, the true highlights of the exhibition are the small displays devoted to the Steins themselves. These illuminate Leo’s work on aesthetics, which he began in 1902 when he spent time with Bernard Berenson in Florence, but which he did not publish until the 1930s. The displays reveal that Leo not only had a keen eye for art but also was well versed in emerging formalist discourse in art history. Sarah and Michael’s personal relationship with Matisse is also explored with great success. In 1916 Matisse painted companion portraits of the couple, the only examples of this type of portraiture the artist ever painted. Displayed alongside letters written by Sarah to Matisse, postcards from the artist to the young Allan, and notebooks filled with plans for the art school Matisse set up and ran from 1908 to 1910 with the help of Sarah and Michael, the individuals themselves are reconstructed to reside amongst the works of art they collected. 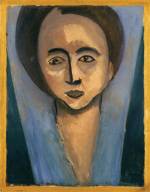 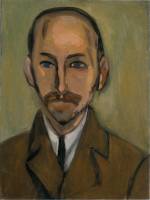 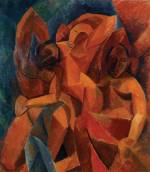