Baldock looks as if he is having fun, pulling faces in mud and decorating them in glaze, and the mood is infectious. He seems less interested in the details of cultural history than in producing the aesthetic of the ruin from pick’n’mix sources 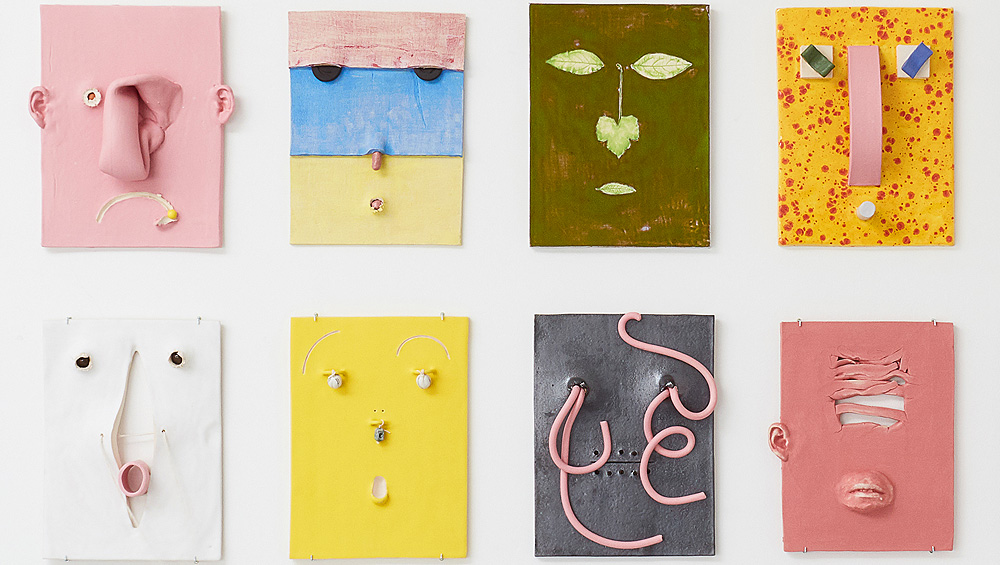 There exists a trend among British ceramicists to produce mystical looking artefacts. Aaron Angell, founder of Troy Town Pottery, makes models that look as if they were created by the kind of guy who brews his own ale and calls it Dragons’ Bloode. Jesse Wine invented a special glaze made from rust to make his pots look extra old and portentous. And then there is Jonathan Baldock (b1980, Kent), artefact maker du jour, whose exhibition Facecrime is currently on at Camden Arts Centre – the fruit of Baldock’s Freelands Lomax Ceramics fellowship at the centre in 2017-18. 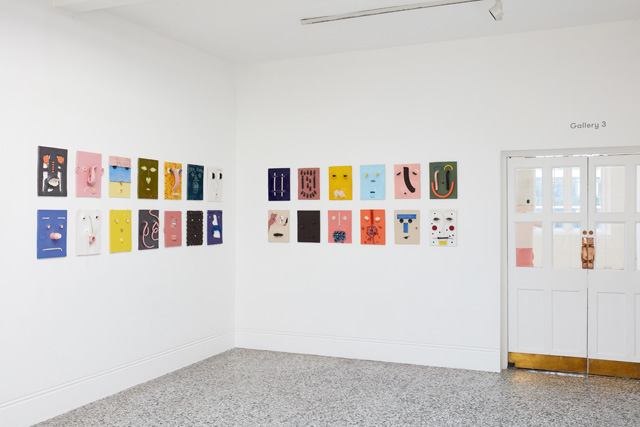 In Camden’s upstairs corridor, 42 rectangular ceramic tiles are fixed to the walls. Each has been given its own colourful face. There are pink curly snouts, extended tongues and smiling mouths filled with fluffy orange balls. A text on the wall explains that Baldock is interested in “contemporary primitivism”. The faces look like the product of a make-your-own-tribal-mask table at a school fete, where a cultural conscience about Britain’s colonial past has yet to call time on that sort of activity. 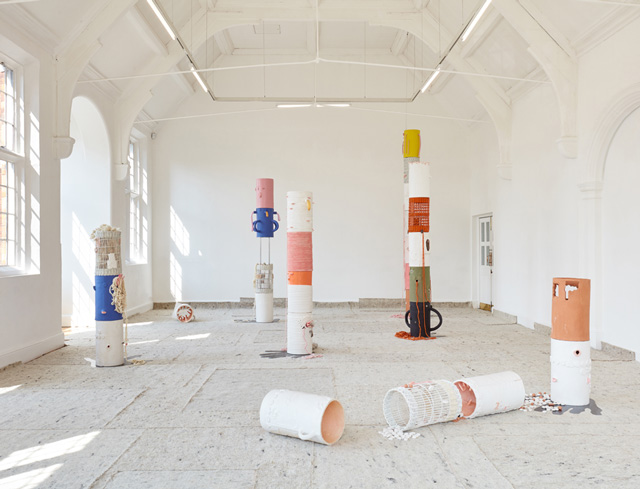 The adjoining light-filled gallery is filled with a series of objects based on the appearance of totem poles, constructed from sections of fired clay interspersed with pieces of basketry. Some of the “poles” are standing while others are scattered in pieces across the floor, following a compositional trend in 18th-century painting for depicting architectural ruins. In places, casts of ears and fingers have been attached to the inside and outside of the clay, and the bases are decorated with bits of wool suggestive of tufts of hair, as well as clay tokens that the artist has engraved with emoticons. 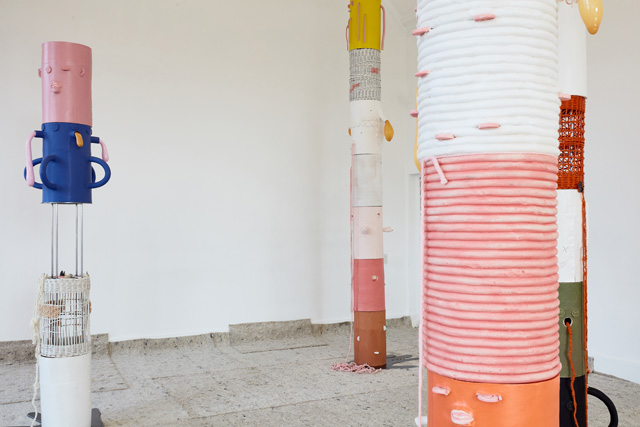 Standing before Baldock’s stacked columns, I think of the totems the Italian designer Ettore Sottsass compiled from slick, glazed ceramic pieces in the 1950s. In the 80s, Sottsass would go on to form the Memphis Group, a collective of postmodern designers who eschewed the dogma that form should follow function, opting instead for bombastic ornamentation. Unlike Sottsass, however, who favoured an industrial finish, Baldock is happy to remain in the comforts of a naive, handmade style. His clay is cracked and wonky, his glazes applied loosely and liberally.

Bearing the hallmark of the contemporary ceramic artefact-maker, Baldock’s work has a peculiar relationship to time, using a hotchpotch of historical references to reflect on the present day. Facecrime, for example, is inspired by the discovery in Syria in 1974 of the Ebla tablets – more than a thousand clay artefacts bearing logograms produced around 2500BC, found in the former archives of the kingdom of Tell Mardikh. A fire in the palace performed an unintended act of restoration, baking the previously unfired tablets and thus preserving them. They revealed lost histories of recorded language, and provided a remarkable insight into the culture and administration of bronze age Syria. Baldock’s take on the Ebla tablets is to compare them with today’s logogram of choice: the emoji. Facecrime is filled with clay renditions of smiling, winking and cringing emoticons. “Imagine future humans looking back at us now,” the work seems to say to the viewer. “What would they make of all these smileys? Would they consider them currency? Religious icons? The primary units of language?”

Facecrime belongs to a cultural trend that the writer and critic Brian Dillon has called “ruin lust” – an obsession with ancient ruins that speaks as much of any interest in the past as it does of a “fretful modernity”. As Dillon puts it, the “sense of having lived on too late, of having survived the demolition of past dreams of the future, is what gives the ruin its specific frisson, and it still animates art and writing”. Baldock’s link to Ebla is tenuous, but this is not a historically rigorous exhibition. After all, totem poles have little to do with Syria (or clay, for that matter; traditionally, they are carved from wood), and neither Ebla nor totem poles have anything much to do with George Orwell’s dystopian novel Nineteen Eighty-Four, from which Baldock took the exhibition’s title. “In any case, to wear an improper expression on your face (to look incredulous when a victory was announced, for example) was itself a punishable offence,” says Orwell’s protagonist, Winston Smith, describing the terror of surveillance in the fictional superstate of Oceania. “There was even a word for it in Newspeak: facecrime, it was called.”

If and when contemporary or future humans survey Baldock’s sculptures, it is unlikely they will find themselves pondering an Orwellian nightmare, or fearing the terror of surveillance. Bar the title itself, the shady side of social media – the propensity to have your movements recorded against your will, your data trail captured and logged – is entirely absent among the grinning faces and childlike palette. (So, too, are the more interesting uses of emoticons, such as the ways in which they have been appropriated for erotic means: the aubergine, for example, which took on a life of its own as a tumescent penis.)

It is hard to sustain critical thoughts when faced with an artist who is clearly really enjoying himself. Baldock looks as if he is having fun, pulling faces in mud and decorating them in glaze, and the mood is infectious. In the end, Facecrime seems less interested in the details of cultural history and more invested in producing the aesthetic of the ruin from pick’n’mix sources. Perhaps the attachment to the ruin is a way to speak of his own experience as a contemporary ceramicist. Craft has a hard time of it in the fine arts, and it often seems practitioners feel they must constantly justify their relevance in a post-industrial world. The struggle may have produced something of a cul-de-sac, in which artists try to remove themselves from the bind by producing semi-ironic artefacts, punning on clay as an ancient or museological material. Walking through the gallery, I wondered what would happen if Baldock were relieved of this load.