Jean Nouvel has conceived a masterful new structure for the Louvre Abu Dhabi, at once utterly modern in its technical and environmental specifications, but beautifully attuned to the ancient Arabic sense of place, and affinities with geometry and astronomy

“You enter through a stone corridor, which is absolutely neutral, plain, devoid of decoration, and which opens suddenly into something absolutely stunning in terms of its decoration, its preciosity.”1

Jean Nouvel, Pritzker Prize-winner and arguably France’s greatest contemporary architect, is actually describing the Versailles Theatre. But he could just as easily be describing the Louvre Abu Dhabi. 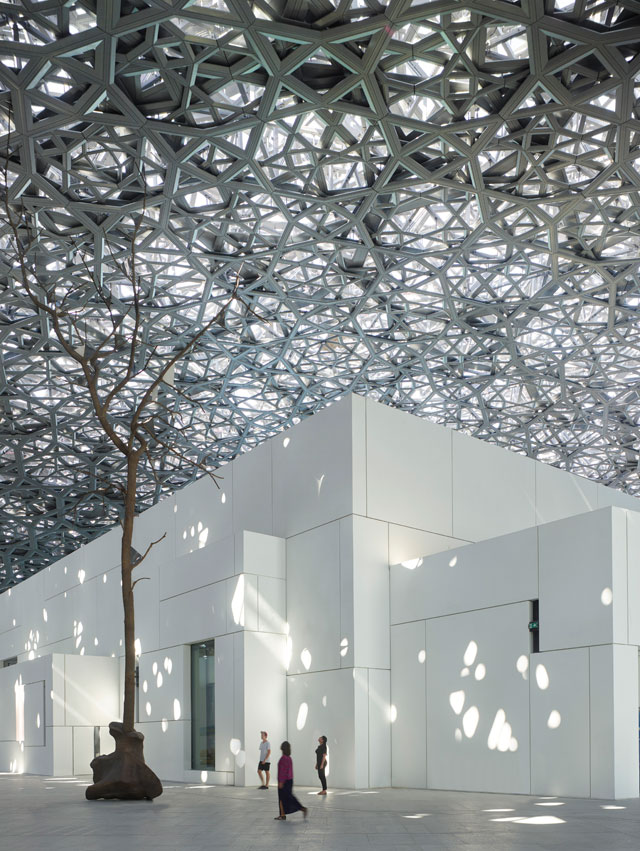 There are many achievements that Nouvel should be congratulated for, with this first public temple to the arts in Abu Dhabi. His exquisite new structure manages to be completely true to the architectural and decorative vernacular of the Middle East and yet utterly modern. But perhaps its greatest contribution to this city of borrowed architectural forms, of glistening skyscrapers straining to outdo each other as expressions of excess and prestige, is the creation, through form, materials, placement and programming, of an emotional and aesthetic journey that is both humbling and spectacular; it is utterly masterful, unique. 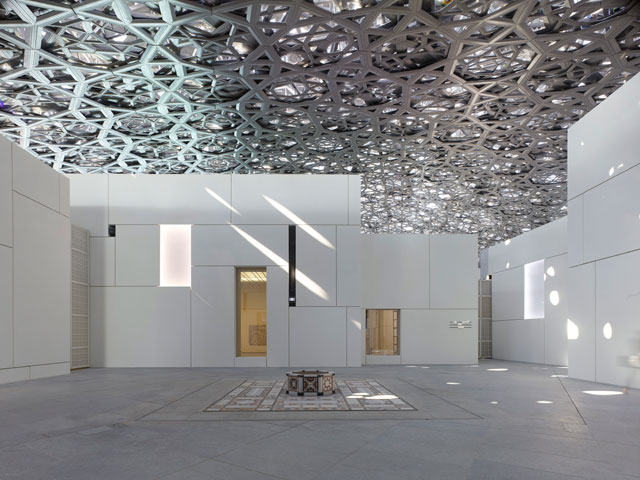 Timing is everything, in architecture as well as comedy: the way you pace a “big reveal” such as the one Nouvel has designed into this complex, is crucial. And the low-key approach to this barely emerging arts district on a brand new island reclaimed from the sea is about as underwhelming as it comes. Off the coast of Abu Dhabi and accessed by two bridges, Saadiyat Island seems to be all rubble, cranes, trucks and freshly planted palm trees. Just visible from the vast car park, the Louvre Abu Dhabi nestles into its site, with the least dramatic of museum entrances set deep into a collection of low, cuboid, white concrete buildings, with the sea lapping at its walls. As you proceed through the tranquil, unadorned entrance lobby, reception, cloakroom and shop, the sense is of processing through a stone temple. And then comes the transition outdoors, into the first of many plazas, to be dazzled by the extraordinary confection overhead – a giant dome, designed to signify the sky, the constellations represented by almost 8,000 geometric stars that form a metal parasol. Their perforations throw a magical patterning of light across floor, walls and water. This “rain of light” as Nouvel calls it, shifts and transforms as the sun passes overhead, like a cosmic glitterball. The effect is breathtaking. 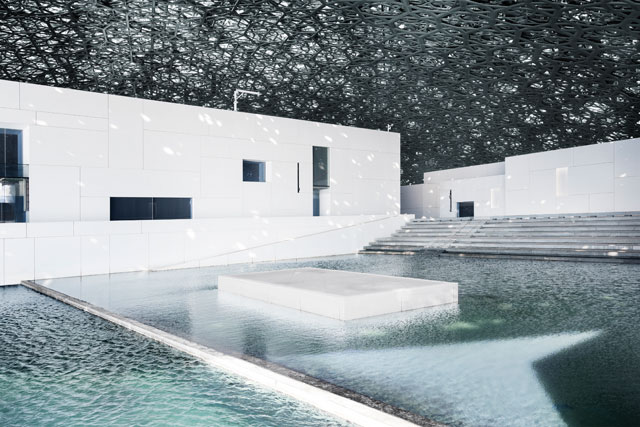 “The whole museum is about belonging to the space, to the history and the climate,” says Nouvel, at the press preview. “It is a building that speaks of the sun, the sky and the sea.”

An evangelist for “singular” or “contextual” architecture – architecture that speaks of its specific time and place – he says: “The disaster of the epoch today is the damage of the generic building, parachuted in everywhere, to all the metropolises … This building is the opposite of that. It belongs to the territory, to the history. Every sign and symbol of this building is linked to Arabian culture.”

The museum is conceived as a traditional Arabic medina. Its white, mostly single-storey structures are arranged around a number of public squares and promenades, most of which are oriented towards pools of lapping seawater. Shaded and cooled by the cover this metal canopy provides, the light that pours through it is intended to evoke sunlight through the leaves of palm trees. 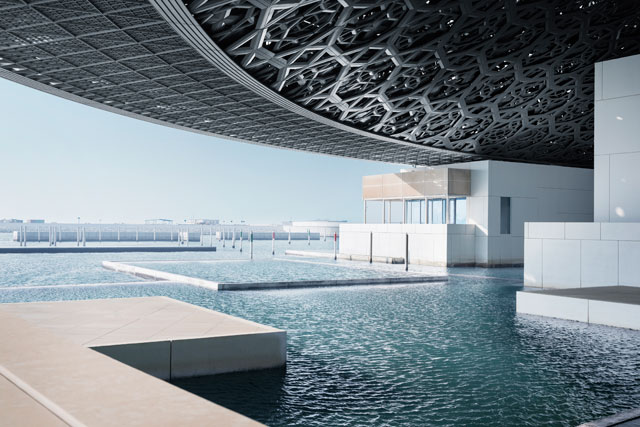 But, says Nouvel: “The idea is to have enabled more than the building, to have a microclimate using the idea of the sea and the wind, the breeze.” Protected from the scorching Middle Eastern sun by this metal dome, even at midday one is aware of a gentle sea breeze being cooled as it crosses the water, and is channelled through the museum’s “streets”. There are 55 buildings in the museum city, including 23 galleries both permanent and temporary, and a children’s museum. Additional, standalone structures include a two-storey auditorium, for events and screenings, while a two-storey restaurant and cafe – still under wraps during our visit – is placed at the outer, seaward edge.

While authentically Arabic in form, decoration and symbolism, it is still one of the most innovative and challenging museum projects ever conceived. The building facades are made of 3,900 panels of ultra-high performance concrete. The dome, designed together with BuroHappold, is made up of eight layers of metal: the outer four are clad in stainless steel and the internal layers clad in aluminium, separated by a steel frame. Its geometric design has been computed and refined via cutting-edge software and scale modelling in a sky lab, to provide optimal levels of light and shade. The sunlight is so strong at this point on the globe that only 1.8% of it is allowed to penetrate the structure at any time. What’s more, the sun does not pierce it directly, but percolates through each layer, to provide the right amount of cooling and shading in this region’s intense temperatures. Nouvel says: “The sun is like a huge projector and it is moving around the dome. The shadows it creates will change at different times of the day, with different light stains (‘taches de lumière’) appearing on different buildings. So you will never see the same light twice in one day.” 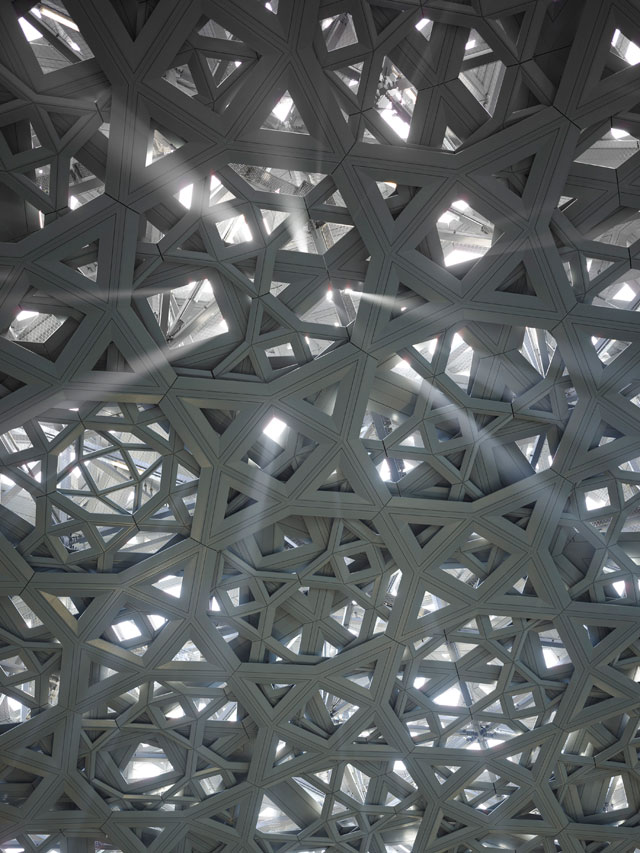 The impressive 7,500-tonne dome (weighing almost as much as the Eiffel tower) is 180m in diameter, supported by four permanent piers, each 110m apart. These are hidden within the two-storey buildings, so that the dome appears to be floating or hovering over them. Both beautiful and functional, the dome reduces energy consumption inside the buildings through solar shading and strategic daylight provision, and creates a comfortable microclimate, allowing visitors to circulate outdoors – a rare treat in such brain-melting temperatures.

The Louvre was appointed as museum partner after Nouvel had won the international architectural competition – adding a cost of $525m (£400m) for a 30-year lease of the Louvre name and expertise, compared with the $108m cost of the structure itself). While Nouvel says his “Frenchness” was pleased at this connection, it meant that the original plan had to be completely reworked. But here is where his “museum as city” typology shows its advantages. Like its inspiration, the traditional medina, the buildings can be expanded, shrunk and reconfigured indefinitely, as needs dictate, but still remain a coherent entity, under that sheltering dome. 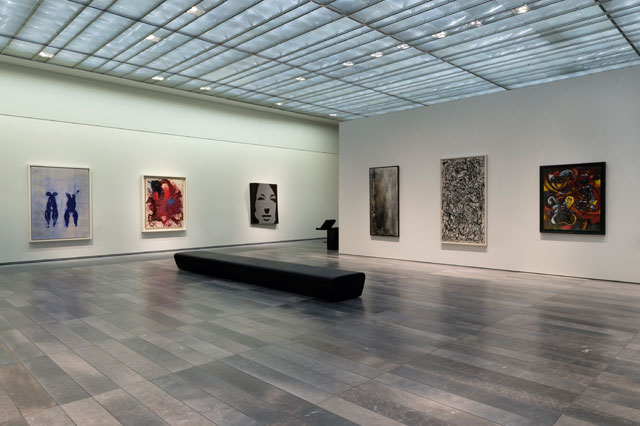 Nouvel’s remit was later expanded to cover interior design,  “scenography” as well as “museography”, and the shared cultural and linguistic sensitivities must have helped the close coordination required as his team worked alongside the Louvre’s to devise the placement, dimensions and programming of the galleries. Now all the interior spaces bear his hallmark, from the continuity of fine white concrete on interior and exterior walls to the same Italian granite flooring in public spaces inside and out; together, they generate a seamless feel between outdoors and indoors. 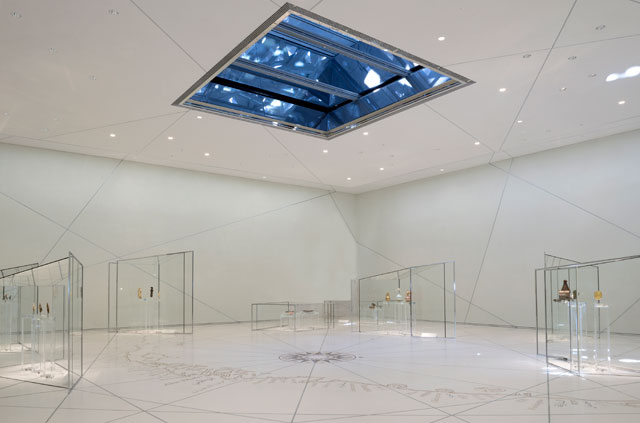 He also designed the furniture and fittings – everything from the slick, black lacquered display stands for exhibition pamphlets and audioguides to the long, black leather sofas that offer respite in the lobby and waiting areas. This neutrality of tone in walls, floors and consistent, dark, furnishings, brings the cultural icons that are displayed in each area to the fore, along with the pleasure of promenading and people-watching – another nod towards the cultural preferences of these scorching climates; the museum will stay open until 10 each night, to accommodate the regional taste for after-hours socialising. 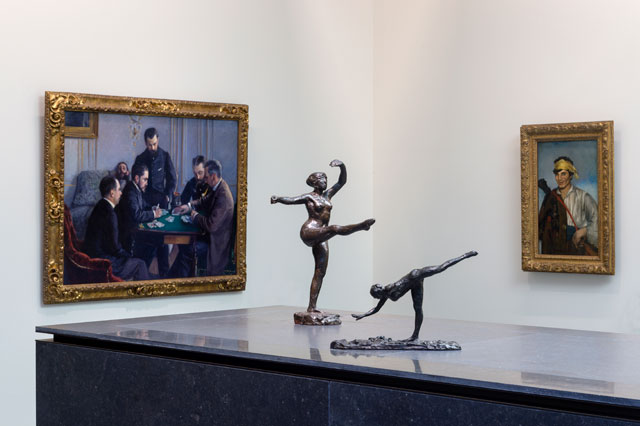 Nouvel had imagined the interiors as a contemporary palace, with gallery dimensions designed to suit the objects and eras they host. They are high-ceilinged and cleverly lit, incorporating as much natural light as possible. This comes either from the galleries’ connecting, interstitial spaces, whose deep windows offer veiled views on to the sea, or through zenithal lighting involving glass mirrors that capture sunlight and direct it into the gallery interior. There are 17 glass ceilings within the complex.

Each gallery floor includes an inlaid section of marble slabs, outlined in bronze and combined into a huge “rug”, featuring a specific stone, chosen to complement the room’s contents, geographically or aesthetically. Nouvel, together with the Louvre team, also designed the bespoke bronze display cases, fabricated by Meyvaert Glass Engineering in Ghent, so that they offer a monumental scale appropriate to the room’s dimensions but also the selected objects. 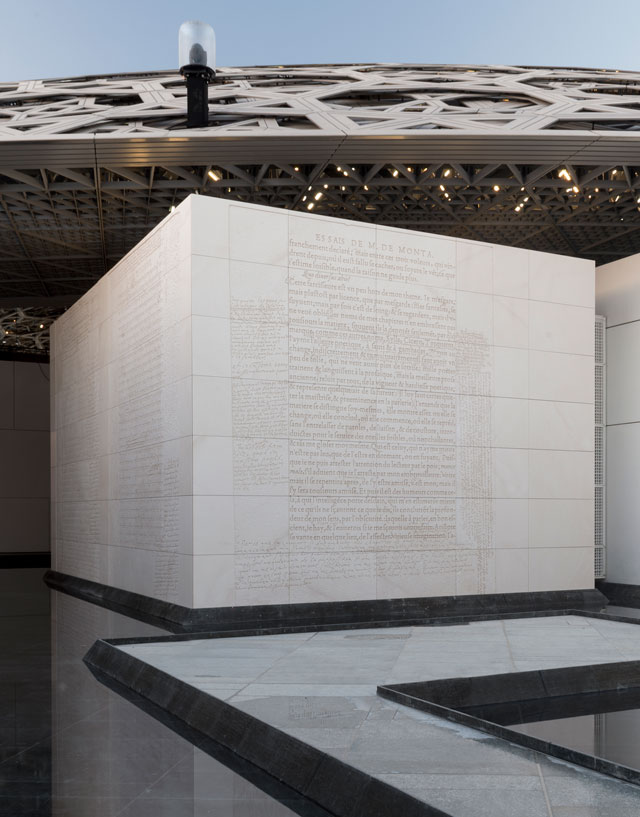 Around the exterior courtyards, there are specially commissioned artworks from Jenny Holzer and Giuseppe Penone. Holzer’s contributions include three huge text-pieces carved on to stone (they are in Arabic, Roman and cuneiform scripts). Penone’s works include a huge bronze tree, with mirrors placed in its branches to reflect the dome’s “rain of light”.

There has already been bickering among cultural commentators that the region’s elite – especially Emiratis, often raised in great material affluence but in strongly conforming and often insular environments – will be insufficiently interested in, or curious about, the global icons of the last two millennia to bother coming here. Will the vast “underclass” of workers from Africa and South Asia even be allowed in? (And with this still unknown, combined with the UAE’s dreadful track record for the treatment of migrant workers, it is surprising to see that Ai Weiwei has allowed a work of his to be presented here). The target audience is unclear. Why would Europeans (other than expats living nearby) take the trouble to come all this way to see the usual checklist of greats – from Egyptian sarcophagi to the Louvre’s premium loans by Vincent van Gogh, Leonardo da Vinci, Paul Cézanne, Claude Monet, Camille Pissarro, Alberto Giacometti and Jackson Pollock – when they could see them much closer to home. But there is a stated desire from the ruling elite to inject more creativity and culture into the sun-sea-sand-shopping tourist formula, as well as the wider cultural landscape. Creative industries are now being encouraged as a means of generating incomes when the oil runs out, supported by a small but growing programme of arts education, in which this collection now plays a pivotal part.

When this building was first awarded to Nouvel, the plan was to have five “great” museums by five world-class architects, but there is little evidence of it today. Tadao Ando’s Maritime Museum and Zaha Hadid’s vast performing arts centre are still unbuilt. Frank Gehry’s Abu Dhabi Guggenheim (like his Bilbao structure, but on steroids) also seems to have stalled, although the Guggenheim has a presence in the region and has embarked on its collection. Construction for Foster & Partner’s Zayed National Museum is apparently under way, supposedly curated in partnership with the British Museum, but local sources at the Louvre Abu Dhabi press event hinted that the British Museum had recently closed up its Abu Dhabi office and left town. However, the government publicity claims that they will all complete within the next decade, at a total construction cost of more than £20bn, leaving the region with five monumental cultural destinations.

For now, senior Louvre Abu Dhabi executives hope that theirs alone can be a draw, emphasising it as the first museum “to focus on shared human stories across civilisations and cultures”. They must be delighted with Nouvel’s design: an extraordinary technical and aesthetic achievement, somehow simultaneously futuristic and authentic. For this alone, people may just be persuaded to travel thousands of miles – or add Abu Dhabi to their list of cultural hot spots.

Reference
1. Taken from The Singular Objects of Architecture, a conversation between Jean Nouvel and Jean Baudrillard. 2005