Lothar Götz – interview: ‘In Britain, people think abstraction is just beautiful, but for me it also has a political aspect’

Lothar Götz – interview: ‘In Britain, people think abstraction is just beautiful, but for me it also has a political aspect’

Artist Lothar Götz talks about designing a monumental mural for Towner Art Gallery, the politics of the Bauhaus and why he rejected figurative art 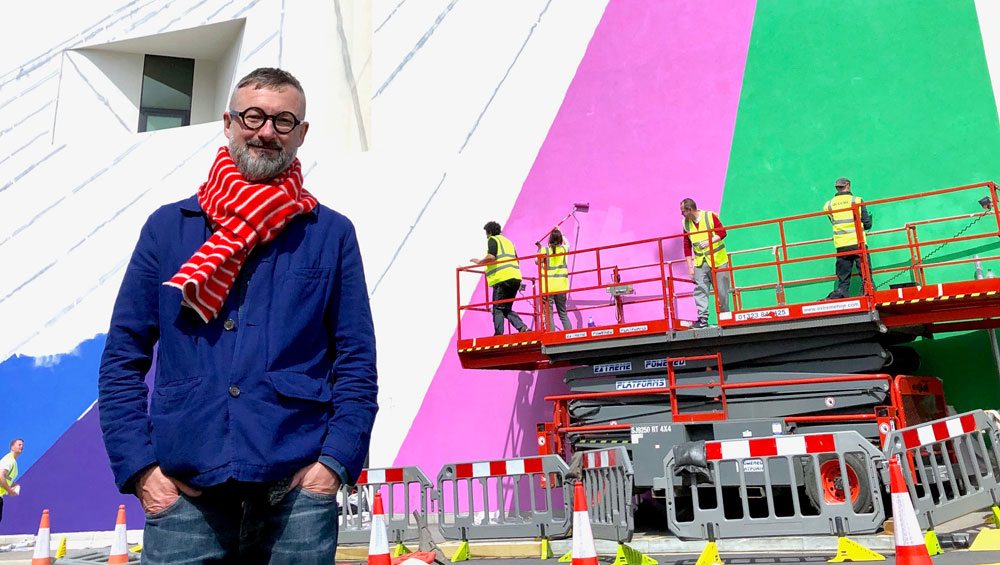 Towner Art Gallery sits in the heart of Eastbourne on the south coast of England, just striking distance from the town’s Victorian pier. Its curved white walls and embrasure-like windows give it the look of a battlement or a chalk cliff face, modern, minimal, but perfectly suited to its surroundings. This purpose-built building was completed 10 years ago and, to celebrate, the trustees launched a competition to design a mural to cover the façade.

Sixty designers submitted their proposals, but it was London-based artist Lothar Götz (b1963, Germany) who won the commission, with his brightly coloured diagonal stripes, which radiate out from various corners of the building. The mural was begun on 8 May and is due to be officially unveiled 15 June and will remain in place for one year.

This is not Götz’s first mural commission, but it is certainly the largest project he has worked on. “I found it so exciting when I read the brief for the competition,” he told me. “They really want the whole building painted and that means you can turn a whole building into an artwork – it becomes like a sculpture. I made two designs and they selected the more radical one, which was great.”

Götz’s preference for abstraction goes back to his childhood in Germany and is deeply affected by the turbulent history of the Bauhaus. I spoke to him about the Towner Art Gallery commission and his very personal artistic journey. 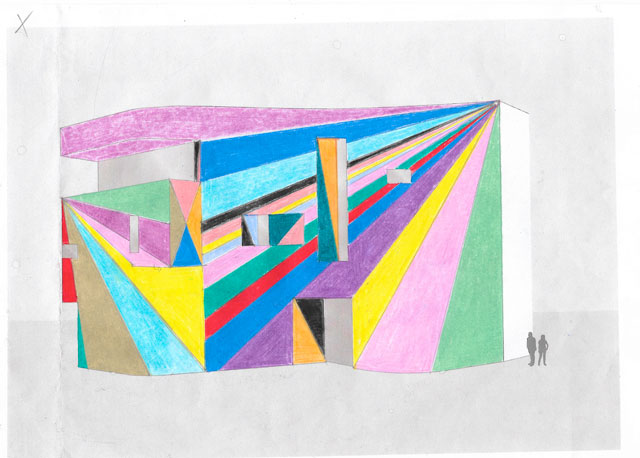 Emily Spicer: When you make a mural design, are you in some way collaborating with the architect, or at least the building? Do you feel a need to honour their intentions?

Lothar Götz: It feels very much like a cooperative practice. I never meet the architect, but the moment you respond to any space, you respond to an idea. [With the Towner Art Gallery commission] the first thing I responded to is the building itself, because the architecture is quite striking, with its size and its curves. This is not a very decorative building, like a Victorian building, but still there are alcoves and this and that. I responded to that and that response has something to do with what the building offers me. In an ideal situation, the building tells me what it wants. It feels like a cooperative practice. There is a spirit, there is an aura, a history.

ES: How will you reconcile the straight lines of your design with the curves of the building?

LG: I’ve done works on curved walls before. I did one in a museum in Germany called MARTa Herford, which is a Frank Gehry building, and I made a very straightforward geometric design. And because it was layered over a curve, the geometric design became like a leaf, so it looked really organic and changed dramatically from what it was before. [Towner Art Gallery] goes in and out, a bit like a wave, and I don’t know how much that will change the perception, because from every angle these lines will change. I’m very much looking forward to that. I think the rigidness of the geometry will be softened by the curves and it’s the thing I’m most excited about. When I did some research into the building, there were some things mentioned about it looking like a cliff or a like a wave or a response to the seaside, and I think this will become part of the wall painting as well.

ES: Driving here, I passed a row of beach huts and it occurred to me that a mark of British seaside towns is colour, colourful houses and arcades and piers. Is your use of colour particularly suited to an area like this? And how do you choose which ones to use?

LG: These colour decisions are purely abstract decisions. When I was here, doing some research, all the elements you just mentioned fed into that a bit. And I find it striking that the moment you approach a seaside town, the sky looks suddenly different and that is why I usually make all the main decisions on site. Sometimes, I walk around for a whole day just breathing in the area, breathing in the atmosphere. And I did walk to the seafront and was taken by the palm trees and how almost tropical it looks.

Very often I reach a moment of despair when I don’t know what I should do and it’s a case of emptying my head of everything else. I did use a few blues in response to the blues of the sky, but I’m not working literally, where I would say, OK, there are coloured beach huts. But one could. It could be a strategy, or a method and there’s nothing wrong with that.

ES: How do you feel about the fact that this work will be painted over in a year’s time?

LG: It’s a bit like dressing something up. Where I grew up, there was a huge carnival tradition. Every year, I really looked forward to carnival because I love to dress up. I had a harlequin and a mushroom costume and a few times I dressed up in female clothing and I loved changing. I think it will be a little bit like dressing up the gallery; it is getting a colourful skin.

ES: What impact do you hope this project will have on the local area?

LG: I want to address reception, to address how we see the world or how we see our surroundings. I think, as well, that a purely abstract work like this has a political aspect, it changes how we react to our surroundings and it makes us more active and aware of things. If something has suddenly changed, then you might look at change differently, or it might change your view towards something else.

ES: Who or what do you draw your inspiration from?

LG: Modernism and the Bauhaus probably had the biggest influence on me. When I was a student, I became completely fascinated by the Bauhaus and what I liked so much was that they did not create a distinction between painting, sculpture, theatre and textiles – let’s say the fine arts and the applied arts. They broke these boundaries. I was always a huge fan of Josef and Anni Albers. There was a social aspect [to their work]. [They] created a very positive world and manufactured something that a lot of people could afford – something beautiful for the masses, not just for the few.

The one thing that I always came back to was The Triadic Ballet by Oskar Schlemmer. This was one of the first works I really identified with. When I was a young student, I found it quite difficult. I always wanted to be an artist, but art was taught in a very narrow way at the academies. I always thought, I can’t identify with this. And then, in the late 80s, early 90s when I finished my studies, I wanted to be a painter, but couldn’t identify with painting because painting for me was too much driven by genius or a certain aesthetic. I felt closer to theatre and performance and other things. I thought, as well, that even serious abstract painting was too hetero-male for me, even when I loved the works.

What I loved so much about the Bauhaus was that it was very playful. I mean, the Triadic Ballet costumes are amazing. I think the original costumes do not exist now, but they have fantastic reproductions in Stuttgart and it’s a sort of abstraction mixed with real-life experience. I was always interested in movement and, for a while, I wanted to become a dancer. The title of this commission is Dance Diagonal. I see it as a dance of shapes, a bit like a choreography. You choreograph on stage like you compose a painting.

ES: You said that the judges chose the more radical design. In what way is this design more radical than the other one?

LG: I thought [the other design] would be easier to execute and it was a bit quieter, colour-wise, a bit more subdued. There were no diagonals – only horizontals and verticals – and the title of that was Geometric Dance. In my mind, I was making a little bit of a compromise, thinking about practical problems. It was what I would call a safer painting. The [chosen] design was really more of a sketch. I very much preferred it and I thought it was really brave [of the jury] to choose that design for a publicly visible project. 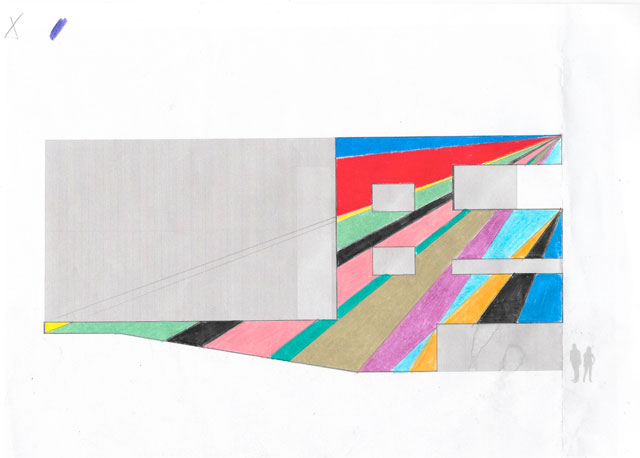 ES: You mentioned that your work has a political aspect.

LG: Yes. People think that to be political, something has to be really, literally political. I felt that abstraction and working in the spirit of the Bauhaus was a continuation of art that was labelled degenerate by the Nazis and which artists could not practice openly in Germany during that period. So, for me, abstract art was always political. A lot of my schoolteachers came out of the Nazi era, and figuration was not something I wanted to do because I related it to very negative things. It was only when I came to Britain that I met people of my generation with a completely different perspective.

ES: You’re talking, of course, about the Nazi preference for realism, and the fact that Bauhaus was suppressed under Hitler. Are you saying your teachers were still carrying those biases with them?

LG: I don’t want to generalise. It was, perhaps, not so much my art teachers, but it was more a general option about what art was. I don’t want to accuse my tutors at university; they were not necessarily ex-Nazis and I think many of them were very much against that. But then the art in the schools was still very much, I wouldn’t say Nazi, but change was slow, and people did not value abstract art. I experienced that all the time and I felt it was very weird. But all the things that interested me were things that were banned during the Nazi period.

I still think that the whole modernist, Bauhaus movement has not recovered. In terms of the soul [of the movement], it was a huge destruction, to people, obviously, but also to an ideology. I think this is why Germany had this more straightforward modern movement because, I think, for a lot of people it was nearly impossible to go back. And I grew up a gay boy, or a gay man, in a town where there was nothing I could identify with, so I looked at things that are a little bit outside. And the Bauhaus was quite clearly the first time I felt, yes, that’s what I want.