Paul Klee: Making Visible at Tate Modern is an outstanding exhibition of 130 works by one of the masters of the 20th century. His vibrant colour, exquisite line and amusing narratives are poetic and life-affirming; the exhibition is a deeply rewarding experience.

The works of Klee, one of the most inventive, independent and highly influential artists, require particularly close individual attention. Rather more like reading a book or a musical score, studying Klee’s works in the vast galleries at Tate Modern was potentially problematic. Curator Matthew Gale responded not by making the overall scale of the hang small to match the works but, following on from the initial series of intimate rooms, he has enabled the viewer to move in to galleries where, on large walls, single, tiny jewel-like works can be given the level of concentration required. Images that are well known and utterly familiar still have the capacity to startle, their whimsy and invention having not diminished in their capacity to reach beyond the physical forms they appear to reproduce. As Klee stated in 1920: “Art does not reproduce the visible; rather, it makes visible.”

Gale has also paid attention to the strict chronology instigated by the artist himself, who from 1911 inscribed every finished work with two numbers: the first was the year in which the work was made and the second was its place in the number of works made so far that year. As a consequence, it is possible for scholar and viewer alike to trace with absolute precision the manner in which Klee’s artistic development evolved. Klee’s was a progress of great subtlety rather than dramatic change, yet often a painting on one day did not resemble one done a day later. The exhibition Paul Klee: Making Visible is accompanied by a fully illustrated catalogue, which is informed by recent scholarly research into the artist’s remarkable career.

In current drawing practice and research, Klee’s statement that “Drawing is to take a line for a walk” is often cited. In his remarkable Pedagogical Sketchbook, Klee created one of the most famous documents of modern art. Here, a poetic introduction to the visual arts was created for his pupils at the Bauhaus, where he was a teacher between 1921 and 1931, based on his extensive lectures on visual form. The Bauhaus movement had emerged as architects and artists began to rebuild war-torn Europe after the first world war. Walter Gropius, the first director of the Bauhaus, attracted artists such as Klee, Wassily Kandinsky, Oskar Schlemmer and Lyonel Feininger.

In symbolic terms, and as a utopian experiment, the Bauhaus became greater than the institution itself. In terms of influence all over the world, the Bauhaus served to disseminate an inspired and remarkable philosophy and teaching programme. The English architectural critic Reyner Banham described the Bauhaus at Dessau as a “sacred site”. He was referring to more than the building itself: its solemn history, the altruism of so many individuals who taught there or attended it, and the sum of outstanding artistic achievement in many fields of the arts that has made it an international institution of profound importance. When the Bauhaus was founded in Weimar in 1919, the artists were committed to re-examining the very basis of art that would, in turn, touch every aspect of life. The utopian spirit in postwar Germany gave rise to the belief that the artist could help to bring about new social conditions through the creation of environments, and this became the focal point for such thinking in Europe in general. Originally handwritten – as a pile of working notes he used in his lectures – Klee’s Pedagogical Sketchbook was eventually edited by Gropius, designed by László Moholy-Nagy and published in 1925.

Pedagogical Sketchbook represents the spirit of the time as exemplified by the Bauhaus, and also Klee’s remarkably ordered approach to the visual arts. It has played a pivotal role in art education and has also deeply affected our thinking of modern art. Just as his large oeuvre prompts us to reconsider the artist’s place in society and the individual’s within the cosmos, his writings constitute a stage where imagination and science meet. Sibyl Moholy-Nagy, who translated it into English in 1953, also wrote an introduction, and László, in a concluding note, described the great work as “an adventure in seeing”.

Klee recalled: “When I came to be teacher, I had to account explicitly for what I had been used to doing unconsciously.” He made more than 3,000 handwritten pages. The Thinking Eye, much more extensive in scope, was written in the same period but was only published and translated in 1956 after his death. Klee challenged conventional perception and navigated a path for students and subsequent viewers to a metaphysical and spiritual place. Based on intuition, and rejecting socially constructed ideas that he claimed were deceptive, Klee is an artist one wants to visit time and again. During this period Klee’s output was extraordinary. “The garden”, a metaphor for continual growth and change, was used to parallel the spiritual preoccupations of the period, which Flower Bed (1913) and Plants in the Mountains (1913) reveals. Music was always a central interest for Klee, who had to make the decision between pursuing a career as a violinist or becoming a painter. Before his death in 1940 he produced in excess of 10,000 works of art. Klee’s work is pure pleasure, analytically subtle and exacting.

Klee was born in 1879 in Münchenbuchsee, near Bern in Switzerland to a German father and Swiss mother. He was given German nationality. He and his elder sister grew up in a home devoted to music, his parents both musicians and teachers. Klee studied violin to concert level. He studied painting from 1900 with Franz von Stuck in Germany, but became frustrated with the academic course and so left and travelled in Italy. There he felt dismay and inadequacy in the face of the great art of the past and returned home. He made a concerted effort over the next four years to read, study and experiment to find an artistic identity of his own. A breakthrough came when he discovered his childhood drawings in his parents’ attic, believing them to be more important than anything he had done to date. In 1906 Klee married musician Lily Stumf and their son Felix was born the following year.

In 1911 Klee was introduced to Kandinsky, which in turn led to his joining the Expressionist group: Der Blaue Reiter (the Blue Rider). As well as Kandinsky, members of the group included August Macke, Gabriele Münter and Franz Marc. Klee became particularly close to Marc. The following year, 1912, in a review of the first exhibition of Der Blaue Reiter, Klee asserted that modern art needed to engage with people on the margins of society, such as the mentally ill: children’s art, he believed, held the mystery and candour that often became lost in the process of socialisation. Klee also urged artists to study ethnological collections, to explore other cultures. He travelled to Paris and saw the work of Pablo Picasso, Georges Braque, Henri Matisse and Robert Delaunay. Cubism and colour theory, which he absorbed on this trip, played a formative role. Then in 1914 he made a trip to Tunisia with Macke and Louis Moilliet that was to prove pivotal. The effect of light on Klee’s work becomes most visible: works done in 1912 are muted compared to Opened Mountain (1914). The watercolours created in Tunisia and the artist’s experience of Arab architecture, music and culture became a turning point in his development. By the following year, Klee was highly productive, seeing abstraction as a means to dissociate himself from a world at war: “The more horrible this world, the more abstract our art.” The death of his friend Marc on 4 March 1916 was devastating for Klee. Just a week later he, too, was drafted into the army. The death of a significant number of artists led to a change of policy; Klee was assigned to an air force maintenance company near Munich, a safe distance from the front. By 1917, based near Augsburg, he was allowed some time to paint. Then, after the Armistice on 11 November 1918, he returned to Munich. Civil unrest in Berlin led him to join the Action Committee of Revolutionary Artists for the newly formed Bavarian Soviet Republic, but following the military arrest of supporters, he visited his parents in Switzerland. In Zurich he met Hans Arp, Hans Richter and Tristan Tzara, whose Dada performances were in response to the hellish violence and death during the first world war.

The economic crisis continued into the 1920s and led to the halving of Bauhaus funding; with Gropius, Kandinsky and Georg Muche, Klee helped to negotiate the relocation to Dessau. Klee by this stage was exhibiting widely, with great reception including high praise from Louis Aragon in 1925 and Alfred H Barr in 1927, prior to an exhibition of 65 works at the Museum of Modern Art, New York (1930). The Klees moved to Dessau in 1926 for the opening of the new Bauhaus, but after four years he found the workload too onerous and applied to teach instead at Düsseldorf Academy. After Adolf Hitler became chancellor of Germany in 1933, the academy was taken over by a Nazi official. There followed a series of episodes – Klee’s house was searched by Nazis and materials seized, he was labelled “degenerate”, and the Bauhaus closed.

Klee and Lily emigrated to Switzerland, but in 1935 Klee’s health declined rapidly as the result of an incurable degenerative disease. The following year he was well enough to return to work and to receive visits from Kandinsky, Emil Nolde and Picasso. “Productivity is accelerating in range and at a highly accelerated tempo,” he told his son Felix in 1939, and in February 1940 a major exhibition of 213 new works opened at the Kunsthaus in Zurich. German troops swept through Denmark, Norway, Luxembourg, the Netherlands, Belgium and France. On 14 June Paris fell; and two weeks later, on 29 June, Klee died. The late works have a depth and joy that almost escapes words, Blue Night (1937) being one of the highlights of the Tate Modern exhibition. 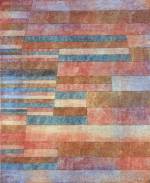 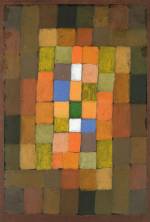 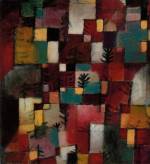 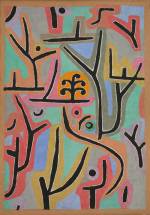