Liliane Lijn (b1939) gives Studio International a tour of some of her key works in her north London studio. Beginning with some early koans (imperial white rotating cones with slivers of colour slicing through them at angles) and a collection of Poemcons (cones with text carved into them, lit from within, similarly rotating), she progresses via fragmentations of the self (for example, My Body, My Self, 1996) and tales of singing to looming feminine creations (her Cosmic Dramas series from the 80s), to fragmentations of her Aerogel pieces, resulting from a residency with NASA in 2005. 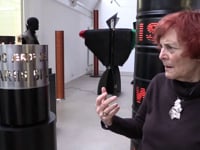