Drawing from two remarkable collections of contemporary art and medical and scientific discovery, this exhibition at The Hunterian shows how representations of anatomy, technology, spirituality and mortality have shifted through the ages 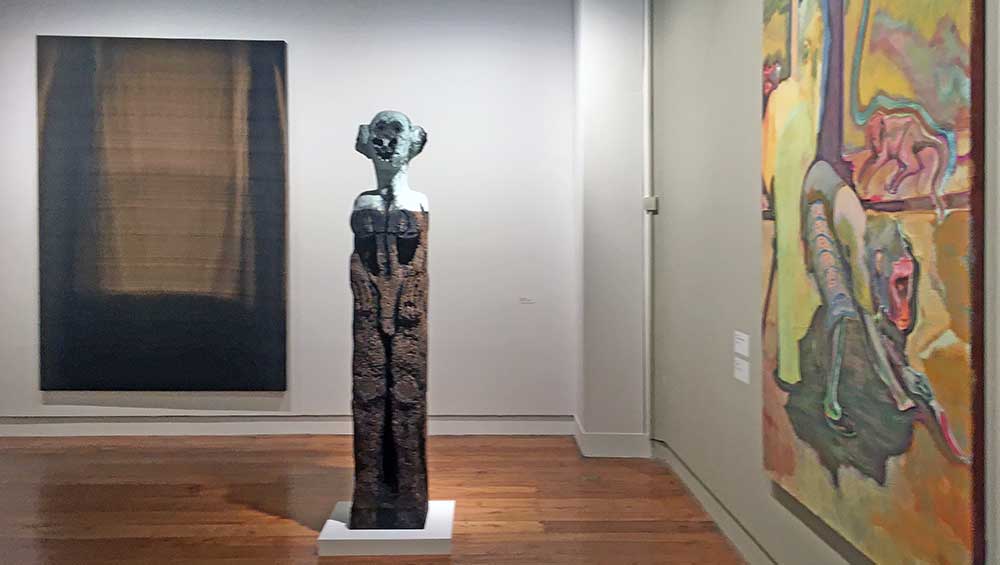 Glasgow’s Hunterian Museum is a superb venue for an exhibition showing that the human form is so much more than the labels and measurements, drawings and dissections that have defined it since the Enlightenment. It was established for the pioneering obstetrician and teacher Dr William Hunter (1718-83), who bequeathed his vast collection of medical, scientific and cultural artefacts to Glasgow University, on the proviso that it built a museum in which to house them – which it did in 1807. However, the Hunterian Art Gallery that hosts this new show, Flesh Arranges Itself Differently, is a very different, 20th-century concrete affair by the architect William Whitfield, set apart from the more classical museum incarnations elsewhere on the campus that house Hunter’s extensive library of books, drawings and body parts in jars.

Though body parts in jars are (sadly, for the more medically inclined) not part of this show, there are some stellar examples of the kind of dry, anatomical representations that you might expect from a world-class, historical medical archive. These are thrown into stimulating dialogue with works of contemporary art that are anything but reductive, and a long way from objective. At the entrance, for example, the dry, male, professional countenance of an anatomy teacher, pointing his teaching stick towards a partially disembowelled cadaver, is utterly eclipsed by the spectral beauty of Miriam Cahn’s paintings immediately to the left. 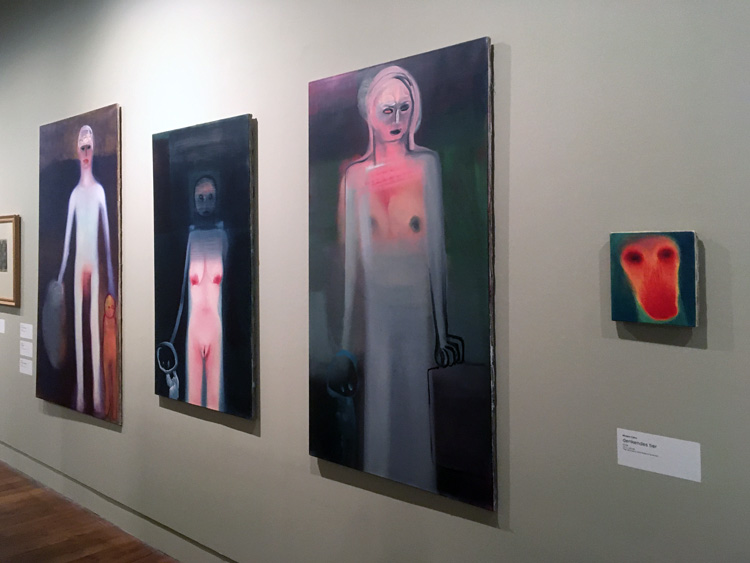 Cahn is passionate that her representations of women show their full, physical and personal power, to counteract the dehumanising, objectifying impacts of the dominant male gaze of the last two millennia. Her three painted figures loom into the room, arresting us with their powerful presence and their piercing stares – hollow- or gimlet-eyed. Their vaguely outlined bodies are almost iridescent with life, the only sharply detailed elements being the vivid pink of nipples or genitalia, or, by contrast, the hazing of pubic detail.

These paintings of Cahn’s are probably my favourites among the outstanding contemporary artworks drawn from the extensive collection of David and Indrė Roberts. The Roberts’ contributions make up half the show, but probably pack more than half the weight in terms of visual impact. The Hunterian pieces, however, add gravitas and valuable context. Few of their selected works do this more powerfully than Christine Borland’s SimWoman (2010). Its soundtrack - of breathing accompanied by a mechanised clacking - is audible as you enter the gallery, but not visible, not yet. 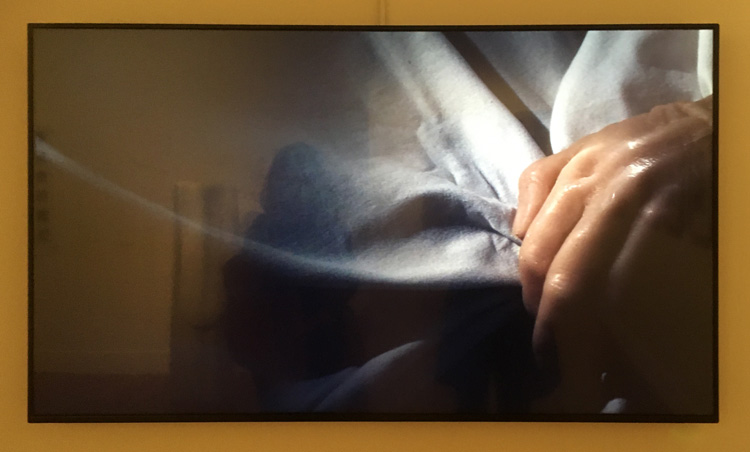 I like the fact that the work itself has been placed just behind the entrance, so that you probably won’t encounter the source of this haunting breathscape until halfway through the show; it adds to the uncanny impact of your first proper encounter. SimWoman is part of a trilogy Borland made using animatronic medical mannequins designed to assist medical students in making diagnoses. Having made SimMan (2007) and then SimBaby (2008), Borland wanted to follow up with a female version, but she was shocked to find that the manufacturers had not bothered to make one. So, she made her own, casting her own body parts in wax to lay over the male animatronic model. More affecting than the evident lifelessness of this supremely lifelike, glistening, waxy SimWoman is the slow, sensual camerawork as it lingers over each part and pore, creating a discomfiting atmosphere of intimacy.

From their original conversations in 2019, the co-curators, Dominic Paterson of the Hunterian and Ned McConnell for The Roberts Institute of Art, had plenty of time to delve deep into each other’s archives, physically and then virtually, and come up with a selection – especially given that the show was originally intended for 2020. The criteria for both curators seem to have been driven as much by the conversations that the works might provoke, aesthetically as well as intellectually, as by the visual impact of the works’ arrangement in the room. 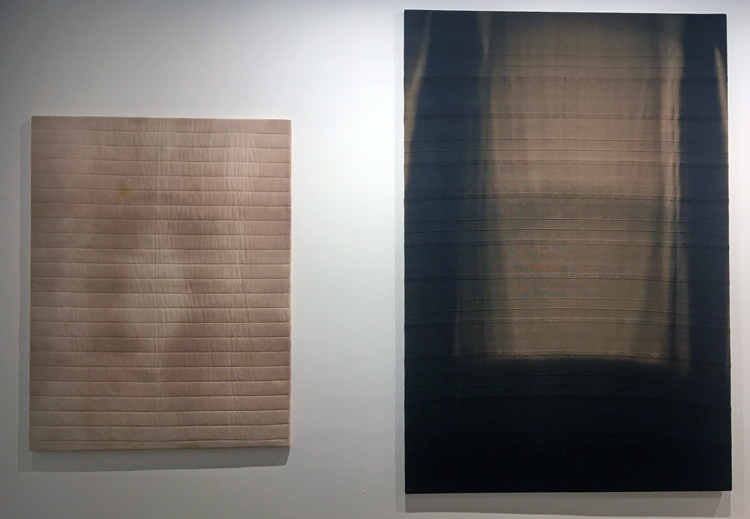 They have succeeded in creating a journey of enjoyable variety and richness of texture and emotion. Thematically, though, the connections can seem a little stretched. I love the four textile pieces by Ayan Farah from the David and Indrė Roberts Collection, but they say little to me of the body. Two large, blanket or quilt-style works on one end wall, stained with earth (one was buried) or homemade pigments, are hauntingly spare. They speak of domesticity and dirt and displacement, but not of the body itself. As for Farah’s two delicately coloured silk paper pieces - achieved by using UV light to leach out colour – they are more cosmic than corporeal; one of them is even called Stardust. But perhaps it is the visceral, physical response we have to them that justifies their presence here - our subjective, bodily experiences as important as our recognition of familiar body parts.

Farah’s two large pieces and one of the smaller silk textiles are, however, flanked by three works rooted in physicality: one is a totem-like sculpture with a burnt cork body and a hacked Styrofoam head, by Huma Bhabha (What is Love, 2013); another a confected creature of cloth and souvenirs, from Tamara Henderson’s own personal carnival (taken from her Seasons End installation that emerged from a residency at Hospitalfield, Arbroath, in 2015, but has since travelled the world). Bhabha is a famously nomadic artist, and her costumes become a kind of representation of each particular home, however fleeting. There is also a provocative work by Michael Armitage: ironically, the most “lifelike” of all the two-dimensional representations of bodies here, it is a splicing of man with monkey. 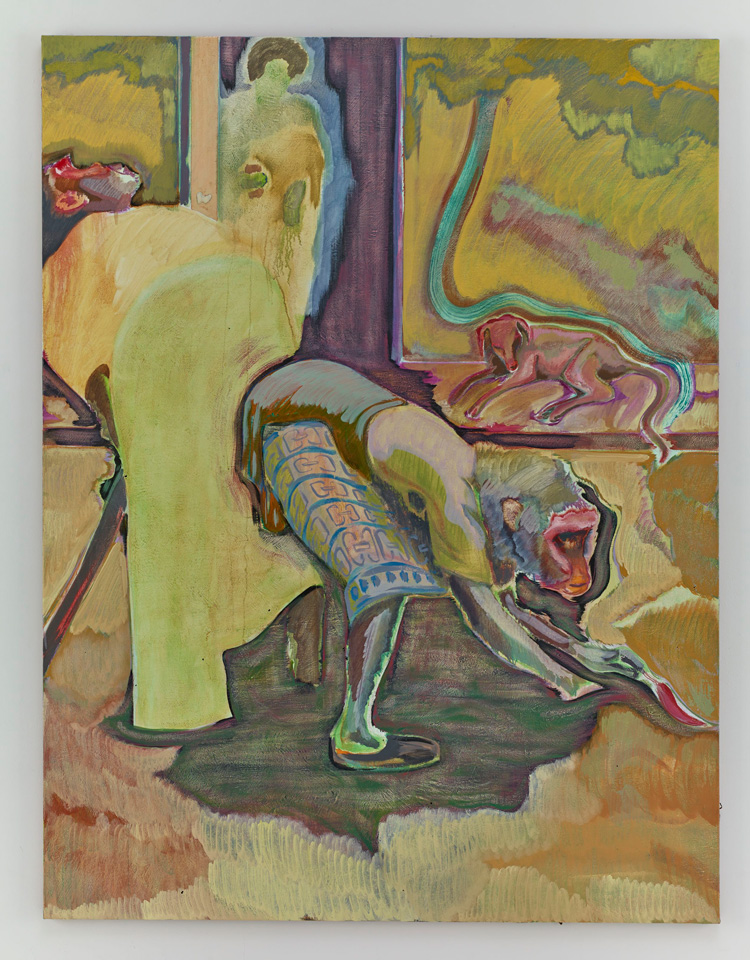 The painting Sun Wukong in Gachie (2015) is a commentary on the predatory investment and encroachment by China into Africa’s infrastructure over the last century. Sun Wukong, AKA the “Monkey King” is a mythical character who gains supernatural powers, taken from the 16th-century Chinese novel Journey to the West. 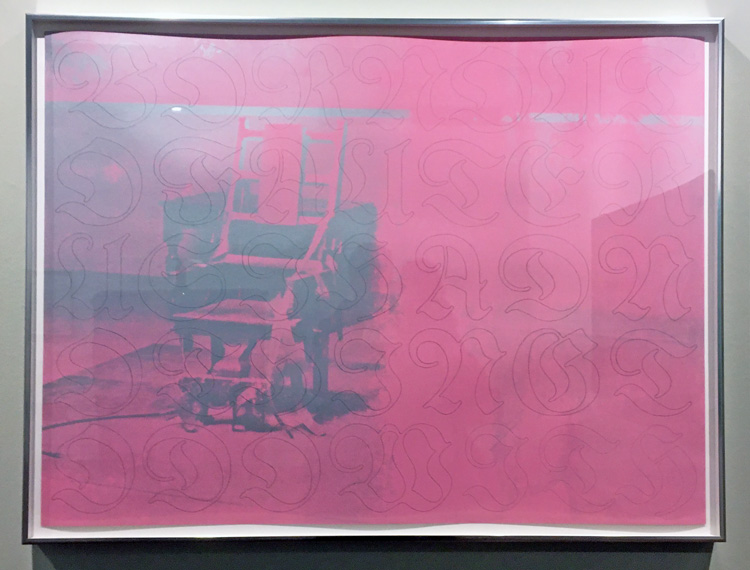 Beside this is a complete absence of body, as presented in Danh Vō’s Untitled (2014), which co-opts one of Andy Warhol’s Electric Chair print series, in tropical pink. Vō – who, aged four, fled South Vietnam by boat with his family following the fall of Saigon - scrawls across it in French gothic writing, “Born out of a uterus I had nothing to do with”, in a rejection of the US’s colonialising, capitalist, consumerist values. It reminds us that the fate of our bodies is not always within our control.

The call and response between the corporeal and the ephemeral is again brought into play with Rita Ackermann’s adjacent Burn Up in Heaven (2014), a large canvas drenched in green chalkboard paint, with ghostly, white outlines of figures faintly visible but barely legible through the green.

Rita Ackermann, Burn Up in Heaven, 2014. Courtesy the Roberts Institute of Art and the David and Indrė Roberts Collection. © Rita Ackermann.

In the far corner of this room, two lovely drawings by Ilana Halperin from the Hunterian collection are slightly eclipsed by these works but well worth the attention: they express her personal connection with volcanoes (as described in Studio’s interview with Halperin from 2021), first in a detailed drawing of debris taken from the Eldfell volcano that erupted in the same year as her birth, 1973, and then a shared timeline with this volcano, revealing more seismic shifts in her life story than that of the volcano’s, due to family losses, new-formed allegiances and geographic displacements. 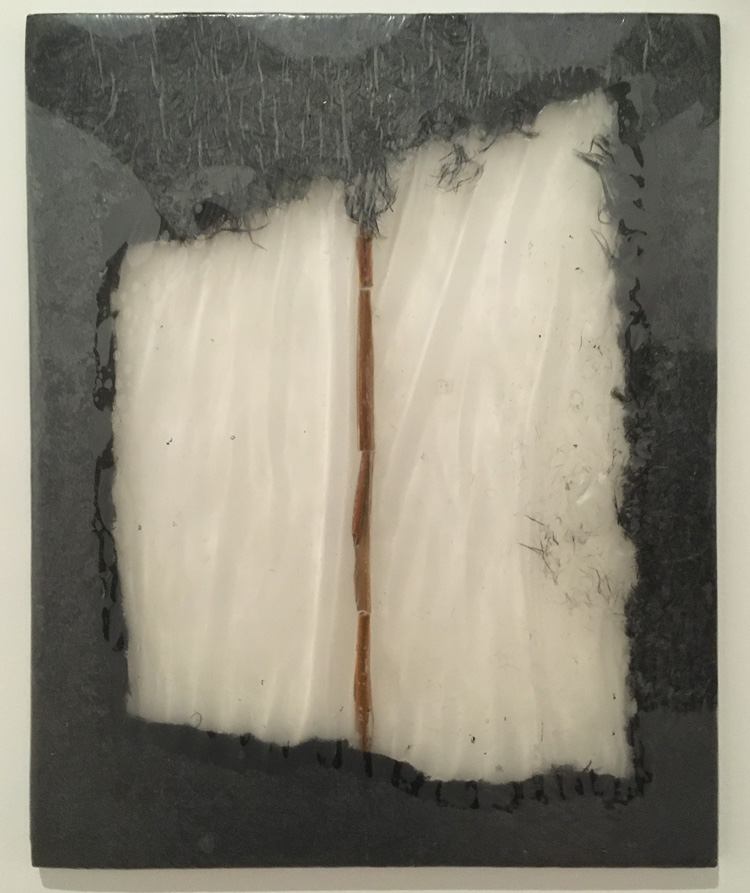 You could spend many happy hours – and it would be worth the effort - trying to tease out the associations between all these works. One pairing that does have an obvious, intuitive charm is Michael E Smith’s Untitled, 2013, a collage of elements sourced from his usual found detritus. Some translucent plastic sheeting is stretched across the frame; a ripped piece of polyester fur delineates its edges, while a vertical line of wrapped rhododendron leaves creates a fragile spine at its centre; it does have something of a creaturely cross-section about it, a quality reinforced by two adjacent early x-rays from the Hunterian collection, of a clavicle and the head of a femur, offering the ghostly echoes of bodies long deceased.

Eduardo Paolozzi, No Heroes Developed, 1970. © The Hunterian, University of Glasgow.

This last section of the show seems to be all about fragments and fragmentation – a very 20th- and 21st-century preoccupation. The breaking down of human bodies – as they were, brutally, destroyed during two world wars and also as human lives were then being broken down with the advance of mechanisation and now through technology – is reflected neatly in a series of prints from the Hunterian’s extensive Eduardo Paolozzi archive (he apparently bequeathed them a large amount of work, in gratitude for the commission to create the vast aluminium doors that flank the entrance to this gallery building). Dystopian images of robots being assembled by scientists (Watch out for Miracles … New Hope for Better Babies, 1970) or metal men staring glassily into the middle distance (No Heroes Developed, 1970), sit to the left of an earlier collaged piece where a scientist’s face is being absorbed and refracted by his own medical devices (A Veterinary Student, 1960). 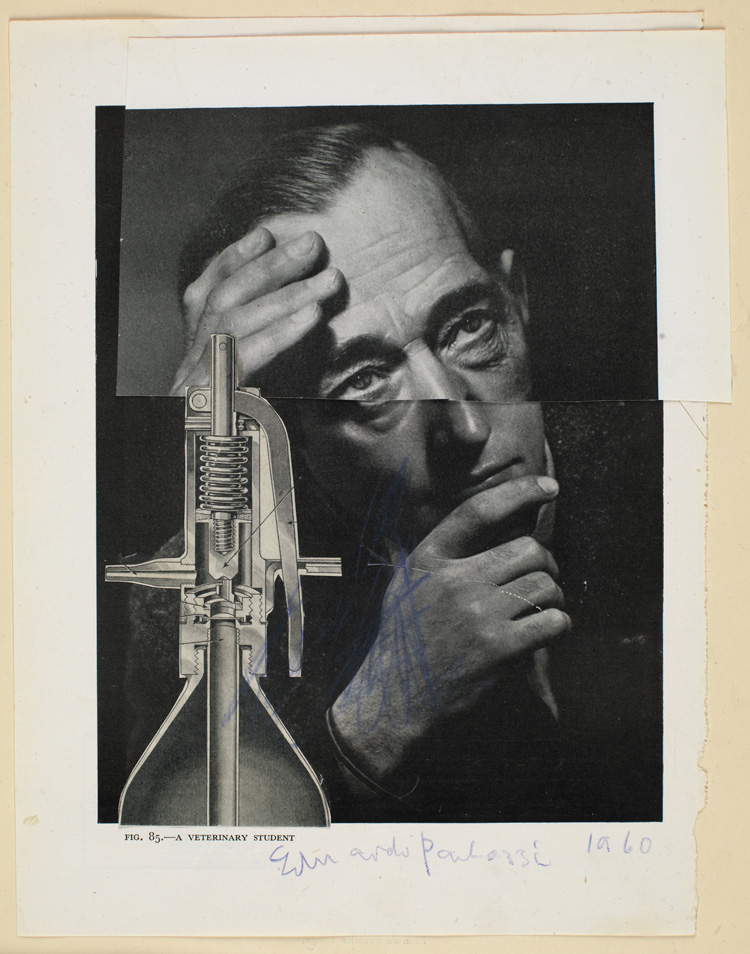 Eduardo Paolozzi, A Veterinary Student, 1960. © The Hunterian, University of Glasgow

Paterson admits that the Hunterian’s Robert Rauschenberg opposite is partly on show because he has been waiting for an opportunity to display it. Horsefeathers, Thirteen 1 (1972) juxtaposes a confusing jumble of images of animals and people with tools and clouds and data charts. It sits here to represent the breaking down of barriers, further explored by Liliane Lijn, whose kinetic work Cosmic Flares III (1965-66) flickers in its own little cubicle around the corner, the small, analogue lightbulbs casting curved shadows and contours on to the tiny, polymer lens-strewn Perspex. She said she wanted to break down barriers between material and immaterial forms, seeing the world “in terms of light and energy”. It’s a good moment to introduce a work by Yayoi Kusama, another artist whose representations are as much to do with cosmic energies as corporeal experiences, and her Dots Obsession of 2016 presents a kind of negative counterpart to Lijn’s, with its black circles glowing against a silvery background. 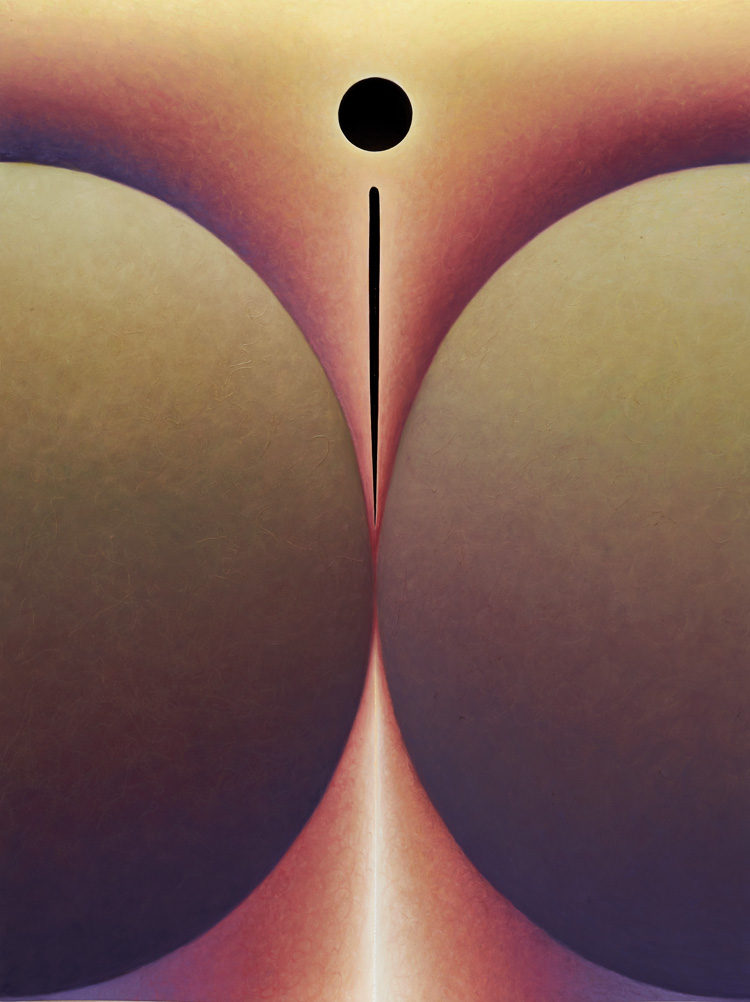 Though the final work is an elegant illustration of the nerves, from an early anatomical teaching poster, for me the show’s flamboyant full stop comes with two cheeky (literally) works from Loie Hollowell. Apparently inspired by her experiences of giving birth, Squeezed Cheeks (2019) and Boob Wheel in Blue and Yellow (2020) pretty much do “what it says on the tin”. However, part sculpture, part painting, they lurk somewhere along the line between abstract, geometric arrangement and physical manifestation, in a way that is both humorous and celebratory of the female form – and that freedom and diversity of spirit and self-expression in the selected female artists’ work is something to relish. 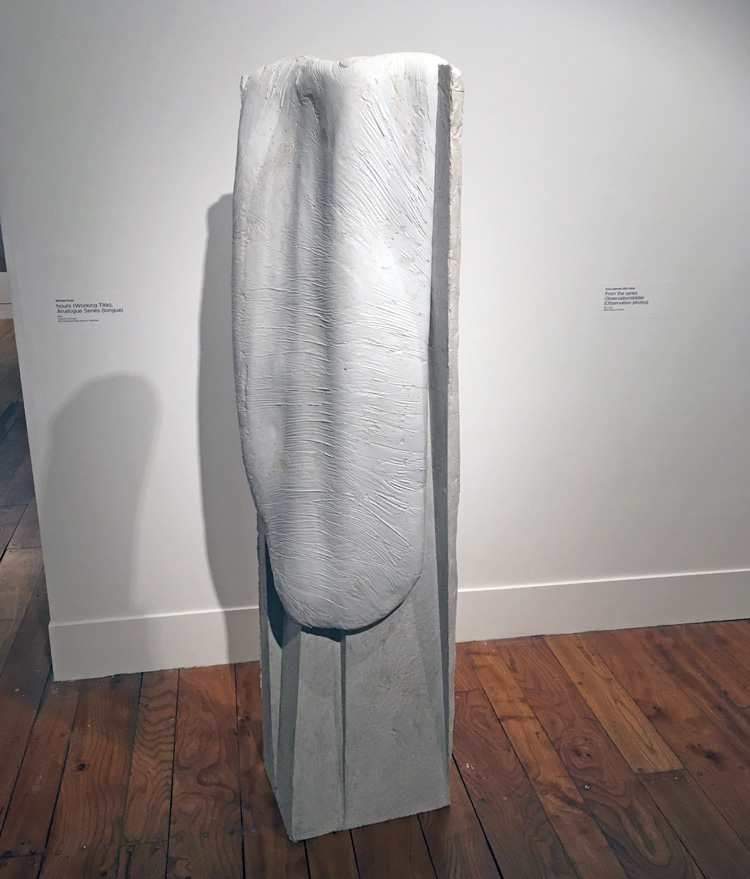 But the presence of humour is also welcome here, as it is in the giant, white tongue that lolls, almost drooling down its pedestal in Michael Dean’s Hours (Working Title), Analogue Series (Tongue) 2013. As medical students everywhere soon learn, the job of working with human bodies in states of distress can be tolerated only with regular doses of levity.

Flesh Arranges Itself Differently – the title taken from The Handmaid’s Tale – packs a lot into its relatively modest space and does an excellent job of demonstrating the rich multitude of ways in which the human body and spirit can be represented, as well as the cultural shifts that have opened up these explorations since the age of Enlightenment. Current experience tells us that these shifts will continue to disrupt our sense of our physical and collective selves and our identities in ways we can only imagine. 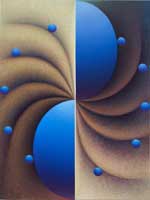 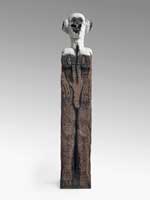