Larry Bell: ‘You have to trust what you’re doing, to trust the work’

Larry Bell: ‘You have to trust what you’re doing, to trust the work’

The artist discusses his latest solo exhibition, at the White Cube gallery, the spontaneity that occurs during the making process, why he chose to stop painting, and going to tea with Marcel Duchamp

Having been associated with the California Light and Space movement in the 1960s, Larry Bell, who was born in Chicago in 1939, has made exploring the relationship between the art object and its environment his primary concern for more than 40 years. Initially a painter, Bell began by painting angular geometric compositions that suggested three-dimensional forms. Frustrated by the two-dimensional limitations of the medium, he then made the switch to sculpture.

Using techniques such as “thin film deposition” – an industrial plating process – Bell manipulates surfaces such as glass and paper in order to change how we perceive our visual – and often physical – relationship to the object. As he has got older, he has constantly sought to reassess the way in which he creates his work. Like Matisse with the paper cut-outs, Bell has moved away from the physically demanding scale he was known for – such as Standing Walls – in favour of more manageable mediums such as collage. Although age may have put a halt to scale, his productivity has remained as intense as ever; perfectly demonstrated by his recent work 3D VD (2014).

He studied at the Chouinard Art Institute in Los Angeles under the tutelage of important figures such as Robert Irwin and Richards Ruben, and has exhibited in group shows at Tate Britain (1970) and the Hayward Gallery (1971), as well as having solo exhibitions at the Museum of Contemporary Art in Los Angeles (1986) and the Chinati Foundation, Marfa, Texas (2014).  On a side note, Bell was also featured on the cover of the Beatles’ album Sgt Pepper’s Lonely Hearts Club Band created by artist Peter Blake.

Alexander Glover: Let’s talk about the more recent work – 3D VD – featured in this show. How is the process behind these works different from, say, your glass works?

Larry Bell: There’s less fuss about the preparation with 3D VD. For these works, I applied the same vacuum-coating process I use with glass, but on a much smaller scale. All I do is twist and cut the paper into the shape I want and add pieces of treated Mylar laminate on top. The whole thing had to do with making it easier. I learned a lot about the technique from the discipline needed to get stuff to stick to a piece of glass. There were big amounts of equipment just to handle the glass. With my more recent work, I don’t require any help and it can be done by hand.  I could just do it and that meant that the process was a lot faster.

AG: You started using Inconel [a nickel-chromium-based alloy] in your work some years ago. Could you describe what it does in relation to your process?

LB: I discovered Inconel a few years ago and I only use it on glass. On Mylar, I don’t have to handle the material before or after I’ve coated it. I make some incisions on the surface that allow me to twist the stuff into a shape that I couldn’t have got it into if I hadn’t made those incisions. Then I put the metal films on – in the case of the Mylar pieces, it’s aluminium – to brighten the surface. On top of that goes the quartz-like material. It’s all very spontaneously done.

AG: How do you know when the work is ready or finished?

LB: I watch, I just watch the process.

LB: Well, I mean happy is just being able to do it in the first place. I really enjoy what I do and I have a really good time with it. What I’ve run out of is good time. I’ve got too old to lift the stuff, and half the fun of the big stuff was carrying it around. That’s a young man’s game. I’m 75 now; I can’t lift that stuff any more. So I went to do something that I could do with the same equipment and the same procedures but it was manageable for me. I didn’t want to hire a bunch of gorillas to do that stuff. They don’t deserve that pleasure!

AG: When you were starting out, you worked at a picture-framer – where you first started to experiment with glass. In hindsight, would you say that this place was a more formative experience for you than art school?

LB: The thing that was most powerful for me, and it was while at art school, were the teachers who told me that I had to trust what I was doing. You have to trust what you’re doing, to trust the work.

AG: Was one of those teachers Robert Irwin?

LB: Yeah, it sure was. He told me to just trust myself, whatever it is you’re doing. It will then go wherever you trust it to go.

AG: Because there’s a lot of spontaneity in the process, how much do you dictate the work and how much does the work dictate you?

LB: The work doesn’t really decide anything. I follow the nature of the work. The work is the teacher, but it’s at my command. I’m responsible for all that is left behind. I don’t necessarily know that the stuff is art.  But it is definitely evidence of what I was doing. I’ll leave it to others to decide if it is art.

AG: You’ve also been known to work with collage quite a lot. How did this begin for you?

LB: I guess it started when I was absolutely broke and the only way I could be un-broke was to do a big project. I didn’t have money to do a big project. So I went into the studio and looked around. I had a vast amount of work that I wasn’t selling – two-dimensional works. So I just cut them up and made collages out of them.

AG: You described these collages as “imitation painting”. Can you explain what you meant by that?

LB: Well some of the elements I was using for that original work were laminates of film that had paint on them. I had made paint gestures: brush strokes, drips and stuff like that. I would let them dry and then laminate a film on top of it so that the paint gesture was enveloped in a transparent film that would liquefy with heat. But only the film would liquefy, not the paint. That would allow me to cut a brushstroke out of the stuff and merge that with a piece of paper, and so on. Then that next to some Mylar, which reflects light in a different way, and then you would have the finished piece. This paint gesture was then placed where I wanted it. You could never spontaneously make a paint gesture that precise. So I made gestures spontaneously, and then judiciously placed it as a dry element. The ones that had paint on them were therefore imitation painting.

AG: Did you start off as a painter?

LB: Yeah, I did, but I was by no means an expressive painter. I did some oil paints originally, but then I went on to acrylics. The imagery became very organised and I found myself painting illusions of volumes. I then started making the canvases with suggestions of volumes, too. The paint then started to suggest a volume that was within a volume. Then I asked myself: why am I making these paintings of volumes? Why don’t I just actually make the volumes? All of a sudden I became a sculptor. It wasn’t a decision to become a sculptor, though. There were endless ways of painting the illusion of the volume. I was in too much of a hurry than to paint for 20 years before I got to a certain point. I wanted to do it fast. I then dropped the whole idea of painting and since the work I was doing previously suggested volumes, I just went on to making them.

AG: Were there others around you at the time that had these sorts of ideas and views? Irwin for example?

LB: Well he was on a different search to me. He wanted to work himself out of painting by minimising the visual until there was nothing left to do. I’m different – I always want something to do. When he started making objects, he himself didn’t make them. He hired a great guy called Jack Brogan to make them for him. I like doing it myself.

AG: Was Marcel Duchamp’s work with glass an inspiration to you?

LB: I met him! He came to my studio with Bill Copley and Richard Hamilton.

LB:  Yeah, I didn’t know who it was at first. I was 22 years old or so when they came by. I suffer from something called hereditary nerve degeneration and was told that I was born with a 40% loss across the spectrum in both ears. But my hearing loss was not diagnosed until I was 46, so I couldn’t really hear too well. When I was introduced to Duchamp I couldn’t quite make out who he was at first. But when I eventually realised, I was catatonic. He was a really nice guy. When I did my first show, he invited me to his house for tea. There were beautiful Giorgio de Chirico paintings on the wall. It was amazing to be surround by his cronies.

AG: What did you talk about?

LB: I asked him if he was still working and he said: “Yes, I’m preparing a show right now of earlier work.” I then asked when he had done them? To which he replied: “Oh, when I was six or seven …” 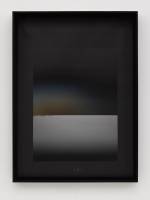 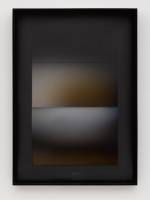 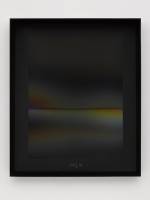