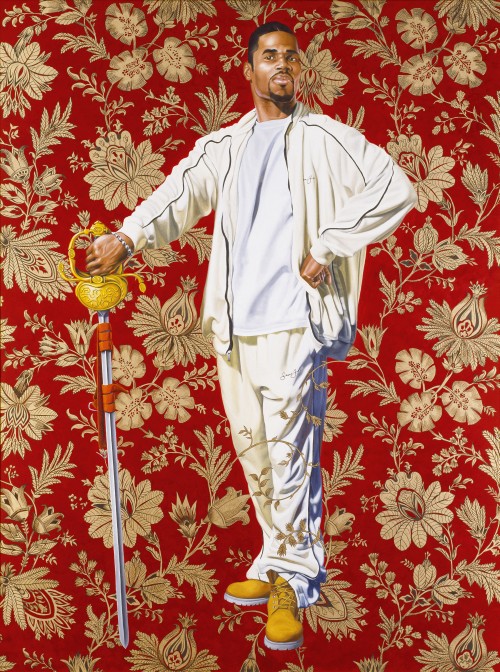 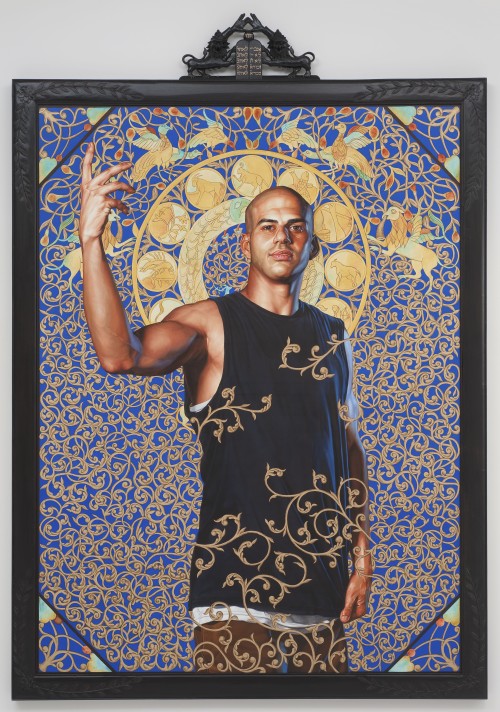 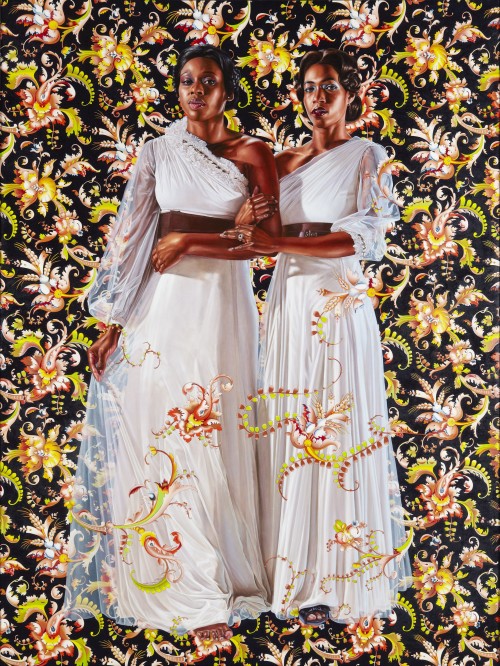 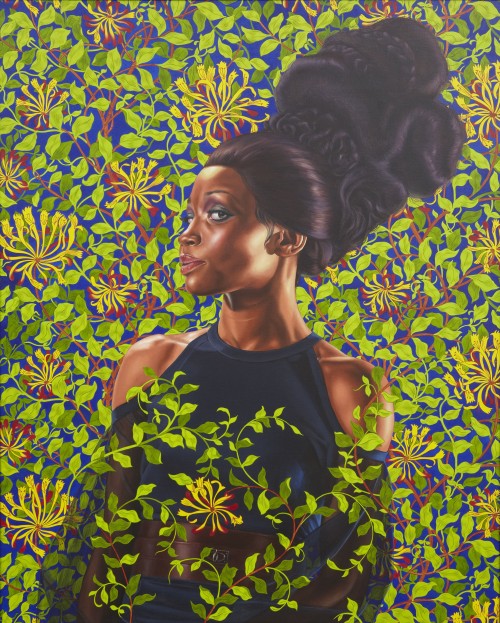 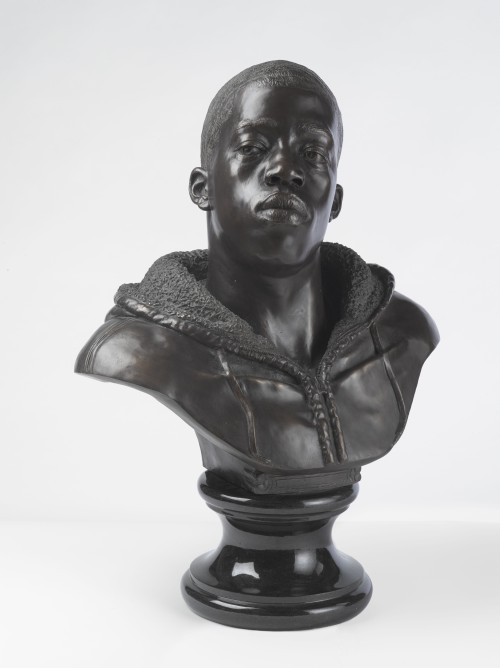 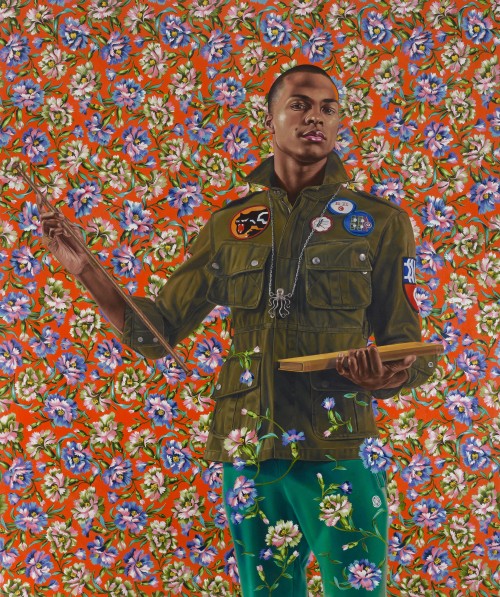 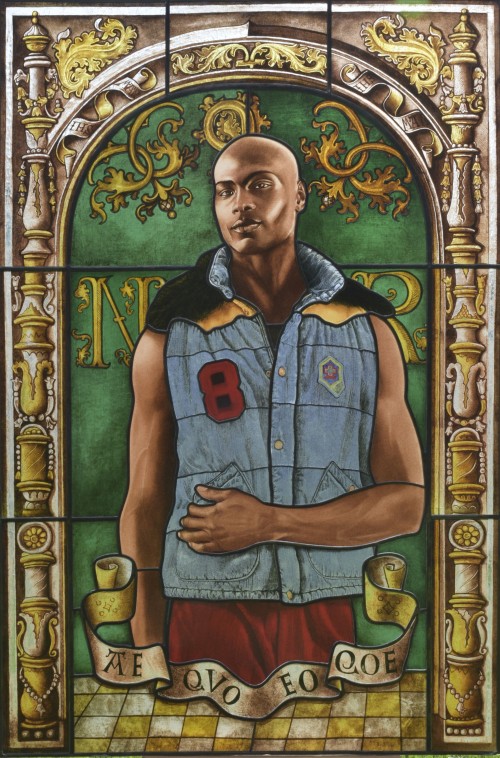 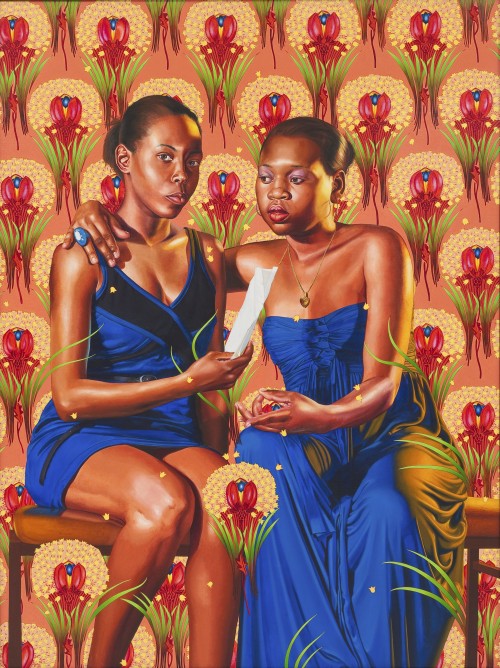 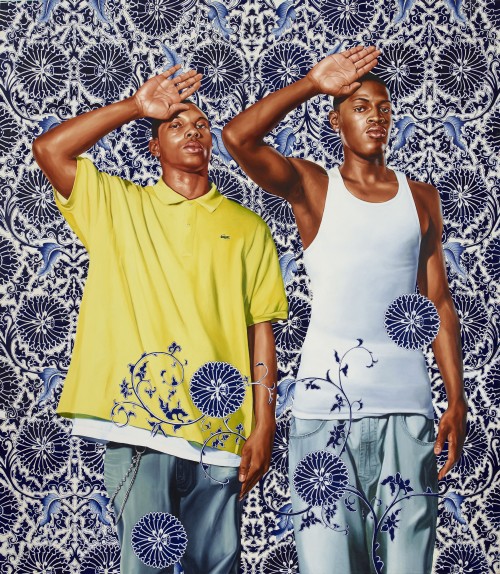 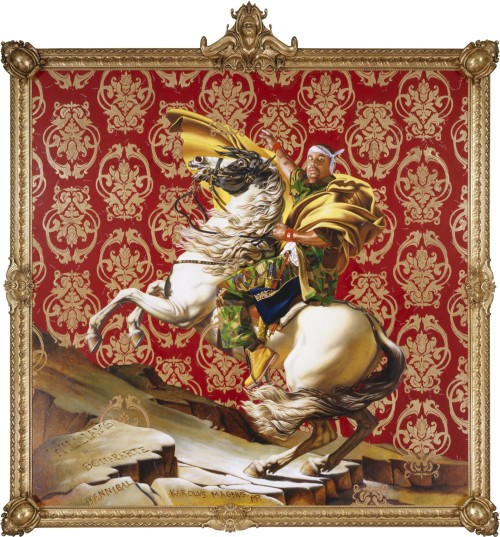 Kehinde Wiley: ‘I think ideas are just as important as the material practice of painting’

Kehinde Wiley’s art is not about politics: it is politics. One could say that the artist, who was born in 1977 in Los Angeles, adopted exclusion as his modus operandi: he paints only black people, only portraits, only in poses and with expressions borrowed from canonical examples of western painting tradition, which precedes the 20th-century avant gardes. Until 2012, he painted men only. Despite some deviations from this strict representational system – such as the inclusion of sculpture, a video and a room dedicated to portraits of women – Wiley’s new exhibition at the Brooklyn Museum, which presents an overview of his career since 2001, reinforces the message of exclusion. It does so most forcefully by literalising the meaning of the word “canon” by turning it towards religion and dogma: the exhibition begins in a chapel-like space with portraits of black men as saints presented as venerated icons and imposing stained-glass windows, and ends with their portrayal as strikingly beautiful youths in pious poses painted after Hans Memling’s prototypes of middle-class burghers. Conservatism of Wiley’s representational system brings him straight to preaching, leaving the modernist concerns with materials or postmodernist doubts, fear and uncertainty behind.

Wiley shows us black people as beautiful, sexy, powerful and abundant. His models always return our gaze, looking back at us with authority and benevolence if endowed with power, frustration and exhaustion if undergoing persecution, or with the kind of attitude that is both seductive and conscious of its own desire if displayed in sexually provocative poses. There is nothing wrong with the content of his message as far as the black community is concerned, because black people have been historically downtrodden in this country, and because Wiley’s art serves the purpose of uplifting their spirits by giving them an image of themselves to which they may aspire. It appears, however, that the simple reversal of the terms of the unequal and degrading race relationship does not address the underlying problem of how to begin breaking the barriers of mistrust and exclusion. In connection with the exhibition, the artist has agreed to speak to Studio International. The interview took place before this critic had a chance to see the exhibition, so the questions do not address its content closely.

Natasha Kurchanova: Thank you for taking time for this interview. Much of your art seems to be about identity taken broadly: you appear to be using the social status of traditional portraiture, its glamour, to represent subaltern identities – that of black, in a couple of instances Indian, black Israeli. Moreover, for most of your career, you have been concerned with portraying men. So, it seems as if your style of painting is part of you. How did your personal history play a part in finding your style?

Kehinde Wiley: It’s a good question. You mentioned that identity undergirds my art. I think that many artists of colour, be they from America or elsewhere, as young participants in an art community, oftentimes experience pressure to create works that respond directly to the notion of identity. It can be seen as either an advantage, or, on the contrary, as an aesthetic prison of sorts. In my work, I start from a very personal viewpoint and ask much broader, sweeping, internationalist questions. I begin with the notion of America – certainly, America’s relationship with race, class and gender – and quickly realise that these questions are not specific to my country, but are relevant all over the world. The way I deal with the global integration of these issues and concerns has to do with the way American culture is being spread to the rest of the world – people in Mumbai and on the streets of Beijing become an entryway leading us to talk about a variety of the world’s identities.

NK: How do you choose your models? Are they absolutely random, or do you know them personally?

KW: There are a lot of different strategies. Most of the interviews I have given talk a lot about finding models on the street – what I call “street casting”. That’s when I stop complete strangers who are minding their own business, trying to get to the train. That’s generally how it goes for about 80 per cent of my work. But there have been other instances: whether my sitters were very interesting people, such as artists, entertainers, or friends. Sometimes I place ads on the internet. Ultimately, it’s me looking for a certain type of an individual. A lot of it is based on attractiveness.

NK: Do the models choose a particular art-historical prototype according to which their portrait should be moulded, or do you?

KW: It’s a little bit of both. Because I am the person with an interest in art history, I begin by showing books and prototypes to a prospective model. So, people who are invited to the studio then have to look through all the resources available to them. Then they make the decision about which prototype to use, according to their state of mind, character and other factors. It’s a collaborative process. There are moments, though, when I have very specific ideas in mind, and then they do not have a choice.

NK: How long does it take you to paint a portrait, usually?
KW: That’s a tough question, because if you’ve seen some of my work, it is incredibly intricate, with lots of small details. Some paintings are very large and epic. Some of them are simpler, smaller studies, which are powerful in their own right. Each of these types has its own completion time. Frequently, I work on projects for which I have to travel to places such as [the Democratic Republic of the] Congo or Cameroon, and that body of work is usually circumscribed by the period of my travel. Generally speaking, on average, it takes me about six months to complete a work.

NK: Could you tell me about the importance of ornament as a background in your paintings? It seems as if, at times, it encroaches on and overwhelms the actual figure – it is almost as powerful as the facial representation. How did you come about using ornamental background for your portraits?

KW: The question arose for me very early on when I was looking at the hierarchy that existed between the elements of craft, as we call it, and the beaux arts tradition. All these traditions become secondary to the larger project of western easel painting. I am speaking about oil on canvas, although other materials can be used. The division within the respective modes of work divided the art community as well along the lines of “serious” versus “decorative” art. Decorative arts have always been relegated to the sidelines, as were black and brown people who were populating these works. At the end, what has been marginalised comes to occupy the very centre of the painting, its material practice. Also, in much of the history of western art, anything decorative was considered women’s work. My painting at once criticises and embraces this tradition.

NK: Your portraits are performative – their subjects always address the viewer from the position of power and authority, looking him straight in the eye as if challenging his own place in this life. Despite this performative quality, the critics dubbed your style “conceptual realism”, which seems a misnomer to me, because it does not mention performance. Is the concept or performance the guiding force in your art, or do they have to be mutually exclusive?

KW: I think that ideas are just as important as the material practice of painting. If you look at my paintings in an exhibition space, and if you see a 2D object on a wall, you get only part of the story. The actual underpainting of the work has to do with who we are; why these people and this place are depicted in a particular configuration. All these questions have at their root a conceptual germ. I do not think there is anything wrong in embracing this aspect of painting along with the material one. Painting is a very time-consuming, careful practice of trying to figure out how to best tell a story, which is part of its conceptual nature.

NK: Could you say a few words about your World Stage project? It was a widely international venture; how did it come about?

KW: I started making paintings that were being shown internationally, and having an opportunity to travel broadly allowed me to see American culture in sharp relief. I realised very quickly that there are young people all over the world who are America’s cultural outpost, and that, at the leading edge of that outpost, are black America’s cultural products, such as hip-hop, for example. Hip-hop is the cultural temperature of the 21st century for many young people now. I thought I would start from a very American place – self-obsessed and self-referential – but, very quickly, it becomes a question about looking out rather than looking in. Those places I visit and depict are of interest to America. Why is Israel featured within that series? How does Africa and China figure within this future of a broader economic policy? These are questions that are centred on the interests of America. One may ask a question of why such a focus on America, but in the end, hip-hop addresses larger issues of popular culture.

NK: What are your most important influences and, in particular, which artists influenced you most?

NK: Let’s start with dead and follow up with the living.

KW: I like Venetian painting a lot: looking at Giovanni Battista Tiepolo is one of my favourite things to do. When I went to my first Venice Biennale, I was blown away when I saw the works of these artists on the ceilings. The technical proficiency impressed me. I was also attracted by the chiaroscuro aspect of Caravaggio’s painting: the subtle eroticism that he brings into the picture plays with the viewer’s mind. The baroque art of that time is decidedly sacred. One of the aspects of this art was sexuality, the charged erotic space. I also love Van Dyke’s paintings. Generally speaking, I love physically beautiful paintings. You see aspects of this painting in the 18th- and 19th-century society portraits that influence me today. One of my favourite masters is John Singer Sargent. He impressed me with his graceful, dignified subjects from the time I was 11 years old.

NK: And what about living artists?

KW: A lot of them are my friends. I am lucky to be living in such a dynamic place as New York City, where I can easily have someone like Wangechi Mutu give me advice on painting. I am in love with painting by Kerry James Marshall; I love the conjectural conceits of someone like Lorna Simpson, Glenn Ligon ... It’s a great time to be a working artist in New York City.

NK: Could you tell me a little about your exhibition at the Brooklyn Museum.

KW: For the first time, you will see 14 years of my painting. During this period, I created distinctly different bodies of work. You will see a lot of work that was inspired by the second world war. It is equestrian portraiture and is called Rumors of War. The exhibition will also have the earlier work – from late college and my first few years in New York – that establishes an early trajectory for the performative aspect of my painting. There will be a video installation, as well as work that has never been shown before. For example, pieces of stained glass will be installed for the first time, as well as large-scale bronze sculpture. In addition to that, the exhibition will have some of my small, intimate paintings inspired by religion. Also, some newer investigations will be included which concern women, femininity and fashion.

NK: Thanks again for your time, Kehinde, and for this interview.