Wiley’s first foray into film depicts a scene of young black men in the sea, struggling to reach land. It is a poignant meditation on migration, exclusion and social dislocation, yet it is not without hope

Levinsky Gallery, University of Plymouth
29 September 2020 – 24 January 2021 (Due to the UK government's guidance regarding Covid-19, The Levinsky Gallery is closed until 2 December 2020.)

Kehinde Wiley is well known for his vividly patterned portraits that subvert historical depictions of power, taste and privilege. Working in a hyperreal style, the Nigerian-American painter collides old master painting and rococo excess with a hip-hop sensibility to challenge the marginalisation of people of colour in the western artistic canon. His portraits, which switch the wealthy white Europeans of art history for contemporary black figures plucked from the streets, have won worldwide acclaim; in 2017, he was invited to paint the official portrait of the former US president Barack Obama for the Smithsonian National Portrait Gallery. This exhibition at Plymouth’s Levinsky Gallery, however, provides an opportunity to experience another side of Wiley’s practice: his first foray into film. 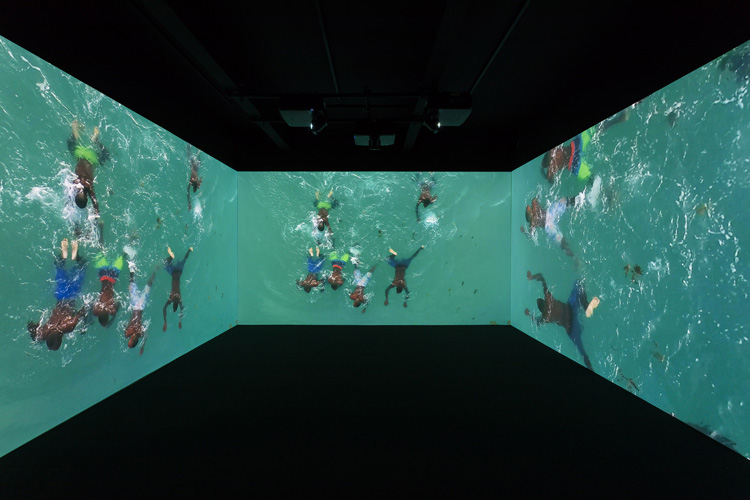 Narrenschiff (2017) is an immersive three-channel projection that takes Sebastian Brant’s illustrated satire The Ship of Fools (1494) as its starting point. Brant’s book – one of the most important works of 15th-century German literature – introduces readers to 109 fools, each with different shortcomings, who travel together on a ship. His crew of fools lampoons politicians, clerics and others in society with an irreverent wit. Wiley’s 16-minute film, however, shows no trace of satire. A group of black men are shown swimming in the ocean, struggling to reach land. One scene features closeup headshots of individual figures bobbing in the water; another takes an overhead view, following the men as they glide together through the lush aquamarine sea. The group eventually reach dry land as waves break on the sandy shore. 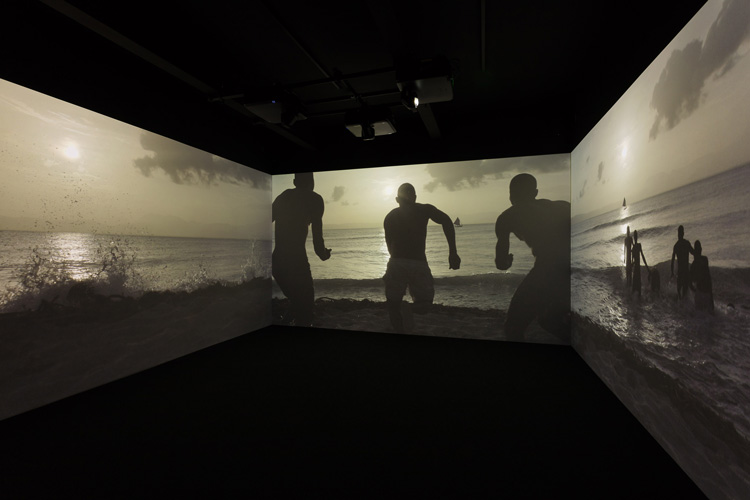 On one level, Narrenschiff is an elegant study of black bodies in water. Wiley’s camera lingers on physiques and faces, and becomes captivated by light shimmering on the water. Images are repeated across the three screens, emphasising the subjects’ formal qualities. But these beautifully shot scenes are accompanied by sobering extracts from Frantz Fanon’s influential anti-colonial text The Wretched of the Earth (1963) and Michel Foucault’s seminal study Madness and Civilization (1964). Read by the actor CCH Pounder, the texts touch on colonial prejudice, mental health and the marginalisation of those who do not fit societal norms. Yet Wiley avoids any overt didacticism; his themes wash in and out like the on-screen waves, mixing with Maxim Budnick’s haunting score for piano and cello to create a poignant meditation on historical and contemporary histories of migration, exclusion and social dislocation. 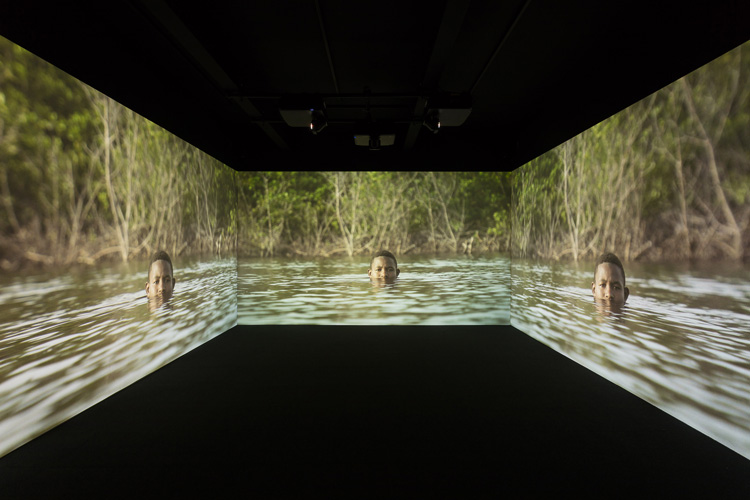 A copy of Brant’s richly illustrated book – which was itself inspired by the allegorical ship and dysfunctional crew described by Plato in his Republic – is displayed in the dimly lit gallery. Whereas Plato intended to critique the notion of democracy, Brant ostensibly wanted to cultivate wisdom and reason in his readers. For Wiley, however, Brant’s tale is rooted in reality. As the gallery wall text boldly declares: “The Ship of Fools is not an imaginary story. In 13th-century western Europe, large numbers of people, who were labelled as outsiders, were made to set sail and forced into isolation and sometimes, as a consequence, sanatoriums.” This assertion derives from Foucault’s statement in Madness and Civilization that there was indeed a real-world counterpart to Brant’s Narrenschiff. But while there are historical examples of mad people travelling in boats along European rivers during the middle ages – whether expelled by towns or simply journeying to religious shrines in search of healing – there is scant evidence to suggest that the mentally ill were rounded up wholesale, placed in ships and delivered to sanatoria.1 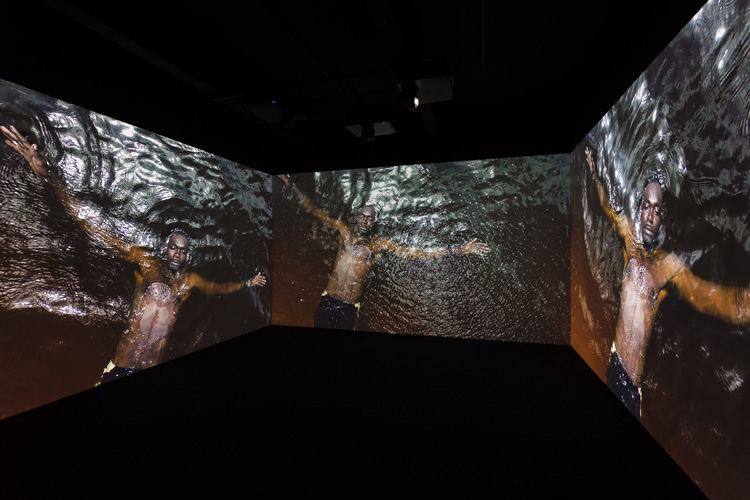 While Foucault’s book is foundational in the study of otherness, the ship of fools remains a literary and artistic trope. The prejudice it reveals, however, is very much still in evidence and Wiley reinforces its relevance to considerations of colonialist legacies as well as contemporary issues surrounding migration in Europe and the US. The small boats and crews that navigate the waters of Narrenschiff appear small and fragile against the ocean, a vast body of water that, as the voiceover states, “carries off, but also purifies”. The sea can be understood here as a metaphor for physical and mental separation, but also as a conduit for new beginnings. Indeed, Narrenschiffis tinged with hope. The setting sun casting its glow over the water reminds us that the end of one day ushers in the dawn of another – as Wiley’s figures reach dry land, there is the possibility of a new start.

Also on display is the 2017 painting Ship of Fools, a reimagining of Hieronymus Bosch’s mysterious painting of the same name (c1490-1500) in which a strange group of people appear adrift in a boat with a leafy tree for a mast. Wiley’s version shows a smaller group of black figures adrift on a stormy sea. The mast of their battered boat is similarly replaced by a large tree and we are reminded of the perilous sea crossings made by migrants and refugees the world over. But these travellers seem relaxed and unperturbed by their situation. Two women in the foreground laugh and joke as a young boy stands on the stern, staring fearlessly at the swelling waves; a man, standing oar in hand, looks more as if he is posing for an aspirational clothing brand than navigating dangerous waters. Strength in the face of adversity may be the subtext, but Wiley’s photographically derived figures appear contrived. As with many of his paintings, they are rendered in a fastidious, tightly controlled manner, lacking the depth and sensitivity found in the work of masters such as Bosch.

Wiley’s controlled paint handling is contrasted sharply by the fluidity and movement of Narrenschiff – a triumphant experiment in moving image that expands the artist’s practice, transporting it into new, refreshing territory. There is no doubting Wiley’s proficiency as a portrait painter, although, as this exhibition demonstrates, his skills are not limited to brushes and canvas. Narrenschiffmay be the first time the artist has dipped his toes into the world of film-making, but it should not be his last. 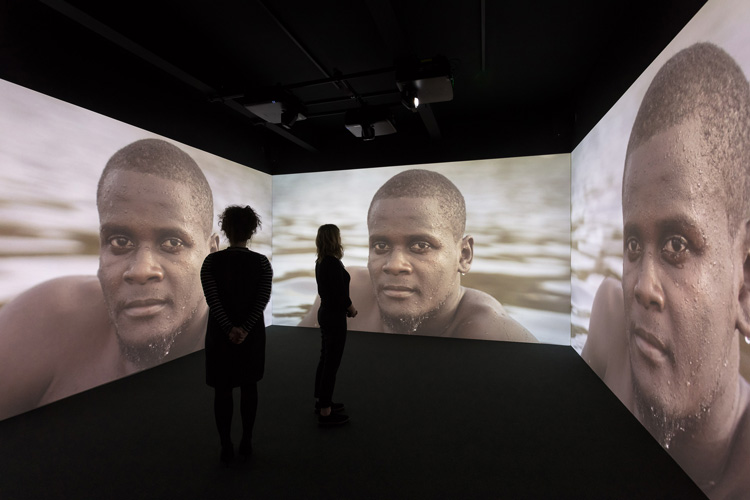 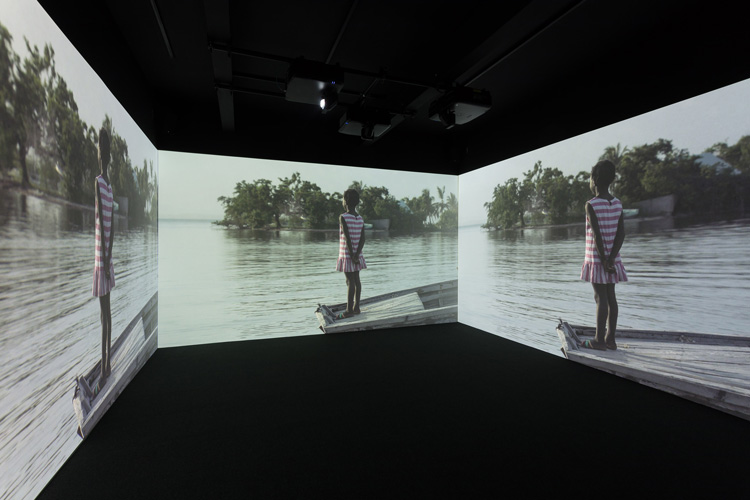 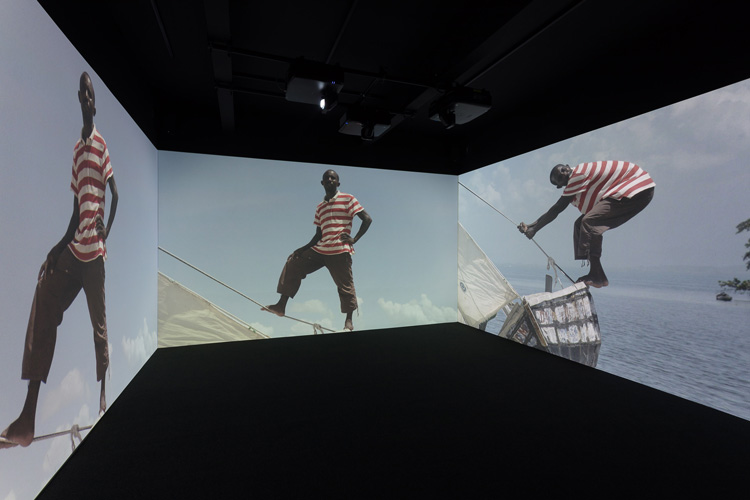 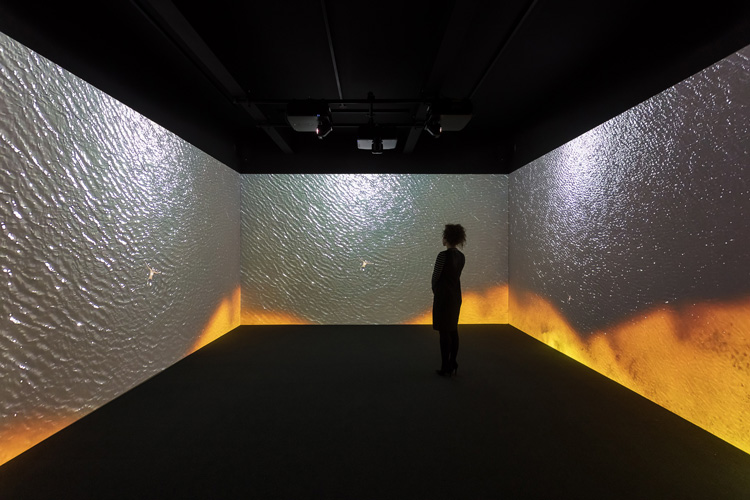 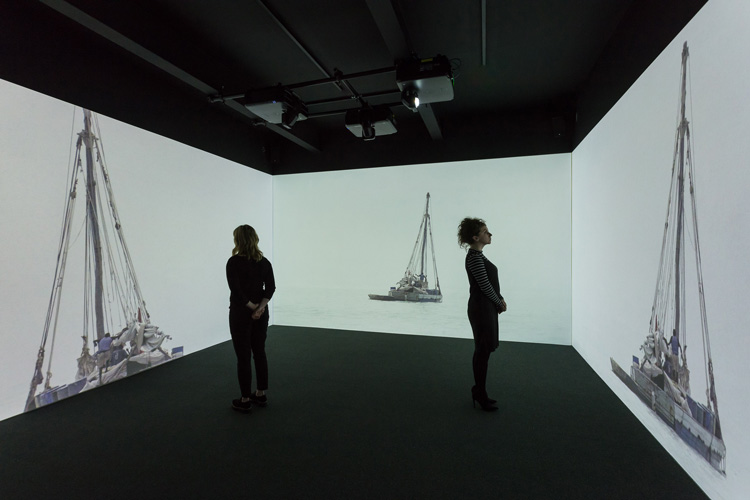 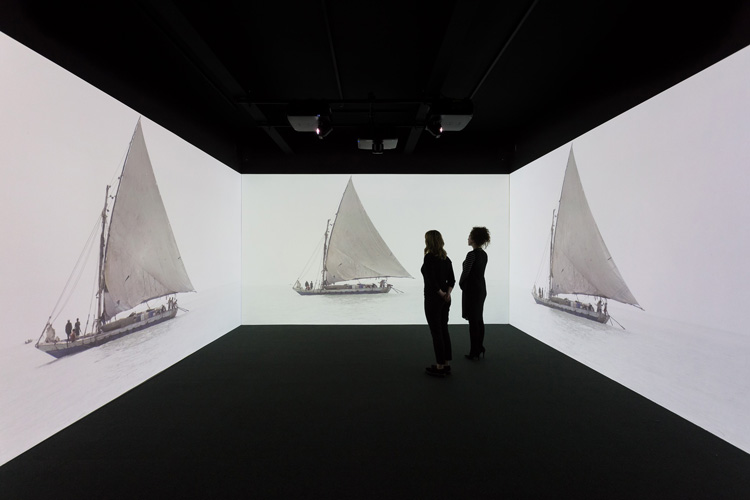