With 120 artists to choose from, this drawing show is stuffed with treasures. There is something here for everyone 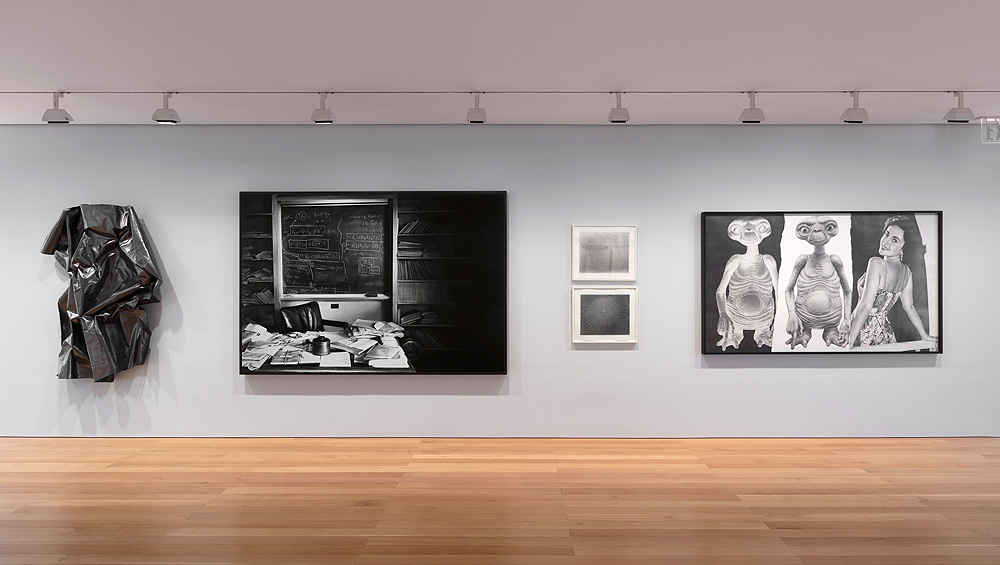 There is a full-course extravaganza of a drawing show at the Flag Art Foundation in New York’s Chelsea district, called Drawn Together Again. With 120 artists, from Kamrooz Aram and Ruth Asawa to Kehinde Wiley and Tsuruko Yamazaki, a number of your favourites will certainly be at the banquet table, plus, as an added treat, quite a few you might not be as familiar with, since the grouping extends beyond the usual suspects and across multiple generations and cultures. The formats and materials vary, as does the scale (from monumental to miniature); style (abstract to photographic); subject matter, point of view and mood (up, down, humorous, serious, political, social, intimate and more). In short, many bases are touched and there is surely something for everyone, and, happily, quite a lot of it. It also marks the 10th anniversary of a venue that has been hosting good to great exhibitions during that time and is still relatively, inexplicably, under the radar. 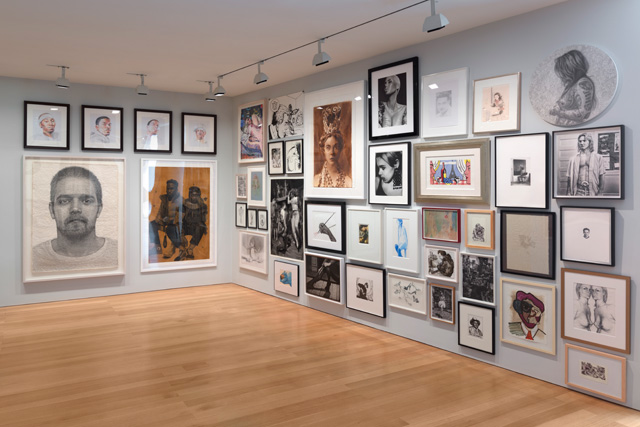 Culled from artists who had past associations with the foundation as well as some who have not, it includes students, alumni and faculty from the New York Academy of the Arts, and is inspired by a similar 2008 presentation. The works are necessarily hung salon-style, but without the sensation of elbowing that such close installations often elicit, each congenially assigned a seat. Partly, this is due to the 50-foot length of the main wall, partly to a room height that does not tower, partly because the configuration of the space feels open, aerated, helped by some windows that permit the entrance of daylight, and partly because the selection and installation were deftly, cannily made, curating the images so there are engaging, at times surprising visual conversations going on between the works. What these are will depend on the viewer. 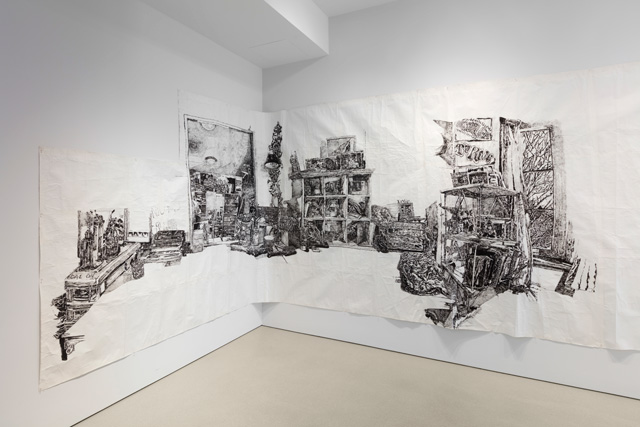 The first work you might encounter, if you enter the ninth floor gallery first, is Dawn Clements’s 2009 multi-part sumi ink drawing of an interior, Callie and Schuler’s (The Taft School), measuring more than 20 feet, definitely on the monumental side. The artist, who in 2018 died of cancer at the age of 60, has been bewitching her viewers for years with her enveloping, signature light-as-breath drawings and watercolours, most often of her home or from movie stills, inviting us into her space, transformed by the magic of her singular vision. The images are on irregular sheets of paper positioned from differing perspectives, reflecting the way we actually see. 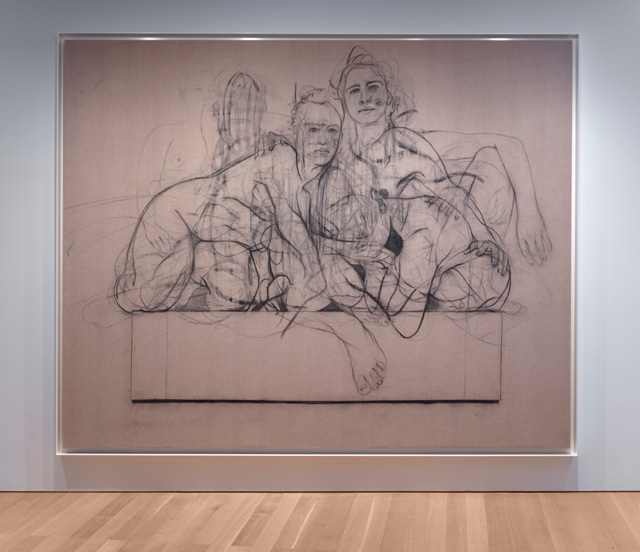 Commanding another wall in powerful splendour is Jenny Saville’s enormous charcoal drawing Thread (2017-18) of bunched-together, crouching figures vying for space atop a base. Equally riveting is Toyin Ojih Odutola’s greyscale The Flavor and Intent (2015) depicting two strapping, bust-length figures entwined in a fierce kiss that are so imposing they may make you think of sculpture, of a more contemporary Rodin’s The Kiss.

On the long wall of the 10th floor gallery is a lovely Brice Marden that is a little larger than a sheet of paper marked by a delicate tangle of colourful lines called Marrakech Drawing 5 (2017-18). Not so far away, there is another note of colour in Charles Ray’s ink drawing of a tree that is several times larger, the tracery of its branches and leaves picking up the rhythmic flourishes of Marden’s work. And what is a banquet without dessert, here offered by Wayne Thiebaud’s luscious triple-stacked ice cream cone. Will Cotton is also present, but weighs in with two portraits, one of a crowned Elle Fanning, instead of one of his almost edible rococo confections. 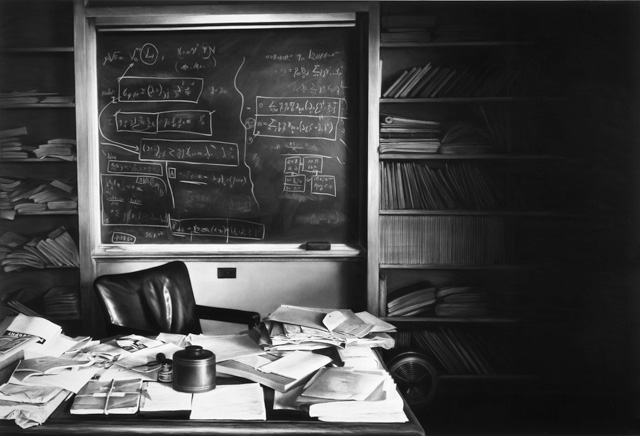 Portraits are the dominant mode, some more or less straightforward, including several by Kehinde Wiley. The one by Jay DeFeo is a portrait in absentia, a riff on Rogier van der Weyden’s superb Portrait of a Lady (c. 1455) in the National Gallery in Washington. Robert Longo’s masterful, photographic rendition of Einstein’s desk on the day he died might be considered another portrait in absentia. And Joan Semmel contributes a blurred, ephemeral nude self-portrait from her incomparable series spanning more than six decades – and still going strong. 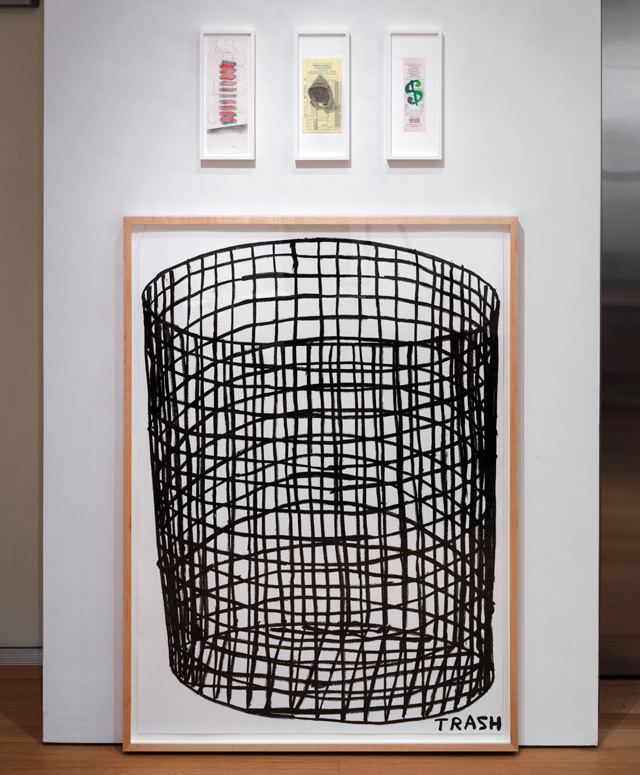 Then there is David Shrigley’s sketch of a wastepaper basket, propped against a wall. It is so lo-tech in form and content that it makes me smile. Why, I’m not sure. Maybe it’s the three Jonathan Monk works poised above it, one of a dollar sign attributed to Warhol. Although arranged into a kind of short story here, and funny, Shrigley’s economy of means coupled with his wry, off-the-cuff, easy sense of humour usually succeeds without backup.

All of these works, by the way, are works that let you look at them without talking back, without reading text, which can be a relief sometimes. So happy hunting ­– there are treasures here. 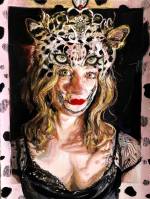 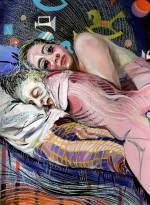 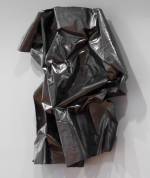