Jonathas de Andrade: With the Heart Coming Out of the Mouth – Venice Biennale 2022

Jonathas de Andrade: With the Heart Coming Out of the Mouth – Venice Biennale 2022

Giant ears, a massive inflatable heart and a disembodied head – De Andrade explains why he has filled the Brazilian Pavilion with an odd assortment of body parts

In one ear and out the other – this is the literal journey you must go on to experience Brazilian artist Jonathas de Andrade’s pavilion for the Venice Biennale. Two outsized ears frame the entrance and exit, guiding your passage through Brazil’s sleek, modernist pavilion in the Giardini, and announcing the inspiration that partly fuelled this exploration of tension, disembodiment and anxiety - that of his childhood visits to science fairs. 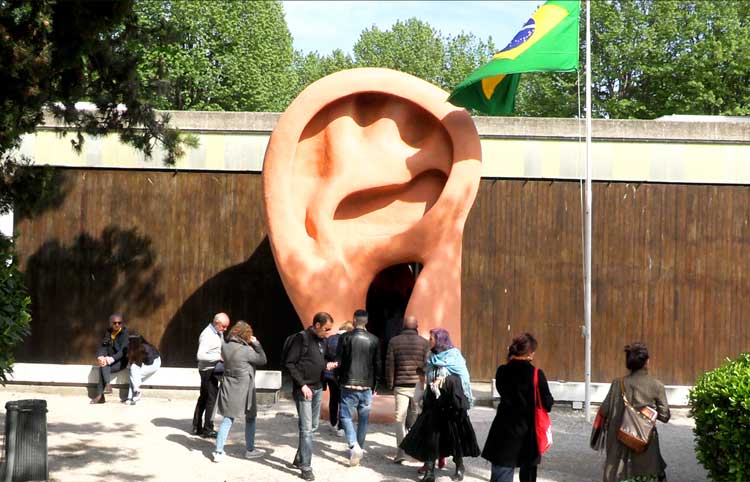 Along with the oversized ears, there is a disembodied Styrofoam head floating slowly up and down in one room, a giant tongue lying dismembered on the floor in a pool of blood. But the tone is in part playful as well as grotesque, reinforced by the main event, occurring at regular intervals: a crimson, fabric, inflatable heart drops out of a pink mouth positioned in the ceiling and slowly descends to the floor. Then, over several minutes, to the general surprise of the assembled viewers, it unfolds and expands sideways to fill almost the whole of the second room in this two-room space. 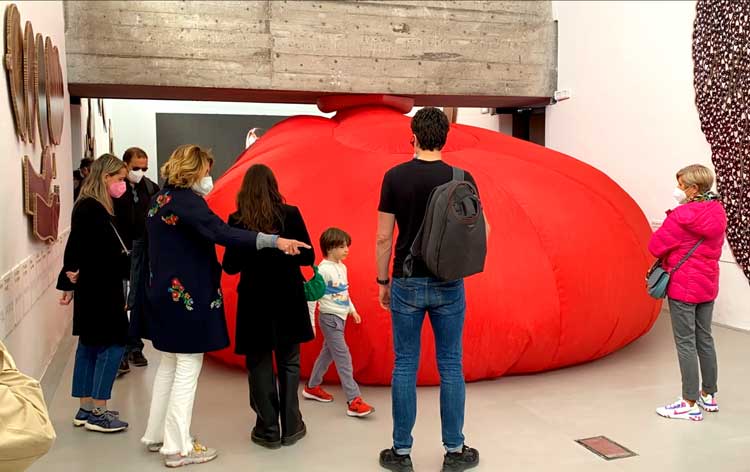 The artist’s intention here is to demonstrate the feeling of “the heart coming out of the mouth”, the English translation of this installation’s title, Com o Coração Saindo Pela Boca. This popular phrase illustrates a state of high tension, and echoes the English phrase “with your heart in your mouth”. It sparked the inspiration for the installation early on in his research explorations when De Andrade (b1982, Maceió, Brazil) started gathering regularly used local idiomatic phrases that figure body parts. 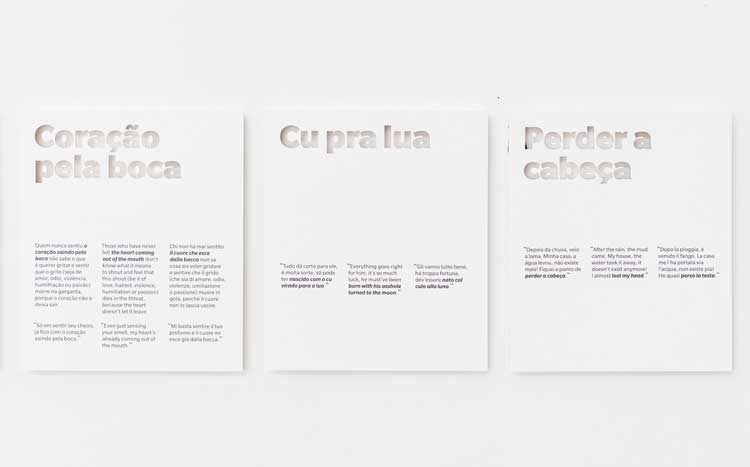 He tells us: “I collected 250 statements and to my surprise most of them would resonate with the political atmosphere in Brazil at the moment.” He has placed these phrases in captions, in Portuguese, English and Italian, quite low around the room, alongside vivid, cartoonish representations of the sometimes surreal, occasionally grotesque metaphors they conjure.

As for the ears at the entrance, he says they are “a great metaphor for how things happen politically. We have huge disasters going on and the ones who should react … are not hearing.” 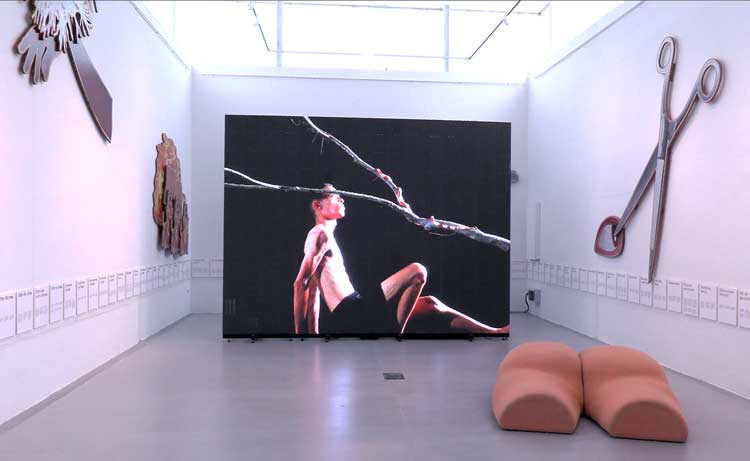 Ambiguity, ambivalence and a feeling of physical detachment, not quite being fully present in your body, are very typical of states of high anxiety – and we have all experienced those of late. But De Andrade wants this installation to make us think about where the danger, the menace that creates that anxiety comes from. Behind the inflating and deflating heart/mouth sculpture, there is a large screen playing another work, which he translates as “The Knot in the Throat”. Here, creatures from which one would normally run screaming – pythons, boa constrictors, assorted slim and very poisonous-looking snakes – interact with young people who clearly have complete faith in their connection with these dangerous species. He tells us these are all volunteers and handlers at a refuge for wild animals near where he lives. His film is a clear signal that it is not these animals we necessarily need to fear, so much as other humans. 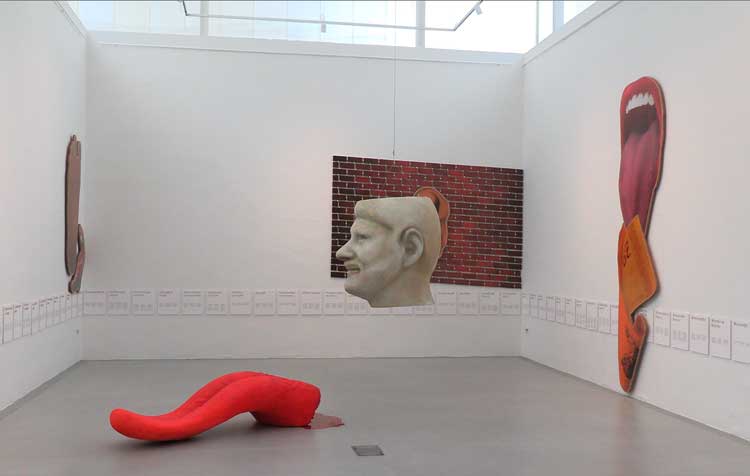 This is a landmark moment for De Andrade, combining all his skills in multimedia installations including film, found and often everyday objects (the sayings, essentially, are found objects) and sculpture along with the new, animatronic element. He previously won acclaim for his film O Peixe (The Fish), which debuted at the 32nd Bienal de São Paolo, in 2016, in which he films a Brazilian fisherman tenderly holding a fish as it dies. It was subsequently shown in a solo show at the New Museum, New York, USA (2017).

His Venice presentation was curated by Jacopo Crivelli Visconti, who was general curator of the 34th Bienal de São Paulo (2021).