The exhibition, John Makepeace: Enriching the Language of Furniture, at the Collins Gallery in Glasgow, presents a unique insight into a the work of a man who has been designing and making furniture since the days when he studied under a Dorsetshire cabinetmaker, Keith Cooper, in the late 1950s. Later on, Makepeace built his own reputation by establishing a creative community at Farnborough Barn near Banbury, Oxfordshire – a period also notable for the contribution made by his former wife, the designer/weaver, Ann Sutton – before moving to Parnham, an Elizabethan mansion in Dorset.

Here, he established his own residential school for Craftsmanship in Wood in 1977, with ten students as his first enrolment. As Jeremy Myerson has said, it was here that Makepeace “pioneered research into woodland design, manufacture and management” by extending his activities into the neighbouring Hooke Park. This enabled him to examine alternatives for 20th- and 21st-century production, mixing precious materials (including rare woods) with a concern for the least valued timber in the forest. Hooke Park is now an outpost of the Architectural Association in London.

Putting Makepeace into some kind of design classification is very difficult. In the catalogue I wrote for him while he was at Farnborough Barn, I said, “There are very few craftsmen in Britain today making modern, handmade furniture… What makes his work so special is his use of unusual and sometimes exotic materials, his meticulous attention to detail and finish, and his ability to produce both one-off pieces and runs of furniture for larger contracts”.

The catalogue illustrated a chest of drawers framed by a black (ebony?) casing that was so simple in its conception that it might have been Japanese; chairs and a glass topped table whose thick metal legs and supports were covered in green leather that made them very sculptural; and a boardroom table and chairs whose form was simple and paired down – suitable, obviously, for a contemporary building.  There was also the birch ply tower of drawers that swing out that is part of a series in different forms (a curved rather than rectangular version in the Collins Gallery belongs to the Victoria & Albert Museum, London). This, unquestionably, was 20th-century design and craftsmanship.

However, I also remember being surprised by the furniture made for the centennial of the London store, Liberty’s, in 1975 because the table in limed oak has a very heavy, organic form (its base especially) while the knobs on the chair legs and arms make them look as if they were made by a rural craftsman. So, putting Makepeace furniture into a precise classification stylistically is impossible; and, if anything, this has become increasingly so as his career has progressed.

The choice of materials – especially the rarity of some of the woods – and the meticulous attention to detail and execution remain the same, but what is clear is that Makepeace can now think, design and make (using his own craftsmen) while ignoring the pressures of time or money. Indeed, one piece in the exhibition – one of a pair of cabinets in black oak and holly called Zebras that uses marquetry to create its distinctive pattern – costs £90,000, and any buyer must purchase the pair. The cabinet also demonstrates how Makepeace keeps up with the latest technology because a computer was used in its design and laser cutting to perfect the closure of the doors that conceal the cabinet’s red interior.

Technical sophistication also applies to the way wood itself is used. For the Trine chair made for an Art Nouveau house in Belgium, “the aim”, the catalogue explains, “was to develop a structure where the legs and back were projected off the sculpted seat platform … The seat platform, comprised of alternative layers of yew and bog oak, was curved side-to-side and then reduced in thickness to encourage good posture, reduce weight and reveal the internal structure … This high-performance construction applies to the principles of material science using stainless steel and epoxy resin to achieve performance results”.

In another version of this chair, the legs and arms become one, using multiple layers of yew that are both bent and twisted. There are nine connections to the seat and back.

Makepeace not only considers the materials and methods of construction carefully: ergonomics also play an important part in his design. In the fireside desk made in paldao, suede and stainless steel for a lady with several, different interests, there is lateral filing for personal correspondence; a low writing table that rotates over her lap; pivotal trays for paints and brushes; and generous containers for her sewing requirements.

Similarly, the Trilogy desk in cherry, bog oak, stainless steel and bronze was made for a senior executive in the music industry who needed to talk to clients in three time zones. So the three-sided desk has three work positions, each with its own storage. This not only clarifies his work procedures but also provides him with different views as he moves around his “work station”.

Finally, expensive as Makepeace furniture is, the exhibition does contain a limited number of tables, chests and stools in burr elm whose prices (the stools) are around £1,000. 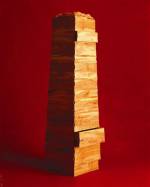 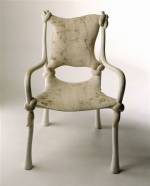 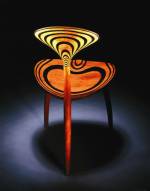 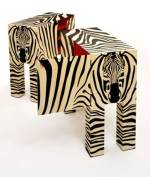