Less and More &ndash; The Design Ethos of Dieter Rams

Less and More –
The Design Ethos of Dieter Rams

The exhibition, Less and More - The Design Ethos of Dieter Rams, at the Design Museum in London is the first to present a definitive exposition of the career of Dieter Rams in the UK for more than 12 years.

But Less and More could also have been called “How Braun regenerated the Modern Movement in Germany after the Second World War”. For, following the death in 1951 of W. Max Braun, who founded the company in Frankfurt in 1921, his two sons, Artur and Irwin, abandoned the radios with their mahogany cabinets and decorative flourishes and, instead, adopted a radically new design philosophy that was carried through to every aspect of the company’s activities – from its products to its graphics, advertising and exhibition design. This philosophy was generated with the help of Otl Aicher, who was a founding member of the Hochschule für Gestaltung at Ulm, which for a decade or so, attempted to re-establish the Bauhaus. Aicher was responsible for developing Braun’s corporate identity programme while Fritz Eicher, who also taught at Ulm, became the company’s programme director and a member of the Board. They were joined by Hans Gugelot, and in 1955, by Dieter Rams who became Braun’s chief designer in 1961.

Rams’ background had two distinct features: he was trained in both architecture and design at the Werkkunstschule in Wiesbaden but, influenced by the fact that his grandfather was a master cabinet-maker, Rams also qualified as a journeyman carpenter. Indeed, photographs in the exhibition by Todd Eberle show the walls of Rams’ workshop covered by woodworking tools. Before joining Braun, Rams had worked with Skidmore, Owings & Merrill on the design of early 1950s American consulate buildings in West Germany so perhaps it is not surprising that he has always acknowledged the influence of Modern International Style architects such as Gropius, Breuer and Mies van der Rohe (all ex-Bauhaus). And, taking up ideas from the Bauhaus, Rams stated that “I want to make things that recede into the background”, while adopting, among his ten principles of good design, the belief that it should be innovative, aesthetic, durable and useful. And out of these beliefs came the spare, formal and geometric style associated with post-war Germany.

Looking especially at the radios and radio-phonographs in the exhibition, it is easy to see why Braun products are as recognisable as those made by Bang & Olufsen in the 1950s, 1960s and 1970s. In the case of Bang & Olufsen, its radios, radiograms and loudspeakers look like very sophisticated scientific instruments with their spare use of dark red wood, white surfaces for push button and sliding controls, highly polished metal turntables and transparent plastic lids. Braun products, on the other hand, are much more domestic. Radios and radiograms of the same period are often housed in light coloured wooden cabinets that contain white control panels and dials, switches and buttons arranged in groups according to function with discrete labelling and colour. As with Bang & Olufsen products, lids are made of transparent plastic.  Many of Rams’ designs are architectural in appearance and some have an affinity to those by Charles and Ray Eames, and Achille Castiglioni, who were also interested in the link between craft and manufacturing processes. With the logically-placed and spatial definition of their controls, Braun products speak of a purity and clarity of design that is unmistakably linked to the time when they were produced.

Rams’ early work, often done in collaboration with Gugelot, included the 1956 Phonosuper radio-phonograph (no SK410) that was known as the Schneewittensard (Snow White’s coffin) but, besides the radios and what we would now call record players, Rams’ designs for Braun also include tape recorders, alarm clocks, watches and clock-radios, pocket calculators, loudspeaker columns, projectors and other photographic equipment, televisions, electric shavers and cigarette lighters. He also designed furniture (from 1957) for a company now known as Vitsœ. His designs include the RZ 62 chair that was chosen by Florence Knoll for her villa in Florida (1962); the Dafne folding chair (1979); the 620 Chair Programme (1962); and the 606 Universal Shelving System (1960). Only the last two are still in production. And he collaborated with Angela Knoop on the design of cast aluminium and thermoplastic door handles for FSB.

At the Design Museum, the exhibition itself is laid out with a clarity and sense of space that sometimes makes the products seem a bit precious, as if they are to be viewed by the connoisseur. But this is alleviated the inclusion of archive film footage, sketches, models and prototypes, and the photographs by Todd Eberle. There are also specially commissioned interviews with Rams’ contemporaries, including Jonathan Ive, Jasper Morrison, Sam Hecht and Naoto Fukasawa. There will also be a panel debate on “The Ten Principles of Dieter Rams” at the Goethe Institute, 50 Princes Gate, London SW7 2PH on 2 March at 7.15 pm. 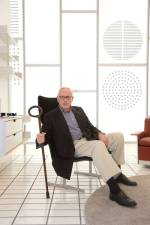 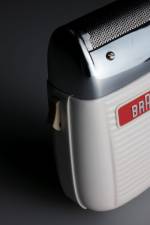 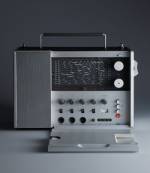