A Symphony of Colours and Shapes: Color Moves: Art and Fashion by Sonia Delaunay

A Symphony of Colours and Shapes

These elements came together in Delaunay’s precise and seemingly infinite imagination as hundreds of fabric designs, some of which were used for her own fashions and most of which were sold to fabric houses, department stores and producers of home décor.

The show is notable as the first US exhibit in just over 30 years to focus on Delaunay’s work – the Albright-Knox Gallery in Buffalo, New York, gave her a retrospective in 1980, two months after she died on 5 December 1979 – and unique in holding up her work in fashion as a critical aspect of her career. In January 2011 (until 5 June), the Albright-Knox Gallery opened a show in which Delaunay’s paintings hang along with works by Pablo Picasso, Georges Braque and Fernand Léger, all 20th-century pioneers of abstraction. The Cooper-Hewitt show examines Delaunay the pioneer in an alternate, but entirely essential, medium.

The origins of her texture-rich technique, a patchwork quilt made in 1911 when her son, Charles, was born, point to Delaunay’s own origins; born in 1885 as Sarah Stern to Jewish labourers in Ukraine, Delaunay was familiar with the handmade items typically found in labourers’ homes. After the age of five she lived in St Petersburg with her wealthy uncle and his family, where she learned embroidery and acquired other accomplishments expected of an upper-class woman. A Jewish intellectual, Delaunay’s uncle provided her with an impressive range of cultural and intellectual opportunities, as well as training in art.

Color Moves covers two periods: the 1920s, when Delaunay operated her own studio, Atelier Simultané, in Paris, and the 1930s, when she developed a close relationship with the modernist Metz & Co. department store located in Amsterdam and its director, Joseph de Leeuw. A main contributor to the exhibit and author of two of its catalogue essays, Matteo de Leeuw-de Monti, grandson of Joseph de Leeuw and son of Joseph’s successor, Hendrik de Leeuw, offers insights into Delaunay’s methods via meticulously researched records from the Metz & Co. archive.

It is clear from the amount of her work, the bravado of her designs and her correspondence with Joseph de Leeuw that Delaunay was ambitious, self-confident and eager to succeed. Partly, Delaunay needed to earn quite a lot of money to support the lifestyle to which she and her husband, the painter Robert Delaunay (1885–1941), aspired. Frequently, Delaunay put her aspirations as a painter on hold so that Robert could pursue his theories. Together, from when they married in 1910, they formulated a movement that came to be known as Orphism. Current with the emergence of Cubism and Fauvism, Orphism reflected aspects of those movements but focused on the interplay of pure abstraction and vivid colours. The Delaunays claimed that certain combinations created rhythm and movement so that, looking at a painting in this style, the eye would be directed as colours radiated through and from the canvas. A perfect example of how colours and shapes move the eye appears in Color Moves, a Delaunay dress design c1925–1928 made of printed silk with metallic embroidery.

While art historians have recorded many convergences between the Delaunay’s personalities and work, they have remarked on Delaunay’s intuitive approach and Robert’s predilection for theory. With Orphism, their similarities and differences came together. In the catalogue, Deputy Curatorial Director and Head of the Textiles department at Cooper-Hewitt, Matilda McQuaid, says that Delaunay’s work reflected her interest in such effects even before Robert expressed his theory:

“In the first two decades of her career, she exercised principles of simultaneity in all media, and with an intuitive approach that began in 1911 (a year earlier than Robert Delaunay’s theory of simultaneity) with the colourful patchwork quilt she made for her newborn son, Charles.”

McQuaid describes the quilt as a “collage of different colours and textured fabrics cut out in a variety of geometric shapes, like her designs for book covers and textiles in subsequent years and decades.” Although Delaunay adapted her designs to changing tastes, from tight geometrics in the 1920s to larger, softer-hued and more feminine patterns later on, she drew from principles established early on: she intended for her designs to make a statement that was artistic, novel and modern.

Color Moves examines Delaunay’s instinct for the modern in all things, including literature (eg, her collaborations with the Dadaists and, in 1913, with Swiss-French poet/novelist Blaise Cendrars on an accordion-folded, 22-panel sheet of paper telling the story of a young poet’s train journey from Moscow to the Sea of Japan). Visitors will see a number of watercolour illustrations made for Delaunay’s embroidered Robes Poèmes printed on silk. The robes became “poems in motion” worn by Delaunay’s famous friends, as catalogue contributor Petra Timmer calls them. Wherever she lived or went, Delaunay found collaborators; while living in Spain, the couple worked with Serge Diaghilev on his ballet Cléopâtre; Robert designed the stage sets, Delaunay did the costumes.

The bulk of Color Moves consists of drawings, fabric samples and design cards displayed in cases. One might suppose that, after viewing a number of them, the eye might wander or seek for a diversion. Yet, strangely, this does not happen. In fact, the opposite effect occurs, and it is easy to see how Delaunay was able to spend so much time and so many years – when she might have been pursuing her stated first love, painting – to choosing different colour runs, testing the results on various fabrics, modifying designs and adapting them to current tastes. Among the few fashions displayed are embroidered and block-printed bathing costumes; cotton canvas driving caps and a knitted wool shawl the colour of a shiny lemon drizzled down the centre with chocolate sauce. Photos evoke Jazz-age Paris and the ultra-modern circles in which the Delaunays travelled: Delaunay at her Paris Studio; the Boutique Simultané at the 1925 Paris Exposition des Arts Décoratifs et Industriels Modernes; models wearing her coats in or around one of the era’s symbols of modernity, the automobile; and an actor wearing a Delaunay costume from the 1926 French film Le P’tit Parigot.

The section devoted to Delaunay’s association with Metz & Co. spotlights the ferocious rate at which she worked. Here, the curators have included designs by two other Metz-promoted artists, Bart van der Leck (a founder of De Stijl) and Gerrit Rietveld (creator of the Zig-Zag chair), created during the period that Delaunay worked with them.

No doubt, Cooper-Hewitt’s other featured exhibit of more than 350 opulent examples of Van Cleef & Arpels jewellery designs for the likes of Princess Grace of Monaco, the Duchess of Windsor and Elizabeth Taylor has drawn greater crowds than Color Moves. But viewing both shows together is worth the risk of sensory overload and trying to decide which item one would prefer: an embroidered Delaunay coat made for American silent-film era icon Gloria Swanson or a pair of diamond brooches worn in 1961 by then First Lady Jacqueline Kennedy to a dinner at Versailles. It appears that the risk is a win-win situation. 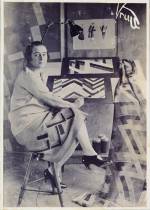 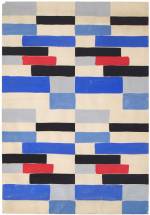 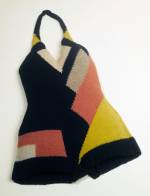 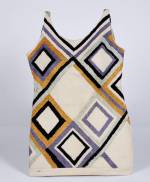 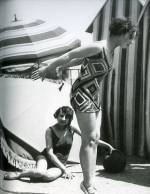 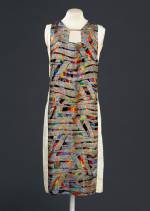 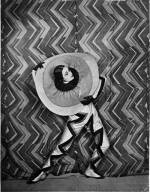 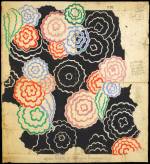 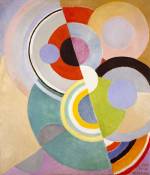 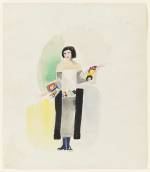