A key figure of early 20th-century Parisian avant garde, Sonia Delaunay has often been cast in a supporting role to her husband, modernist Robert Delaunay. A major European retrospective puts the record straight and shows her impact on the international world of fashion

Sonia Delaunay was a Paris School painter and designer. The Ukrainian-born artist played a vital role in the story of modern art as it unfolded in the 20th-century avant garde. The abstract artist was a pioneer of simultanisme (orphism), which she and her husband Robert Delaunay developed out of cubism in the mid-1910s. And she was the first living woman to have an exhibition at the Louvre. Yet she is little mentioned in art history books on the era, such as The Story of Modern Art.1 Now you can rediscover the artist in a major European show, which is on display in Paris through the winter and will travel to London in the spring.

Sonia Delaunay: Les Couleurs de l’Abstraction at the Musée d’Art Moderne de la Ville de Paris is the first major Parisian retrospective devoted to the artist since 1967.2 Organised by the Musée d’Art Moderne with the Bibliothèque Nationale de France and the Pompidou Centre, it brings together more than 400 works, including paintings, murals, gouaches, prints, textiles and fashion designs. Finely curated by Anne Montfort and Cécile Godefroy, it explores the evolution of the artist from the early-20th century to the 1970s. The galleries give the impression of stage sets, adorned with rare gems of colour, which are a real delight to see. When the show opens in London on 15 April, it will be the first UK retrospective to assess the breadth of the artist’s career.

Delaunay (née Stern, then Terk) was born in 1885 to a working-class Jewish family of three children. At a young age, she moved to St Petersburg to live with her maternal uncle, a successful lawyer. Through his family, she received the cultural sustenance of the bourgeoisie. Travels through Europe acquainted her not only with the galleries of the Hermitage, but also the Uffizi in Florence and the Munich Pinakothek. In 1904, she studied painting at the Academy of Fine Arts in Karlsruhe, Germany. She arrived in Paris in 1906, the year in which Paul Cézanne’s Les Grandes Baigneuses (c1894-1905) was exhibited. With his pictorial fracturing, Cézanne signposted the way for Pablo Picasso and Georges Braque, who, “roped together like mountaineers”, as Braque said, pioneered cubism, recognised as one of the turning points in western art.

On arrival in Paris, Sonia discovered the post-impressionists Paul Gauguin and Vincent van Gogh, and absorbed the influence of the Fauves, such as Henri Matisse and André Derain, who used bold colours and a wild application of paint to create expressionist works. Early in the show, you can see paintings remembering her childhood holidays in Finland, such as Jeune Finlandaise (1907). The vibrant colour and pictorial arrangement of the artist’s figures, which stand against ornamental backgrounds, portray the influence of Matisse. Nu Jaune(1908) is painted in the tradition of Édouard Manet’s masterpiece Olympia (1863). The painting suggests a primitivism that is reminiscent of Matisse’s Blue Nude, Souvenir of Biskra (1907) and calls to mind the expressionism of Die Brücke, a group of German expressionist artists active in Dresden at the time.

In 1910, Sonia married Robert Delaunay and, in 1911, gave birth to their son, Charles. The cradle cover she designed, Couverture de Berceau (1911) is modelled on textiles of Russian peasants, but has a cubist pattern, which is typical of how she applied art to everyday life. By 1912, she and Robert were pioneering a new approach to cubism called simultanisme, also known as orphism, a term coined by the poet Guillaume Apollinaire.3 Sonia emphasised the dynamic power of colour and drew on her reading of the French chemist Michel-Eugène Chevreul. The chemist had an effect on the impressionists with his book, De la loi du contraste simultané des couleurs, published in Paris in 1839, and his theories formed the basis for the Delaunays’ experimentation.4

The title of Sonia’s painting Contrastes Simultanés (1912) translates his ideas into a visual language of simultaneous, contrasting colours, which enhance each other, and in turn, add greater vibrancy to the painting.

While Robert wrote about “rhythmic simultaneity”,5 and produced paintings, such as a series entitled Les Fenêtres simultanées sur la ville (1912), Sonia understood the effect of contrasting colours within the context of everyday life. The artist decorated boxes, produced book designs and fabrics, experimenting with the applied arts. Yet she often displayed a refined sense of poetry in her work. One of the highlights of the exhibition is a “simultaneous book”, which can be folded like a concertina. Entitled La Prose du Transsibérien et de La Petite Jehanne de France (1913), it was produced with Sonia’s great friend, the globe-trotting poet Blaise Cendrars. The poem is based on a journey on the Trans-Siberian Express. At the time, its fragmented, modernist design was revolutionary. The work is viewed as a masterpiece of avant-garde literature and poetry, because it presents such an original fusion of poetry and painting.

One of the unifying themes of the exhibition is the artist’s fascination with natural and electric light. Sonia often explored the simultaneous contrasts of colour that she observed around the city. The modern life of Paris inspired a selection of remarkable studies of crowds on the Boulevard Saint-Michel, where she recorded the modernising effects of Baron Haussmann’s new boulevards. The play of light across swirling figures in a dance hall creates a sense of movement in the series of Le Bal Bullier (1913) and the colour of technology has a magnetic aura in Prismes Électriques (1913). Together, they give an impression of the dynamism and energy of modern life.

Surprised by the first world war, the Delaunays took refuge in Spain and then moved to Portugal, where Sonia continued her figurative studies. At this time, she painted flamenco dancers and captured the radiant light of the countryside and the colour of popular markets, as seen in orange-sellers. On returning to France in the 1920s, she created “dress poems” and costumes for the dadaists in Paris in 1922-23. The following year, she set up a textiles workshop, and then opened a boutique, La Maison Delaunay, and collaborated with the Dutch store Metz & Co. The 1920s were halcyon days for Sonia, during which she made an impact on the international world of fashion. In particular, she designed a wonderful coat in a geometric pattern for the American actor Gloria Swanson, which is on display in the museum. The glorious decade marked the culmination of the colourful, lyrical movement of simultanisme. The Depression cast a long shadow over the business. However, the artist’s foray into fashion anticipated the 21st-century evolution of the Finnish brand Marimekko, whose contemporary design language refers to orphism and the work of Sonia Delaunay on its website. Not only does this major European retrospective show why she was a doyenne of the 20th-century avant garde, but it reveals how her legacy brings art to everyday life today.

References
1. See The Story of Modern Art by Norbert Lynton, published by Phaidon, 1980.
2. See Rétrospective Sonia Delaunay. Musée National d’Art Moderne, Paris 1967-1968, a catalogue compiled by Michel Hoog, published by Musée National d’Art Moderne, Paris, 1967.
3. The Oxford Dictionary of Art describes orphism (or orphic cubism) as follows: “The word ‘Orphism’, which had previously been used by the Symbolists, was applied to the movement by Guillaume Apollinaire at the exhibition of the Section d’Or in October 1912: the reference to Orpheus, the singer and poet of Greek mythology, reflected the desire of the artists involved to bring a new element of lyricism and colour into the austere intellectual Cubism of Picasso, Braque, and Gris.” See The Oxford Dictionary of Art, published by Oxford University Press, 1997, page 409.
4. See Sonia Delaunay: The Life of an Artist by Stanley Baron in collaboration with Jacques Damase, published by Thames and Hudson, London, 1995, page 30.
5. See Robert Delaunay, Light, 1912. In: Theories of Modern Art: A Source Book by Artists and Critics, by Herschel B Chipp with contributions by Peter Selz and Joshua C Taylor, published by the University of California Press, 1968, page 319. 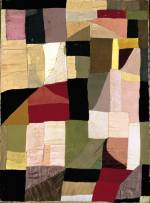 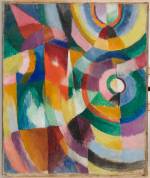 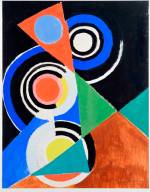 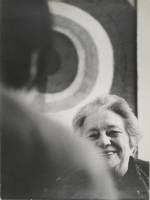