Sam Stewart: ‘From a psychological perspective, working in someone's home is a loaded experience’

Sam Stewart: ‘From a psychological perspective, working in someone's home is a loaded experience’

For his first solo exhibition, artist-designer Sam Stewart transforms an unoccupied space within a New York townhouse by imagining the life of its mythical occupant 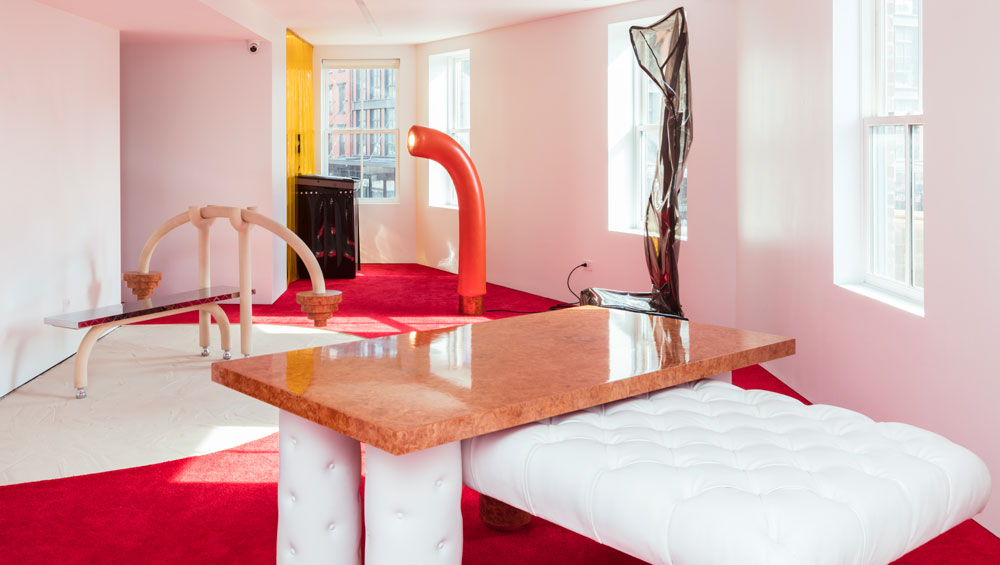 As a designer of furniture, with a specialism in tables and chairs, New York-based artist Sam Stewart (b1988, North Carolina) is familiar with the confines of domestic and residential settings. In his relatively short career to date, he has created curvy-edged furnishings for a restaurant commission, crafted custom pieces for private clients, and presented a cloud-shaped cocktail table accompanied by equally shapely stools (Untitled (forecast set), 2017) at last year’s New Art Dealers’ Alliance art fair. For his debut solo show, at Fort Gansevoort in Manhattan’s Meatpacking District, Stewart has returned to the realm of the home, but this time his project has taken a less conventional turn. 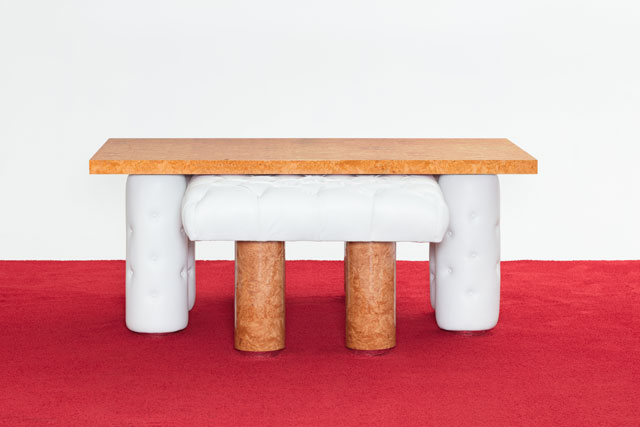 Cryptid comprises six sculptural works, including a floor lamp, modified treadmill and bench press, which Stewart has installed on the second floor of a townhouse situated directly next door to Fort Gansevoort, which recently became available to the gallery. As the space is zoned for residential use only, Stewart began to envisage a fictional occupant, consequently making a series of objects that casts light on who this person could be. The large-scale pieces on display, which all closely correspond and appear to interact with one another in the compact space of the apartment environment, confirm how personal belongings reveal private narratives, as well as wider cultural tendencies. Although the ambience generated by Stewart’s stark sculptures is strangely ominous, the appointment-only set-up of the exhibition helps to accentuate the homely quality that is essentially at its heart, no matter how dark. 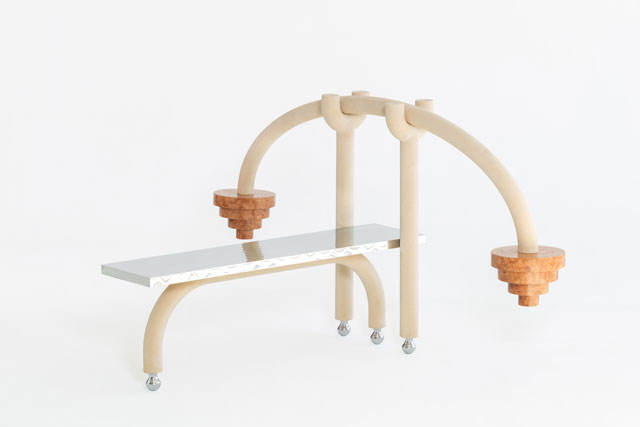 Allie Biswas: The premise of the exhibition revolves around a series of objects that are envisaged as belonging to an imagined person, within the environment of their home. Given this, I am surprised by how large the works are. I was expecting a much smaller scale.

Sam Stewart: I think the point about scale is pretty apt. A lot of the works I make are first created on SketchUp, which is a 3D rendering app. It’s quite basic, almost analogue; it’s not what most architects or designers use. But you can render things in virtual space, to scale, and I find it a helpful way to create a sketch or a concept for a new work. I started using it six years ago and quickly noticed that, when you see images, you can’t quite tell what the scale is, and how the forms will operate in real space. I like that. It’s something I have tried to emphasise in a lot of my works.

AB: You studied maths and philosophy at university, and did not formally train as a designer. How did your interest in making furniture develop?

SS: It never occurred to me to study art. That wasn’t a kind of reality for me. My dad is a carpenter, so, in a way, I grew up on job sites. I’d accompany my dad when I wasn’t at school, or at weekends, occupying myself by hammering things together. A good friend of his, a cabinet-maker called Peter Hall, who helped me to make the chairs in this exhibition, shared a space in the same warehouse where my dad stored a lot of his equipment, for 40 years. I would come in and see Peter working on furniture; he was particularly interested in the Appalachian style. I remember thinking in high school that I would one day love to collaborate with Peter, to make one of these chairs. But one thing that bothered me is that I felt the furniture was stuck within this folk style – I was more interested in developing it further. 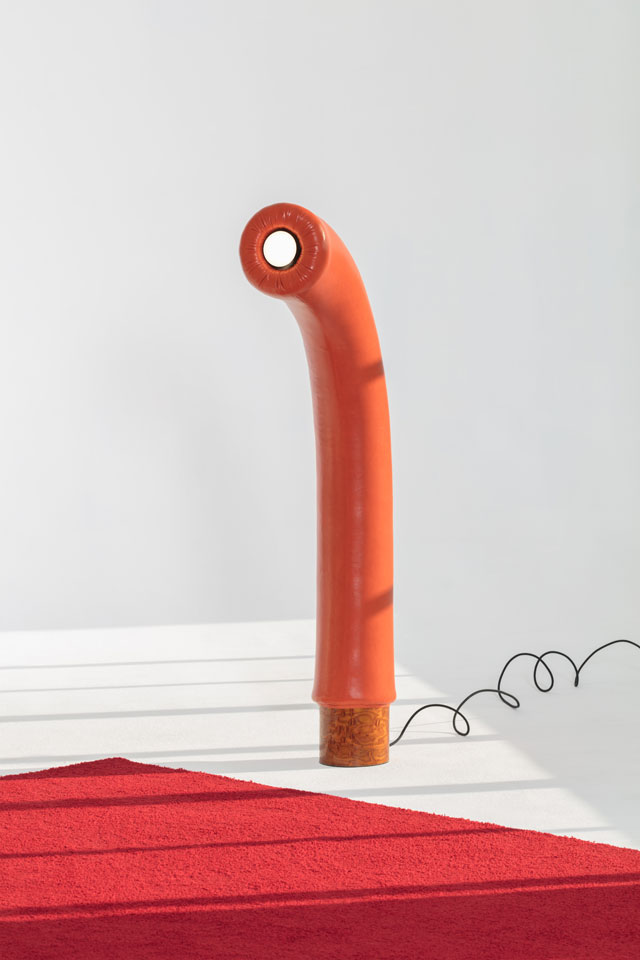 AB: What types of design did you find influential? When did you begin to be exposed to other kinds of furniture-making?

SS: When I came to New York, after graduating, my first job was working at the Barry Friedman gallery, where I was art-handling. I didn’t have set ideas of what I would do post graduation. Through the gallery, I got exposed to so much 20th-century design and art. I didn’t even know that the Chelsea galleries existed prior to taking this job. It was like discovering that I had this passion quite late on in my life. Obviously it evolved, and now I can’t imagine any other existence, but it was really developed from scratch.

AB: Was it during this time that you started thinking about making your own work?

SS: Yes, I began a studio practice while working at Barry Friedman. They had a workshop in the basement, where I would work at the weekends. The first thing I made was a chair. I made it from a water tower that the gallery had taken down from its roof. One of the artists represented by the gallery was the designer Charles Rennie Mackintosh. I liked the straight-back chairs that he had made, and I wanted to make a version of that through my own lens. I remember I had this scrap wood, and it probably took me three or four months to make it. At that point, it started to occur to me that I did have a passion for woodworking and working with my hands. 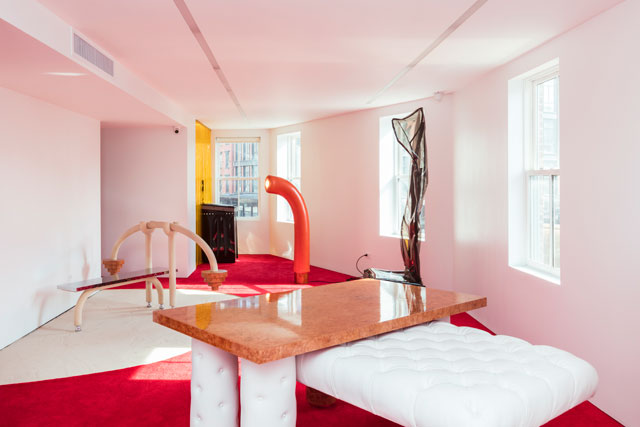 SS: I quickly realised that I had an intuitive sense. I had an eye for how things should be joined and how they should appear when finished. I guess some of this resulted from having been exposed to these things when I was growing up.

AB: What about formal decisions? When did the aesthetic of what you were making become a focus, rather than just how you were building something?

SS: I think it just developed, the more I learned about other artists who were making work that was concerned with design or furniture. It was about using that history to create these sculptural works. Richard Artschwager was one of the first people I discovered, which was amazing. Lucas Samaras, who was known mostly for his boxes, was another important person. Ettore Sottsass, the Memphis Group designer, and Jean Prouvé were also important. All of my knowledge about these artists was through the gallery. Then, as I went along, I realised that the artists who were making furniture were not necessarily furniture-makers. It wasn’t just about functional or formal developments. I started thinking about conceptual artists such as Lucy McKenzie and Mary Heilmann. I also remember seeing the Marcel Broodthaers show at the Museum of Modern Art, which was huge for me.

AB: Although the works you have created here for this imagined domestic space are functional – tables, chairs, a bench press – the materials and forms you have incorporated make it obvious that these objects are not to be handled.

SS: These works are not utilitarian. I started participating in group exhibitions from 2013, although I wasn’t doing too many as I felt that I needed to develop a language. I have pretty strong feelings about when to participate and when not to – you don’t want to get stuck in a cycle of not really developing what it is that you are doing, which I think can happen if you are just showing. So I took some time and tried to develop a language. I tried for a long time to keep the studio practice and my more functional work separate. By functional work, I mean the furniture commissions that I was taking. In both situations, I’m kind of an impostor – I’m not a formally trained artist and I’m not a formally trained designer. I’m pretty selective about who I work with, but I still take commissions. I don’t have an interest in working with someone who thinks that I’m coming in to be an interior designer, and I don’t feel like there is an issue with that any more – I think it's pretty clear. I like working with very specific, defined spaces, which I think is what somebody’s home is. And I like to think of homes as philosophical models that I can create work within, almost in this vacuum. That influences the work seen here very much. I had to invent someone in this space – nobody was here to inspire the work. From a psychological perspective, working in someone’s home is a loaded experience.

AB: What was the first work that you created for the exhibition?

SS: The first work was the floor lamp. I found a really nice synthetic leather that is used a lot for automobile interiors. Then I used ash burl at the bottom of it. I started by wanting to work with materials that are considered luxurious. Or, rather, they have the facade of luxury. This brings in a different element – it feels a little dated. All of the works here have an aspirational quality – they want to appear as expensive. Burl is the perfect veneer for creating a middle-class individual who wants to appear wealthier.

AB: An aspiring individual who wants nice things in their house?

SS: Or things that at least appear to be nice. There is this level of wealth that I am seeing now that isn’t exactly old money, but it is far, far beyond a middle class. We are in this period, within this range of wealth, that I feel is similar to the architecture and design that you see in the Victorian age. They were able to create facades – the neoclassical, for instance; decorative elements that were not actually made in an artisanal way, but appear to have that effect. I see a lot of that now. There is this broad spectrum of people who can afford expensive things such as iPhones – there is this access to this facade of wealth. I wanted to point to that with the burl veneer. The material decisions tell the story for me.

AB: You make this point particularly strongly with the bench press, which looks extremely heavy, as though it is made from marble, but it is actually made from MDF that has had a mixture of sand and glue applied to it.

SS: Exactly, it’s actually made from very cheap materials. The seat of the bench press is made from quilted stainless steel, which is used almost exclusively on deli carts and kitchen splashbacks. It started to occur to me, as I was thinking about the works, that the occupant of this apartment would need to follow the routines of daily life, meaning eating, sleeping and exercising. I wanted to materially combine things that identified with these routines.

AB: The reference to the physical body is most noticeable through the treadmill you have positioned in the kitchen area of the space, alluding to how the body functions in various spheres.

SS: I wanted to point towards the use of exercise for sculpting the body, and how this fits into one’s self-image and success in the world. I wanted to go beyond the treadmill, though, which is why I have put it at the height of a conveyor belt – a reference to the kitchen. The exhibition isn’t just about considering the objects that this imagined person would want to live with: it’s the motivations that they have, that directly relate to their body image. I think that’s why I wanted the exercise equipment to occupy a lot of space here.

AB: Overall, the exhibition suggests that whoever lives in this space has a cohesive sense of how they would like to be perceived – through their furnishings, through their physical body.

SS: I have always been so interested in telling a story through materials. In this instance, I am combining materials that may or may not belong together to tell a story. I am always very impulsive – there really isn’t any second-guessing.

• Sam Stewart: Cryptid is at Fort Gansevoort, New York, until 24 March 2018, by appointment only. 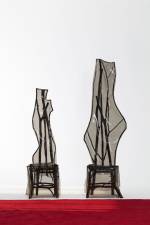