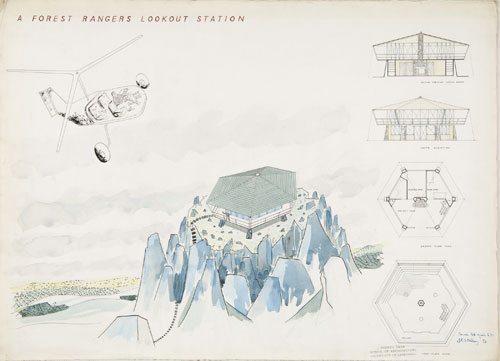 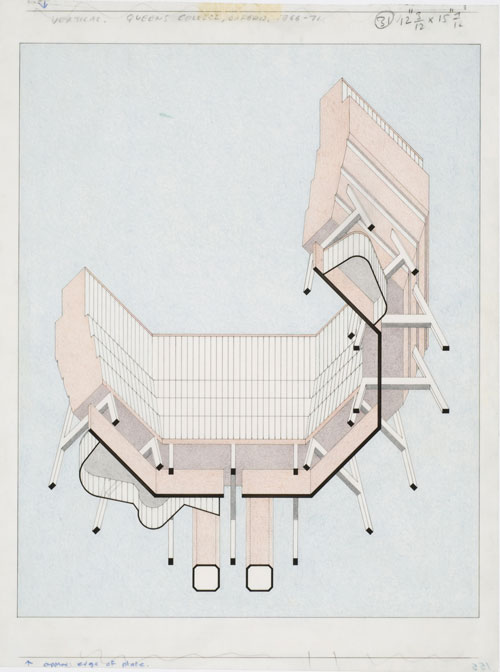 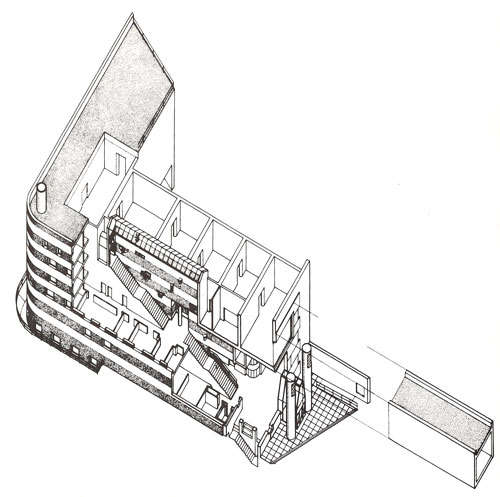 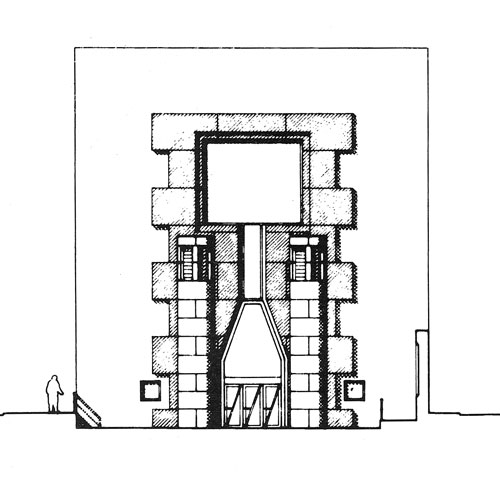 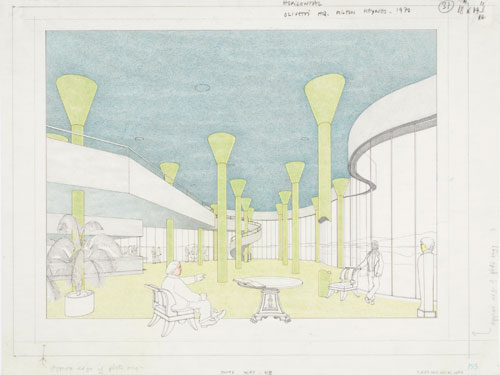 The undoubted architectural event of 2011 has been this selection of key items from the Stirling Archive held by the Canadian Centre for Architecture (CCA) following its transfer there some five years ago. It is two decades since Sir James Stirling died tragically and prematurely as a result of a hospital accident. This occurred at a pivotal time in the development of modern architecture in the wider frame. From the 1980s onwards Stirling had bemused his large corpus of admirers by pursuing, as distinct from his earlier modernist practice, a distinctly eclectic and historically motivated direction, as epitomised by the Arthur M. Sackler Museum at Harvard University (1979–85). This is a separate museum, equivalent to the adjacent Fogg Art Museum and by no means just “a wing of the Fogg”.

Stirling and Wilford's achievement was followed by the extension at Tate Britain (1985). But perhaps the best known of all Stirling and Wilford buildings from the 1980s are the Arthur M. Sackler Museum at Harvard University and the Staatsgalerie Museum New Building, Stuttgart (1977–83), which is of growing importance internationally. By such means Stirling had truly broken the mould that had entrapped numerous prominent international architects since the 1970s. Dogmatic modernism had been summarily rejected, but where else to go?

Stirling, an iconoclastic pathfinder as ever, showed the way for those with originality and fresh talent.2 Others, such as Frank Gehry, Daniel Libeskind, Zaha Hadid and Piers Gough, followed in turn. The problem was that clients in Britain were, more often than not, just frightened off.

The exhibition, skilfully researched and orchestrated by Professor Anthony Vidler, demonstrates through models and numerous drawings, many of which are freehand conceptual ideograms, Stirling (and Michael Wilford) working as a virtuoso team, always enriching projects with concepts and precedent ideas often taken from history (as Colin Rowe had encouraged). Stirling would then subvert the conventional usage there, introducing new combinations, like a prospecting musical composer of the earlier 20th century, always with the benefit of surprise. No other practitioner dared so far to win, in the specious alleyways of late 20th-century critical discourse. But Stirling did win, with the perceptive recognition of this emergent genius by key arbiters of the time such as Kenneth Frampton and Robert Maxwell, mid-Atlantic seers still today, and enlightened institutions and sponsorship.

What the exhibition reveals is a penchant for drawing as a key means of expression, from the iconic Leicester University engineering building (1959–63), the Cambridge University History Faculty and Library which followed (1964–67) and the St Andrews University Melville Hall student residences (1964–68): drawing as a means of working out ideas – not simply in a process of enhancement – but of setting up oppositions, between possible solutions, steps towards the final version. This process was aided by Stirling’s own tendency towards self-quotation and re-quotation, essentially a literary kind of exercise. God was not in the details, as one great master from the pre-war period (self-referentially) was quoted to have said, but humanity certainly was for Stirling paramount. And in all three of the above earlier projects as built, Stirling and Wilford were pushing the frontiers of building technology, perhaps too often ahead of that in this country. St Andrews, Scotland was an innovative masterpiece of prefabricated concrete panel design (chosen because local brick building technology lagged behind): as a result the full scheme of eight “fingers” of accommodation was soundly costed with full benefits of scale but became inevitably uneconomic when reduced to just two by “economical” cost-cutting. The original Stirling proposal would have provided the university with all necessary room for student expansion for some decades to come, in a superbly appropriate landscape context. But it was not to be.

There was always in Britain the failure of client vision, of nerve about the future, of which Stirling and Wilford were so readily aware. Such concerns by institutional clients also led later to committee and academic board threats for demolition, as earlier with the Cambridge University History Faculty and Library (Stirling and Gowan commissioned design 1963/James Stirling 1963–67) and the Florey Building for Queens College Oxford (1965–70), each threatened in the decades that followed. Similarly now at Harvard University, unfortunately at this very moment, no respect is shown for Stirling’s pivotal work, the leaders there having proposed that the Arthur M. Sackler Museum (with its prized holdings of Oriental, Islamic and Classical Art) move out of its purpose-built and much praised building to another site, with an unknown fate as yet for the now historic Stirling building itself.3 Thus is now seemingly betrayed both the wholesome commitment by Dr Arthur M. Sackler to the architecture itself but also to the collections it was designed to accommodate and to display to maximum advantage, as a teaching museum.

As the exhibition shows, the manner in which Stirling drew out the various alternative solutions for all his projects, and the later presentation of the same by axonometric projection reveals the inherent quest for formal and technical accuracy never offered by the traditional perspectives so beloved of clients. Stirling established a revolution in presentation only previously found in the work of the Russian Constructivists. It goes without saying that this is an exhibition primarily for architects, especially those who can read the scores. But it can also help the greater public understanding.

In addition to Vidler’s exemplary catalogue, architect Alan Berman has produced almost simultaneously The Red Trilogy4, which sets out the realities and the poetry of the three English pioneering buildings of the 1960s. This at last clarifies all aspects of these three formative buildings. There has been a need for such full documentation. James Gowan was partner to the Leicester building, and Michael Wilford played an increasingly important role in all three as the practice developed. Berman also invited some 24 architects, many of whom had cut their teeth in Stirling’s office and many of whom now enjoy success in their own right, so to reminisce. This has proved a valuable exercise and contribution to Stirling documentation, which the Archive itself of course cannot offer.

The exhibition, and both volumes, will clarify to a once sceptical but increasingly interested lay public, the essence of a great architectural voyage, which places Stirling on a pinnacle of genius amongst his peers. A symposium will take place on James Stirling at Tate Britain on Saturday 11 June, and so the further discourse on the architect will now continue to run, in a timely way (in mind of the Postmodernism Exhibition to be mounted at the Victoria and Albert Museum later this year, which Studio International will review in due course – Postmodernism: Style and Subversion, 24 September 2011–15 Jan 2012). Stirling always had refused the epithet “Postmodernist” in architecture, which can further fire the ensuing debate.