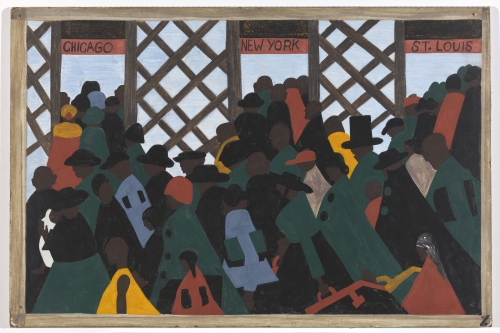 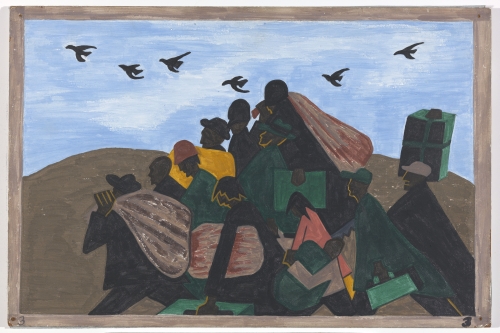 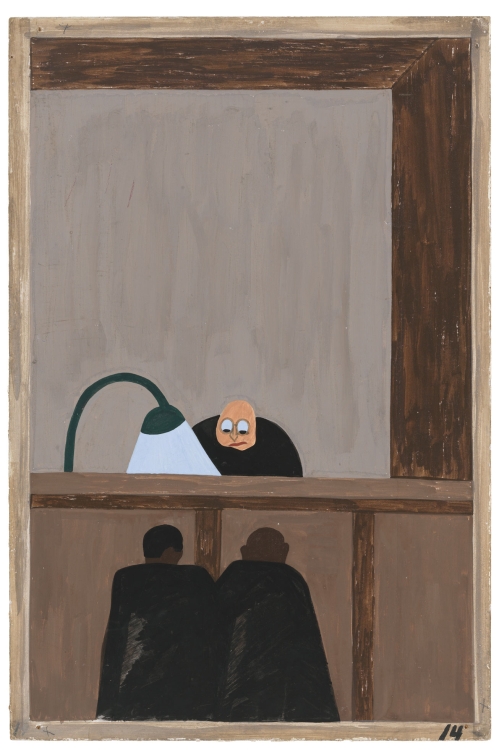 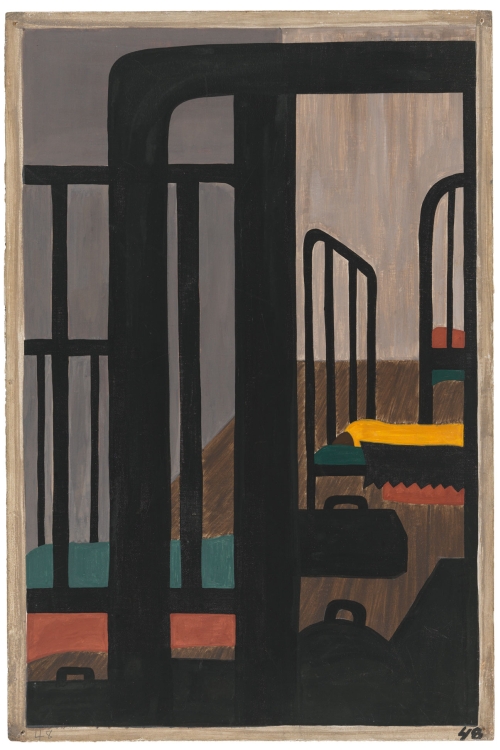 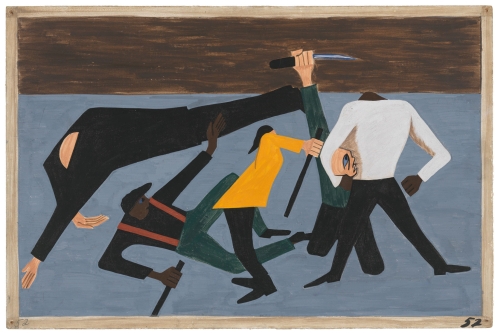 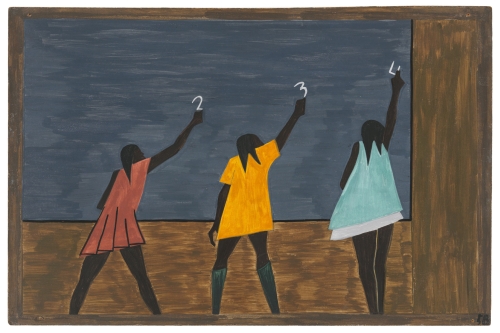 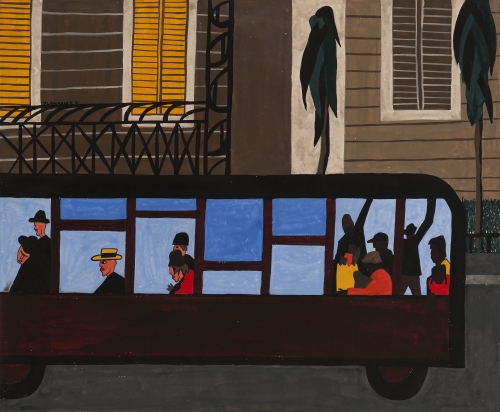 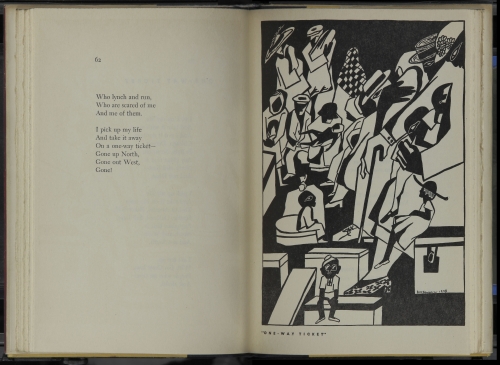 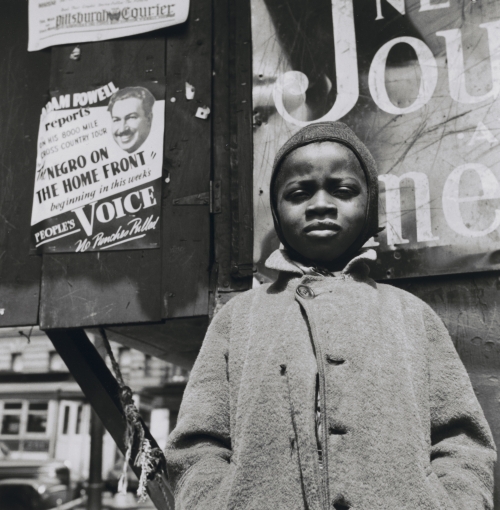 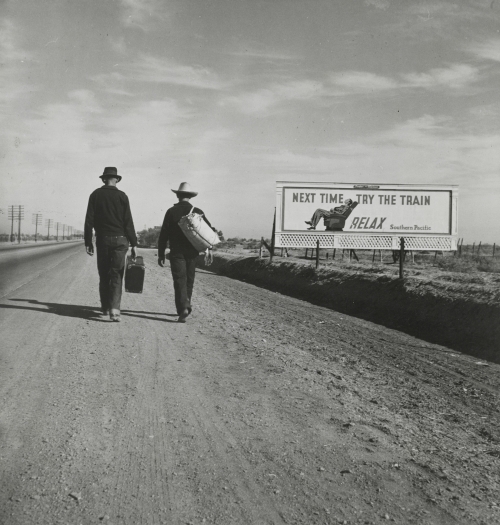 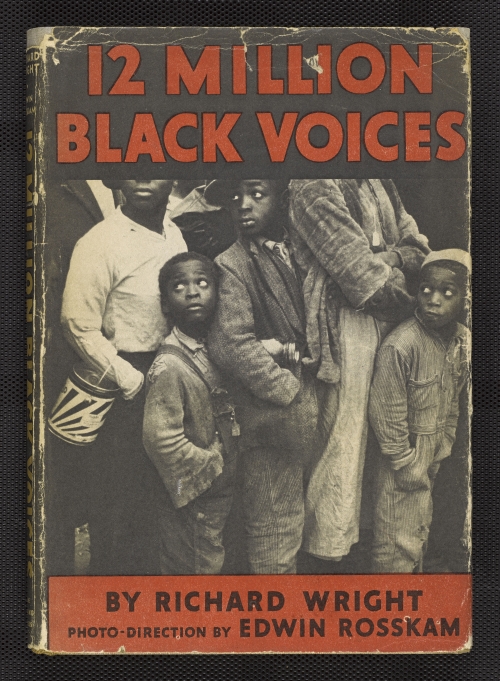 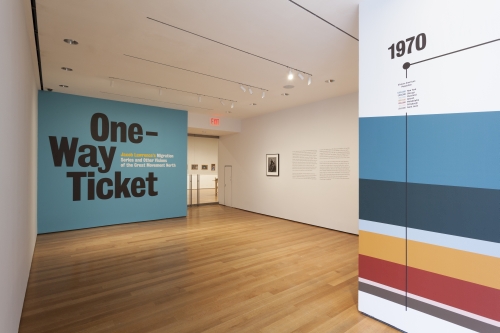 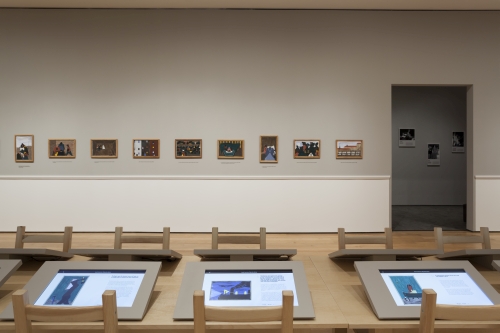 The artist’s 60-part work, based on the Great Migration of black people from the south to the north of the US from 1915, is shown here in its entirety. Shifting between the personal and the monumental, it tells the story of the thousands who left their homes in search of a brighter future

In 1910, close to 90% of the black population in the United States lived in the south. By 1970, almost half had departed for cities in the north, including New York, Chicago, Cleveland, Detroit, Philadelphia, Pittsburgh and St Louis. Known as the Great Migration, this multidecade movement of people started around 1915, abated for a brief period when the job market tightened after the 1929 stock market crash, only to increase again in the years during and after the second world war. Millions of people left their homes, hoping to capitalise on job opportunities in the north and to flee the racial discrimination that was supported by Jim Crow laws. This mass demographic shift transformed every aspect of American society and culture.

Artist Jacob Lawrence (1917-2000) began painting his Migration Series in 1939, when he was only 21 years old. At the Museum of Modern Art, the work is shown in its entirety, accompanied by a number of related pieces by Lawrence and his contemporaries in the visual arts, music and literature. Bringing together this diverse range of media allows us to get a sense of the vibrant community Lawrence was a part of and, more importantly, to understand how he drew on these different art forms and transformed the models for representing black experience in the US.

Though Lawrence was born in Atlantic City, New Jersey, his parents had left Virginia and South Carolina during the early years of the migration. The narrative Lawrence constructs based on this pivotal historical movement draws much of its poignancy from the way it shifts between the personal and the monumental: the story of thousands is knowingly conveyed as being based on the choices of individual families and communities, who each independently left their homes in search of a brighter future.

When he was 13, Lawrence moved with his sister from Philadelphia to join his mother, who had separated from his father and was then living in New York City. The family settled in Harlem, and Lawrence came of age during the height of that neighbourhood’s renaissance. In interviews (two of which are available on MoMA’s excellent exhibition page, along with interviews conducted by the show’s curator Leah Dickerman with scholars, artists, musicians, and others), he recalls how he benefited from the wealth of afterschool programmes he attended, first at the Utopia Children’s House, where he met artist Charles Alston, and later at the Harlem Art Workshop, an arts education project rum by Ernestine Rose at the 135th Street branch of the New York Public Library (now the Schomburg Center for Research in Black Culture). Growing up in this community, Lawrence explained, inspired him to continue to explore and record African American history, much of which had been imparted to him through oral traditions. He saw his work not as a form of social protest, but as serving an educational purpose.

Lawrence began his making history paintings in 1937, turning to the subject of Toussaint L’Ouverture, leader of the 18th-century Haitian Revolution, which set the stage for Haiti’s enslaved Africans to establish the world’s first independent black republic. He then began work on a series devoted to Harriet Tubman, the famed conductor on the Underground Railway. By turning to the academic tradition of history painting, Lawrence gave the stories he painted a sense of pathos.

In 1939, Lawrence started research on a project that focused on recent history: the Great Migration. He spent six months in the library before he turned to the canvas, sifting through historical accounts, photographs, and newspaper and magazines articles. The resulting 60-panel series is told through both word and image: each canvas is accompanied by a short caption, a style of storytelling Lawrence adapted from photo-essays. While a narrative impulse drives the series, it is not linear, there are different strands and pregnant gaps or ellipses are left between the scenes.

Lawrence conceived the Migration Series as a single work composed of 60 parts (he even stipulated that the panels should all be sold together, although they were eventually divided between the Museum of Modern Art, New York, and the Phillips Collection, Washington DC, in 1942). He began by writing the captions, which were then edited by his wife Gwendolyn Knight, and then proceed to prepare all the panels with gesso and laid in the composition. As a young artist working on a limited budget, he chose inexpensive materials: pencil, ink, tempera and hardboard. Thanks to an artist’s grant, he was able to rent a studio large enough to let him view and work on all 60 paintings simultaneously. To ensure the formal cohesion of the project, Lawrence began with the darkest colours and applied them to each canvas before progressing to the next pigment. Working in this way allowed him to maintain the visual and spiritual unity of the project, and the clear repetition of colour across the panels creates a sense of movement and rhythm.

The style of the figures and interest in contemporary social issues are clearly inspired by the work of the Mexican muralists, but the scale of Lawrence’s work is much more intimate: the size of the panels themselves match the format of a large magazine such as Fortuneor Life. In many of the scenes, we see people reading newspapers or letters, and in these everyday moments, Lawrence captures individuals in the process of making a life-changing decision. We seem the grim reality of life in the south, the state-sanctioned violence, the fear of lynching, and the plight of the tenant farmer. Yet the choice to move north is never presented as a foregone conclusion. There is opportunity and greater freedom (even the right to vote), but Lawrence is critical of the social condition in the region he himself calls home. He draws attention to the segregation between whites and blacks, as well as the established black community’s reluctance to welcome new arrivals. He is critical observer of history, recording and questioning at the same time.