Ensor’s star has remained dim in the UK. This small exhibition of his works, selected by fellow Belgian and lifelong admirer Tuymans, establishes Ensor as a major figure of his era 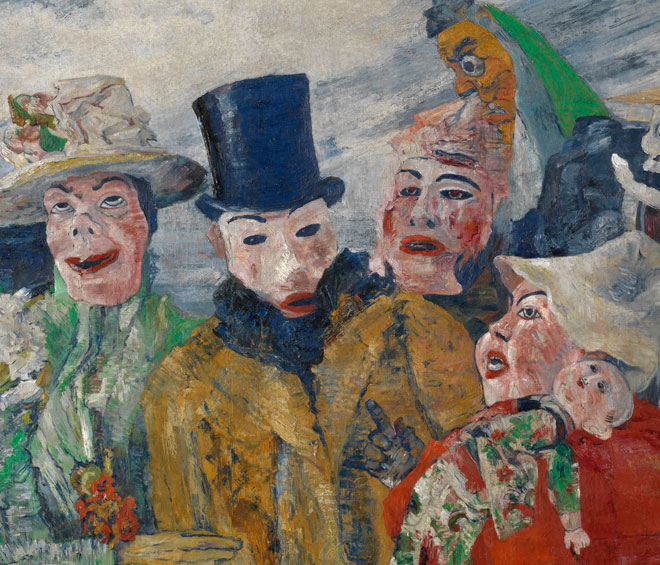 A well-heeled couple promenade against an open coastal sky. Around them clusters a crowd of jostling grotesques: one consumptive-faced, another massive-mawed, a further one clutching a silk-clad doll like a child. Lurking in the corner stands Death itself. But this is not an assault; indeed, the woman seems delighted. And the couple are also masked, themselves part of some macabre celebration.

This is The Intrigue (1890), the titular work in the Royal Academy’s new exhibition of the great Belgian painter James Ensor (1860-1949). The ghastly figures are not demons, but rather revellers at a carnival – perhaps Mardi Gras, on which the assumption of masks traditionally allowed unmarried pairs to socialise. Nevertheless, there is something unnerving about this painting. As with the demons in Ensor’s Netherlandish predecessor Hieronymus Bosch, Ensor’s unsightly revellers leer out of the canvas in a discordant cacophony. Standing before the canvas, you can almost hear them.

The exhibition is curated by another Belgian, Luc Tuymans, one of the most respected contemporary painters. Tuymans (b1958) first laid eyes on Ensor’s work as a teenager, at Antwerp’s Royal Museum of Fine Arts. He was immediately captivated. So began a lifelong obsession. For Intrigue, he has selected 66 works. It marks the first show in the UK devoted to Ensor in about two decades. Although Ensor’s reputation is assured in continental Europe, his star in Britain has remained dim, possibly because of his lack of representation in public collections. This may be compounded by the common perception of Ensor as a precursor to German expressionism, which is similarly sparsely displayed in the country. Drafting in Tuymans seems a wise move in redressing the balance.

Although Intrigue is not arranged chronologically, it does begin by tracing Ensor’s development. His earliest works here mark him out as an exceptional painter of unexceptional subject manner. The Bourgeois Salon (1880) does exactly what the name would suggest, laying out an unremarkable room in an impressionistic gaze. This salon is not brightened by morning light, however, but rather cast in a sickly, arsenical pallor. By the time of Self-Portrait with Flowered Hat (1883), Ensor has pushed closer to an individual style. The feathery-light brushwork of the late-19th century matches the solemn depth of baroque portraiture; the plumed hat was added later as homage to Rubens.

In Skeletons Fighting Over a Pickled Herring (1891), two jagged-jawed skeletons tug and tussle over a sliver of fish. Generally interpreted as a pair of critics clamping down on a helpless Ensor, their military uniforms suggest both an outdated fustiness and the presence of some long-forgotten political barb. The dynamic brushwork, so thinly dashed on that you can perceive the blank canvas below, appears to indicate that the painting was created extempore, without a preparatory sketch below. In this tiny painting, one can catch many of the hallmarks of Ensor’s mature style. There is his fixation with the macabre, on uniforms and masks, and on the sea-facing lives of Ostend, where he spent the whole of his professional life. There is a penchant for satire and caricature. And there is the mastery of a distinct, light-drenched painting style, which shimmers with a soft oceanic light.

The first of these three strands – his distinct subject matter – has been well charted. Ensor’s mother ran a curiosity shop for Ostend’s tourists, and, consequently, the artist grew up around dolls and carnival masks, seashells and chinoiserie. This sense of an unexplainable world existing in juxtaposition with the mundane persisted throughout his life. The Skeleton Painter (1896), based on a photographic portrait of Ensor himself, shows his studio as littered with masks and skulls, as well as many of his earlier masterworks. As tempting as it might be to interpret this as some sort of Edvard Munch-like expression of the tortured artist, the skeletal Ensor is calmly painting away.

A more likely element to Ensor’s fixation is offered by the Biblical vanitas, the notion that earthly life is fruitless. The vanitas was a common genre of baroque Netherlandish still life, depicting objects such as skulls that suggested the transience of terrestrial existence. In Pieter Bruegel the Elder’s The Triumph of Death (c1562), an army of skeletons decimates human society in a bracingly violent expression of memento mori. Ensor’s skeletons and skulls might well be a modern echo of these precedents. Paired with his focus on carnivals and revels, they evoke a sort of enlivening dance macabre: we are heading towards death, so why not have fun on the way?

As well as being a painter, Ensor was a commanding draughtsman and printmaker, and it is in his works on paper that his satirical brio emerges in full. Ensor’s father was English, and it is tempting to place some of his more sketch-like work – such as the copper-plate etching of The Bad Doctors (1895) – in the lineage of George Cruikshank and James Gillray. But Ensor is less politically pointed than these predecessors, his broader social sweep more reminiscent of William Hogarth and Honoré Daumier. The extraordinary pencil and oil panel The Baths at Ostend (1890) depicts all manner of maritime licentiousness in a tableau that seethes with life. At times, such as the study for the large-scale The Entry of Christ into Brussels (1895), it can be difficult to tell where jollity ends and barbs begin. Christ is flanked by a mob and surrounded by advertising paraphernalia, but does this amount to a broadside against commercialism and revolutionary protests, or simply an acknowledgement of it?

In Adam and Eve Expelled From Paradise (1887), two panic-stricken, blurred figures flee across a blasted heath, as an angel seemingly composed of sunlight drives them out with searing rays. It is an uncharacteristically violent portrayal of an event usually depicted as a moment of inconsolable remorse rather than blind terror, cynically figuring humans as akin to herbivores fearing a predator. It is also an astonishing showcase for Ensor’s use of colour. The sky, which possesses all the prismatic wonder of a late JMW Turner seascape, has a billowing texture that suggests something incommensurably richer than the thin air outside paradise. Theatre of Masks (1889) brings this approach to what might be called more characteristic Ensor subject matter, conjuring up an interior space in a riot of fuzzy light. The theatre becomes a mirage.

Some of Tuymans’s decisions grate. A pair of paintings by the younger Ostend artist Léon Spilliaert is included as a svelte, shadowy counterpart to Ensor’s exuberance; though a potentially fruitful comparison, it is one that requires a more dedicated interrogation. The same cannot be said of James Ensor in Ostend c1920 (2000), a film by the contemporary Belgian artist Guillaume Bijl. Bijl’s film, which masquerades as crackly footage of Ensor walking along the promenade and beach, deflates Ensor’s depths by depicting him as a parochial old man. Intrigue is a small exhibition of a major artist whose obscurity in Britain deserves to be remedied, so time spent away from its ostensible subject feels wasted. You can forgive Tuymans for including his portrait Gilles de Binche (2004) here, but despite the fitting subject matter – the Gilles are a group of orange-throwing clowns who appear during the annual carnival in the Wallonian town of Binche – its ethereal vagueness feels rather flimsy compared with Ensor’s (sans-)flesh and blood marvels.

Nonetheless, it is hard to argue with Tuymans’s choice of Ensor works, which succeed in presenting the subject artist in his broadest possible range, showing the large-scale with the small, the major work with the seemingly minor. Here, Ensor is not merely a precursor to expressionism, but a major figure in his own right. After Intrigue, this status should finally be assured on his side of the Channel, and for this Tuymans and the RA deserve abundant praise. 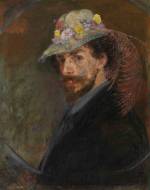