Visual Wit and Social Critique. Satire from Goya to Grosz

Visual Wit and Social Critique. Satire from Goya to Grosz

With three centuries’ worth of satire, this exhibition offers an overview of things that have changed and, perhaps more engagingly, things that have not, through an artist’s eye view of society 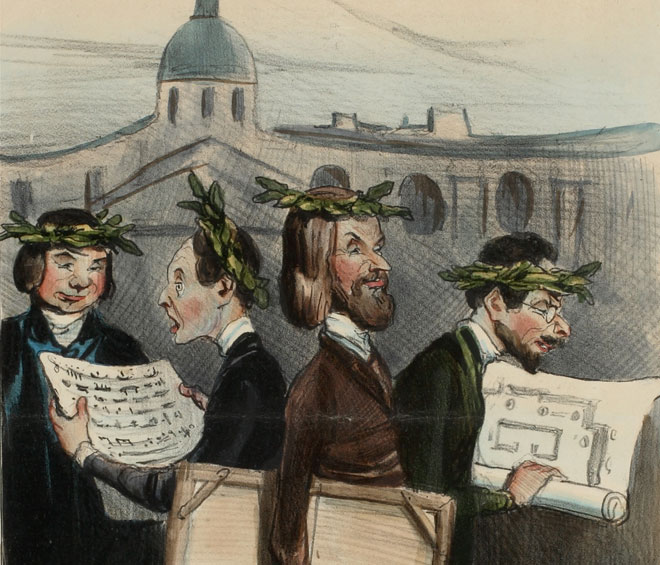 Following the Charlie Hebdo massacre in January 2015, in which 12 people died when the satirical magazine’s office in Paris was attacked by terrorists, and, most recently, the killing of Nahed Hattar, outside a court in Amman where he was being tried for sharing an Isis-themed cartoon on Facebook, the subject of satire as a means of artistic expression is more salient than ever. These events have raised the question of just how far an artist ought to be allowed to go in his exaggeration and mockery of others, as a means of reflecting and questioning – and sometimes even working through – controversial issues of the time.

The artist deservingly most exhibited is Daumier, whose adoption of the newly developed lithographic technique allowed for more speed and mass distribution. During his lifetime, he produced about 4,000 lithographs, 600 drawings and watercolours and 300 paintings. An eight-minute film, Man of his Time (1985), brings together a number of these works as a very successful, informative and entertaining moving image overview of his life and times in Paris, including the French Revolution, the struggle for a republic, the development of the bourgeoisie – a group that never failed to amuse the artist – and new inventions such as the train, which he claimed was “shrinking Europe”. Daumier sold his first drawings to Paris newspapers at the age of 14 and his success, thanks to his outrageous criticisms of the king, brought him confidence. In 1832, however, he was charged with slander for his satirical representations of King Louis-Philippe, and sentenced to six months in prison, two of which he spent in the state prison and four in a mental hospital. Nevertheless, after his release, Daumier continued to criticise the rich and mighty as vociferously as ever, albeit through the creation of fictional characters.

Grosz, too, was punished for his wit. He was heavily fined for “insulting the army” and “offending public morality”. During the Nazi regime, criticism of the political elite risked both persecution and a ban from working. Nevertheless, German artists took their chances and continued to speak out. Works by Dix and Albin Egger-Lienz (1868-1926) reflect, in turn, the horrors and atrocities of the first world war, and the latter’s Soldier & Death (no date) – very like a Käthe Kollwitz piece – haunts with its hollow, featureless face: shadowy, ghostly and ghastly. Dix, on the other hand, produced a series of 50 etchings, aquatint and drypoints (The War, 1924), from which four etchings are on display, capturing feelings of horror, fear, violence, death, hatred, ugliness and monstrosity. His work shows how satire can be used not only to poke fun at banalities and social differences, but also to help make something horrific and overwhelming somehow palatable – as a means of processing or coming to terms with things.

On a more banal level, Searle’s colour etching, Study For An Urban Project (1972), is an “Hommage à Mickey Mouse” and depicts a decrepit, old, crippled, wrinkled, beer-bellied, whiskered Mickey, placed on a plinth in a city square, marked: “Born 19 Sept 1928.” For his ridiculing of the human tendency to glorify the banal, Searle was described by the Swiss writer and painter Friedrich Dürrenmatt as “Jonathan Swift with an artist’s pen”.

The most recent work in the exhibition is a site-specific installation by the Romanian artist Dan Perjovschi (b1961, Sibiu), similarly picking up on common banalities in contemporary society. In a David Shrigley-esque manner, he has painted words, comments and pictures on the walls throughout the museum foyer and main hall, with statements such as “from Big Bang to Big Mac” and queries including “Middle Class Have Middle Dreams?”

Goya is represented by his Los Disparates series (also known as Los Proverbios, 1815-23), which some art historians believe represents Spanish proverbs, but, given the individual titles of the works, handwritten by the artist on the prints, seems more likely to refer to the famous satire The Praise of Folly (1509), by the Dutch scholar Erasmus of Rotterdam (c1466-1536) – a text in which the personification of folly mocks humanity’s foolishness and vices. Goya’s draughtsmanship is simply fantastic, creating grotesque and horrific imagery with tortured expressions and an almost painterly appearance. Hogarth, on the other hand – whose works A Harlot’s Progress (1732) and its masculine counterpart, A Rake’s Progress (1735), as well as the later Marriage-à-la-Mode (1745) are on display – seems far more illustrative, in comparison, but nevertheless captures some equally horrified expressions. His portfolio of six engravings comprising the Marriage-à-la-Mode series pokes a moralising finger at the upper echelons of society, while, in the same section of the exhibition, 14 works by Daumier laugh at the “joys” of marriage and paternity. In a similar frame, Daumier’s Les bas-bleus (The Bluestockings) (1844) mocks the independent-minded woman, who neglected home and children. The name derives from a woman who attended a London salon in the mid-18th century wearing blue stockings instead of black, and became a term used to insult women who were no longer content with their expected role in society.

Caricatures about the work of artists and art critics have been found in European satirical magazines since around 1830. Daumier’s Les illusions d’artistes (1842) mocks the established Salon, while 88 years later, Karl Rössing’s Raffael and the Bauhaus Disciples (1930) – from a portfolio of 100 woodcuts called My Prejudice Against This Time (published in 1932 in Berlin) – pokes at the same wound. The Exhibition Reviewer (1931), from the same portfolio, is seen on rollerskates, speeding past the works on show with his notebook, while Carry Hauser’s The Art Critic (1920), hanging next door, is seen to be scribbling away, his arm thrust through several canvases – clearly nothing has changed in the respect (or lack thereof) attributed to those of us who in turn comment on the work of artists – we are popular targets of ridicule, also repeatedly shown to be bewildered by the innovations in avant-garde art.

There is much to be seen and ingested in this rich and impressive exhibition and even the earliest work still resonates in today’s socio-political climate. Take your time to look around, read the small print, and expect to laugh out loud on more than one occasion. 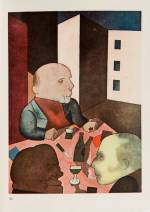 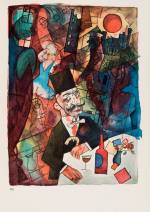 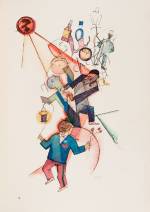 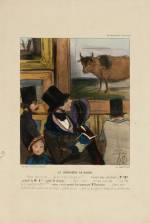 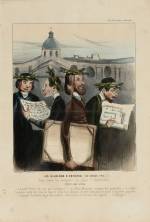 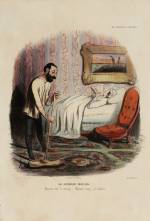 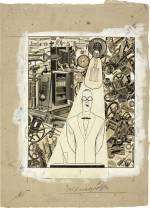 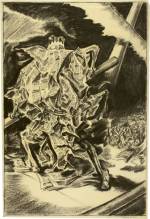 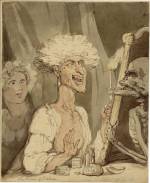