The annual art fair, which this year celebrated it’s 50th anniversary, impressed with its congenial atmosphere, international purview and keenness on curation 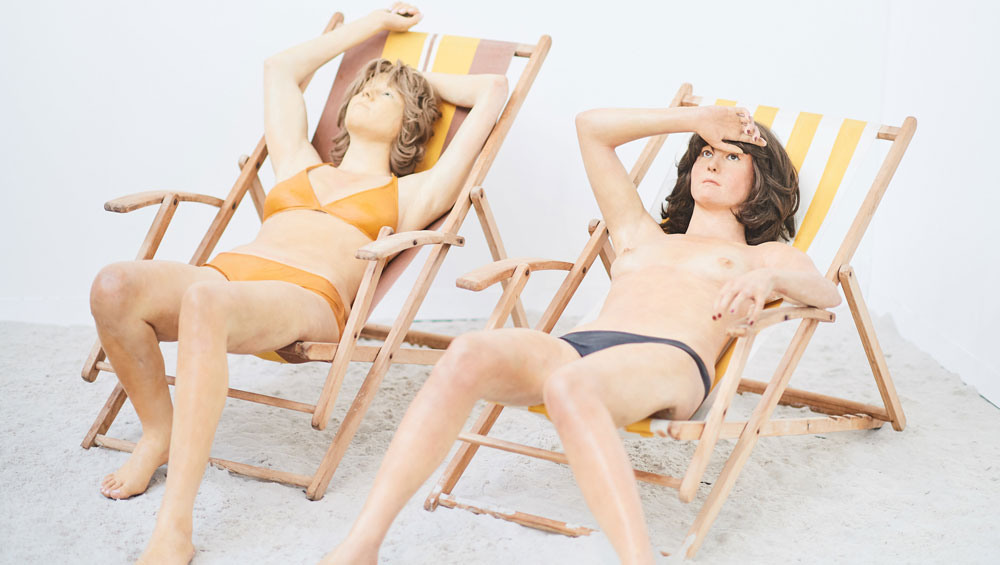 Brussels is one of Europe’s most constantly surprising capitals, a place where architectural styles clash and intermingle on every street. Expansive boulevards give way to rambling hillside villages, and lively multi-ethnic communities fringe even the luxury fashion strip of the Avenue Louise. It is thrillingly eclectic. This is reflected in its art scene, whose galleries occupy former banks, townhouses, shops, warehouses and breweries. The city’s relatively low rents and diverse populace – over three in 10 residents are not of Belgian origin  — gives its practitioners an international vein. And the country’s proclivity for collecting, which has not yet in Belgium become the sole domain of the ultra-rich, provides distinct advantages for early and mid-career galleries and artists who might find it difficult to sustain their practice in a pricier metropolis. 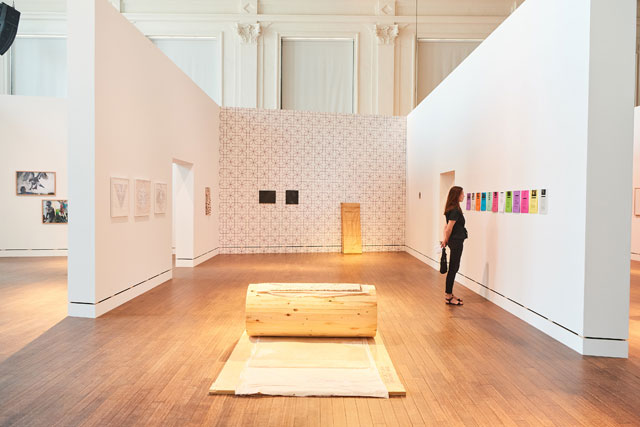 Art Brussels, the annual fair that this year celebrated its 50th edition, captures something of its city’s heterogeneity. It featured almost 150 galleries from more than 30 countries. Almost every medium of art was represented, from video and performance to calligraphy and ceramics. Hosted in Tour & Taxis, an enormous redbrick industrial complex on the north-west edge of the city proper, it boasts an immediate advantage over the familiar deadening Messes and sticky marquees used elsewhere. Collectors, gallerists and more than a few artists took the preview day at a convivial pace. There was none of the Walmart-for-art tumult characteristic of the largest fairs. 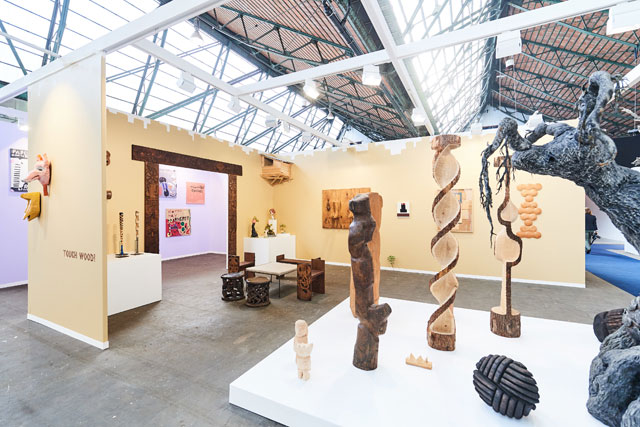 Part of this is down to the absence, by and large, of world-bestriding super galleries, which can treat fairs as a luxury yard sale. A lot of exhibitors here had a very clear presentation of one or two artists, and neatly unified their booths to avoid overstuffing. Sorry We’re Closed – a Brussels gallery whose courtyard space in town has a pleasingly laid-back, early-2000s Berlin vibe – devoted its booth, Touch Wood!, to artworks in timber. Although Paris and New York’s Galerie Lelong presented a bevy of 11 artists, including Kiki Smith’s avian sculptures and David Nash’s rune-like charcoal drawings, each was given an apse in which to thrive. 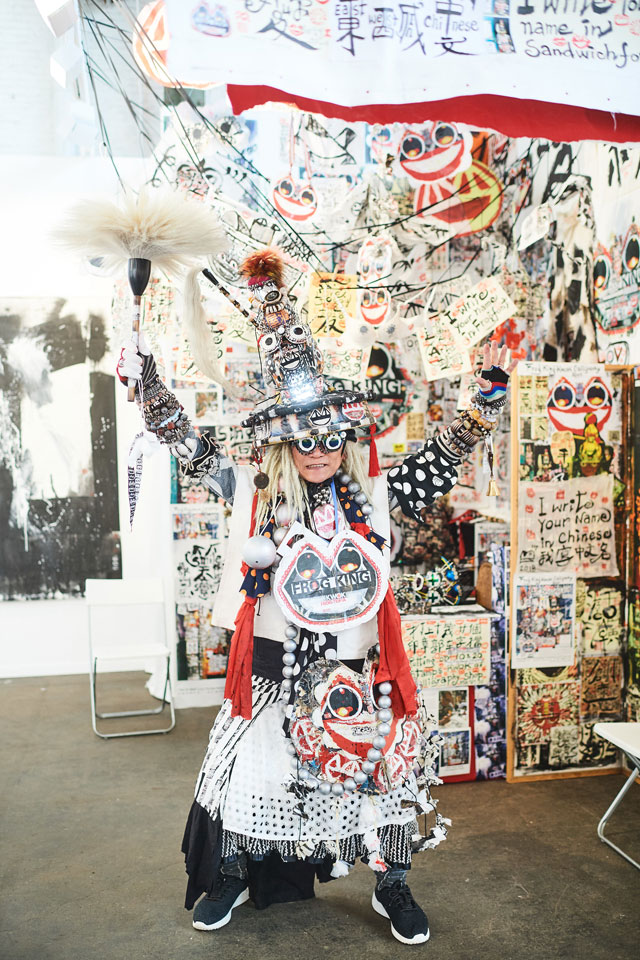 The preponderance of smart curation was best demonstrated by the fair’s Solo selection, dotted around the main hall, of individual artist displays. La Patinoire Royale/Galerie Valerie Bach devoted its space to an Alice Anderson performance involving the weaving of copper wire around a grove of tree trunks, while Hong Kong-based 10 Chancery Lane Gallery had live calligraphy demonstrations by the legendary Kwok Mang Ho – known by the moniker Frog King – whose totemic outfit and flag-bedecked installation was recreated from a 1992 appearance at the New Museum. Over at Cologne-based Choi&Lager’s stand, meanwhile, Daniel Firman presented arresting bronzes of people scrambled together as if in a computer glitch, while at Martos Gallery Alex Chaves repainted Picasso’s Guernica in soft, beach-ready colours. 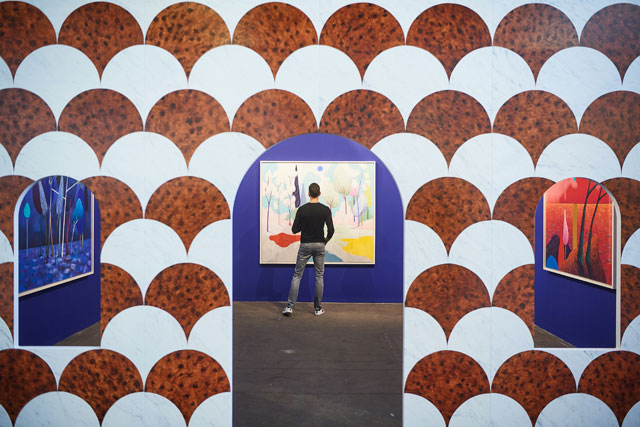 Perhaps the most prepossessing of these displays was that by Antwerp’s Geukens & De Vil Contemporary Art, which transposed the sculptor Sofie Muller’s studio, wine-stained sinks and all. A cabinet containing dozens of her alabaster sculptures proved a sinister highlight, as did her busts appended to the wall. Swiss artist Nicolas Party, who won the prize for best Solo presentation, impressed with his marbled wall for local gallery Xavier Hufkens, which turned the booth into an enclosed installation, part-chapel, part-summer house. Within were three paintings of seductive fantastical landscapes, botany beamed from another planet. 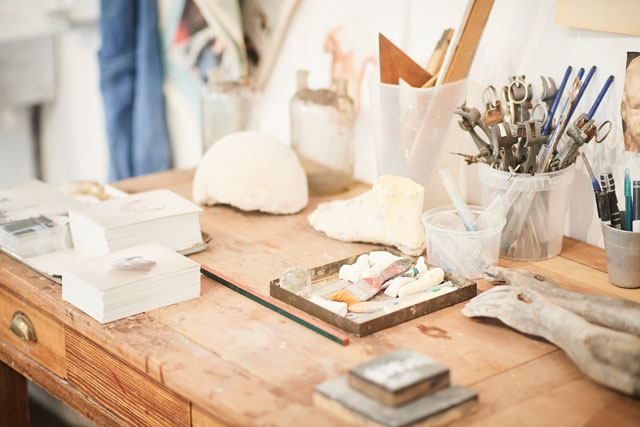 There were also notable highlights in the Discovery section, devoted to generally smaller galleries showing work produced since 2015. Przemek Pyszczek caught the eye with his vivid sculptures and canvases, which draw on Poland’s propensity for recolouring the drab apartment blocks of the later communist years. Placed above an electric-blue carpet at the booth of Paris’s Galerie Derouillon, Pyszczek’s pieces parody and redeem the over-designed uselessness characteristic of eastern bloc estate playgrounds. Nearby, the Hague-based gallery Dürst Britt & Mayhew presented Dutch artist’s Lennart Lahuis’ playful take on Brexit: an enormous clay tablet inscribed with an article from Nature magazine describing the British Isles’ separation from the mainland continent in a tsunami 8,000 years ago. The piece was covered with water throughout the fair, eventually rendering the text unreadable. More serene pleasures were to be had at Budapest’s Ani Molnár Gallery, whose display of Brazilian artist Sári Ember’s ceramic masks and vessels, photographs and exquisite paper collages played around with way simple apertures, cones and ellipses can be arranged to create intimations of humanity. 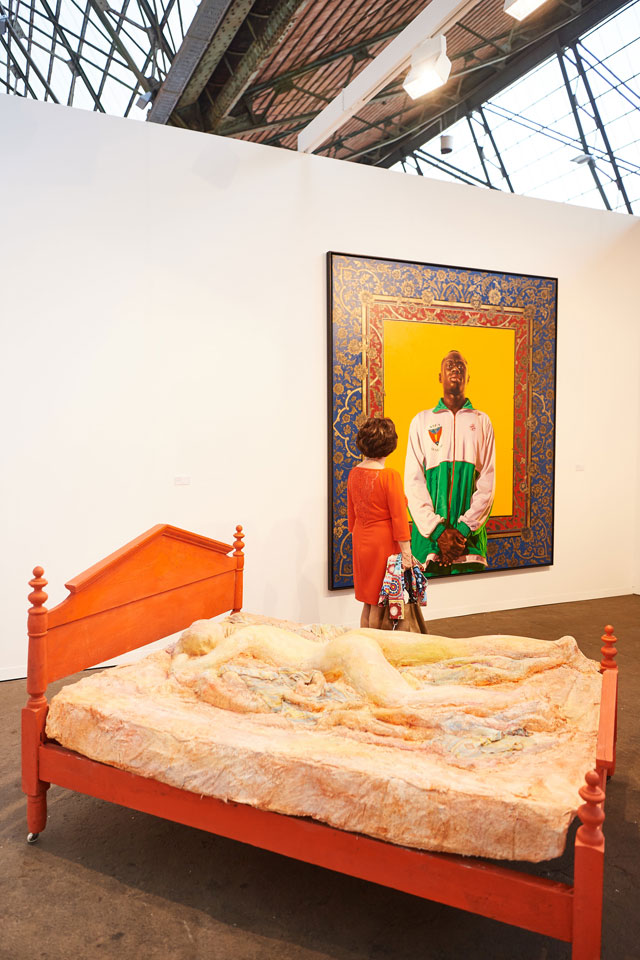 Another reason for the fair’s distinction is its trove of public projects. Outside, there were nine large-scale sculptures, while within, courtesy of the Fédération Wallonie-Bruxelles, a showing of Pierre Jean Giloux’s eerie films around Japanese metabolic architecture. The heftiest non-commercial strand was Mystic Properties, curated by Elena Sorokina. Taking its lead from the various thefts and transferals of ownership that have befallen the Van Eyck altarpiece in Ghent, it sported around with ideas of possession and power in the art world: a bold choice, it might seem, for an art fair. But Sorokina’s choices favoured tales of the literary and the art historical over the commercial. 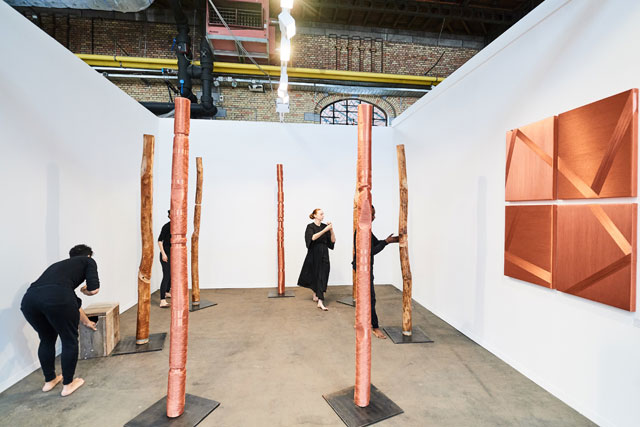 Ante Timmermans’ )pause( (2014), for instance, saw him take Samuel Beckett’s Waiting for Godot and rewrite the play as only its stage directions, while for The Host’s Journey (2018), Heide Hinrichs translated Korean-American artist Theresa Hak Kyung Cha’s notoriously untranslatable book Dictée into German, claiming the new version as her own possession. Lighter and more amusing were Wesley Meuris’s 2012 series of surpassingly generic flyers for fictional museums, which play on those institutions’ attempts to order history, geography and artwork into their own narratives. And in Epiphany. Mise-en-scène (2016), Almudena Lobera provided a tantalising joke: a wrapped-up panel the exact size of the one stolen in 1934 from the Van Eyck altarpiece, whose contents are to be revealed only when the original is finally relocated. 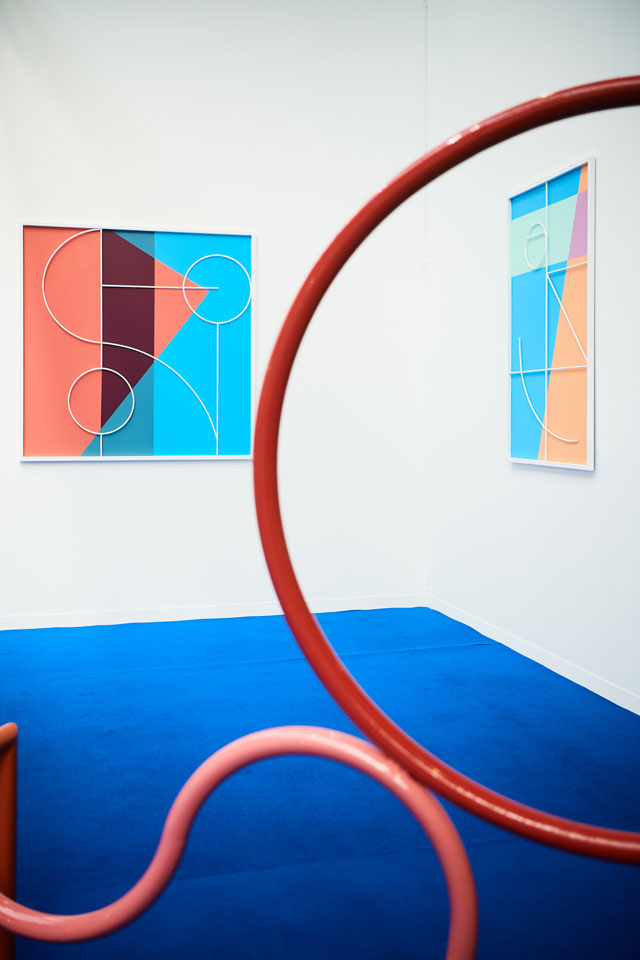 The other larger exhibition, Women from the Belfius Collection, amassed by a financial services company now owned by the Belgian state, blindsided a little with its title. Although it contained pieces by a handful of the country’s leading female artists – including a terrifying sculpture by Berlinde de Bruyckere, and fine works by Lili Dujourie and Anne-Mie van Kerckhoven – the majority on display was the work of men, and not a little objectifying. An uncharacteristically sunlit work by the often-funereal Paul Delvaux, for instance, showed a suited man walking through a classical paradise of largely female nudes, arranged as if for his pleasure. The phantasmagorical visions of James Ensor and the humane portraiture of Michaël Borremans were welcome marvels, but the relative paucity of female perspectives made it feel a missed opportunity. 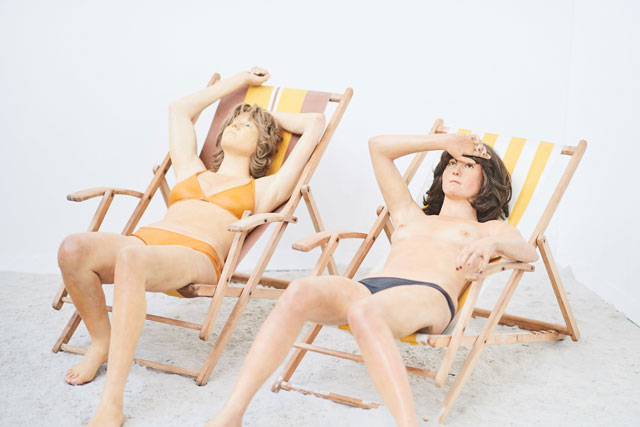 This misstep aside, Art Brussels has a lot to teach its brethren. Even during the soporific heat of the mid-April scorch – when one might be tempted to make like Jacques Verduyn’s sunbathing mannequins at Galerie Antoine Laurentin’s 60s and 70s-focused stand – the fair felt spirited and relaxed. Unafraid to present the cerebral rather than the headline-grabbing, and the young or obscure rather than the banner name, it charmed where others fairs bewilder. And, unlike most competitors, it maintained a sense that art is itself first and commodity a distant second, something to be thankful for in today’s mercenary art world.