Michaël Borremans’ current exhibition at David Zwirner Gallery in London conjures a nightmarish world that is both sinister and strangely captivating. But there is more to this beautifully presented exhibition than the paintings themselves

The worlds that Belgian painter Michaël Borremans (b1963) creates are full of contradictions. More often than not the subjects of his paintings perform the impossible, or are themselves paradoxical. His figures are like strange mannequins or eerie automatons that inhabit environments both familiar and alien. “I never paint humans,” he explains. “I always paint depictions of humans.” Borremans is a diminutive figure with an impish twinkle in his eye and a wry smile. It is instantly clear that he likes to make mischief with paint, and toy with expectations.

We are never privy to what is happening in Borremans’ paintings and that is part of the joy. But much of what makes his work so captivating is the way he uses paint. Every figure is given the masterly treatment of a Manet or Velázquez, with buttery oils applied effortlessly to the canvas by a hand that understands the medium perfectly. Francisco Goya is also an inspiration. As a child, Borremans wanted to draw comic strips, but on seeing a painting by the Spanish master he was forced to reconsider everything. And it’s not difficult to see parallels, especially in his current exhibition in London.

Black Mould, named after a song by New Zealand indie rock band the Phoenix Foundation, starts on the ground floor of the David Zwirner Gallery with a series of small paintings, each one containing a black-robed figure wearing a hood shaped like a bishop’s hat, which extends over the face. These sinisterly attired individuals are apparently rehearsing a dance, each one striking a pose that often borders on the comical. It is as though these faceless clerics are preparing for a secret ritual or initiation ceremony. There is more than a little of the occult about them. Painted on the backs of book covers and recycled panels of wood, it is as though Borremans is gathering whatever he has at hand to document the drama unfurling in front of his eyes. Like characters from Goya’s The Witches and Old Women Albums, these figures are straight out of a nightmare.

These finely rendered paintings are strangely beautiful items. But what makes them come alive is the theatricality involved in the display, which draws us in to this macabre dance rehearsal. Each work appears magically backlit, as though the paint itself glows, casting perfect little squares of light on the floor. On closer inspection it becomes clear that every painting is spotlit in the darkened gallery space, with a separate light pointing to the floor to complete the illusion. The walls are painted a dark teal, recalling a grand, national gallery or stately home, rather than the usual white-walled high-street space. Borremans admits that presentation is very important. He is a perfectionist in every aspect of his work.

The largest work in the exhibition depicts a painting of curling autumnal leaves propped up against a wall behind a Christian ceramic figurine. Four robed characters stand before this display; two lift their robes, baring their naked bottoms to the viewer. In art history, such barefaced cheek can be a message to the audience. Gustav Klimt, for example, painted a similarly irreverent painting by way of sticking two fingers up at his critics. MaybeBorremans is doing the same, but, given his penchant for the surreal, there is every chance that this is an extension of his dark humour. One of the characters, after all, holds a severed hand. Furthermore, these individuals appear to have been miniaturised as their odd ritual takes place on a shiny tabletop, which only adds to the absurdity and confusion of the scene.

Things get stranger. In the last room, the faceless men are juggling flaming limbs and smearing blood on the walls. If we were in any doubt that these mysterious little people have malign intensions, we can now be sure. The final painting is a small panel of the now familiar figures encircling a badger who stands on its hind legs. Given the title, The Badger’s Song, it seems as though this creature, which holds something like a hymn sheet, could be leading the performance. This creature was actually Borreman’s assistant and companion in his studio and would obligingly hold the painter’s sandwiches and brushes. The badger is, of course, stuffed.

These paintings, Borremans says, “depict the dark side of humanity, but also they are just paint on a panel”. He is not trying to moralise or teach. Instead, he seems to delight in his ghastly visions and the paint he uses to realise them, much like Goya did. But, unlike Goya, who was a master of conveying suffering and fear in the faces of his subjects, Borremans’ humans are expressionless, like fleshy ghosts, or brainwashed captives; they are, in other words, shells of people. Perhaps this is why his robed dancers are faceless. They are, after all, far more animated than his other creations and therefore need to be rendered less human. Either way, this is a captivating exhibition. Few artists could successfully fill the ground floor of a gallery simply with repeated figures in slightly changing poses. But Borremans can, and has the confidence to, because each painting is a sinister little masterpiece in its own right. 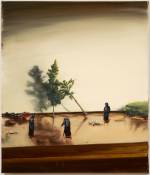 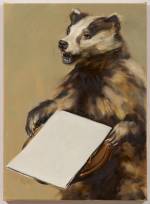 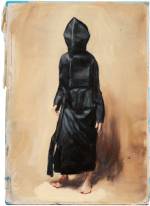 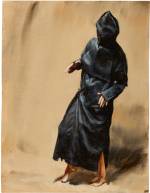 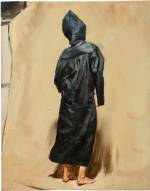 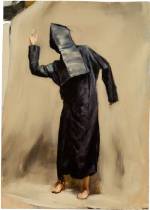 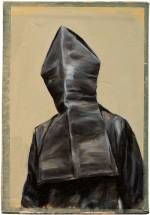