The Discovery of Spain. British Artists and Collectors: Goya to Picasso

The Discovery of Spain
British Artists and Collectors: Goya to Picasso

In The Discovery of Spain exhibition, the National Gallery of Scotland (NGS) has put together an aesthetic and culturally relevant experience. Drawn from collections all over Europe the exhibition charts the beginnings of British interest in the Iberian peninsula from the Spanish War of Independence at the start of the 19th century through to the fuller exploration of Spain's art and culture that was assimilated into parts of British art by the early part of the 20th century.

The exhibition focuses most specifically on British attempts to understand Spain and the influence of Spanish painters upon their British counterparts. The first room of the show focuses on a contrasting British and Spanish perspectives on the war of independence evoked by Goya and David Wilkie, an early adventurer in Spain. Wilkie successfully romanticises the war and creates myths from the madness. A specific example of this is his depiction of The Defence of Saragossa (1829) where we see Byron's Spanish maid in sweeping white, heroic robes – a serene image of valour astride a canon. This painting stands in direct conflict with Goya's interpretation of the same event, (1809–14) which is a dark and sinister etching, depicting the same maid shrouded in shadow atop the limp bodies of fallen soldiers. It is interesting and indicative of the kind of cultural misunderstanding inherent in such a project that Wilkie should draw charm and romanticism from the war while Goya interprets the events as much more horrific and sombre. Though a handful of British artists were painting in Spain around the same time as Goya, there is a considerable conceptual distance between the two camps. This is made quite clear when Sir Thomas Lawrence's John, Lord Mountstuart (1794) is compared to Goya's Portrait of Wellington (1812–14); the former romantic, dashing and noble and the latter heroic but with a candour in the eyes that betrays the soldier's war-weariness. Following the earlier depictions of war is the consequent British interest in the Spanish picturesque. The feeling here is very much Seamus Heaney's in the Night Drive: "the smells of ordinariness were new". British painters set about capturing a certain perspective of Spanish daily life that was considered exotic, sensuous and mysterious. Admittedly this was limited to the pageantry of Spanish peasants but it produced some of the charming paintings on show. The most accomplished painter of the Spanish picturesque is probably John Phillip who was also most financially dependent on the trade in Iberian inspired work. From his observational drawing of incidental Spanish townhouses and the stark light that hit them to his narrative paintings La Gloria (1864) and Spanish Boys playing at Bullfighting (1860-61) he captured some of the Catholic sensibilities that would have seemed most exciting after decades of religious conflict with the Spanish. It was John Phillip who also produced The Evil Eye (1859) in which he shows himself, in full Victorian garb glancing furtively at a Spanish woman, sketchbook in hand. The woman responds by hiding in the shadow of her tent, fearful of the artist capturing a part of her soul. The painting could be a slightly patronising depiction of Spanish superstition but also reads as a self-knowing glance towards the futility of trying to capture a country on canvas. As British interest moved on from the war, towards a more genial survey of Spanish life the Islamic architecture of the Iberian Peninsula attracted more attention.

The exhibition contains a variety of images that indicate a simple appreciation for the intricacy and charm of Islamic pattern work. Amongst these the albumen print photographs of Charles Clifford are of particular interest not just for their startling clarity but also their journalistic reportage of the Alhambra, which struck the British public as unimaginably exotic, even 'Oriental'. Most of the images of Spanish architecture are spectacular in nature but there is one painting from later in the period, which shows the Alhambra covered in scaffolding and despite being a somewhat quaint in execution, the image is indicative of the recognised commercial value of Spain's ornamental legacy. Inevitably, the British taste for Spanish flavours led to the discovery and exposure of Spain's Golden Age painters, Velazquez and El Greco foremost amongst their number. Having seen a fair amount of Spain by the British the opportunity to see Spain by the Spanish is most welcome and the difference is significant. Shadows deepen and where the British saw charming superstition the Spanish show conscientious fervour and saints wearing their faith like a plague. Besides the content of the paintings their style is astounding and it is El Greco and Velazquez who stand out. El Greco's Tears of St Peter (1580s) is striking in its expressionistic re-imagining of biblical imagery and it seems reasonable to think that the idiosyncratic nature of such work may be related to the overtly self-conscious focus on personal style that emerged in Britain in the 19th century. It was however, Velazquez who would influence British painters most for the striking realism of his technique and the sombre tones that pervade his work. The exhibition progresses quickly onto the influenced British artists in question. While Millais' explicitly references his Spanish influences, Hazlitt directly copies many of Velazquez's works, as he was encouraged to do by the culture surrounding the Royal Academy at the time. It is probably Singer-Sergant who created the most memorable images (and shadows) in this style. It is with Singer-Sergant that we are brought to the close of the exhibition which sees a rally of interest in Spanish surface textures – light, colour, the drama of the bullfight abound in work around 1900. Melville's saturated watercolours stand out here as the last gasp of aesthetic pleasantry before a return to the origin of British interest in Spain – war. When the civil war broke out in Spain artists sought out a new language, one of abstraction, one that was violent. Compared to Wilkie's responses to the War of Independence the British artists appear much more in earnest with their sympathies but it was Picasso who stole the subject matter and made it his own (which, after all, it was) and it is not unfair to say that next to Weeping Woman (1937) and Guernica, (1937) the British endeavours of this period suggest that the British painters' understanding of the Spanish lacked depth at this point in time. The exhibition shows significant progress in British attempts to understand Spain along-side more commercial pieces trading on Spain's exotic imagery and despite the fact that by the beginnings of the 19th century there still seemed to be something lost in translation, the NGS should be congratulated for exploring the vital attempts of one culture to understand another in a climate when relativism and mistranslation abound. 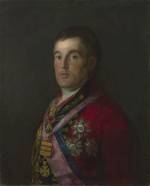 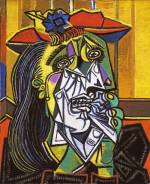