The Pre-Raphaelite Brotherhood, formed in 1848, is one of the very few phenomena in British art which can be regarded as a “movement” in the sense of a group of artists with a degree of explicitly shared artistic and cultural ideals. Although the great talents of British art have often had strong artistic and cultural links with other individuals and groups, they tend to stand or fall as individuals rather than as members of a group enterprise. British artists have preferred loose affiliations to any kind of declared collective identity.

The priorities of the Pre-Raphaelite Brotherhood have to be seen in the context of British art practice as it surrounded them in their youth during the 1840s. Their foundation principle can be stated simply in one word: truth. This notion of truth was manifested in two principal ways: first, truth to observed nature; and, secondly, truth to one’s own moral and spiritual values.

The first – truth to observed nature – can be seen as both stylistic and technical. The Pre-Raphaelites sought a return to a faithful observation of visual phenomena. This entailed precise and meticulous attention to whatever was to be depicted. The principal exponents of this aspect of Pre-Raphaelite philosophy were Millais, Holman Hunt and Ford Madox Brown. The ideal of truth to perception is manifested in a remarkably small number of key works – I would put it as somewhere between ten and twenty pictures – mostly created in the decade following the formation of the Brotherhood. Iconic examples of this impulse are Millais’ Christ in the House of His Parents (1849-50) and Holman Hunt’s The Awakening Conscience (1853).

One can only appreciate why such pictures were at first regarded as peculiar or shocking by reviewing the dominant pictorial culture of the early Victorian period and the ambience in which the members of the Brotherhood were trained. The mainstream of painting in Britain had become dominated by an inherited pictorial rhetoric drawing its strength from the late High Renaissance and Baroque – in other words, post-Raphael. This was epitomised by the culture of the Royal Academy and its continuing reverence for its founding President, Sir Joshua Reynolds. In practical terms, this meant constructing pictures according to inherited pictorial rules about the geometric relations of content and the distribution of tone and colour. Such pictures often contained large areas of gravy-like gloom, contrasted with judicious areas of gestural brushwork, hence the Pre-Raphaelite Brotherhood’s contemptuous epithet – Sir “Sloshua” Reynolds. According to the Pre-Raphaelites the rot had set in during the lifetime of Raphael and it led to a gradual degeneration through Mannerism and the Baroque.

The Brotherhood found new life and inspiration in the art of the early Renaissance, with its restrained simplicity and directness of expression. A key work here was Van Eyck’s Arnolfini Marriage Portrait (1434), acquired by the National Gallery in 1842 and accommodated in premises also occupied at that time by the Royal Academy Schools. Exposure to early Renaissance art led the artists of the Pre-Raphaelite Brotherhood to pay scrupulous attention to every aspect of detail, with the consequence that every part of the canvas is clearly resolved in terms of content, whether it be the dramatis personae, incidental accessories or atmospheric conditions. Just as much time was spent on the painting of a cabbage or a piece of furniture as upon the central characters.

The second expression of the pursuit of truth took the form of truth to one’s own ideals - social, moral and aesthetic. Here again, one must see the originality of the Pre-Raphaelite Brotherhood ethos in terms of its contrast to dominant attitudes to painting. Painters had, in their eyes, become enslaved to routine social obligations, churning out vacuous society portraits, pompous and routine religious subjects, and work judged to tickle the humorous fancy of the picture-buying public. Edwin Landseer, then at the peak of his fame, epitomised this banal trivialisation of painting, with his anthropomorphic and sentimental pictures of animals, referred to contemptuously by the Pre-Raphaelite Brotherhood as “monkeyana”.

Revolting against the perceived trivialisation of art, the Pre-Raphaelite Brotherhood determined that the artist must have a deep and genuine commitment to the intrinsic importance and value of one’s subject. This expressed itself in a wide range of priorities, values which included the religious (Millais Christ in the House of His Parents), the emotional (Ophelia), themoral (Holman Hunt The Awakening Conscience) and the socio-economic (Ford Madox Brown Work).

Although the Pre-Raphaelite Brotherhood dedicated themselves to the ideal of truth to nature, it is immediately clear that this principle alone cannot determine the ultimate nature of the art work. For them, it entailed meticulous attention to every detail, over the whole area of the canvas: everything is clearly resolved. This results in a kind of self-consciously posed tableau vivant in which the characters remain forever frozen in time. However, the truth is that we do not see the world like this, but as a fluid, ever-changing succession of visual events. The eye is constantly focussing, selecting and refocussing, ranging across the whole field of vision. This is an alternative kind of truth, best realised by the Impressionists.

After a brief period of efflorescence Pre-Raphaelitism went into a rapid decline in the late 1850s. Millais was reduced to grinding out the kind of lucrative society portraits that he deplored as a young man. Rossetti, who never had a very tight purchase on observed reality, depended increasingly upon his inner resources with pictures populated by languid and formulaic women, rendered in oleaginous greens and confectionary pinks. In the work of Burne-Jones, this led to what can only be described as a new form of Mannerism, curiously similar to the Mannerism of the 16th century, with its elongated anatomy, dreamy demeanour and languid gestures.

A simple index of this transition is the depicted size of heads. In the foundation works of the early years, heads were consistently small – between five and ten centimetres in height. By the late 19th century this scale had more than doubled, heralding an inexorable drift away from sight-size and attention to observed detail. With this inflation of scale came the use of larger canvases and the assumption that the spectator would have to stand well back, thereby breaking the close physical relationship implied by the iconic works of the early period.

This exhibition is a feast for the eyes, together with its excellent and beautifully illustrated catalogue. I would, however, quibble with the subtitle chosen for the exhibition: “Victorian Avant-Garde”. To serve as an avant-garde a movement must satisfy two conditions. The first is that it must be conspicuously original for its time, and there is no doubt that the Pre-Raphaelite Brotherhood were shockingly original. However, a genuine avant-garde must also satisfy a second condition; this is that it must serve as a springboard for a continuing development. Cubism, for example, clearly satisfies both conditions: it was highly original in its day, and it served as a continuing source of inspiration to generations of artists who worked in conspicuously different ways.

Like a brush fire, the Pre-Raphaelite Brotherhood blazed brightly for a few years before being extinguished by convention and age. Nevertheless, we can still warm our hands and hearts before these magical works. 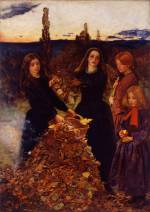 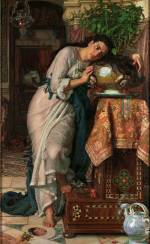 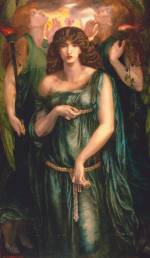