The house and its potential as a home, a prison, a marker in one’s life, is fertile territory and an inspired idea for an exhibition but, in this case, one lacking in impact 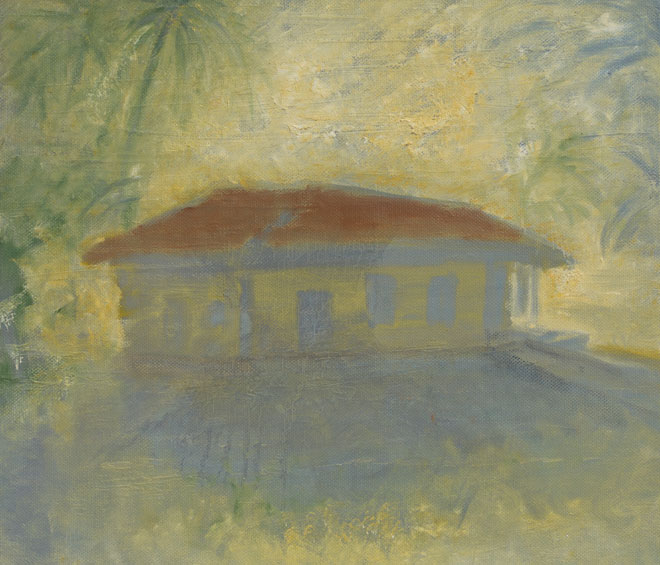 It was the American writer John Howard Payne who wrote: “Mid pleasures and palaces though we may roam / Be it ever so humble, there’s no place like home.” The journey home has provided protagonists of countless novels with their motivations; adventurers, soldiers and captives long for hearthside, for loved ones, for their comfortable beds. But a home can also be a prison, a place of fear, somewhere haunted or sinister.

Belmar, New Jersey (1935) by Alice Neel (1900-84) details two houses, one small with a pink roof and white-columned porch, the other large, dark and solid. Behind this second house a supernatural swirl of yellow cloud tapers to a bolt of lightning and the horizon glows an apocalyptic red. Neel was also an insightful portraitist who painted her friends and family with the descriptive perception of a writer. “I go so out of myself and into them,” she said “that after they leave I feel like an untenanted house.”

The paintings of Hernan Bas (b1978) are like fractured dreams straddling interior and exterior environments, adolescence and adulthood, death and rapture. His crowded canvases are richly coloured yet thematically mysterious. He constructs worlds with literary and religious influences and populates them with silent young men who inhabit these darkly romantic and nihilistic environments. Preferring the Out to the Indoor Night (2010) depicts a young man, a teenager perhaps, sitting on a pile of logs reading by the light of a full moon with his back turned on the leaning wooden houses behind him, while a night sky of pink, blue and black shards splinters overhead. It is as though he is summoning up another world – the world that lies in his book, perhaps.

Mamma Andersson’s Pigeon House (2010) exudes a similar atmosphere of disquiet. A woman with her hands placed demurely on her lap is flanked by two men in suits. The man at the far end of the table reaches down for something unseen. Is this the woman’s house? Who are these men? The sombre hues – blacks, greys and creams – are barely colours at all. Foreboding clings to the scene, an awkward silence, a pregnant pause. Are these men delivering bad news? This is the artistic equivalent to reading a single line in the middle of a book.

Placed among the subtle complexity of these darkly inviting works, Grayson Perry’s cartoony drawings appear frivolous and out of place. They belong in a different exhibition altogether, as do Adrian Ghenie’s Untitled (Strada Mihail Kogalniceanu in Cluj) (1998) and LS Lowry’s Old Lamp Behind Leaf Square, Salford (1948). The last two are street scenes that add nothing to the idea of home, but seem to have been included by virtue of containing images of buildings. The whole collection feels a bit of a hotchpotch, as though it has been cobbled together to fill a gap in the exhibitions programme. But that said, there is a nugget of an idea here that is intriguing and begging to be explored further.