One of only two female members of the vorticists’ group, her work was later sidelined. This show goes some way to redressing those years of obscurity, with her singular vision and artistry shining through

I had never heard of the British artist Helen Saunders (1885-1963) before seeing two of her works in the impressive show Women in Abstraction, at the Guggenheim Bilbao in 2021 (also on at the Pompidou earlier that year). Mind you, few contemporary art lovers would have heard of her prior to that point. She was one of so many women of talent, inspired by the social activism and modernist movements of the 20th century, whose artistic careers were eclipsed because of the widespread lack of support or encouragement and, indeed, downright chauvinism of the art world, not to mention wider society (marriage and children being deemed women’s likely destination, bringing with it a predicted snuffing out of their creative careers).

The compositional vigour and inspired colouring of just those two works at the Guggenheim – Vorticist Composition, Blue and Green and Canon (both 1915) – were enough to lodge her in my brain. This solo retrospective at the Courtauld was a must-see and a great way to redress some of those decades of obscurity into which she sank, not helped by the fact that, sadly, most of her early work was destroyed when a bomb landed on her flat in 1940. This exhibition was made possible thanks to the donation to the Courtauld, in 2016, by Saunders’ relative Brigid Peppin, comprising the 18 drawings and watercolours seen here. Though small in quantity, they are rich in the qualities that infused her artistic practice throughout its development.

In 1915, when the two aforementioned works were made, Saunders was far from the margins: she was at the centre of a fascinating explosion of idealism and creativity that spanned the visual and literary arts. Having studied for three years at Rosa Waugh’s teaching studio in Ealing, Saunders attended the Slade School of Art. Waugh also hired teachers and graduates of the Slade to instruct her pupils, including Augustus John, who apparently gave Saunders a one-to-one portrait masterclass. The works in this show reveal Saunders’ enduring interest and skill in exploring spatial representation, undoubtedly fuelled by Waugh’s theories around “natural perspective” – a desire to represent form and perspective not as it might scientifically be measured or mapped, but allowing for overlapping visual fields more evocative of everyday phenomenological experience.

In 1911, Saunders had left home, and was enjoying her new-found freedom, attending exhibitions curated by Roger Fry, such as Manet and the Post-Impressionists at the Grafton Galleries in 1910, and Paul Cézanne and Paul Gauguin at the Stafford Gallery in 1911. By 1912, she had begun to show her work alongside London’s avant garde, at Vanessa Bell’s Friday Club, and was selected for Fry’s exhibition Quelques Indépendants Anglais in Paris, and the Fifth London Salon of the Allied Artists’ Association.

By 1914, she had become a close friend and colleague of Wyndham Lewis (1882-1957), joining his Rebel Art Centre alliance in 1914, and then becoming a co-founder of the vorticist art movement, spearheaded by Lewis, along with several other poets and painters, including the only other female, Jessica Dismorr. The vorticists’ intention was to express and celebrate modern life, in works that seemed to fuse human with machine through explosively choreographed compositions, pivoting around the diagonal, veering from the seemingly purely abstract to human-like clusters of pipes and pistons, and boldly experimental in their use (or absence) of colour. Although sharing similar inspirations, vorticism set itself apart from its continental cousins, cubism in France and Italian futurism. The movement initially burned bright, celebrated in exhibitions and even interior decoration - in 1915, Saunders worked alongside Lewis on the wall painting for the vorticist room at the Restaurant de la Tour Eiffel in Percy Street. But its optimism and vigour were eventually depleted by the tribulations and deprivations of the first world war and, in 1917, Lewis (claiming, subsequently, to have been the sole instigator and exponent of the movement, despite evidence to the contrary) declared the movement over.

Saunders output during this vorticist period was said to be substantial, though that 1940 bomb put paid to most of it. But there are six of her key vorticist period pieces here, including Vorticist Composition, Blue and Green (1915). You can see in these few small but vibrant pieces how profoundly her vorticist world view differed from that of Lewis’s – his was all about the machine, the man-made and the surface of things. Hers, as Peppin (an art historian in her own right) said in her essay for the Women in Abstraction monograph, “seems to have shared in [Wassily]) Kandinsky’s belief in ‘the value of one’s feelings as the only aesthetic impulse’.” There is a strong sense of dynamic figures and animating forces behind the tilting, whirling planes of her works, and such a powerful sense of movement.

In fact, one of her most significant vorticist works is present in the building, albeit in a vandalised form: Lewis himself painted over one of her larger oil paintings, Atlantic City, with his work Praxitella – an act that seems both callous and gratuitous. And we get to see this act in all its destructive detail, thanks to the Courtauld’s research and conservation work, exhibited and catalogued in a dedicated room, up one flight of stairs from the Saunders exhibition. The conservators have X-rayed that Lewis painting to reveal what has to be Saunders’ composition – it is identical to her Atlantic City print in the 1915 edition of Blast, the vorticists’ house magazine. This evidence – along with an attempt at reproducing the vivid colours Saunders was using, thanks to paint analysis – is exhibited along with Lewis’s finished painting – or overpainting.

One can imagine, if she knew of it, Saunders feeling deeply wounded by this act of sabotage by her former ally. But whatever forces conspired to render the other vorticists’ contributions irrelevant and ignored in later years, she was sufficiently put off to give up exhibiting altogether. But she did not give up painting and drawing. There are a handful of pale but very interesting graphite and watercolour works from a trip to L’Estaque in the 1920s, undoubtedly in homage to Cézanne, whose work made the towns and landscapes of that part of southern France famous. There are also some 1950s works, still lives and landscapes, which show her keeping alive the spirit of spatial experimentation that characterises her earlier work.

For all that the art world’s chauvinism must have been discouraging, the interesting thing is that Saunders acquired neither husband nor children to make poverty of time or resources the reason for lack of later artistic output. What is more, she had an independent income, which allowed her to live without a salaried job. She often wrote to friends and family of her preference for solitude and the quiet, contemplative life – but whether that was the reason for her eschewing public recognition, or a result of the abrupt withdrawal of that recognition, it is impossible to say.

But it is all the more of a treat to be able to experience what evidence remains of her singular vision and artistry and ponder how that gift for evoking feeling and atmosphere through her exuberant palette and spatial sensibility might have panned out were she to have been born, say, 100 years later. 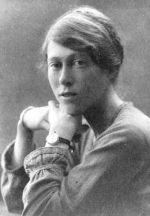