Botticelli and Treasures from the Hamilton Collection

Botticelli and Treasures from the Hamilton Collection

Botticelli’s delicate illustrations of Dante’s The Divine Comedy steal the show in this exhibition of prints and manuscripts from the Hamilton Collection. Ernst Vegelin van Claerbergen, head of the Courtauld, talks to us about them 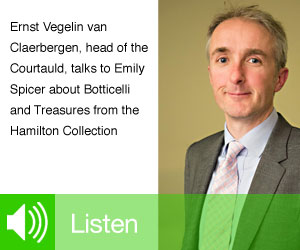 When the 12th Duke of Hamilton’s love of horses, yachts and gambling got his family into phenomenal amounts of debt, he was forced to auction off his grandfather’s immense collection of paintings, prints and decorative arts. In 1882, the Berlin Kupferstichkabinett (Prints and Drawings Museum) bought many of the prints and manuscripts from Sotheby’s before they even went to auction, much to the distress of John Ruskin and Princess Victoria (Queen Victoria’s eldest daughter), who tried to prevent the sale. Among the collection were Botticelli’s illustrations of Dante’s The Divine Comedy, delicately rendered in metal point and brown ink, and for the most part left tantalisingly unfinished. But the Hamilton’s loss was the public’s gain, and these treasured drawings, along with some of the collection’s sumptuous manuscripts, have returned to England for an exhibition at the Courtauld Gallery in London.

Giorgio Vasari, that most lively of Renaissance biographers, describes Sandro Botticelli (1445-1510) as a mischievous man who enjoyed practical jokes, was bad with money and who led a “haphazard existence”. It seems strange then that this exalted artist, with such a sense of fun and love of pranks, should become “a follower of Savonarola’s faction”. Savonarola was an ascetic friar who attempted to squeeze every frivolous aspect out of the people of Florence through a short, but not insignificant, reign of terror. He was finally excommunicated and executed in 1498, but his influence lived on into the 16th century. It is possible that Botticelli was working on his illustrations of Dante’s The Divine Comedy during Savonarola’s self-appointed leadership of Florence, as the drawings are dated c1480-95.

Vasari tells us that the artist finally gave up painting to become a piagnone (a wailing penitent), as they became known, and would have died penniless and destitute had it not been for the generosity of his friends and supporters – a strange end for such a colourful man, if Vasari is to be believed. The Divine Comedy, however, never fell out of favour, not even under Savonarola. The epic poem describes Dante’s imagined journey through hell, purgatory and heaven, where he is ultimately reunited with his childhood sweetheart, Beatrice. The Roman poet Virgil guides him through the first two realms, but as Virgil is a pagan, he cannot enter heaven. This is where the divine Beatrice acts as Dante’s guide though the celestial realms of Paradise.

Botticelli’s illustrations are fascinating in their detail and nuanced interpretation of the text. The pages depicting hell are full of writhing bodies labouring under gruesome punishments carried out by grotesque demons. The faces of the damned are all alike, but as Dante and his companion move into purgatory, where the dead repent and wait to pass into heaven, the humanity of individuals is evident in their detailed portraits. Dante’s face gains more character, too, as he interacts with his heavenly guide and talks with the radiant souls of Peter, Adam, John and Jacob. The highest reaches of heaven, or Empyrean as Dante referred to it, posed a challenge to Botticelli, as the abstract nature of the text left precious little to illustrate. The final page, in fact, is entirely blank, save the three small figures of Mary, the Archangel Gabriel and Christ sitting on top of a faintly drawn arc. Whether this page is unfinished due to interruption, or because Botticelli couldn’t visualise Dante’s conceptual text, is the subject of much speculation. It is difficult to gauge what effect Florence’s turbulent times had on Botticelli’s execution of these illustrations, if any. What is sure, however, is that these masterful drawings chart a spiritual and artistic journey, not only of the great Dante, but also of the artist himself.

I spoke to Ernst Vegelin van Claerbergen about the gore and the glory in Botticelli’s illustrations. 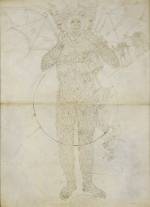