Nightmarish visions and demonic passions fill the pages of Goya’s late drawings. But as this exhibition at the Courtauld illustrates, there is also sadness and humour among the withered limbs and toothless old women that haunt these fascinating albums

What keeps you awake at night? Is it those unpaid bills, a bad day at work, worrying about your nearest and dearest? And what about those dark hours of the morning, that half-waking, half-dreaming time when the rational side of your brain has gone to sleep? If you are unlucky enough to stir from your sleep in those wee small hours, you may find that all practical concerns have left you, only to be replaced with the most irrational of fears. To the half-conscious mind, anything is possible; midnight, after all, is the witching hour.

To acknowledge this shadowy world is not to believe in magical old crones or the dark arts. Rather, it is to recognise the fragility of the human mind, and society at large, something that Francisco José de Goya y Lucientes (1746-1828) understood all too well. For Goya had his fair share of feverish nights and dark days. He bore witness to the horrors of the Napoleonic wars, survived two serious illnesses – the second of which left him totally deaf – and suffered a breakdown. In Goya’s frightening world, witches are symbols of chaos, of evil intent and malign forces. Ultimately, they represent the most diabolical side of humanity.

Goya was a man of the Enlightenment; he was not frightened of phantoms and monsters. Insanity was the terror that stalked his dreams. The titles of his drawings hint at this and similar themes that consumed his later years; Madness, He Wakes up Kicking, Dream of a Good Witch, Nightmare, The Sleep of Reason Produces Monsters. All of these drawings were originally part of a series of albums created by Goya in the second half of his career. Around 1819, he began working on the Witches and Old Women album, about the same time as he started his famous Black Paintings. This group of unsettling murals was made to adorn the interior walls of his house near Madrid. After his death, the murals were removed for sale and his albums were broken up. Only now has an entire album has been reunited and reconstructed, a process that required forensic precision.

These ink drawings, like his Black Paintings, were made by the Spanish master for his own eyes, and possibly the entertainment of his closest circle of friends. However, they were not idle sketches. Each has been carefully worked, and in some cases reworked, to most effectively capture the lonely outlines of the old or the monstrous tangles of wickedly supernatural groups. Some of these figures, like those in the drawing entitled Mirth, magically float in the air while others fall or fly. There are frightening forces at work. Wicked Woman illustrates a figure more demonic that human. She looks up at us, disturbed from her ghoulish activities, her ghastly sunken eyes peering out from her skull-like face as she prepares to chew on the limbs of an infant.

But these drawings are about more than an old artist recording his most lucid nightmares, or his fears of madness. Many of his works have a satirical, and even erotic, edge. They are a comment on sex in old age, on lingering passions and unfulfilled dreams. What Folly, Still to be Thinking of Marriage, the artist declares in the title of a drawing depicting a hunched old woman clutching her rosary. Goya casts a coldly critical eye over this pathetic figure; she refuses to face reality. We enter the world of fantasy again with Linda Maestra! or Pretty Teacher, an ironically titled piece depicting a scrawny, elderly witch, with a firm grip on the handle of her broomstick. She is teaching a shapely novice to fly. Her young protege rides behind her, clinging with some trepidation to the old crone’s shoulders. If we are left in any doubt as to the meaning of this image, a night owl – the term is Spanish slang for a prostitute – accompanies this naked duo on their nocturnal lesson.

The other great theme of this exhibition seems to have become a preoccupation for Goya in his latter years, unsurprisingly so when one remembers that he reached the not unimpressive age of 82. Old age is represented in his drawings with humour, sadness, irony and a biting wit that Hogarth would have appreciated. Showing Off? Remember Your Age – a warning to those who have forgotten their limitations – depicts a woman tumbling headlong down a flight of stairs with enough slapstick gusto to make Frank Spencer envious. A similarly animated figure is the subject of Content With Her Lot, a joyous image of an elderly woman dancing a merry jig to the castanets in her hands. She throws up her arms with youthful abandon, undeterred by, and unconcerned with, her advanced years. In these drawings, some from the Black Border album, old women wrestle, dream of marriage and have active sex drives, although Goya views each of these with a satirical, and sometimes scathing, eye. Eventually, though, even the most spirited souls will succumb to the ravages of time. A particularly touching image shows a frail figure bent double, supporting his tired frame on two sticks as he struggles to walk. As the title suggests he (or she) Just Can’t Go On at the Age of 98.

This exhibition affords us a rare opportunity to witness Goya’s innermost thoughts, his private world and his most disturbing fantasies. He was a master of imaginative invention, a conjurer who could summon on paper creatures from the darkest realms of the human mind. He was also a pessimist – or perhaps a realist – when it came to human nature, having witnessed the worst that people can inflict on each other. But as he became an old man, locked in a silent world with nothing but old age to look forward to, he also recognised the drive to go on, the vital life force that keeps a toothless old woman dancing with joy. 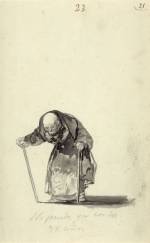 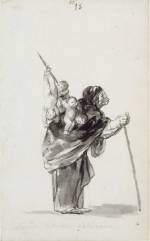 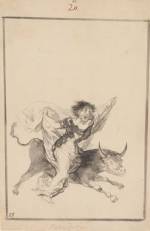 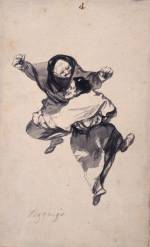 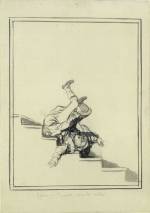 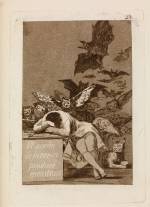