Inspired by the American Pattern and Decoration Movement, Lee and Bruton emerged in the 1980s and cut through male-dominated preconceptions of what abstract art should be 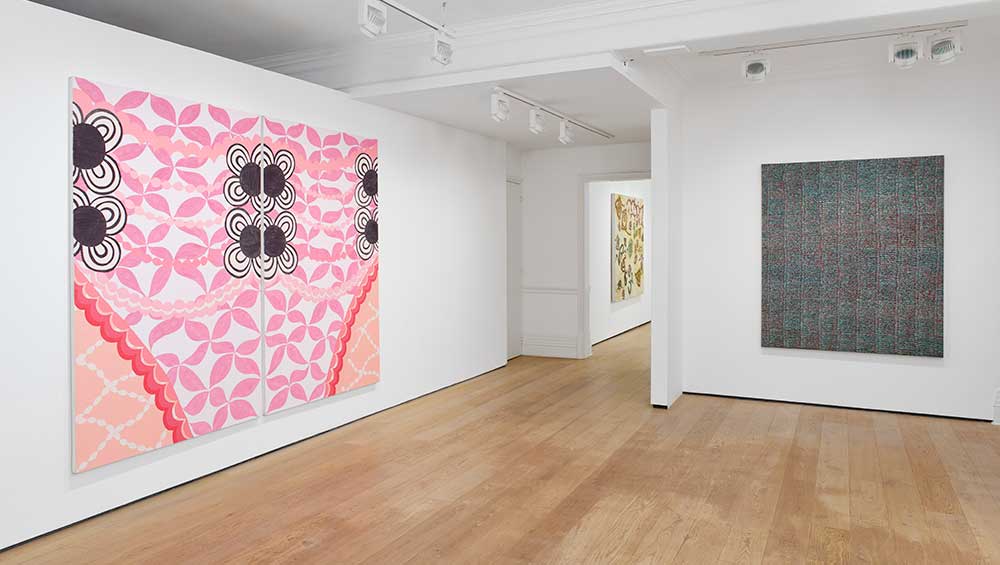 To say that a painting show is instantly lickable might fall short of pedagogical refinement and certainly isn’t obvious in reproduction, but it does describe with pinpoint accuracy the enchanting surfaces created by Jo Bruton (b1967) and Rosa Lee (1957-2009) in their joint exhibition Haptic Vision. With swirls of whipped-cream pigment and a candied delight of coloured beading, both artists bring a confidence to the canvas surface that seems less about the combative nature of male-dominated abstraction – where each move catapults a responsive strike – and more about opening a dialogue of possibilities. 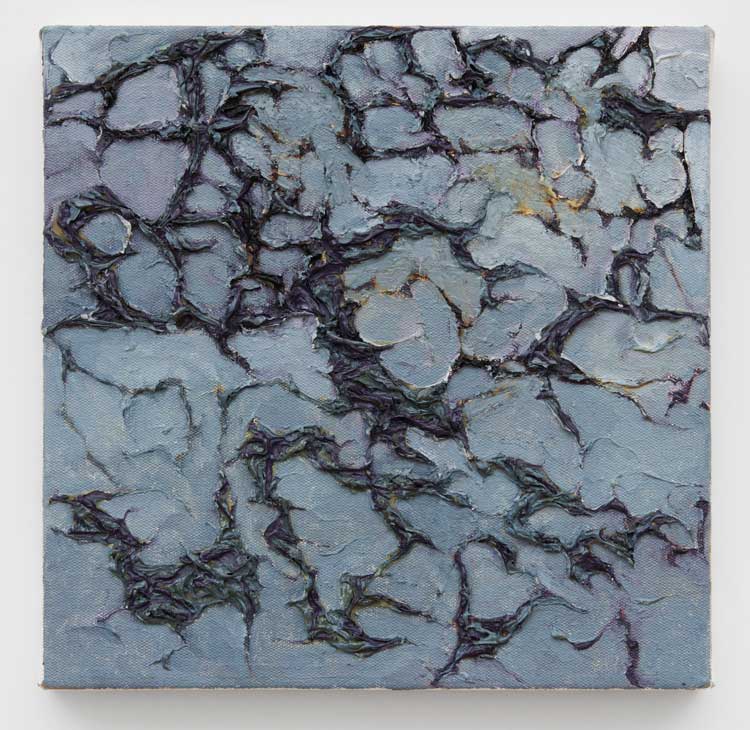 This is an exhibition of close colleagues who critiqued and supported one another’s approach to abstraction. While Bruton demonstrates how images are a compilation of layered shapes and minute particles, Lee asserts that they are a rhythm of mark-making with her strange articulation of brushstrokes. Underpinning all the work is a shift away from traditional ocular-centric perception, towards the embrace of other sensory receptors. Yet their selection of personal prompts from the archives of art history are equally apparent. Lee’s little surface of Untitled 2005 might be likened to a fabric swatch of blue satin, embossed with embroidered details, recalling the sumptuous garment in Titian’s A Man with a Quilted Sleeve (1509). Turn to Bruton’s Cabaret (2000) and her frilly white trims point to the lace collars propping up heads and enveloping wrists in 16th-century portraiture, equalising the status of Las Vegas showgirls with aristocratic pomp in a properly successful example of “levelling up”. 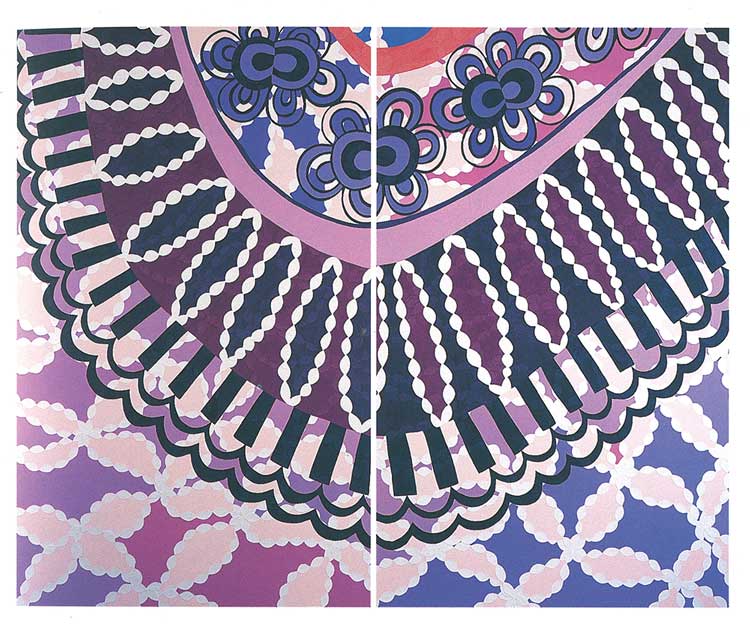 Originally from Hong Kong, Lee scoops wide to select influences from domestic crafts, lived experiences and her cultural lineage. In the glorious Swathe (2003), light orange pops fluorescent as it trails into the deep of its blue-green neighbour, like loose threads on a bed quilt or outlier streams of a larger waterway. 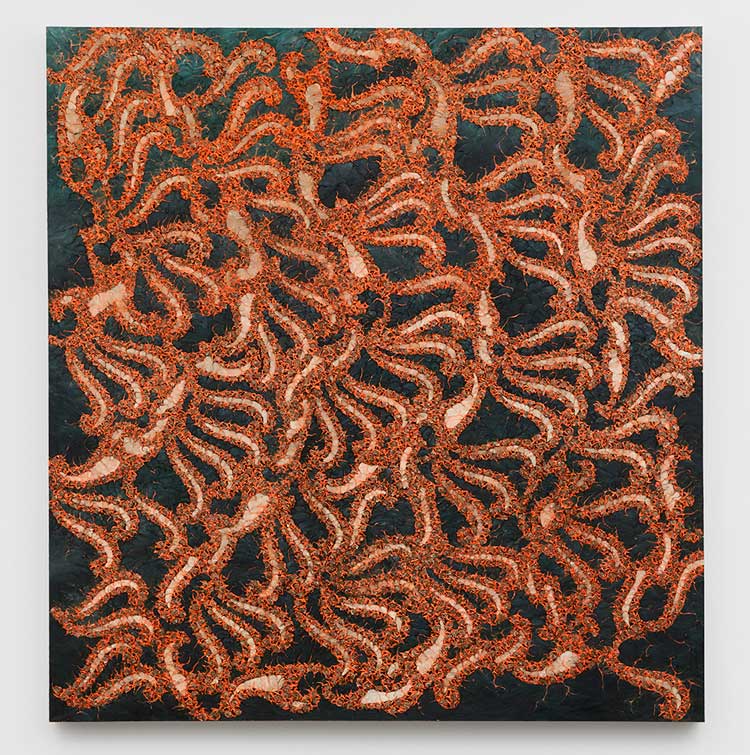 In a spectacular coming together of the paint flicks and mixes of her other works on display, it plays a double game of decoration plus something other. Here, the other might be landscape. Whereas, in the knitted surface of Inscriptions (1999), it is possibly her native alphabet: lyrical repeats of script that run down a column rather than across the page. All the while, despite her dense daubs of paint, the clean canvas edges are a telling sign of an orchestrated space of artistic expression that has its designated limits. 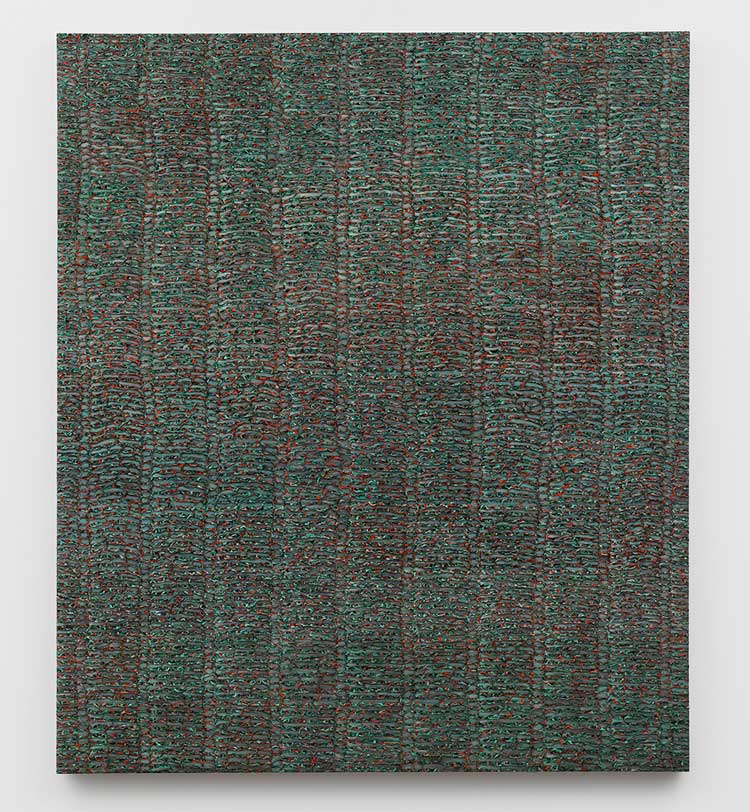 In a gesture that questions if the work is bound to its surface, we enter narrow enclaves in the gallery to find British accomplice Bruton’s wallpaper. Feather Run (2022) features dotted illustrations of cut-out figures which appeared in Run, her solo show at Matt's Gallery in 2018. While the runners suggest an array of potential actions an artist might encounter during the making process – compulsion, repetition, escape – they also convey a sense of empowerment as they channel Nike, the goddess of victory in art, not just athletics. They recall the artist’s words to describe the necessity of making she shared with Lee, as a “determined force that continues in spite of aesthetic hurdles, social restrictions and whatever life wants to throw at you”. 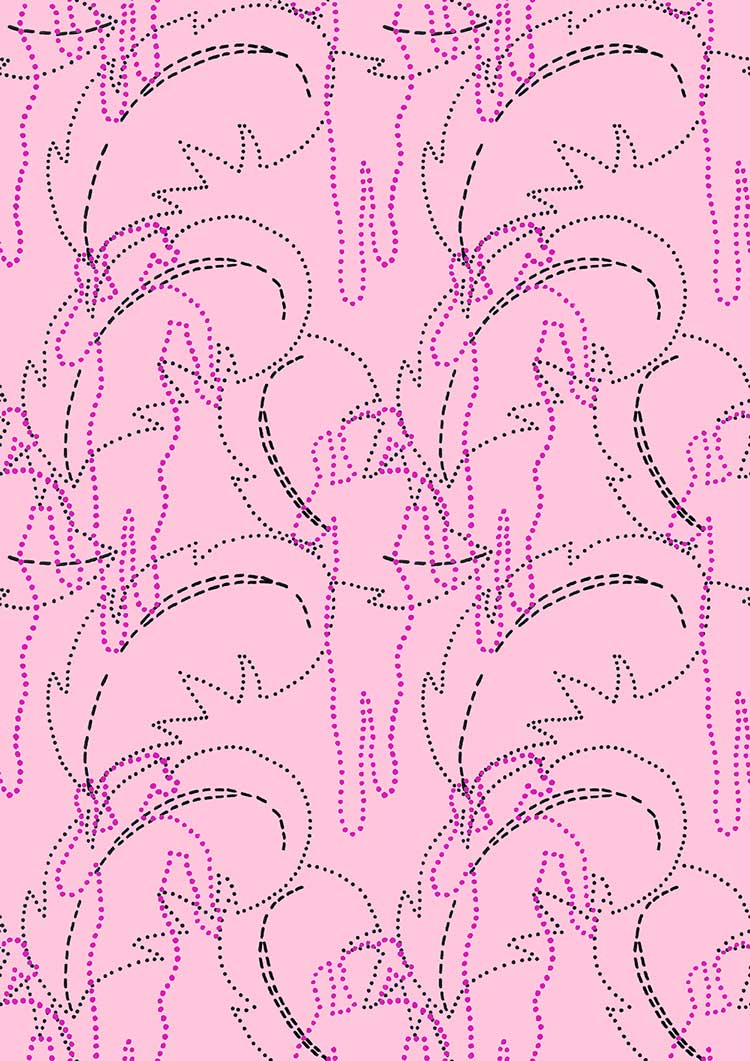 So perhaps Bruton is tickled pink with the prospect of her own potential, hence the teasing and voluminous feathery wings that accompany the runners on the warmly hued, floor-to-ceiling paper. Foregrounded by small paintings, Star (2003) is spangled red, white and blue, while Lapdance (2003) mimics tasselled titillations, both mimicking jolly costumes against heated flesh. 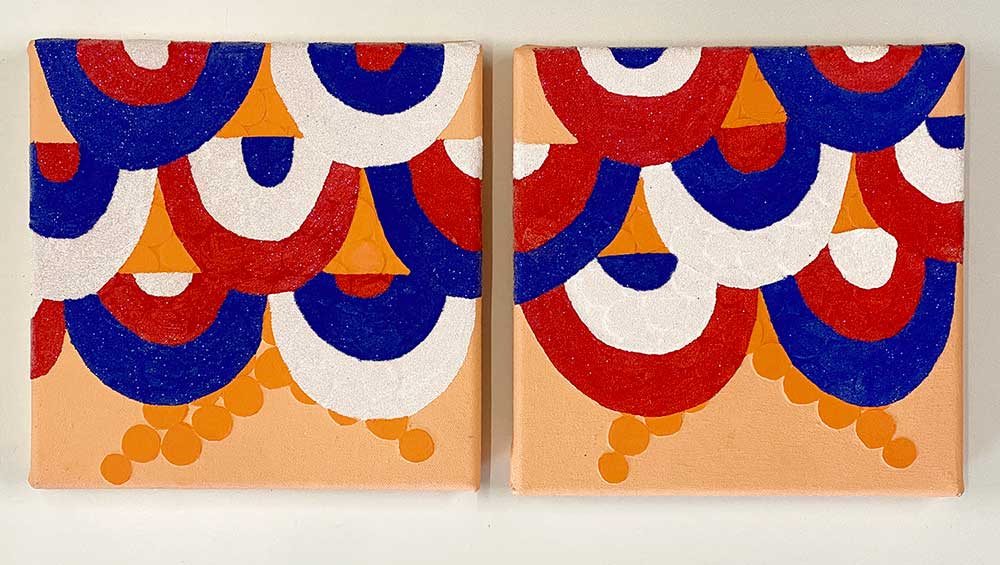 It is impossible to experience Haptic Vision only through seeing, without its sense of touch, as Bruton and Lee demonstrate the French philosopher Maurice Merleau-Ponty’s concept of bodily perception. Bruton reveals her fiddly hand-cutting and pasting with streamers of carded shapes on canvas, forming a skeleton in readiness for pigmented skin. We can envisage Lee moving to her own tempo, in gestural conversation with her canvas. Her loose twists of buttery impasto encourage you to run your pointer through the paint and enjoy the finger-licking spoils. Or one might be tempted to gently tug at a spiral as if it were seaweed, partly buried in sand. Though it is not just handiwork going on here. With her use of beading, Bruton’s work alters drastically with each shift of the onlooker’s body, enticing the viewer into an awkward dance of sorts. It is particularly amusing when overseen by the partial image of a giant professional dancer, if the size of her knickers is anything to go by. 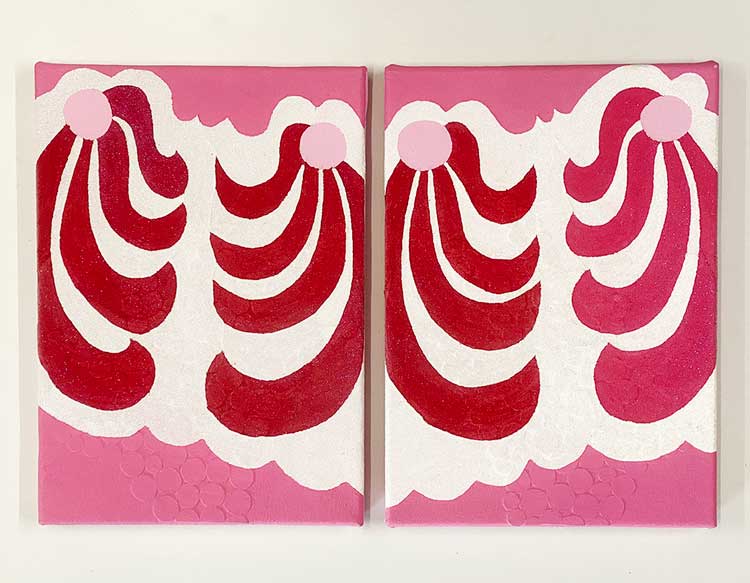 Segments, glimpses and fragments, all celebrated by the decorative and filtered through the personal, glisten and gleam throughout the gallery. With all this gala, these canvases first appear as simple folk. In acts of colourful kindness, they guide us around the walls, only to enchant with their detail and baffle with their polyvocal nature, attempting “to be inclusive, alluding to senses other than the visual or the purely cerebral”, as Lee described in her 2004 essay Threads: Dialogues with Jo Bruton, Beth Harland, Nicky May and Katie Pratt. And therein also lies the seriousness of the work. 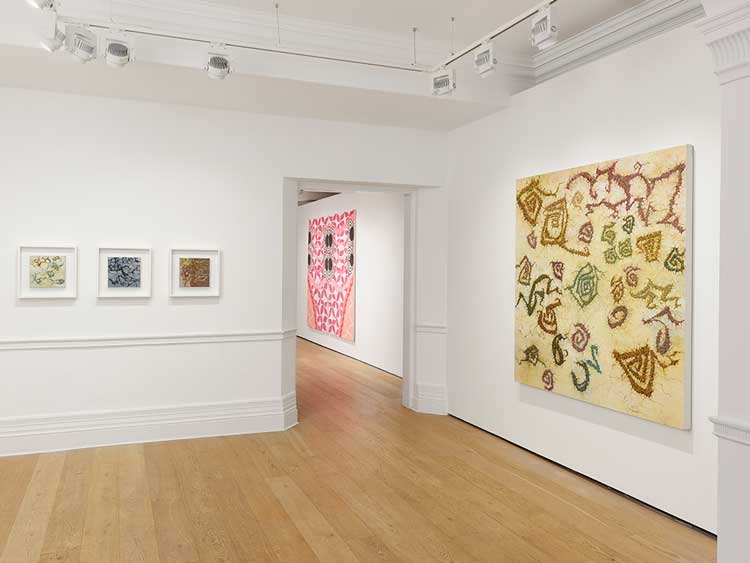 Well before her untimely death in 2009, Lee was something of a life-raft for Bruton and artists like her who were struggling to occupy space amid the male-dominated preconceptions and expectations of the 1980s and 90s that defined what abstraction should be. Inspired by the American Pattern and Decoration Movement, they built camaraderie to prize open discourse and make way for what Bruton describes as a fluid space “for the personal, idiosyncratic and multiple ways of approaching form and making”. Long may this continue, haptic edge to edge, within and beyond the frame. 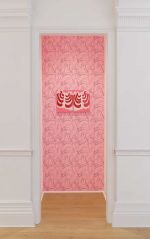