In his latest solo exhibition, Belgian artist Pieter Vermeersch casts a minimal eye over the fragmentation of time and space, bringing serenity through simplicity

Born in Kortrijk in 1973, Pieter Vermeersch has been described as one of Belgium’s leading artists. While predominantly exhibiting in his home capital of Brussels, his personal interpretations of abstraction have also been presented at private and public galleries internationally, including Team Gallery, New York, ProjecteSD, Barcelona and Galerie Perrotin, Paris. Vermeersch is an artist who attempts to convey and question via a certain lack thereof. Through his large-scale monochrome paintings, he strives to harness the unseen influence of the minimal, and in so doing sees himself inducted into a long-lasting and long-celebrated artistic ideology.

For generations, artists such as Mark Rothko, Yves Klein and Kazimir Malevich have attempted to locate and convey a certain ethereal quality within a space of visual absence, one that abstract painter Peter Halley defined as a “serenity or radiance”. This sense of serenity through simplicity has been discernable in Vermeersch’s compositions for some time. For his 2011 work Untitled (Blue 0-100%), shown at the Londonewcastle Project Space, London, Vermeerschwashed the inner walls of the 3,000 sq ft of galleries with a thin layer of paint that delicately changed from 0 to 100% of the colour Basic Blue. The concept was undeniably simple. The effect that it inspired, however, was not. Seduced by the meticulous subtlety of its application, viewers became inadvertently immersed by the colouring and subsequently enveloped by the work itself.

This utilisation of the tangible, physical features of the gallery space is echoed in Vermeersch’s third solo exhibition at the Carl Freedman Gallery, a varied presentation of minimalist work that delicately balances unity and fragmentation in order to posit a rumination on time’s various guises. Walking into the gallery, one is greeted not by a conventional white cube, but rather a disjointed arrangement of white, yellow, black and blue. A testament to the artist’s attention to detail, each individual colour is allowed to grow to 25% of its full tone, only to be cut by a straight vertical line that divides the wall in two. It is an effect that, like that of Untitled (Blue 0-100%), is as curiously disorienting as it is painstakingly simple. Through a 2D application of paint, Vermeersch contorts the gallery, simultaneously splitting the 3D walls, leading the viewer to reassess where its true corners lie, and uniting the space, redefining it as unique, connected and harmonious – less a temporarily occupied gallery space, more a permanent, secure museum.

In contrast to his 2011 project at Londownewcastle, however, two bodies of original work hang on the spectral walls, interrupting the flow of the directly applied paint. The first of these is a series composed on rectangular cross-sections of polished marble. The organically formed strands of the stone intertwine, correlate and divide in an intricate polyphony; the separate lines reading like aerial photographs of dried rivers. Interspersed among the continuity of these granite plates, Vermeersch introduces spontaneous, very human brush strokes of crudely mixed oil paint. These marks of red, yellow and blue are an attempt to open a dialogue with the very stone on which they are painted. For while the immediate dashes of oil disclose an extant separation – a divide between the organic tracks of recrystallized carbonate mineral and the physical manifestations of human expression – they also redefine and, to an extent, reanimate the stone itself. The marble, a relic of times past, is drawn into the present, and reciprocally the paint marks become interlaced with the annals of history.

This interrogation of the malleable state of time through the marrying of the human and the natural is again perceptible in Vermeersch’s secondary set of works. Initially, these two larger canvases appear to be hyper-minimal, abstract paintings; subject-less voids of space recalling Jules Olitski’s sunburst panels or Barnett Newman’s imposing sections of colour. The twin canvases delicately fade in and out of shades of grey and silver, occasionally hinting at the introduction of a less monochrome tone, but finding no point of resolve.

Behind what seems like pure abstraction, however, lays a concealed realism. The composition process involves Vermeersch taking photographs of skies at sunrise or sunset, at the delicate moment of changing light that occurs when the sun falls below the horizon, printing the photographs in negative and then meticulously replicating them in paint. It is a protracted and assiduous procedure, but one that ultimately creates serene melanges of colour that concurrently exist as abstract fields and direct facsimiles of realist images. In consequence, these final compositions come to resemble the marrying of stone and oil in the marble works. Vermeersch is creating a compound of old and new, of fleeting and permanent and of natural and human. As with the spectral uniting of the gallery walls, he is finding within the fragmented a means to a unity, a reciprocal and harmonious relationship between seemingly disparate entities and concepts.

While the presented works have outgrown the blanket applications of colour that up to this point have defined his practice, it is still what Vermeersch leaves unsaid and chooses to conceal that elevates his work: the interrogation of time and human influence that is hidden behind the facade of pure abstraction, the reconstitution of the night sky that is swallowed by the canvases, the reforming of the 3D gallery space via a 2D application of paint. It is the dedication to, and the mastery of, saying something less. The exhibition simultaneously presents so little, and so much, a paradoxical demonstration of the profound, affecting power that minimalism can possess. 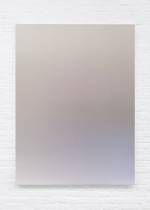 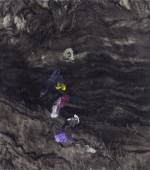 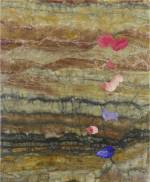 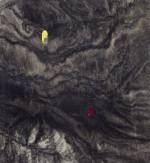 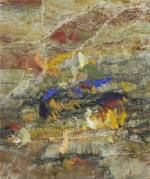 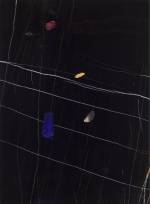 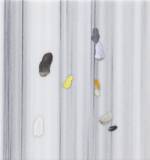