Guy Yanai: ‘Every work that leaves my studio is part of an inexhaustible autobiography’

Guy Yanai: ‘Every work that leaves my studio is part of an inexhaustible autobiography’

The Israeli artist Guy Yanai explains the stories behind the bold, colourful oil paintings in Speak, America, his solo exhibition in New York, and talks about being influenced by Vladimir Nabokov, David Hockney and Matisse 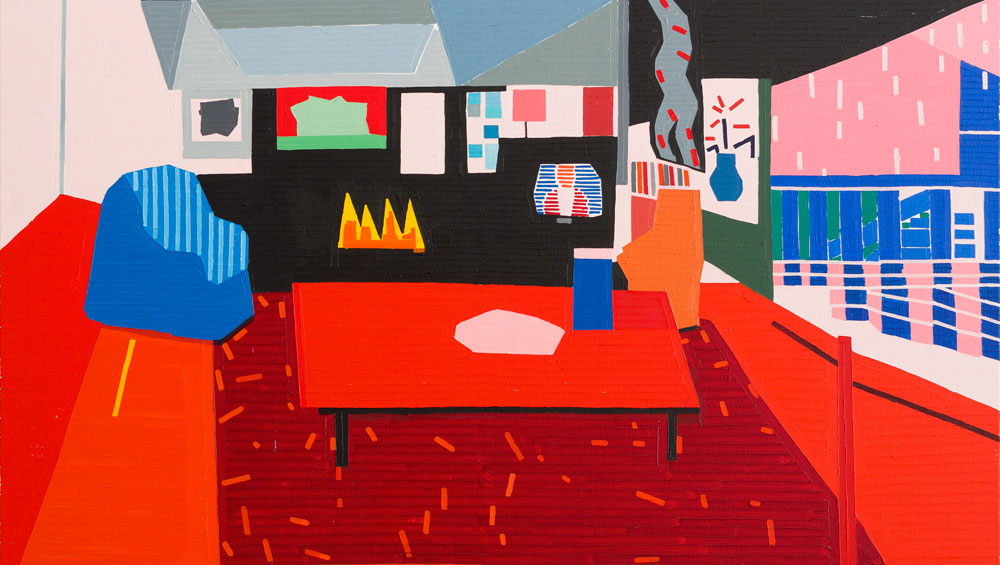 Guy Yanai’s solo exhibition at Ameringer McEnery Yohe in New York takes its title from an unwritten book by the Russian-born American novelist Vladimir Nabokov. When Nabokov moved to Europe in 1961, to live at the Montreux Palace hotel in Switzerland, he planned to write a sequel to his celebrated autobiography Speak, Memory. It was to be called Speak, America. The book, however, was never written, and Nabokov died in 1977 leaving behind the “shell” of an unwritten, autobiographical sequel. 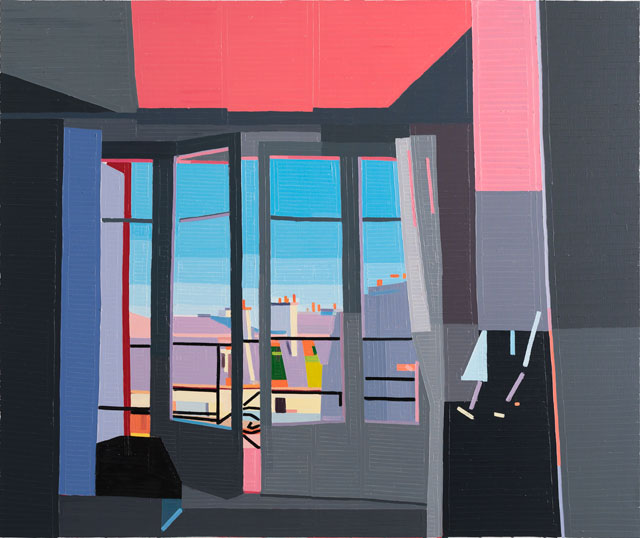 Using Speak, America as a shell for his work, Yanai captures his own memories and experiences through painting, honouring the work of Nabokov while imprinting his own autobiography on to the author’s unwritten text. Tel Aviv, Brussels, Amsterdam, Los Angeles, Worcester – the gallery is filled with bold, colourful oil works, each with a story behind them. I spoke via email to Yanai, who was born in 1977 in Haifa and now lives and works in Tel Aviv, to find out more about the influences, Nabokov and beyond, that have fuelled his most recent works.

Cassie Davies: Speak, America, the title of your exhibition at Ameringer McEnery Yohe, is an allusion to Vladimir Nabokov’s autobiography, Speak, Memory. What is it about his memoir that resonates with you?

Guy Yanai: Yes, the title reflects Nabokov’s powerful and haunting autobiography. It was this specific book, rather than his whole oeuvre, that captured me. I’ve had this book for many years and somehow it always resurfaces, again and again. I keep returning to it, and it keeps resonating with me. Nabokov moved around all his life, from Russia, to the UK, to America, eventually settling in a hotel in Switzerland, the Montreux Palace, until his death in 1977. His movement between different countries during his lifetime also resonates with me. 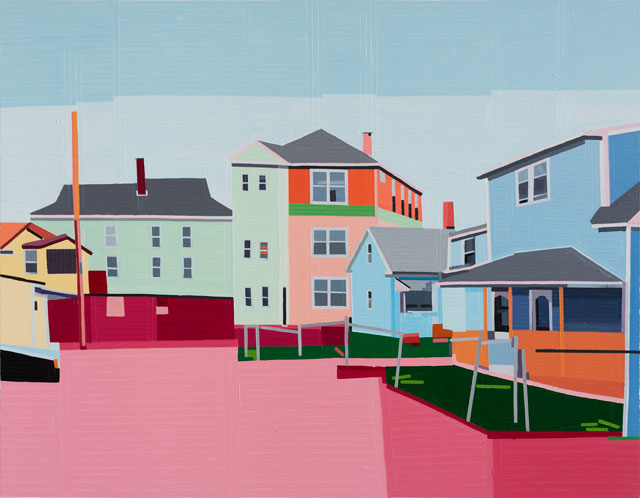 When I was younger, I read all of Alberto Moravia’s work. I got the impression from his writings that he never left Rome and Italy, but then I read his autobiography, which came out the day he died in 1990, in which he talks about all his travels. It’s extraordinary. In order to see Italy so clearly, as Moravia did, he had to leave and see the world.

Nabokov wanted to write a second volume of Speak, Memory called Speak, America. At that time, he was living in the Montreux Palace. From there, he could see all his experiences clearly, from the outside, as Moravia was able to when he left Italy. Sadly, Speak, America was never written. So, in a way, I used Nabokov’s unwritten sequel to his autobiography as a shell for my work, both to impose my own experiences and to honour this unwritten work.

CD: Memory is an important theme in Speak, Memory. What is it about memory that interests you? Do you see a relationship between memory and painting?

GY: One of the most beautiful things that weaves through our lives is memory.

When I was younger, I didn’t want to deal with identity or any kind of personal experience in my work. I preferred to deal with geopolitical situations, old modes of government, ancient cultures – things that had a very indirect presence in my day-to-day life. 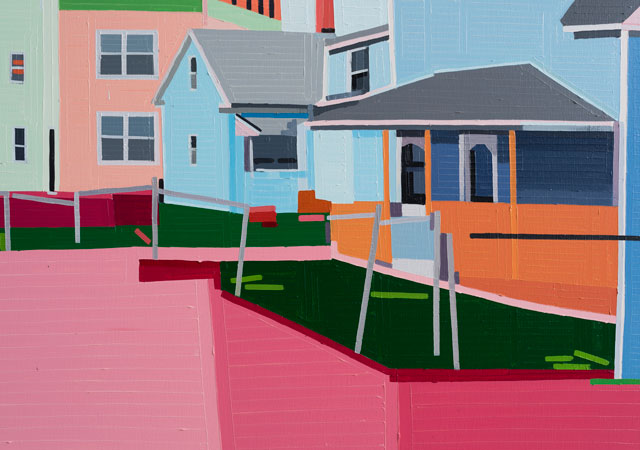 In 2009, I had a little show in Tel Aviv called Political Science. After it opened, I went to a strange residency in a barn in upstate New York that Zach Feuer had set up. It was for two or so months, an annoying period of time in which you can’t really do anything substantial, yet you can delve deep in to certain areas. I ended up cutting paper in to different sizes and painting whatever I felt like: my laptop, a book, Hafez al-Assad [president of Syria 1971-2000], Bashar al-Assad [the current Syrian president], mosques, a hot dog, a deer – anything that came up to my consciousness. After two months, I had about 80 of these paintings. They weren’t very good, but they opened a door.

With my most recent show, Speak, America, I wanted to explore memories that I hadn't pressed on for a long time. I painted the house where I moved to from Haifa in 1984. It was a very normal suburb but, coming from Haifa, it was exotic and strange. To have a driveway was a huge luxury. Then I painted memories that I had not experienced, like the painting Los Angeles, which is a transcription of a small and brilliant watercolour that David Hockney did in 1982. His watercolour always seemed so foreign to me and I’ve transcribed it a few times in the past six or seven years. I feel as if the variations that I can do with Hockney’s watercolour are endless and, through his art, I form my own experience – like a DJ remixing a song, creating new memories.

In the past few years, memories, and the notion of possessing those memories, has been a large part of my practice. Painting can really transform the pictorial qualities we have of memories. It’s a kind of alchemy. So, yes, there is a beautiful and poetic relationship between memory and painting.

CD: So, for you, painting is a way of creating your autobiography.

GY: Every work that leaves my studio is part of a large, inexhaustible autobiography. Each work captures a different experience; even the holes between each experience, each painting, fascinate me. 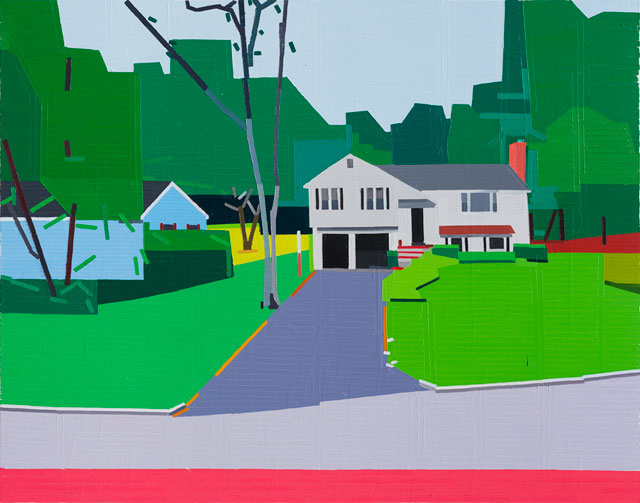 Fox Hill Road is the street I grew up on from 1984 to 1989. Worcester is the name of a scary town near where I grew up. Los Angeles, as I mentioned before, is the name I gave a remixed Hockney watercolour from 1982. Paris (Rue de Normandie) is the interior of my girlfriend’s apartment in Paris. Brussels is a bathroom window in Brussels where I was staying during Art Brussels. Amsterdam is from when my mother, my son and I walked around Amsterdam before an opening I had there. Tel Aviv is my balcony, looking east.

So, like a run-on sentence, the show is simply my life, travelling for shows, fairs, love, family.

CD: Your paintings have a digital, pixelated appearance, made up of blocks of colour. Fox Hill Road is a combination of multiple shots sourced from Google Street View. Can you explain the influence technology has had on your work?

GY: I use everything I can, technology, but also ancient mosaics, needlepoints – anything that can help me create a great painting. The “post-internet” label doesn't make sense for my work. It would be like a fish thinking about the water. The internet is around us all the time, so I use it, and I love it! That people have this strange nostalgia and refuse to use the tools around them seems silly to me.

With Fox Hill Road, I really wanted to paint my old house along with my neighbour’s house – the Ruthfield family house. Their house was a real part of our house since we were very close to them. So, I had a few options to paint this. I could fly there, I could ask someone to go there and film the street and take multiple shots, or I could go to Google Street View. I thought it was amazing to capture it from Google Street View. It was a decision that came from limitations. I love iPhones, Instagram, I love it all; just like I love New York’s Metropolitan Museum of Art, ancient mosaics, archaeology museums and early renaissance paintings.

The thing about 2017 is that we can do anything. Now, the main part of being an artist is the editing – “What do we do?” rather than “How do we do it?” I rest on the shoulders of Jean Luc-Godard and John Zorn, who have embraced incoherence as a way to make coherent structures that resonate with life.

CD: There are several paintings of potted plants in Speak, America. I would love to know more about your ideas behind this series.

GY: Potted plants don’t have a mother or father. They are a vehicle for me, on which I can imprint anything I want. Strangely, for these works, I almost only work from iPhone pictures. It’s very addictive to paint them. I almost stopped a few years ago, but then I just kept on doing them. I like the idea that you can take a piece of nature and impose humanity on it, by placing it in a pot, a terracotta pot, in anything. You domesticate it. It’s kind of nice, I think. I rarely paint trees that are planted in the earth: for some reason, I find that much harder.

Usually, I like to have “nothing” around the potted plant – meaning, no notion of a specific place, just a painterly space that formally works with it, but nothing that can be recognised as a specific place. It just feels right. Iterations of these plants are also endless and inexhaustible. Every little thing can be used – shadow, light, even dead areas of the plant now excite me as I can add a yellow, or a dirty colour, or a Naples red. 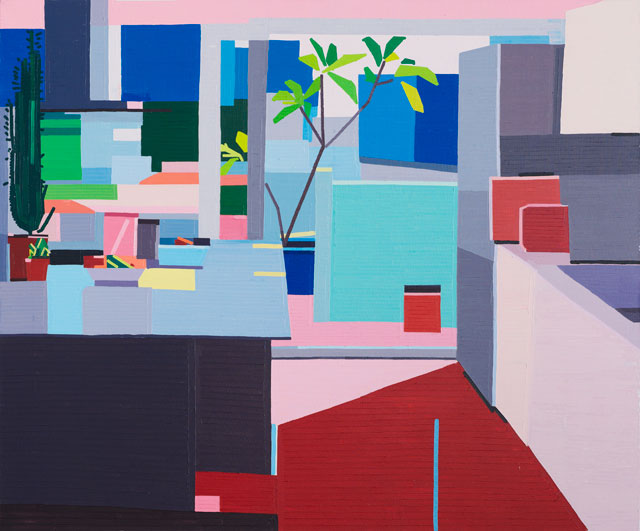 CD: One of your potted plant paintings, Hero (For Marie Pierre Chauve), has a beautiful, sentimental narrative behind it. Can you tell me more about this piece?

GY: There is a certain drama to this work. Years ago, in 2008, I think, I was kind of sad and depressed. I flew alone to Nice to see the Vence Chapel by Henri Matisse. This was before iPhones (or at least before I had an iPhone), so when you travelled alone, you were alone. The first morning, I drove to Vence from Nice and, lo and behold, the church was closed. So, instead, I went to the Maeght Foundation. Later that afternoon I went to the Matisse Museum in Cimiez (the upper hills of Nice). It was so beautiful, although I had the feeling that the people of Nice were too close to Matisse to understand him. I walked around the area looking for the Hotel Regina, where Matisse lived in Nice towards the end of his life (he split his time between the Villa le Rêve in Vence and the Hotel Regina). The Hotel Regina is now a private residence, so it was locked. I managed to sneak in to the lobby and saw these amazing plants. After a few conversations with the residents, I learned that these plants are more than 100 years old and were around when Matisse lived there.

About a year ago, I was looking for pictures of these plants, as I had lost all of mine. I asked people on Facebook if anyone was around Nice, but I got no replies. Then Aurore (my girlfriend) asked her father, who was living in Cannes. He gladly went and sent me these incredible high-resolution pictures of the lobby and the plants. The next day I called him my hero. Sadly, he passed away a few months after he sent me these pictures, so this work is dedicated to him.

CD: Are there other historical art figures, such as Matisse, who have inspired you?

GY: Matisse always said that Paul Cézanne is the god of painting. Well, for me, Matisse has surpassed Cézanne because he went beyond nature in to pure synthetic qualities.

Historical figures have had, and always will have, a massive influence on me and my practice. Massive. Piero della Francesca, Giotto, Fra Angelico, Gustave Courbet, Piet Mondrian, Philip Guston, Willem de Kooning. But, in the past five years I have been “looking” more at film, music, literature and fashion. The sources of inspiration for my work never ends. 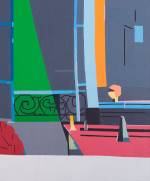 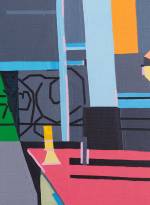 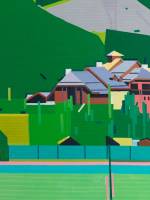