In a hulking presentation at Gagosian, the painter laureate of putrefaction continues to moulder old masterpieces into pestilent husks. To what end remains elusive 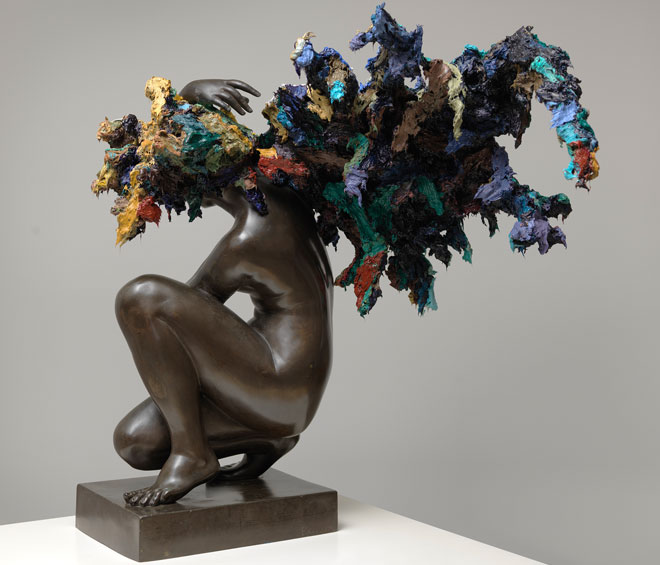 Glenn Brown. Let me ferry you out to sea To see who you could have been When time comes to row back in You’ll be in the place you should have been, 2017. © Glenn Brown. Courtesy of the artist and Gagosian. Photograph: Mike Bruce.

In Cymbeline, when the noble Guideriussings after beheading the knavish Cloten, he gently beckons his enemy to “come to dust”. When the British artist Glenn Brown (b1966) titles an exhibition at the Gagosian with the same three words, they instead feel like a command, rasped from beyond the grave in a Hammer horror film.

Brown is chiefly known for his paintings, which inhabit the overlap between the macabre and the kitsch. He pilfers imagery from the history of art and mutates it into unsightly abominations. The child in Daydream Nation (2017) would be at home preserved in the Catacombe dei Cappuccini, while the headless figure in Passchendaele (2017), taken from a Delacroix male nude of a heroic build, becomes a pustulous cadaver. Brown also makes sculptures, created by flinging thick gobs of oil and acrylic over pre-existing structures. The resultant forms, which often bloom out of imitations of academic bronzes, have the stickiness of a disease and the nauseous palette of a children’s television studio; I admit to finding them hard to look at for more than a few moments. Everywhere in Come to Dust there is the stench of decay. Festered, mouldered, putrefied, decomposed: it has become customary for descriptions of Brown’s work to be peppered with these near-synonyms. 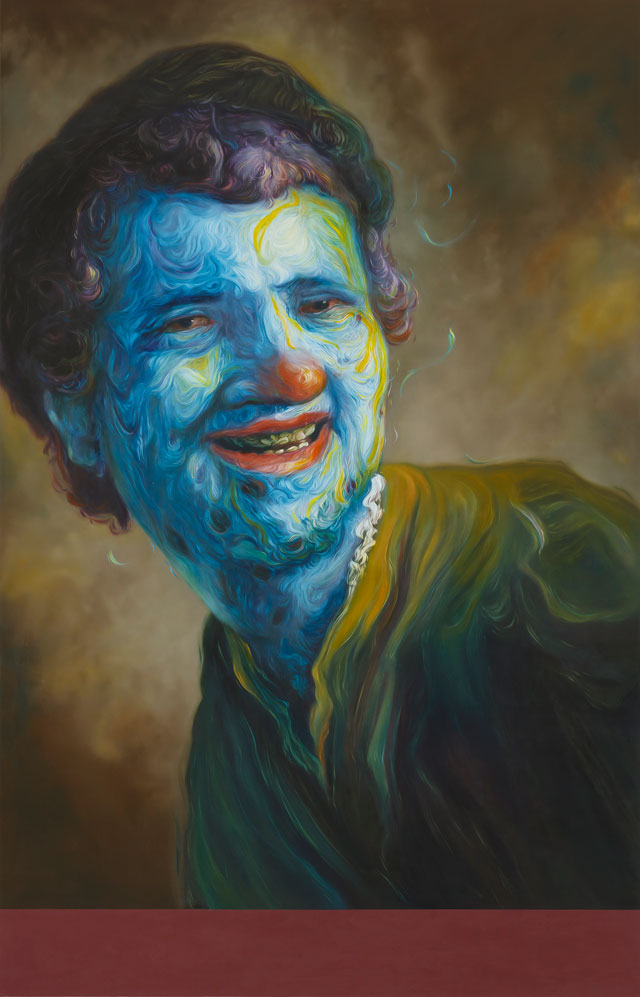 The luridly coloured oil paintings and sculptures of Come to Dust follow the template of what came before. But the new exhibition also features drawings, etchings and grisailles, mediums that have only recently been added to Brown’s practice. There are 60 works in total, the earliest of which date to 2016, and this mass makes the exhibition feel less like a gallery show and more like a demonstration of the artist’s range.

With its loan-heavy, frequently fantastic presentations of, for example, Pablo Picasso, Michael Andrews, Alberto Giacometti and Yves Klein, and Cy Twombly, this Gagosian is the London gallery that has most often felt like a museum. For Come to Dust, it has been reconfigured to look like one, too, with its cavernous airy white cubes replaced by a suite of blue-walled chambers unmistakably modelled on the subterranean temporary exhibition halls of the National Gallery. Brown’s panels are thus hung in the facsimile of a space that has hosted Da Vinci, Rembrandt, Goya and the Caravaggisti. Many of the works are sheathed in period frames, listed as an integral component alongside the paint and the panel, and so, as objects, evoke the old masterpieces they transform. It is an impressive presentation. 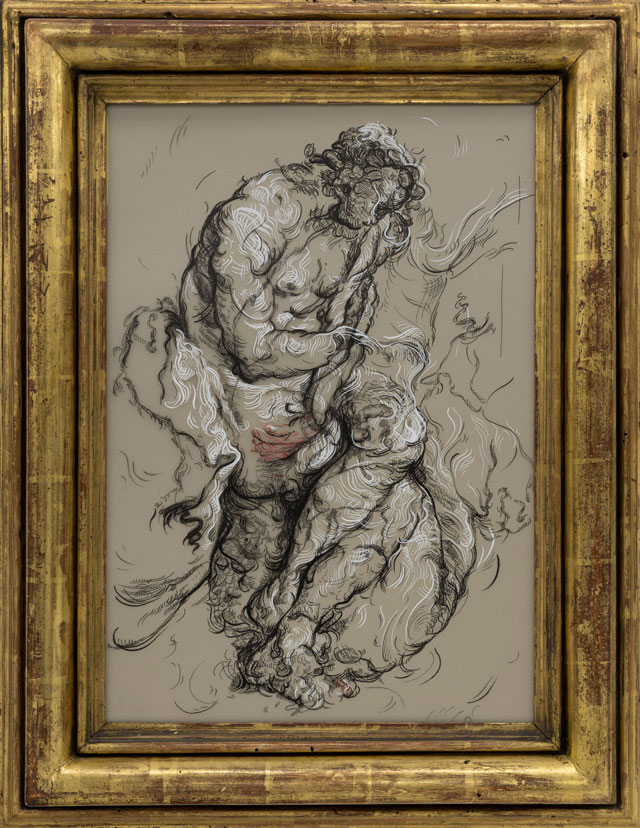 Brown’s method has remained the same throughout his career, although his subject matter has broadly altered. Early on, he reworked retro sci-fi book covers – a practice that led to two plagiarism lawsuits – and modern masterpieces such as Frank Auerbach’s portraits of JYM. Since 2003, however, he has, by and large, stuck to pieces originally produced between the Renaissance and 19th-century realism, well out of the reach of copyright. After choosing a piece, he acquires a poster or print. Then, initially using a Xerox machine but more recently employing Photoshop, Brown edits the image, shifting the scaling, shape, orientation and colours. He then reprints the altered piece and paints atop it, finishing with a coat of tinted varnish. A completed Brown is thus a painting of an edit of a digital reproduction of a print reproduction of a paintings, connected to its original source by a viscid ectoplasmic chain; his drawings in Indian ink and acrylic, begun in 2013, are created through the same process. 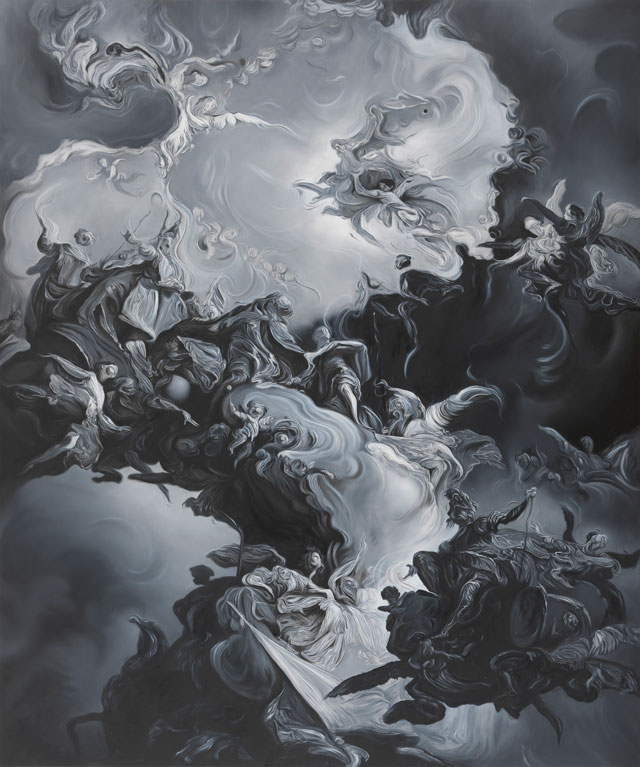 He is far from the first artist to play this sort of game. The use of appropriation in art stretches back as least as far as Duchamp’s readymades and the cubists’ use of newspaper cuttings in their collages. In the 1980s, the likes of Sherrie Levine and Sturtevant built careers out of replicating and recontextualising other artworks, whether through rephotographing photos or creating uncannily accurate simulacra of fellow artists’ output. Brown’s procedure also belongs to the contemporary revival of figurative painting, and, in particular, a strand that focuses on revitalising the painterly techniques of past masters. Pioneered by figures as distinct as George Condo and John Currin, this tendency encompasses several of the most fascinating, diverse and dynamic artists working today.

Brown’s practice hovers at the crossroads between these approaches. He changes pieces too much for his work to be classed as pure appropriation, yet his art is tied too closely to specific precedents to be fully in the camp of technical revival. And there are particularities to Brown’s process. Although, from afar, one might assume his pieces would be deeply layered, close up his finished paintings have an unexpected flatness. The idea that the brushstroke is an essentially expressive unit is refuted, and every feature is given the same textural prominence. In his spatial distortion of old masterpieces, he also repudiates Renaissance conventions of perspective. His is a figurative art organised along the lines of an abstract painting, with the physical plane of the canvas taking priority over perspectival verisimilitude.

This is a neat trick. On first exposure to a Brown painting, it is liable to repulse and beguile one in equal measure, provoking an instant reaction that cannot be dismissed. But when confronted by threescore applications of it, the trick reveals itself to be just that, a gimmick. In the catalogue for Brown’s capacious 2009 retrospective at Tate Liverpool, Christoph Grunenberg, then Tate Liverpool’s director, speaks of the artist’s “aesthetic perfection, masterly technical dexterity and formal integrity”, and Brown is clearly a talented draughtsman. And yet, when viewed close up, each of his paintings dissolves into the same swirl of watery tendrils. This swirling, marbled style quickly becomes wearying. 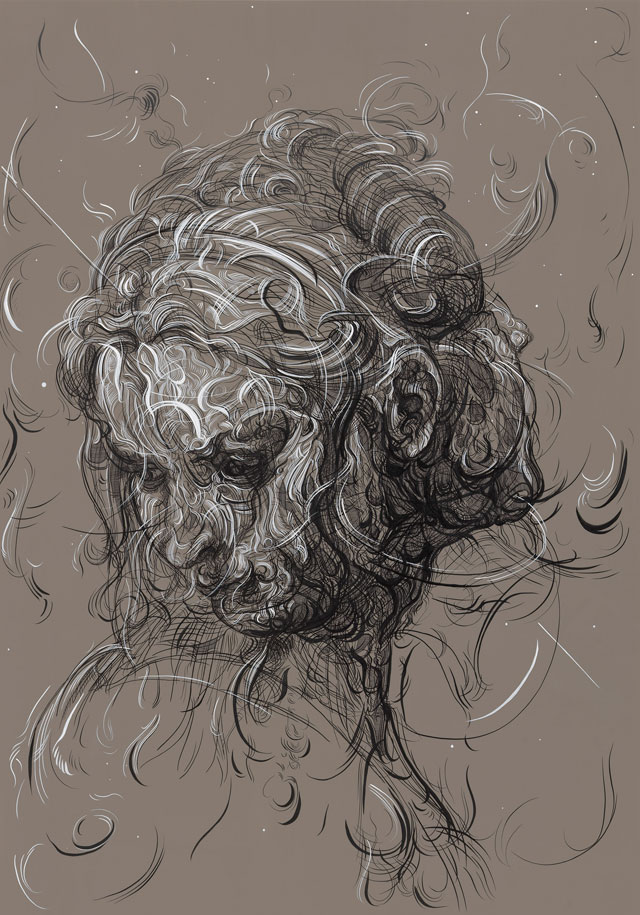 The graphic works, composed of wispish, almost calligraphic strokes, have more obvious technical interest. The Music of the Mountains (2016), which overlays heads from Raphael and Guido Reni, has a sort of gleeful virtuosity; Drawing 15 (after Snyders) (2017) remakes a snarling dog by the Flemish animal painter into a furious bundle of motion. But overexposure makes the heart grow indifferent, especially as many of these pieces come off as simply greyscale versions of the paintings.

Art that draws so explicitly on its forebears is assumed to be engaged in some sort of dialogue with art history. Brown’s work is less a conversation than an unheeded heckle. A trio of paintings in Come to Dust are remakes of the same Rembrandt self-portrait. They reverse its alignment, distort its scale, render the face in a sickly blue pallor and add the red lip and nose of a clown. I don’t think these three have anything to say about either Rembrandt or their own deliberate ugliness. Their titles – Poor Art (2016), after Arte Povera; Unknown Pleasures (2016), after the Joy Division album; and They Slipped the Surly Bonds of Earth and Touched the Face of God (2017), from Ronald Reagan’s contraction of the minor aviator-poet John Gillespie Magee Jr – may provoke a laugh, but seem as if picked purely for easy provocation. Perhaps the point is that the original works belong to the mangled morass of cultural history, from high to low, graceful to garish, but this is a point that has been made repeatedly by postmodernists, and has itself come to cliche. On leaving Come to Dust, I wondered if the physical flatness of Brown’s work might not be a wry comment on his practice’s own flat monotony. 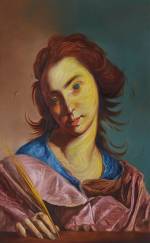