With references to the Fibonacci sequence and the golden ratio, Griffa’s paintings are works to puzzle out and ponder 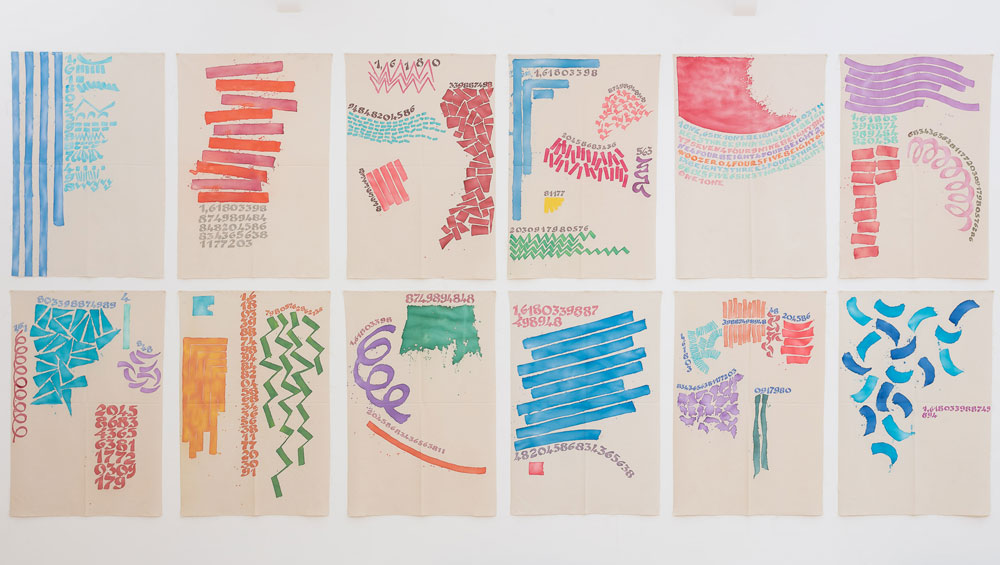 “Painting has inside it the story of humanity, the story of that part of humanity that is not visible. Life goes beyond the border of reason, and painting records that history.” With these words, from an introductory conversation for this exhibition with Camden Arts Centre curator Martin Clark, Giorgio Griffa lays out why he is a painter, why he never gave up his love for paint and brush and gesture, even when it excluded him from the arte povera group in Turin, of which he was – socially and spiritually, if not methodologically – a member. It also reveals why his paintings are so full of space, so seemingly unresolved. 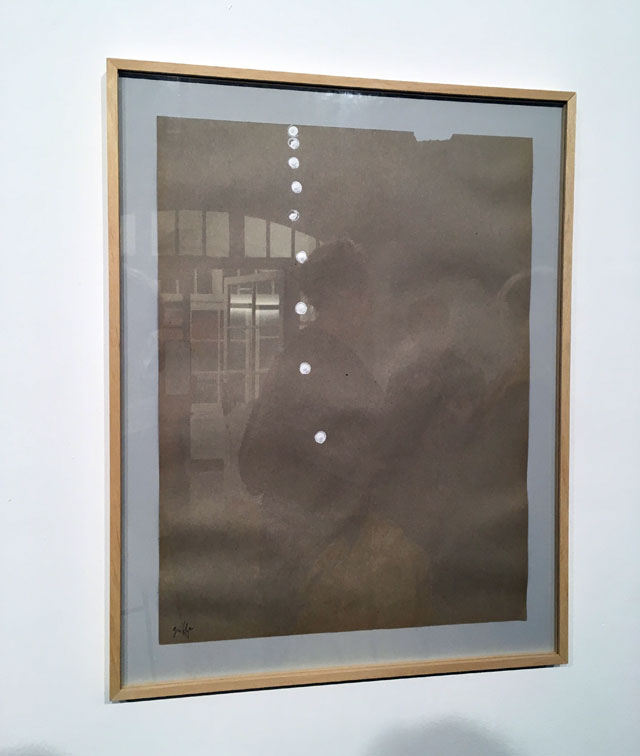 Griffa (b1936, Turin) is as interested in representing the space around the gestures as the gestures themselves. This impulse is declared, with great flair, simplicity and spontaneity, in one of the first pieces encountered in this Camden Arts Centre retrospective: Paper (1968), a single cascade of white tempera blobs descending a piece of brown paper. Staring at the rhythm and spacing of these blobs – each lower blob twice as far from the previous one - I realise, with a jolt of pleasure, that they are describing the Fibonacci sequence (in which each number in the sequence is the sum of the two numbers that went before), so beloved of Griffa and his arte povera pals.

The sequence’s close kinship with the legendary golden ratio is also very much present here, in its numerical expression 1.618034… and so on, ad infinitum. This number appears often in Griffa’s seemingly vast Canone Aureo series (which translates, unsurprisingly, as golden number or ratio), which fills Gallery two, displaying work from the 1990s onwards. In both numerical and written form, these numbers are sliced and diced, woven in with patterns, stripes and curls, whorls and triangles. It is a cosmic collage of empty space, mark-making and glorious, saturated sorbet colours – orange, lilac, pink, red, yellow, blue – the acrylic pooling into the fibres of the untreated, unstretched canvas on which Griffa likes to paint.

Paint and pigment are the intelligences to which Griffa’s art is in service, even though his arte povera peer group had rejected painting as bourgeois, traditional and too representational. He told Clark: “To paint has always been my work. I cannot do a different thing.” So while he knew this placed him on the outside of the group, he still drew on its fundamental tenet: that the artist is in service to the materials, “the intelligence of materials that is everywhere”, as he said at the opening. “For me, there is only one material intelligence: the colour. I am choosing the canvas. It is a living process (and) there is spiritual intelligence. Painting is not a natural thing. It is done by man to conserve memory – 30,000 years of memory. So for me it has this presence in itself.” 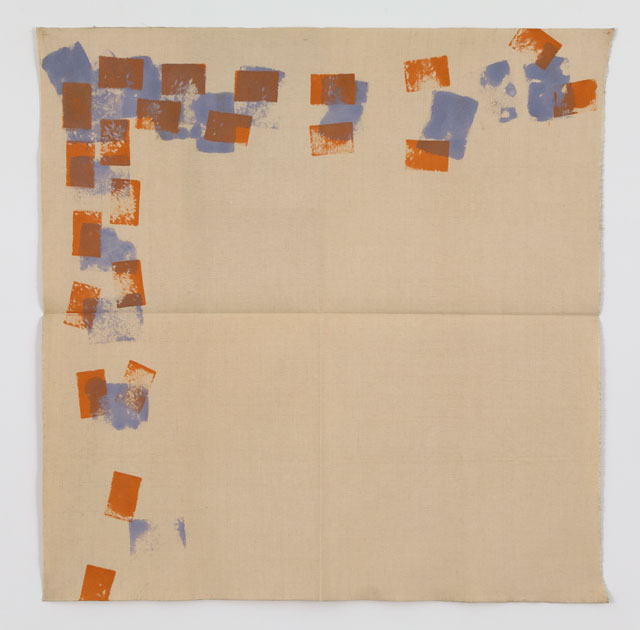 That presence makes itself felt in the performative quality of his work: there are no preparatory drawings; he starts with one mark and the rest follows. The rhythms are clearer, cleaner, more direct in his earlier, 60s and 70s pieces, in Gallery one. The kind of dancing, choreographic translation of this method is vivid in works such as Spugne (1969), where single then paired ochre sponge prints jump up the left-hand margin of the page and across the top, like the exuberant hopping game of a child or the play-fighting of a young pup. A larger purple sponge print emerges between the ochre ones, as if to represent the air or spirit that is being moved, or the rhythm that triggers this movement. Obliquo (1979) expands and elongates this dance, in two-stepping, dynamic stripes of indigo and blue.

Unsurprisingly, with so much evident rhythm in his art, Griffa loves to work with music. There is a playlist thoughtfully provided in the reading room, which reveals a surprisingly conservative, classical tendency – Bach, Mozart, Handel, Monteverdi, Scarlatti, with just a few from more recent centuries (Prokofiev, Chopin, Shostakovich). Clearly, the man likes a bit of modern minimalism – he has also named one of his Canone Aureo works after Philip Glass. Either way, it is a nice intervention – to think of Griffa channelling those ancient memories while listening to Mozart or Chopin - music of light, staccato rhythms and graceful glissandos – or Glass’s meditative musical perambulations. 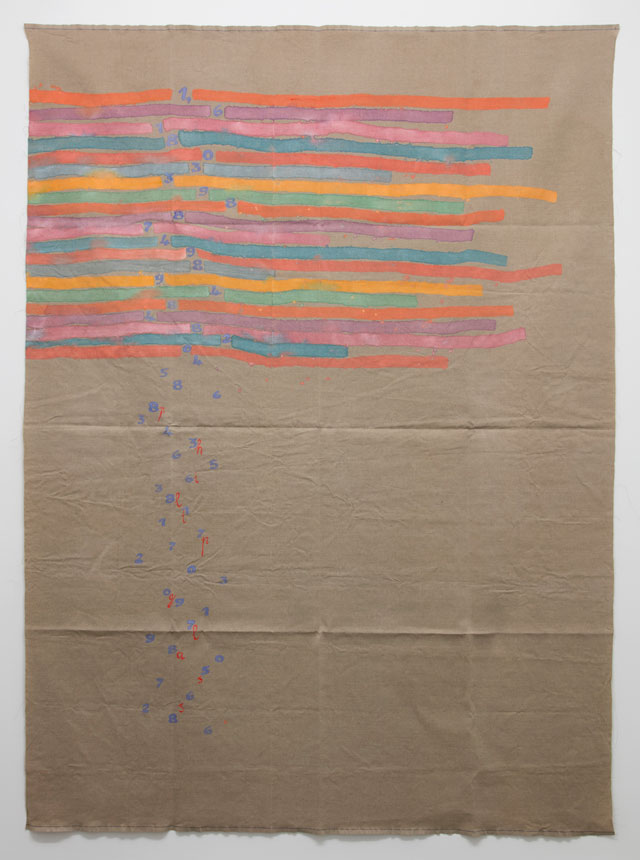 Griffa said at the opening: “Time and space for me are together. When I work, I go to do a rhythmic work, as man goes to respond to the rhythms of the day and night and the seasons. With these rhythms, I go inside space and time together. And my work doesn’t arrive at the end of the fabric because I would like to have this suspension through which we conserve the sense of time.”

In many of his later works, there is an exuberance, a lilting extravagance, a richer collection of marks added to his earlier stripes – zigzags, curlicues and densely clustered or waltzing, elongated whorls, accompanied by those numbers whose presence might suggests a code to those with greater mathematical insight than myself. In his Tre Colori (1998), a blue number one abuts a strip of blue zigzags; a salmon pink two sidles up to the same coloured fat verticals; a sherbet pink three nestles under a correspondingly pink line of whorls along the bottom. But each work uses the numbers differently, keeping whatever code they may be hinting at to themselves. 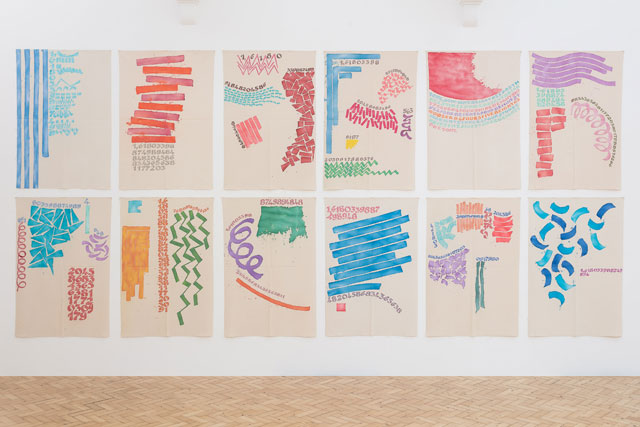 On the wall full of Canone Aureo works on paper, in Gallery 3, the collaging of numbers and marks can appear like the fevered working out of a mathematical problem, a cosmic equation that is far more pleasing to the eye and subliminally satisfying than any professorial, blackboard scratchings.

These are works to puzzle out and ponder – even if at times to no avail. Stare as I might, I could discern no particular logic or order to the huge piece stretched across the wall in gallery 3, Lavagna Beuys (1982). One of several works to pay tribute to those who have inspired or paved the way for Griffa (Joseph Beuys, Agnes Martin, the aforementioned Glass), the knowledge of its dedicatee does nothing to help me decipher its puzzling choreography. I am also left unmoved by the fragments of striped fabric strewn, like confetti, over the adjacent walls, in Frammenti (1980). 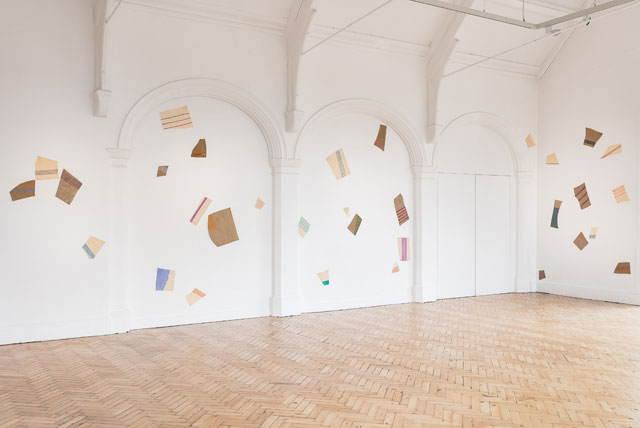 The works are most viscerally, deliciously enjoyable, for me, where they trigger memories of music, of movement, of spaces, or patterns – like a retinal after-image - seen in nature, or perhaps places of worship. Griffa has said his colour palette is inspired by Italian frescos, and he repeated this assertion in the opening conversation: “I don’t have a theory of colours. The colours I use are probably (from) the memory of a child. I have grown up in memory of Italian frescoes. I think that quite precise memory comes from Venetian painting, but I never search for it.”

Most exciting – emotionally, visually – are those that combine that sublime Venetian palette with patterns from nature. For example, Canone Aureo 868 (2014), which, despite its Fresco-ish, Refresher hues, evokes the translucency and patterning of riverbed stones, settled into their grooves over centuries, as seen through water; or like geological mapping marks, they shimmy together across the canvas, underpinned by a cheeky little string of Euclidian numbers.

With the crease-marks visible from the works’ folding and refolding, there is a spirit of provisionality, domesticity even, which chimes with the sketchy quality of some works. Marks and lines lurk at the lower edges or sides of the fabric, or hop from one piece of cloth to another, as if resting only temporarily in that place – an effect that brings to mind the quote of Griffa’s that gives this exhibition its title. In explaining the unfinished or incomplete quality of his works, he has said: “It is a continuous becoming, from one canvas to the next.” 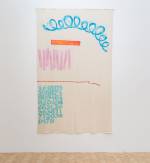