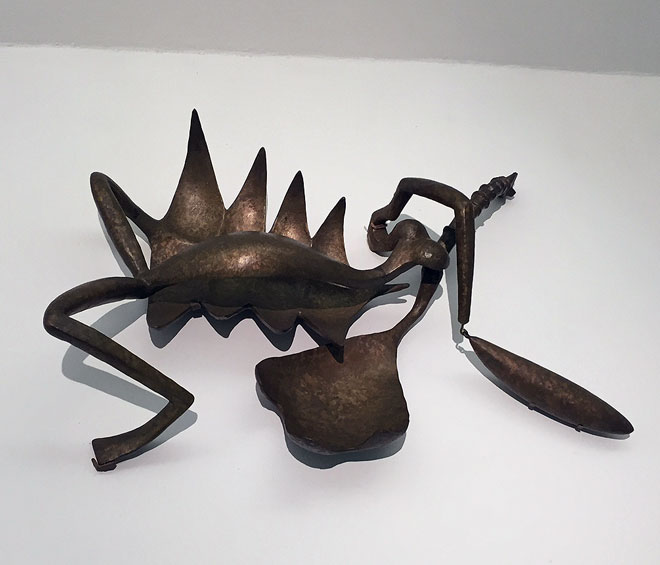 Giacometti. The show’s title says all and yet is deceptive, because the exhibition presents as a survey, but is actually a discovery. To give the Guggenheim closure on the artist it had embraced when he was famous for breaking moulds and is now famous – by measure of three of his bronzes being the most expensive sculptures ever sold – for being famous, Giacometti’s well-combed career is laid out as biography, deftly addressed chronologically with the highlights of each medium and aesthetic he mined. 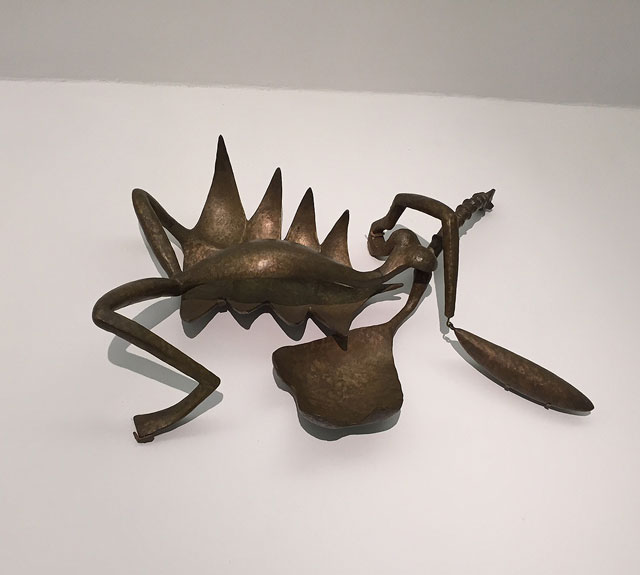 Staging fame is tricky, unless the parameters are wide enough, as with Picasso’s life-output, to offer limitless possibilities for fresh thinking. In contrast, the focus of Alberto Giacometti (1901-66) narrowed down. Having moved from his native Switzerland to a heyday Paris of unbridled artistic innovation, the young artist had cast his net wide. Through the late 1920s and early 30s, his restless talent mastered in turn the visual vocabularies of cubist, surrealist, oceanic, Cycladic, African and Egyptian art, and the highpoints of each are lined up like a primer on the ramp’s first incline. Here are the creepy Disagreeable Object (1931), the enigmatic Suspended Ball (1930-31) and the frightening Woman With Her Throat Cut (1932) – the scandale of its jour. 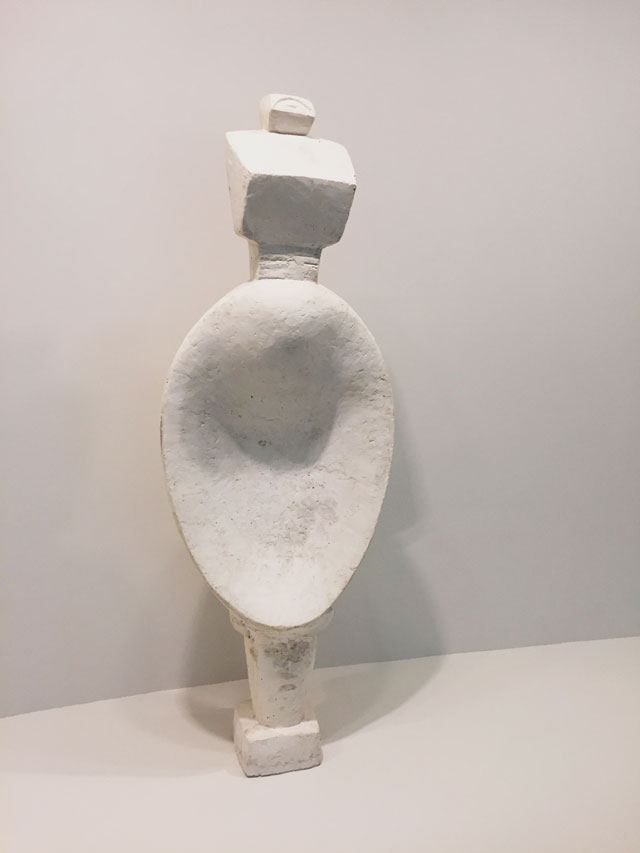 And here, together with his accomplished drawings and paintings, Giacometti’s contribution could have settled, his seduction of Paris secure and his place on the international stage guaranteed by his lasting influence on such next-generation luminaries as Louise Bourgeois and Francis Bacon. With Spoon Woman alone (1926), drawn from the West African Dan people and shown here in two iterations to mark it as symbolic of a career already well established, Giacometti might have rested on his laurels, but for the trauma of the second world war, which shattered his personal bohemia with the daily horror of torn limbs and starved bodies. Shorn of all passion but for the human condition, the artist settled into an investigation of its essence that filled his 14ft by 16ft studio with cigarette smoke, gypsum dust and a murky palate of oil paint. 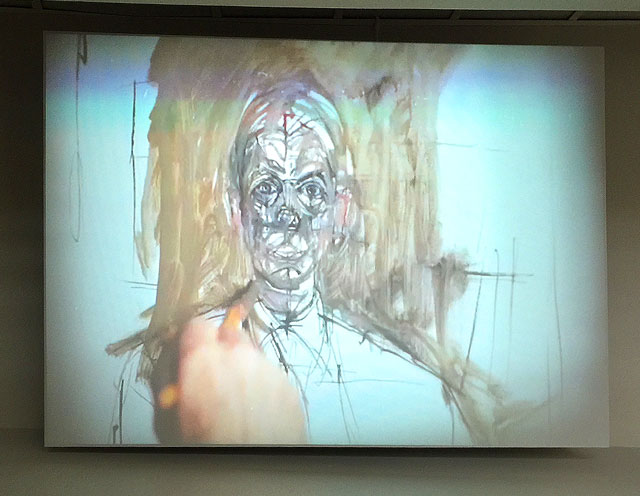 To give form to an overwhelming existential angst, Giacometti abandoned his intellectual forays into aesthetics, fell back on pen and brush (the basso continuo of his work past and future) to take the notion of a likeness to wrenching extremes and, to flesh out his new vision (here the exhibition’s sublime contribution), honed in on plaster. Plaster handled like clay had served him well for the smooth planes of his early work, presenting like marble when given a creamy patina with paint, but the raw surfaces of primal plaster (his, a composite of sand, water and gypsum from the hills of Montmartre) offered more. Although as perishable a material for sculpture as is watercolour for painting, plaster was not only cheap and plentiful but, for the perilously irregular surfaces he now sought, endlessly malleable and largely forgiving. As he told it, Giacometti never did exhaust its infinite possibilities for exploring the existential – even after joining the art pantheon as a one-metaphor artist (as had Chaim Soutine for flayed carcasses and Modigliani for reclining female nudes), preserved in the amber of the bronze silhouettes he cast later. 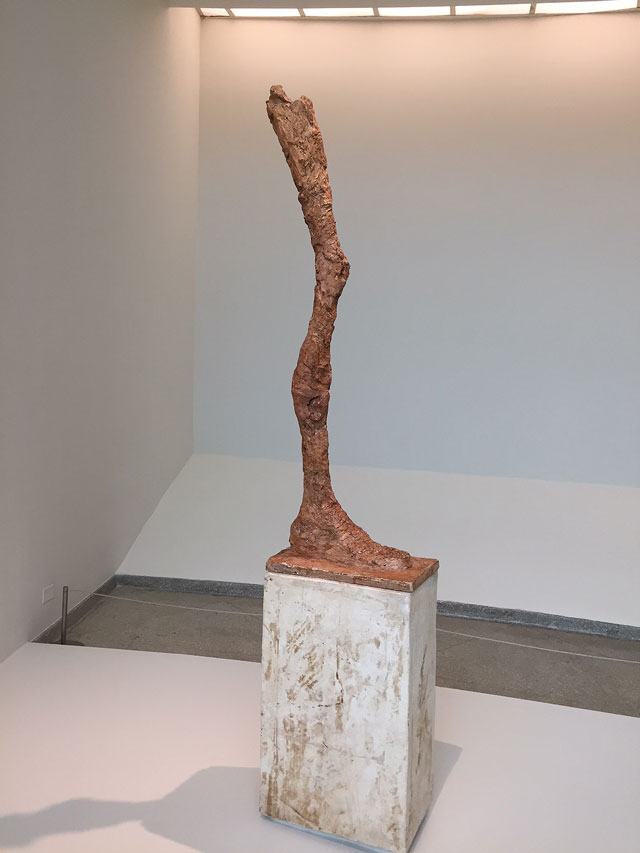 Kudos, therefore, to inhouse curator Megan Fontanella and Fondation Giacometti director Catherine Grenier for recalibrating the viewing experience from a recap to a reset with a goodly number of the foundation’s late, rarely seen, throbbing and phenomenally fragile core works undertaken and finished in the artist’s newly essential medium. Reproductions don’t prepare you for the severed monumentality of The Leg (1958), the uneasy timelessness of Stele ll (1958), the life-weary Bust of Yanaihara (l), (1960) or the attenuated sensuality of Tall Woman (ca1961).

Of no less interest, if more familiar, is the thoughtful selection of the Fondation’s drawings and paintings installed at intervals on what, but for the ramp, would present as each floor. I paused by the riff on a child’s drawing, the sketch for his sculptures, and the immaculate – in ballpoint! – studies for eyes; took time to unpack the variations on houses in Stampa and flowers with apples – pure process – but lingered longest in front of the crosshatched portraits of the artist’s friends, his devoted brother Diego and long-suffering wife Annette. How it must have unnerved the less aware sitter to watch Giacometti’s agitated brush fly about, building up a preconceived image from jittery lines that miraculously coalesced into both likeness and totem. Or didn’t. One man sat for him 400 times, with no resolution. 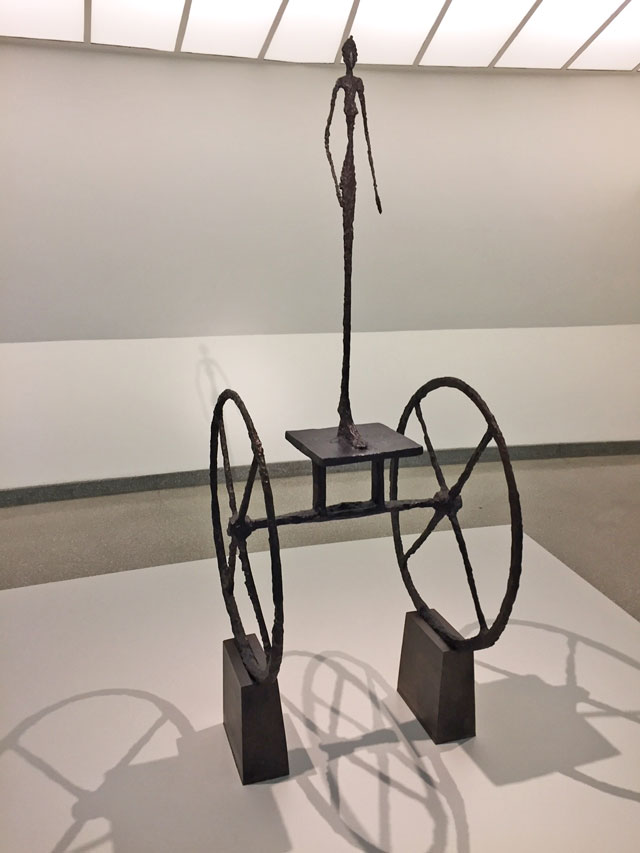 Pared down to just over 175 works, the installation moves so seamlessly from one medium to another, from figures the length of a needle to the height of a doorframe, from sketched-out ideas to fully developed painted forms and from lone figures to grouped figures linked as if in a dream by the shadows cast between them, as to lend a vital third dimension to a vision you had come to think of in two. Playing their part are the bases, often disproportionately sized to the figures they serve so as to place them more radically in the space/sensate continuum. 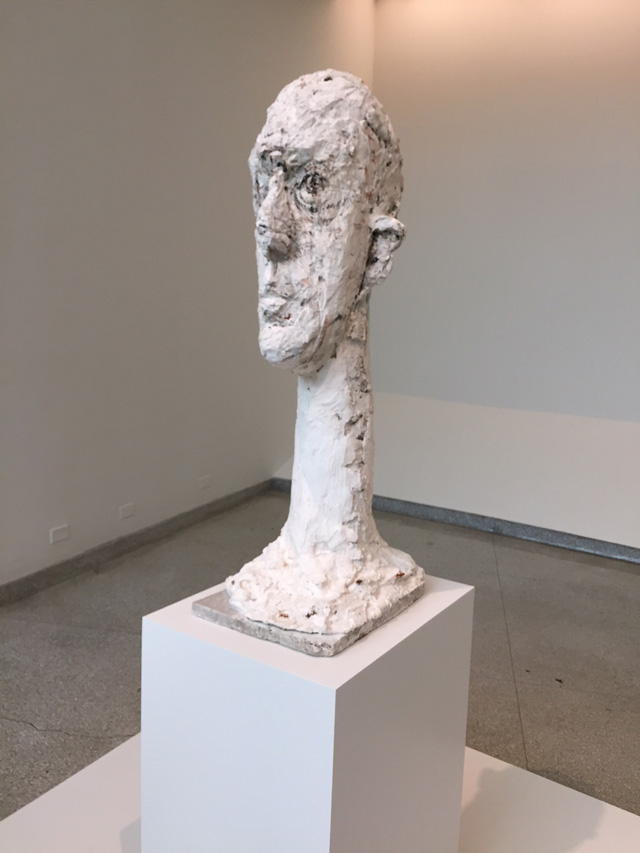 Remarkably, the big reveal is delivered on film. And, strangely, you might miss it (here my only quibble) were you to follow the ramp’s conventional ground level-to-dome, early-to-late-career installation and not make it up to the end. Better to start at the top, take a seat, and watch Ernst Scheidegger’s absorbing filmed interaction in Giacometti’s studio between the artist and his friend. 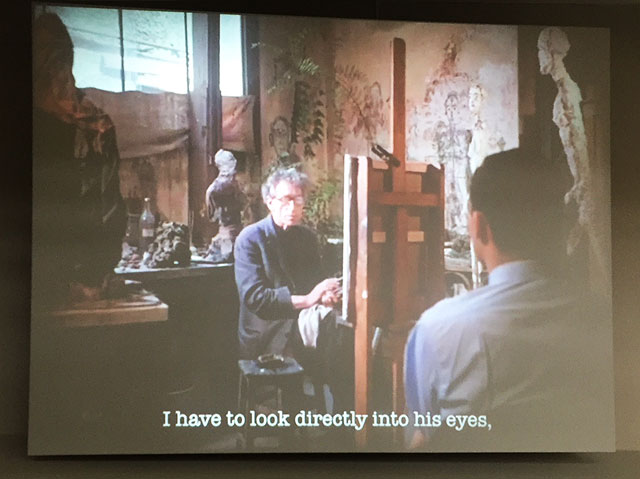 Played out over several sessions, Giacometti ekes out a dark portrait from his palette or feverishly kneads, pinches twists and tweaks nose, ears, brows and muscles to wrest a human figure from plaster. Having immersed yourself in the subsequent frenzy of drawings coalesced from fountains of lines, or of figures taken up again and again to add or subtract, you will come away with two keys to fully understanding Giacometti’s process and thereby – process, for him, being all – the finished work. 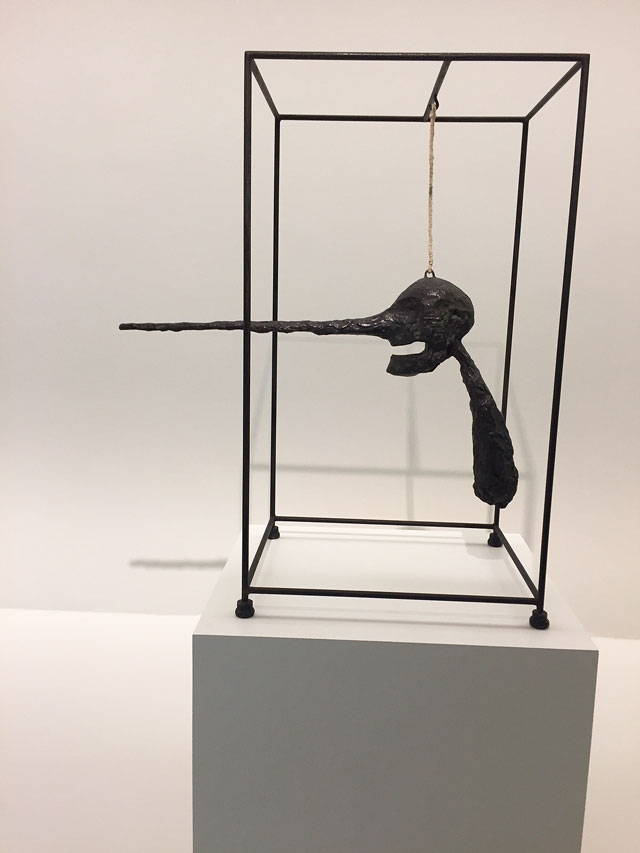 Obsessive gesture is the first. As Giacometti chats away, his thumbs and forefingers move like tiny robots programmed to realise a prefigured blueprint of the sculpture he needs to contain and, fully manipulated, reveal, the human form’s soul. Up and down, out and back, neck to shoulder, cheek to chest, the fingers fly. To the layman’s eye, it is the obsessive-compulsive behaviour of a tic, which could as easily move the piece forward or wreck it (as, by Giacometti’s telling, he often did) and whose agitated repetition explains how a single figure might take weeks, even months, to accomplish. What, you wonder, could he possibly want more from that pounded chassis than what we see on the screen is already there? The answer, this relentless reshaping of surfaces suggests, lies in the fairy dust conjured by ceaseless modelling to ultimately convert a stick figure to a man-in-full. And there, of course, lies the rub – for Giacometti the hard-won gesture – that raises a man who is walking to existential Walking Man.

The film’s second take-away is Giacometti’s assertion that each one of his figures devolves from the eyes. Watch how his pen nests a tangle of lines under the brows, and how penknife and spatula hollow out, pummel, enlarge, round or elongate the two sockets until they command every plane of the face to organically direct the movement of body and limb. “Art is the residue of vision,” he once said. Now walk down past the skinny busts and gaunt silhouettes, moving in alongside until you see them in profile, and marvel at this newly revealed window on their shared humanity. True, the traditional head-on presentation better conveys the figure in space, and the metaphysical impact of the signature works’ eerie wisp-thin, human-condition universality, but by going in sideways – or, to the drawings, so up-close that you block out ambient light – you will experience a surge of helpless emotion, a visceral flash of “I know this person”, “I am this person” recognition. 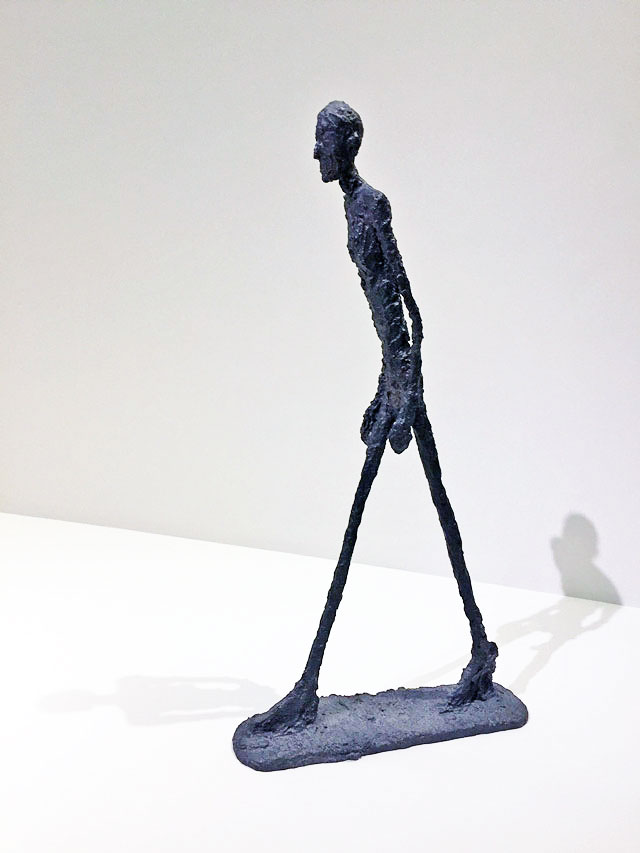 Continuing down the ramp past the all-stars – and how uplifting it is to revisit Man Pointing (1947), The Nose (1949), The Chariot (1950), and that mangy Dog (1951) – you encounter a trifecta of Giacometti’s signature bronzes. Walking Man (1947), Large Head (1955) and Standing Woman (1957) – Giacometti as brand – have been positioned side by side as envisioned in 1960 for the Chase Manhattan Bank plaza. The commission was never realised (legend has it that Giacometti was not satisfied with how the larger size had turned out, though rumoured, too, was corporate impatience with his ceaseless investigations of never-ending iterations) so Chase landed Isamu Noguchi. A fine substitute, but to get a sense of the prize it let slip through its fingers, know this: in 2011, Sotheby’s held a two-day, six-catalogue sale of collector Lily Safra’s pinnacle accumulation of everything wondrous in the world of decorative art: d’epoch bronzes, enamels, silverware, stemware, commodes, consoles, bureaux, brackets, vases, clocks, candelabra, jardinières, gueridons, secretaries, birdcages, screens, gouaches, paintings, tea caddies, trembleuses, turned ivories, petit-point cushions, needlepoint carpets, gilt-wood mirrors, Brussels tapestries, Meissen figurines, Louis XV fauteuils, Louis XVl card-tables; the Kremlin dinner service, the Orlov vermeil dinner service, the Popov dinner service, the Yusupov dinner service, the Imperial Yacht dinner service; plates made for the Grand Duke Petrovich, for the Grand Duchess Alexandra, for Alexander lll; books inlaid with cameos, ormolu mounted with tortoiseshell, ebony, mother-of-pearl – all this glory, this luxury, this history, this artistry, sold for $49m.

One year earlier, Safra had bought Giacometti’s Walking Man I, edition of six, for $104.3m.

See it here, and reflect. 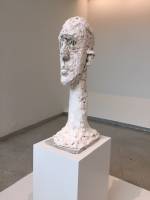 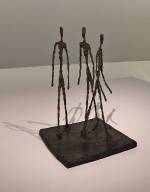 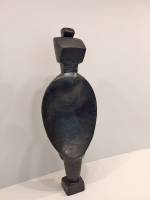