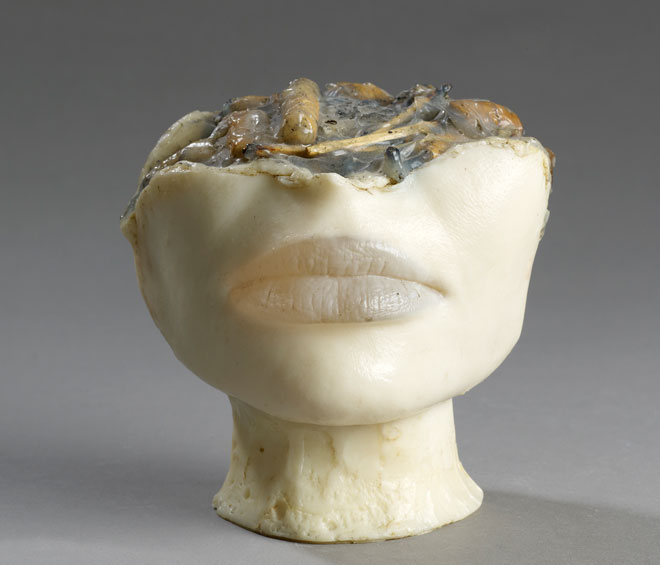 One day, near the beginning of the 1970s, the Polish artist Alina Szapocznikow (1926-73) was daydreaming in the sun, chewing on a piece of gum. “While I was pulling astonishing and bizarre forms out of my mouth,” she wrote in an exhibition text: “I suddenly realised what an extraordinary collection of abstract sculptures was passing through my teeth.” Szapocznikow took wads of gum from her mouth, stuck the masticated pieces on a plinth, and photographed the “sculptural presences” they created. 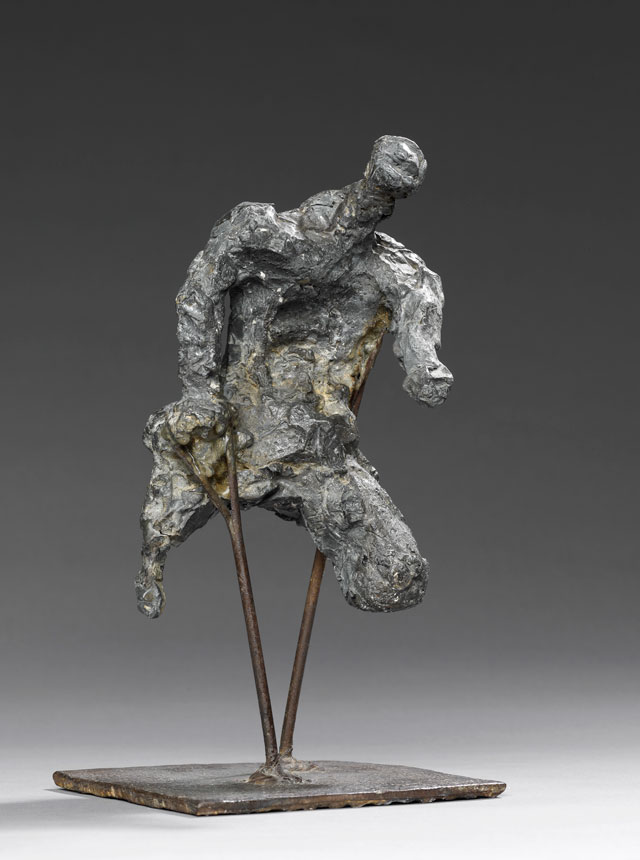 The resulting Photosculptures (1971) show pieces of the rubbery gum resembling splayed carcasses and gloopy viscera. Shot in solemn black and white, they resemble Brassaï’s Involuntary Sculptures of the 1930s, but whereas the older émigré artist had taken unconsciously rolled-up scraps of paper as his subject, Szapocznikow forged her forms in her own maw, with a substance in part defined by its malleability, its lack of definite form. These works are unique in Szapocznikow’s oeuvre, but her description of their creation reads a little like an artistic manifesto: “Chew well and look around! The creation lies between dream and everyday work.” 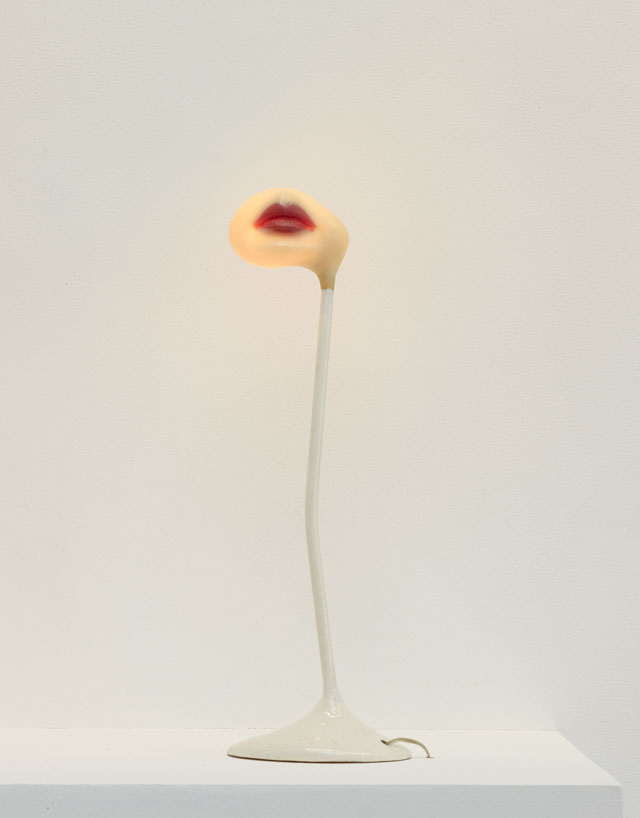 Szapocznikow’s dreams can seldom have been particularly pleasant ones. Human Landscapes, a survey of her output at the Hepworth Wakefield, abounds in crumbling masses, disjoined limbs and mounds of offal. Everywhere there are sinister composites of flesh and furniture. One piece, Dessert II (1970-71), sees a human breast placed atop an ice-cream glass, dripping like a sundae on a balmy afternoon. Her Lampe-Bouche series (1966) sees polyester resin lips serve as desk lamps, often surrounded by a pale skin-like clump. We are somewhere between the juxtapositions of the surrealists, the consumerism of pop and the lampshades the Nazis are said to have made from human skin: at once surprising, seductive and deeply sinister. As a teenager during the second world war, Szapocznikow had been interned at Auschwitz, Bergen-Belsen and Theresienstadt concentration camps; a few years later, she was struck by near-fatal tuberculosis. It is difficult not to read the scars of these experiences into her work. 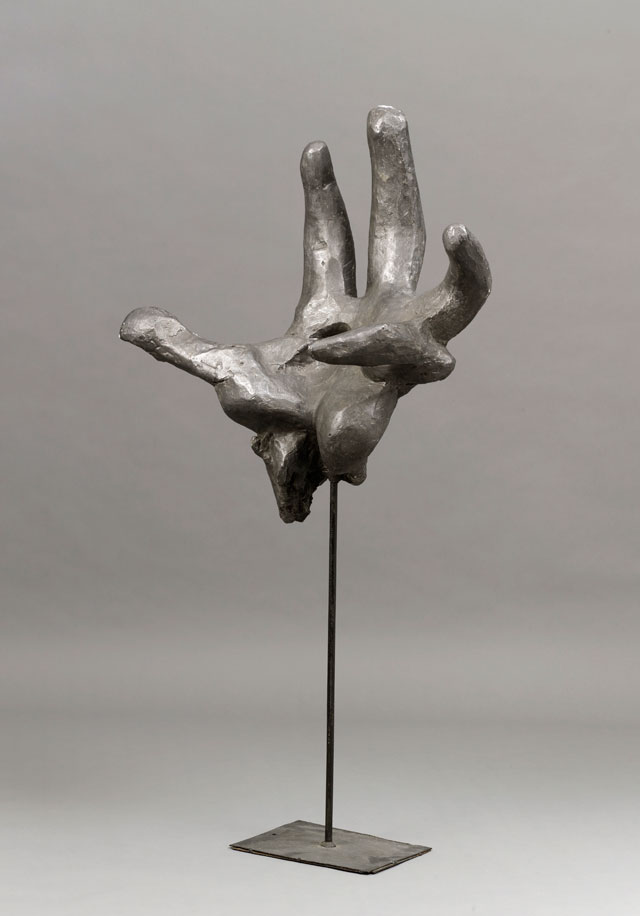 The first major period of her practice, after she returned to Warsaw in 1951 following studies in Prague and Paris, took as its starting point the state-mandated socialist realism. But even her works in this mode quickly shy away from prescribed convention. Exhumed (1957), a bronze statue of Hungarian communist politician László Rajk, is buckled and limbless, less glorious propaganda and more a reflection on the fragility of mankind. The Hand from the Monument to the Heroes of the Warsaw Ghetto II (1957) is less doughty than desperate, a humanist splinter that recalls Alberto Giacometti. By this point, Szapocznikow was already shocking the human form into something unrecognisable, as if subject to constant flux.

She moved to Paris permanently in 1963, where her practice reached its apotheosis. She discovered found objects alongside the nouvelles réalistes; pieces such as Machine en Chaire (1963-64), which incorporates car scrap, share an affinity with the likes of César and Arman. This formal experimentation continued into polyester and polyurethane resins, materials that have the curious mixture of soft-and-solid that characterises mammalian tissue – as well as the capacity for decay. 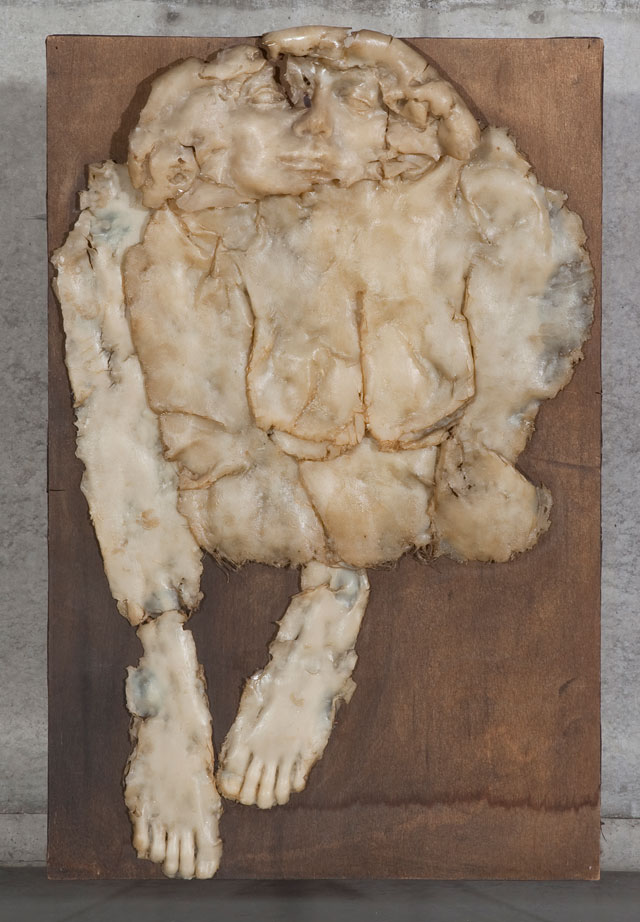 Szapocznikow was particularly concerned with the haptic quality of these materials. The polyurethane foam Belly-Cushions (1968-), cast from a friend’s body, simulate the suppleness of the stomach. When exhibited alone, they are discomfiting. When placed together in the Big Beach (1968), where they serve as makeshift sand dunes surrounding a beach dotted with finger-like protrusions, they are downright disturbing. Szapocznikow wanted to mass-produce the Bellies and sell them as design objects – a pound of flesh commodified and turned into a piece of decor. 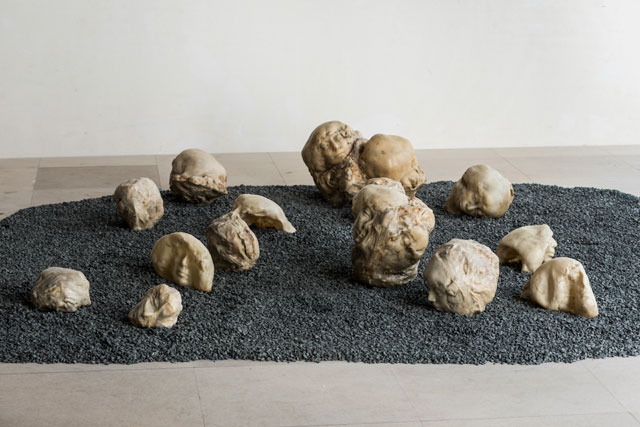 This plan never came to fruition. In 1969, Szapocznikow contracted terminal cancer. The work of her final half-decade is her most extraordinary. Simultaneously intimate and public, it is often both maudlin and celebratory. It is sometimes even slightly comic: Tumours Personified (1971) uses photographs sealed within resin to give features and personalities to the artist’s growing lumps. By contrast, a scale polyester sculpture of Szapocznikow’s adopted son, Piotr (1972), is almost unbearably poignant. Posed naked and leaned against a wall, Piotr’s form resembles that of Jesus in the Pietà, only without the mother to mourn him.

The story of Szapocznikow’s reception and obscurity is an intriguing tale in its own right. Although she never achieved major international success in her lifetime, there were moments at which she looked poised for breakthrough. Roman Polanski made a documentary about her for French television, and she had famous acquaintances outside the art world: one photograph at the Hepworth shows the nouvelle vague icon Anna Karina standing nude in her studio. In 1965, she won the Copley Foundation Prize, awarded by a jury consisting of Marcel Duchamp, Jean Arp and Max Ernst. Before her death, she was invited to exhibit at Documenta: her model Rolls-Royce II (1971), which renders the luxury car in a sensuous pink marble, is a remnant from this process. 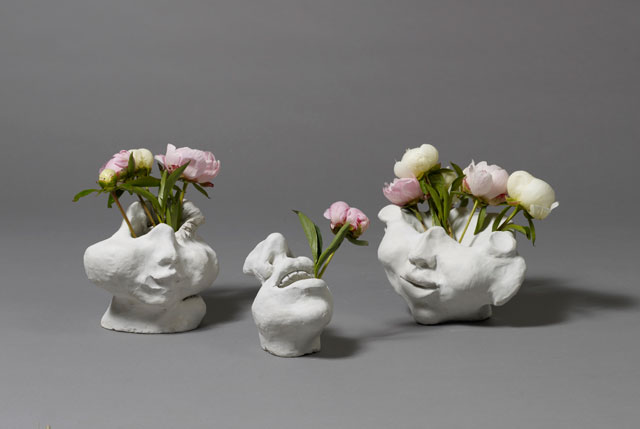 Yet the ultimate breakthrough never came, and, outside Poland, Szapocznikow was shamefully forgotten. Had she lived long, she might have received the sort of overdue recognition granted to such worthies as Louise Bourgeois and Geta Brătescu. Her premature end, along with biases against female artists and those from outside the western mainstream, allowed her work to fade. Numerous pieces have been lost or destroyed. Her present revival owes much to the Museum of Modern Art in Warsaw, which has tirelessly worked to restore her international reputation. Before Human Landscapes, there were major exhibitions at Wiels in Brussels (2011), New York’s Museum of Modern Art (2012) and the Centre Pompidou (2013). And earlier this year, a significant display of her work was among the most striking in Documenta 14.

Human Landscapes is an invaluable chance to encounter one of the most fascinating artists of her time, in every aspect of her practice. Catch it while you can – many of these works, such as Machine en Chaire from the French national collection, are too brittle to travel again. Like the bodies they depict, one day they, too, will dissolve, but Szapocznikow’s revitalised reputation should remain. 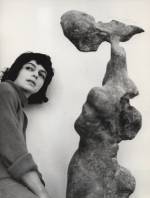 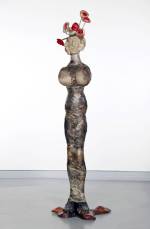 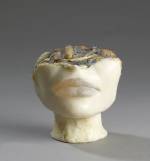