Alberto Burri: The Trauma of Painting

Alberto Burri: The Trauma of Painting

This major retrospective showcases the pioneering work of Italian artist Alberto Burri, who took up painting after being sent to a prisoner of war camp during the second world war

A must-see retrospective of Italian artist Alberto Burri at the Guggenheim Museum begins with three black-and-white narratives united by their mission to convey a specific content: a film, a text and three paintings made from transparent plastic suspended in mid-air in a small alcove gallery off the main ramp. The film is a documentary footage of smoking ruins and streets covered with debris after the allied bombing of major cities in Italy during 1943-44. It brings to mind the second world war in the language of a moving image.

The wall text reminds us general facts about the history of this period and introduces details concerning the artist’s personal participation in the events: Burri served as a medic in the fascist army in Italy and took up painting after being sent to a prisoner-of-war camp in Hereford, Texas. “I painted every day,” we read the artist saying. “It was a way of not having to think about the war and everything around me.” The three paintings hung in the gallery separated from the main rotunda are the most powerful records of the profound, transformative shock of the war experience. Made in 1962 and 1964, almost two decades after the end of these traumatic events, this sampling from the Combustione Plastiche (plastic combustion) series reveals that trauma never ends. The charred, burnt, pierced and otherwise violated pieces of plastic were made into painting by a creative act of a man who was never trained in this profession, but turned to it by default: there was simply no better way for him to live through the end of the world as he knew it.

The three-partite introduction to the exhibition – through text, film and a stark sample of art itself – prepares our rediscovery of Burri’s creative path. This process was made highly legible by the inspired and painstaking work of the exhibition’s curatorial team, headed by guest curator Emily Braun, Distinguished Professor at Hunter College, New York. The display is organised chronologically, including all 10 known series of Burri’s work as well as his early drawings. It begins at the bottom ramp of the museum with theCatrami (tars) and Gobbi (hunchbacks) series, made in late 40s and early 50s, and ends with the Cretti (images with the emphatic cracking on the surface) and Cellotex (in reference to Celotex boards, from which the paintings were made) from the mid-to-late-70s. In Gobbi, the artist was on a mission to bring together painting and sculpture, inserting objects behind the canvases to disturb their flatness. This tendency to introduce a sculptural element into painting found its further development in all Burri’s work through insertion of real materials in to the fabric of the work, including Bianci(whites), Muffe (moulds), Sacchi (sacks), Legni (woods), Ferri (irons) and Combustione Plastiche, in which plastic was scorched to attain an unusual shape and a porous, vulnerable surface.

Spanning the artist’s entire career, these series investigate possibilities of transformation of materials for aesthetic purposes in a systematic and rigorous manner. Burri’s process is revealed in a curious two-sided display of a Saccho. Because the artist worked on the support itself, he had to engage with the back of the painting as much as with the front. The difference between the front and the back shows the aesthetic choices made to maintain a clear distinction between art and non-art.

Burri’s awareness of the dominant currents in contemporary art led to a visible transformation in materials themselves and in the way he used them, despite the fact that the focus on the physicality of the painting’s support was constant throughout the artist’s career. In the immediate postwar period, his art reflected the strong influence of Jean Dubuffet and art brut in the use of raw or shapeless materials, such as tar, pumice stone or burlap bags whose unformed and uncontrolled quality was manifest in the work. From the late 50s on – in Legni, Ferri and Combustioni Plastiche – Burri turned his attention to technologically sophisticated and mass-produced materials, such as veneer, acrylic, metal and plastic.

Comparison of the early Catrami series with the late Cretti and Cellotex works reveals the logic of Burri’s practice. Although separated by more than 20 years, the cracked and uneven surfaces of the late series echo Catrami’s granular, patterned elegance in their flat, steady colouring and the emphasis on physicality of materials with which the paintings were made. If the Catrami series brings to mind the prewar abstractions of Jean Arp and Paul Klee – images seen by the artist on his trip to postwar Paris – Cretti and Cellotex demonstrate the influence of American minimalism in their use of colour as material explored through either juxtaposition of textures in a single work or dichotomous seriality. Despite the fact that both Cretti and Cellotex used identical materials – acrylic paint on a Celotex board – they differ in their conceptualisation. For example, a Cretti can be either black or white, but in it we observe a contrast between cracked versus flat surface within a single painting, making this difference the defining meaning-bearing feature of the work. By contrast, all Cellotex works are black, indicating that this series investigates the properties of material from which the work is made, rather than the difference, which is secondary. The distinction may seem minute, but is important because it forces us to think about a painting not only in terms of its visual effect, but also its semantic message. This message often gets lost, because the main effect of Burri’s work is its ability to affect us on a visual level bordering on tactile, which goes beyond verbal. He was a master of using real materials to evoke feelings and sensations that touch on the deeply personal and traumatic.

According to Braun, the idea of the retrospective was brought forward about four years ago on the initiative of the collector Isabella Rayburn, who organised the first exhibition of Burri’s work in New York in 1953. The Guggenheim Museum welcomed this initiative, not least because James Johnson Sweeney, the museum’s second director, was a personal friend and enthusiastic supporter of Burri. Although Burri has been shown in New York galleries on a regular basis since the early 50s and at the Guggenheim in 1978, the present exhibition is the most comprehensive shown so far in the US, because it includes all 10 series of his production. It also includes five drawings from the immediate postwar period that have never before been shown in public. The exhibition presents Burri’s life-long achievement in a logical and convincing manner. The inclusion of Petra Noordkamp’s film about Burri’s public project Il Grande Cretto,  in Gibellina, Sicilly, reinforced the curators’ view that Burri’s oeuvre is focused on the idea of trauma. In this project, commissioned by the Sicilian town, the artist covered the ruins of the Gibellina’s buildings, which had been devastated by an earthquake, with layers of white cement. The resulting architectural sculpture is a poignant reminder of the tragedy that caused hundreds of deaths and left a permanent scar on the memory of the local population. Begun in 1985 and completed after the artist’s death, Cretto is a testimony to the relevance and appeal of Burri’s art beyond the circle of connoisseurs and art lovers. This exhibition is a worthy tribute to an artist who built his practice around the affect. 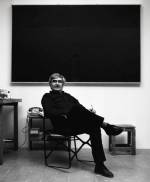 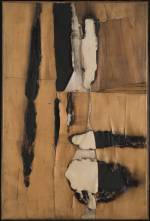 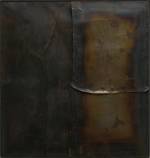 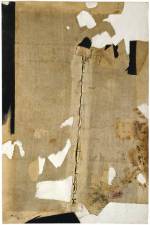 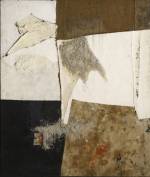 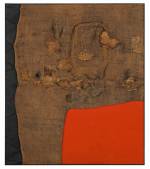 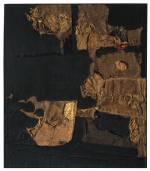