The first retrospective of Bonalumi’s sculptural exploration of canvas, colour and material since his death is nothing if not comprehensive, consolidating his place within Italy’s postwar avant garde and the influence he has exerted on subsequent artists and architects 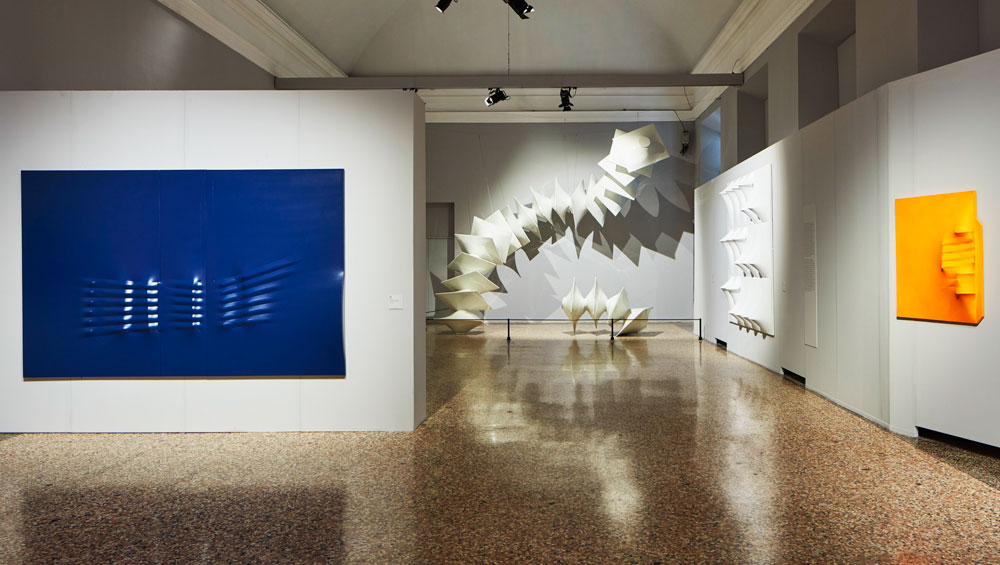 Agostino Bonalumi, who was born in Italy in 1935, is an intriguing figure: one of a pivotal group of artists in Italy’s postwar abstract art movement, his profile never quite competed with that of his friends and contemporaries Lucio Fontana, Alberto Burri, Enrico Castellani and Piero Manzoni. Nonetheless, his contributions to the collective experimentation and sculptural explorations around canvas, colour and material, have played their part in influencing subsequent generations of artists and architects, as this major retrospective shows. 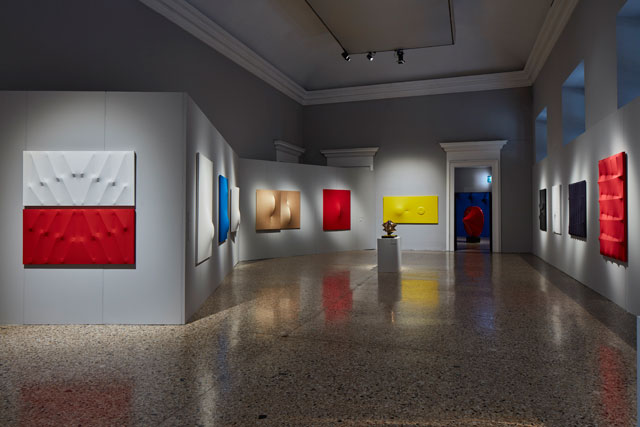 Bonalumi studied technical design and mechanics before he taught himself to paint, so it is not so surprising that he felt constrained by the flat planes of the traditional canvas. His enthusiasm for exploding paintings out of their square frame (“extroflexion”) arguably went further than any of his contemporaries; building on the canvas-slashing antics of Fontana, he developed his own style through a series of three-dimensional “pittura-oggetti” or “painting-objects” (as the critic Gillo Dorfles dubbed them). Always interested in materials, Bonalumi played with fibreglass and metal sheets coated with bright enamel colours, and stretched a material called ciré over the objects he attached to his picture frames to create those suggestive and voluptuous lumps and bumps. His interest in expanding the dialogue between art and architecture unquestionably paved the way for today’s exponents of immersive, large-scale artworks; his fondness for saturated, almost inhabitable sculptures of blue, red or black especially resonate with the sculptures of Anish Kapoor. 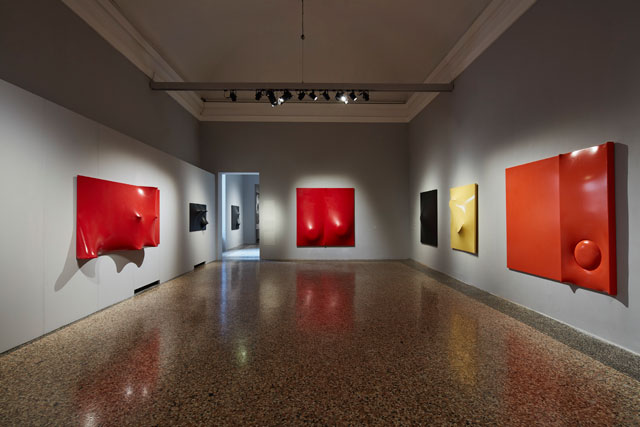 His desire to manipulate space and perception evolved into the creation of environmental artworks comprising whole rooms, where the walls might be puckered, layered and voluptuously bulging while floors could be convex or softly padded. Disorientation through unexpected perspectives, textures and forms was his aim, creating a situation “where the observers are an integral part of the experiment”, as the curator for this show, Marco Meneguzzo, has said. 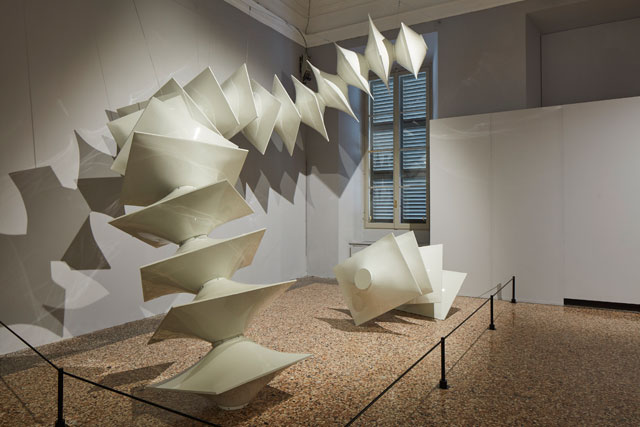 Meneguzzo was a personal friend of Bonalumi’s up until the artist’s death in Milan in 2013, and what he has assembled for us here is nothing if not comprehensive. There are 120 works, from museum and private collections worldwide. Presented chronologically, the show begins with the story of a young and struggling painter, placing him in that crucial context of postwar Europe – a time when Italy’s art scene blossomed in a spirit of post-Mussolini rebellion and youthful optimism - who was happy to trade art in exchange for dinner (much to the benefit of Trattoria all’Oca d’Oro’s owner, Pino Pomé, in whose restaurant Bonalumi, Manzoni and Castellani would meet). There are several rarely seen works from the 50s here. But it is the pieces from his period of greatest experimentation, through the 60s, that exert the most fascination, reaching a peak, arguably with his solo room at the Venice Biennale of 1970. That work, Struttura Modulare Bianca (1970), has been recreated here for the first time since that biennale, as has the celebrated Blu Abitabile (1967), an interlocking structure of 16 modular elements creating a circular, monochrome space in a room with a gently convex floor. This is the work that really put him on the map, attracting interest, especially from US galleries. Even though Bonalumi was not a pop artist, “there is something pop in there,” says Meneguzzo. 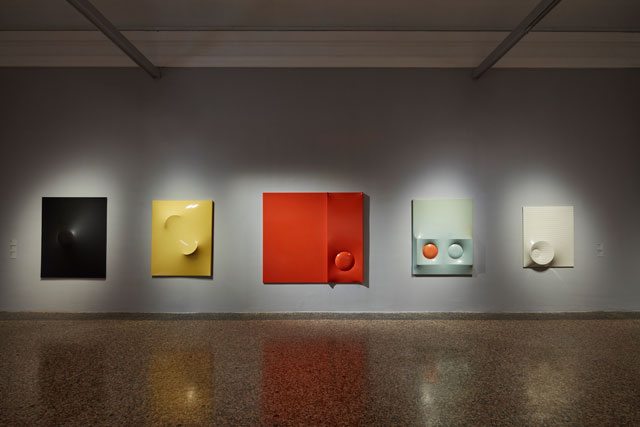 The rest of the 70s was more a period of consolidation, with regular exhibitions (including his retrospective in 1974 at the Palazzo dei Musei in Modena and his showing of Yellow to White and from White to Yellow at the Pittura Ambiente exhibition, held in 1979, in the same venue as the current show). In this exhibition, the pieces shift in tone from the surprising and sensuous forms of the 60s to the more opaque explorations of the 70s, where strange striations strain through his glossy, taut surfaces, like science-fiction fossils. 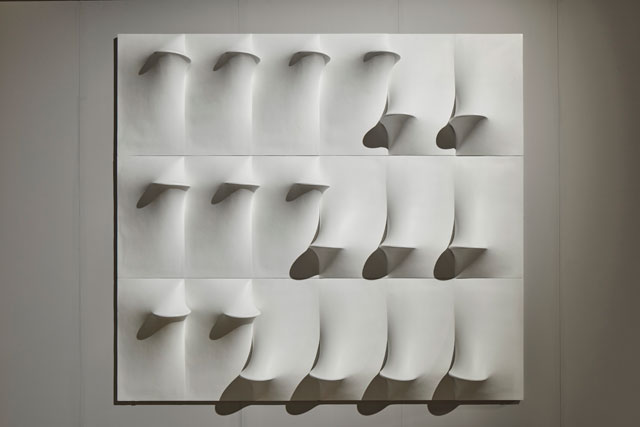 Why his profile wavered around this point is simple, according to Meneguzzo: “Until the late 1960s, he was in every important exhibition. That stopped because of arte povera. Povera was very interesting as a movement, but also it was like … a poison for every other thing.” However, interest in his work continued, and in 1981 he took part in the Italian Art: Four Contemporary Directions exhibition at the Fort Lauderdale Museum of Art in Florida, and in 1986 participated in the 11th Rome Quadriennale and the 42nd Venice Biennale. 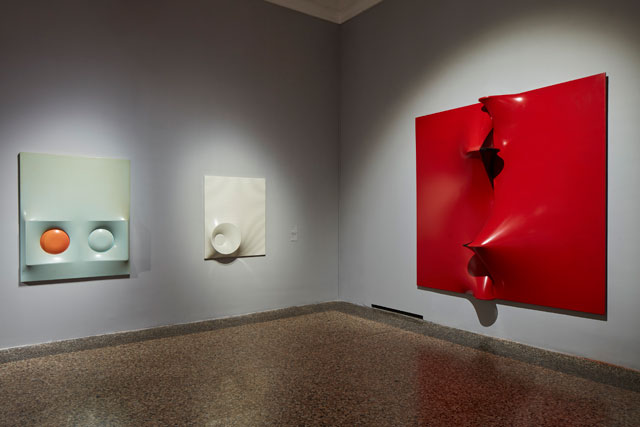 Regardless of the shifting tides of fame and fortune, Bonalumi continued to work right up until his death. And when the groundbreaking work of this core of 60s pioneers, from Bonalumi to the Zero group and the restless, inspirational experimentations of Fontana, were reappraised in the 90s, the slow rehabilitation of Bonalumi’s contribution and legacy began – with Meneguzzo as key advocate. As one of Milan’s own sons, it is fitting that the first really comprehensive retrospective should be here, at the Palazzo Reale, whose opulent architecture forms a lavish counterpart to Bonalumi’s vivid, tactile, geometrically intriguing forms. As Meneguzzo says: “It’s an ancient palace, not a white cube, luckily.” 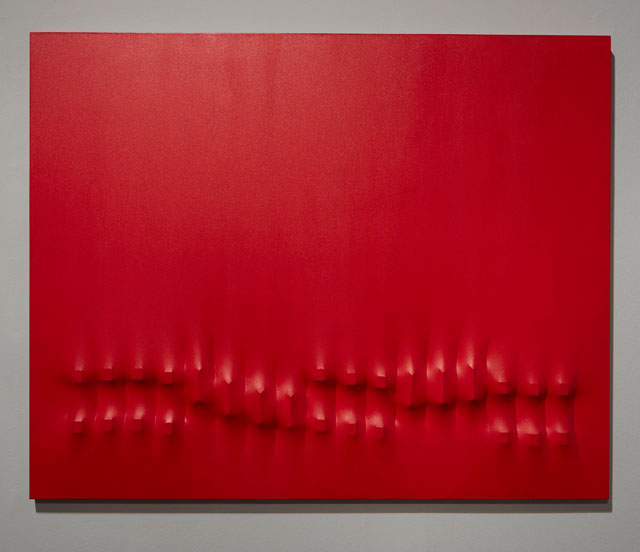 Certainly the reaction to the show so far indicates that Meneguzzo’s faith in this artist has been justified. While the freshness, intensity and exuberance of the early work is a revelation, so are Bonalumi’s later, works – such as Rosso (1991), Blu (1992) and Nero (1998). Here, wire forms writhe and bulge as if trying to break free of the glossy, thickly applied acrylic on the canvases, demonstrating a new fluidity and confidence from the artist in his maturity. 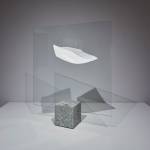