Anish Kapoor is the man behind one of the most expensive public sculptures in the world - the US$23 million, 33-feet high, 110-ton polished stainless steel curved plate called 'Cloud Gate' (2004), which is located in AT&T Plaza in Millennium Park, Chicago.1

Now, Kapoor has surprised a crowded audience in São Paulo, Brazil, with his declaration, 'I hate public art'. The occasion of his provocative statement was the opening of the artist's exhibit, 'Ascension', and the subject was an equally provocative work of the same title. Kapoor inserted his comment into a lecture in the Centro Cultural Banco do Brasil (CCBB), where he showed eight works. But the focal point of the show, the public artwork 'Ascension', was shown in the middle of the street.

Kapoor explained that what is often meant by the label 'public art' is more closely related to 'a decoration in front of a building' rather than a genuine consciousness of space. To Kapoor, this misunderstanding has always been a challenge because, in most cases, the art object made for a public place is planned as an independent entity. The relation between artistic creation, the architecture and environment is not taken into account. According to Kapoor, the conception of a public artwork must be connected to issues concerning the 'space outside' and should not be confined to the object itself.

São Paulo is the final stop on Kapoor's successful tour of Brazil, which began in August 2006. Before reaching São Paulo, the travelling exhibit, Kapoor's first in Latin America, had been seen by more than 500,000 people in Rio de Janeiro and in the Brazilian capital, Brasília. To view the centerpiece of the show in São Paulo, visitors must exit the CCBB and walk through the streets of the business centre of the metropolis. Passing old buildings and homeless people, they eventually arrive at the work, enclosed in a pavilion created for the 'non-material' sculpture. The work consists of a column of smoke that, by forming a tornado, arises from the street under the Viaduto do Chá (Chá Viaduct) and reaches to the very base of the bridge through the action of a suction fan.

At the CCBB, visitors saw the only film made by the artist, 'Wounds and Absent Objects' (2003); three installations; two large sculptures; and a series of small sculptures. Kapoor and Brazilian curator Marcello Dantas selected the works on view. Dantas suggested the placement of 'Ascension' under the Viaduto do Chá. Kapoor said that as soon as he heard about the social problems and history of the site, he knew it would be a powerful setting for 'Ascension.' At the beginning of the 20th century, the district around the viaduct was a thriving locale. In the Eighties, the area declined and became a magnet for drug dealers, black market operators and prostitution. Homeless men and women gravitated toward the bridge, seeking shelter beneath it and conferring to the site an image of urban decay.

According to Kapoor, the choice of the site resulted in a significant change in the work. In Rio de Janeiro, 'Ascension' stood 36 metres high and was placed in the central foyer of an imposing building. It created a sensation, perhaps connected to the notion of a non-tangible reality. The title also evokes religious belief and tradition.

In the first exhibition in Rio, the work explored abstract themes addressing the 'physicality' of the non-material object. In São Paulo, although of smaller and less astonishing characteristics, the work captures aspects of the despair and decay evident in this part of the city. The artist takes visitors to a place that is avoided and forgotten by the mainstream. Here, Kapoor can engage the poor inhabitants of the neighbourhood with the work, projecting the possibility of the work remaining for an undefined period. He hoped to establish, he said, a 'feeling of belonging' among the people.

Kapoor also said he trusts in the 'intimacy' that a work of art can produce between the viewer and the work. In his opinion, a stunning work of art, located either in a public or private space, must be able to move the spectator into a unique experience. A remarkable sense of intimacy is established in São Paulo through 'Ascension'. The paradox of a column - a symbol of rigidity - made from wind may be the most astounding feature of the show, but the works on view at the CCBB also expand public awareness.

For example, the film 'Wounds and Absent Objects', a homage to Kapoor's hero, American abstract expressionist Barnett Newman (1905-70), suggests a deep journey from colour to darkness; on the screen, viewers see a single-coloured image, very much like one of Newman's painting, that shifts from brighter to darker shades. Moreover, the installation 'Double Mirror' (1997-98) generates a visual confusion in which the viewer cannot recognise him- or herself in the mirror image. 'Untitled' (1998) provides another startling optical illusion: at 4.5 metres, the work is a golden metal canoe-like structure. The polishing induces the doubt: does the work have a concavity or is it a solid structure? Only after gazing at the sculpture for a while can one discern the answer.

The installation consisting of two sculptures, 'When I am Pregnant' (1992) and 'Sister Piece of When I am Pregnant' (2005), challenges in a different manner. Initially, some visitors do not see anything when they enter the room. What they finally see is a pair of forms that appear on a white wall, one large concave shape and one large convex shape. Eventually, this technique establishes the intimacy in which Kapoor places his trust, and many viewers find it difficult to obey the sign warning them 'please do not touch the art works'.

It is clear, then, that Kapoor's strategy in São Paulo is to expand the notion of public art. To do so, he harnessed the power of the 'spirit' of the city. A common public image of São Paulo is as a great South American metropolis filled with contradictions: a city both rich and poor; a modern city with a dark side; and a city with many people but little intimacy. In this setting, Kapoor's elusive, non-material sculpture feels like a temple. The real force of the work is in what the eyes cannot see and what the hands cannot touch. It is where a sensation of 'ascension' is produced far beyond ordinary perception.

'Ascension' is part of the Ascension exhibit, which opened on 29 January 2007 at the Centro Cultural Banco do Brasil (CCBB) in São Paulo, Brazil, and in the Ascension Pavilion under the Chá Viaduct (Viaduto do Chá). The exhibit closes on 1 April 2007.

Footnote
1. In 1999, the artist was selected to work 'Cloud Gate', Kapoor's first public work in the USA. It took him five years to finish. Originally estimated at US$6 million, the budget increased for a total cost of US$23 million. Over the time that Kapoor worked on it, the sculpture acquired the shape of an immense drop of mercury in liquid. The final result was a colossal object, seen in the surface reflecting the image of pedestrians together with the skyline and skyscrapers of Chicago. 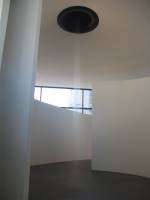